B-36 bombers at the Davis-Monten base, 1958. In the future they will be disassembled as unnecessary

A few days ago, the United States Air Force announced the return to service of the B-52H bomber with serial number 60-034. This machine was built back in 1960 and served until 2008. Then it was in storage for several years, and in 2019 its restoration began. The return of the aircraft to service was made possible by the work of the Davis-Monten base and the 309th Aerospace Maintenance and Repair Group.

Immediately after the end of World War II, the United States faced the problem of using and storing aircraft. The army no longer required huge quantities of such equipment, and its disposal did not always make economic sense. In this regard, in 1946, at the Davis-Monthan base (Tucson, Arizona), a storage area for B-29 bombers and C-47 transport aircraft was organized. It was assumed that this technique, if necessary, could be returned to service.

The Davis-Monten base was chosen to store equipment for a number of reasons. This airfield is capable of receiving even the largest aircraft. It is located at an altitude of 780 m above sea level in an area with occasional rainfall and low humidity. The flat landscape of the area is formed by alkaline soils, characterized by high hardness and bearing capacity. Thus, any aircraft or helicopter can be overtaken to the Davis-Monten base, solid ground makes it possible to dispense with the construction of parking lots, and the dry climate protects equipment from corrosion. 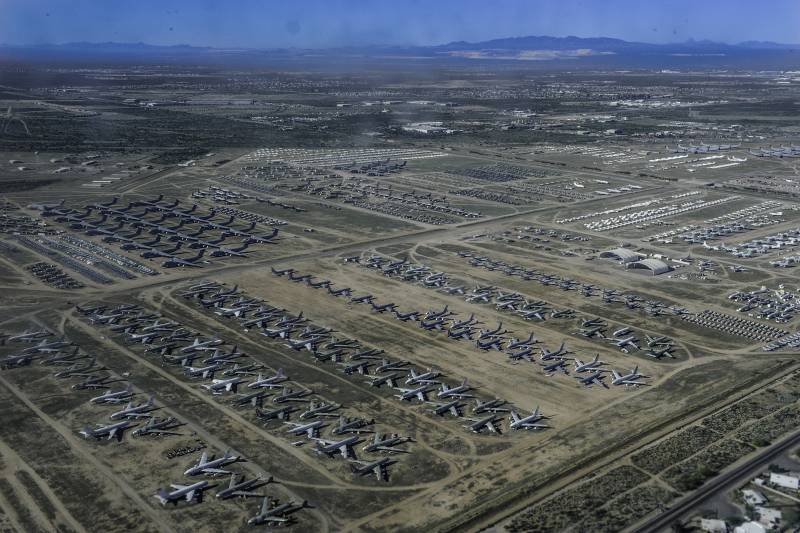 Until 1965, there was another storage base in Arizona, used for the interests of the Navy, the ILC and the Coast Guard. However, in order to optimize it, it was closed, and all functions for the conservation and storage of aviation equipment were transferred to the units of the Davis-Monten base. This state of affairs continues to this day. At the same time, the Air Force and other structures have several bases responsible only for cutting decommissioned equipment.

Currently, the 309th Aerospace Maintenance and Regeneration Group or 309th AMARG is responsible for the work with the decommissioned materiel. Since 2012, the group has been part of the Ogden Air Logistics Complex, which solves the problems of service and support. 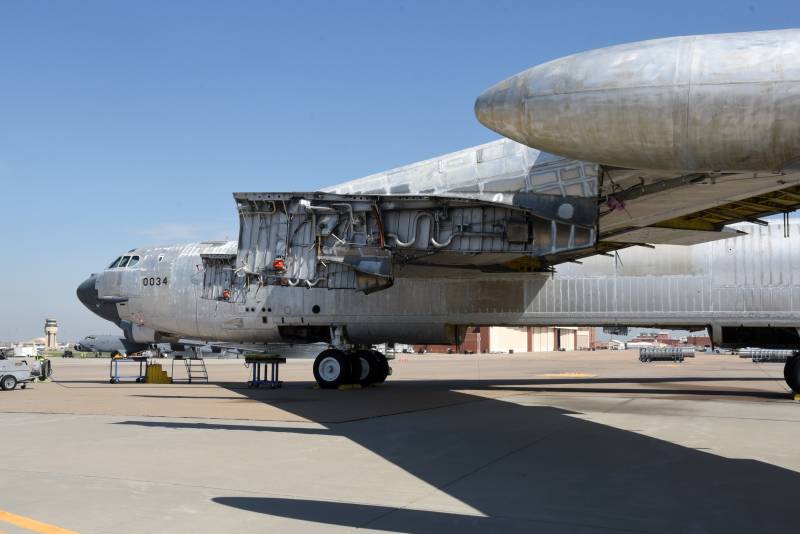 At the disposal of the 309th group at the air base there are several hangars and storage facilities for working with aircraft, placing various equipment, etc. At the same time, the most famous is the field of storage of aerospace equipment, where, in fact, the preserved products are located. The total area of ​​the “possessions” of the 309th group is approx. 11 sq. Km. The department employs approx. 700 people, mostly military. The territory of the base is closed for visits, but until recently, bus excursions were carried out together with the neighboring museum.

The 309th AMARG is responsible for the storage of any aeronautical and space technology operated by all US government entities. First of all, we are talking about airplanes and helicopters of the main types. According to various sources, there are now at least 4400-4500 aircraft of different classes and types, as well as tens of thousands of units, elements of production lines, etc. on the base.

The incoming aviation equipment is assigned one of four categories that determine further work and storage features. Categories “1000” and “2000” provide for the conservation of equipment for long-term or short-term storage. In the future, this technique can be restored and returned to the combat unit. Category “2000” provides for the disassembly of the machine for parts with the removal of units and assemblies suitable for repairing the same type of equipment. The “4000” category includes products that are to be sold abroad. 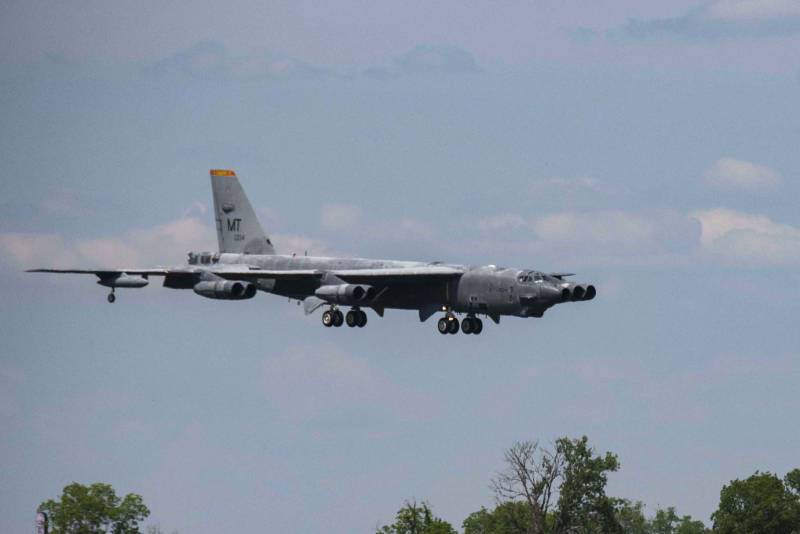 The same aircraft after repair and modernization, February 2021.

In most cases, incoming aircraft undergo general conservation procedures. This process begins with the dismantling of pyrotechnic devices and classified equipment. In addition, the propeller blades are removed from the equipment – if available. All liquids are drained, and then the equipment is cleaned of all external and internal contaminants. In particular, the fuel system is flushed with a preservative oil that forms a protective film.

After that, the joints, hatches, etc. are sealed, and then the plane or helicopter is covered with a special polymer compound and / or covered with a cover. Thanks to this, the technique does not overheat in the hot climate of Arizona and maintains the required condition for a long time. The prepared sample is transferred to its place in the storage field.

In some cases, it is possible to change the conservation procedures. For example, B-52H strategic bombers are in storage partially disassembled. In accordance with international agreements, wings or tail sections of the fuselage were dismantled from them. Fighter-bombers of modern types are preserved according to their own procedure, with the expectation of the possibility of restoration within a few days. 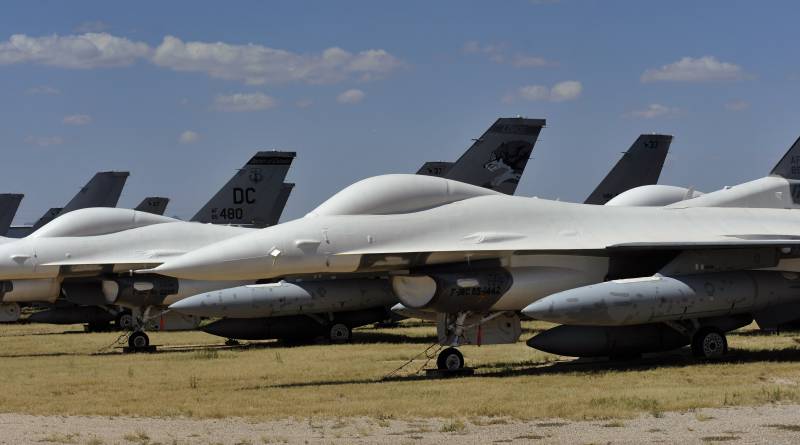 F-16C parked. Surfaces exposed to the sun are coated with a special polymer

Depending on the orders received, the 309th AMARG can scraop a no longer needed aircraft or disassemble it for parts for transfer to repair departments. Also, there are frequent cases of de-preservation with the subsequent transfer of materiel to the aircraft plant for further restoration and repair. These are the procedures that B-52H s / n 60-034 underwent in the recent past.

Based on considerations of optimization and economy, the Air Force and other structures of the US Army are constantly reviewing the required number of formations and units, as well as the equipment for them. In addition, the rearmament processes do not stop. All this leads to the release of significant quantities of equipment and units that are still usable. These planes and helicopters arrive at the Davis-Monten base, where they undergo the necessary procedures.

The presence of large stocks of aviation equipment, incl. of current types, allows you to replenish combat and non-combat losses, as well as ensure the rapid equipping of newly created or restored units. In addition, equipment from storage can be restored and modernized for sale abroad. 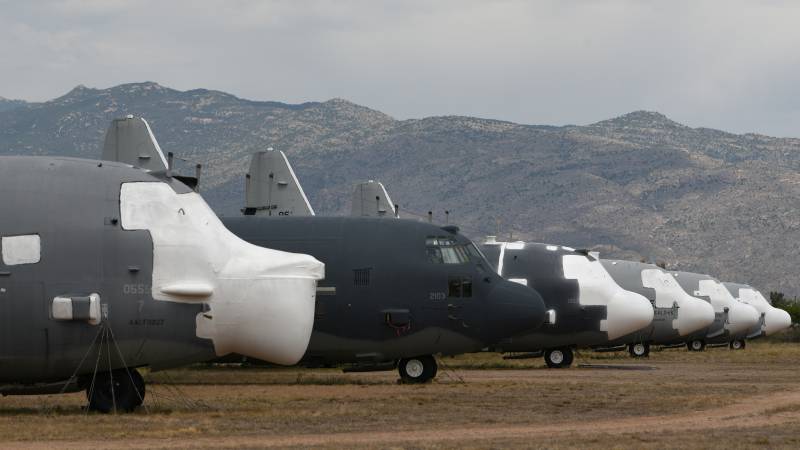 Disposal of unnecessary equipment instead of conservation and the subsequent construction of new ones would lead to unjustified losses of money and time. Moreover, in some cases, the restoration of production is simply impossible. This is especially evident in the case of the B-52H bombers – they have not been produced since the early sixties, and the restoration of the existing fleet is carried out only at the expense of the Davis-Monten base.

One of the main functions of the 309th group is the dismantling of canned equipment. The withdrawn units and devices are used in the repair of other machines and are returned to operation for further use of the remaining resource. This leads to additional savings in the production of new units.

Up to 250-300 aircraft and helicopters arrive at Davis-Monten each year to be stored or dismantled, reportedly. Depending on the current plans of the Pentagon and the availability of foreign contracts, up to 80-100 units are returned to operation. equipment per year. We are also talking about thousands of components and assemblies returned to operation after dismantling.

In general, the existence of the storage base and the 309th group is associated with issues of economy. Mothballing and dismantling for parts allows you to reduce the cost of maintaining an active fleet of aircraft without any loss in efficiency. At the same time, more than remarkable results are achieved. For example, 309th AMARG proudly claims that every dollar spent on its activities saves the budget $ 11. 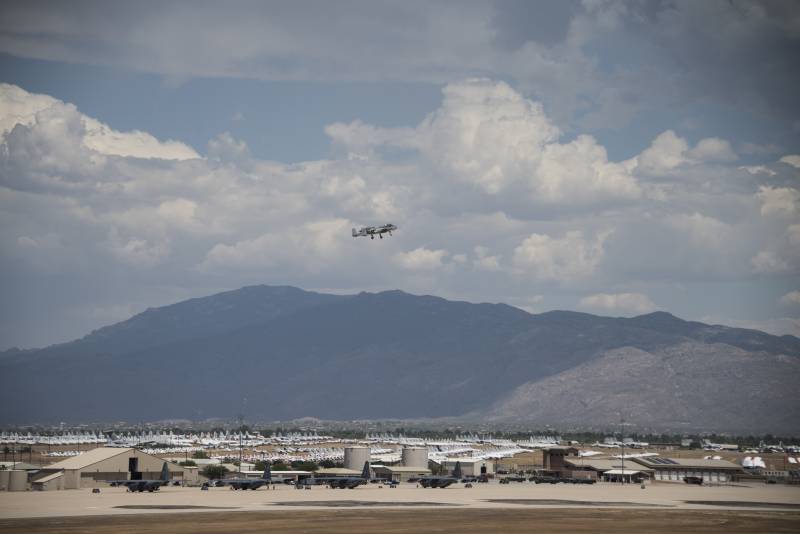 Other structures are also adopting the positive experience of the Pentagon. For example, Mojave Airport in California not only provides air transportation, but also provides storage space for commercial aircraft. Various attempts to create such bases were made in foreign countries, but in most cases it was about sedimentation tanks for equipment to be cut. One of the reasons for this is the lack of sites with a suitable dry and hot climate.

A well-developed system of conservation, storage and restoration of aerospace equipment, incl. older types, currently only available in the United States and built around a single Air Force facility. Recent decades have shown that this is sufficient to meet the challenges and achieve the required economic and operational benefits. Therefore, it should be expected that the 309th group for maintenance and repair of aerospace equipment at the Davis-Monten base will continue to work in the future and ensure the implementation of all plans of the command – from maintaining the condition of its own fleet to selling equipment to foreign partners.