Model BMP-3 with a new version of the “Epoch”. Photo Vitalykuzmin.net

Promising 57 mm cannons are increasingly used in domestic projects of armored combat vehicles. Not so long ago it became known about the installation of such a weapon on the Kurganets-25 infantry fighting vehicle, then photographs of such a complex appeared, and now it is being prepared for display on Red Square. This version of the BMP can be of great interest both to our army and to foreign customers.

Early versions of armored vehicles on the Kurganets-25 platform were first shown five years ago. On May 9, 2015, vehicles in the configuration of infantry fighting vehicles and armored personnel carriers with combat modules of two types passed through Red Square. The BMPs were carried by the Epoch / Boomerang-BM remotely controlled combat modules (DUBM) with a 30 mm automatic cannon. In the future, the possibility of equipping the Kurganets-25 with other combat modules with different weapons was repeatedly mentioned.

In 2017, for the first time, they showed mock-ups of armored vehicles BMP-2 and BMP-3 with a new version of the “Epoch”. It was distinguished from the existing DBM by another gun and an additional missile launcher. Even then, the composition of the armament was announced and the main advantages were named.

In November last year, Defense Minister Sergei Shoigu said that on May 9, 2020, the Kurganets-25 vehicles with a new version of the Epoch DBM will take part in the Victory Parade. Just a month later, an exhibition was held within the framework of the collegium of the Ministry of Defense, at which a similar product was present. “Epoch” with a new cannon and rocket armament of different types were demonstrated separately from the carrier. 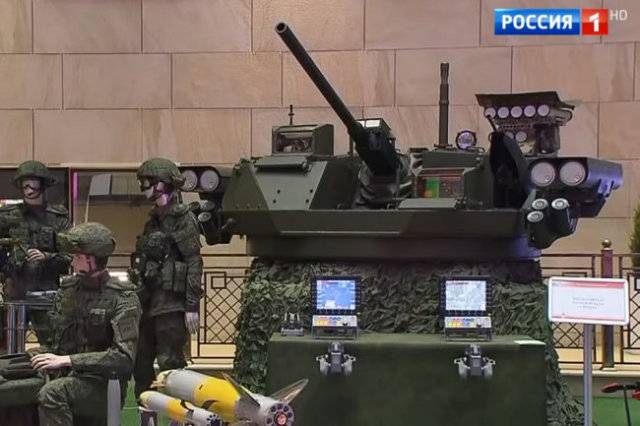 Demonstration of the combat module, December 2019. Shot from the reportage of the All-Russian State Television and Radio Broadcasting Company

In March 2020, photos from the first rehearsals of the future parade were made available. Among other types of equipment, they were attended by the BMP “Kurganets-25” with a new version of the “Epoch”. Previously, such armored vehicles did not fall into the lens of photographers. The first public screening was supposed to take place on May 9, but it was postponed to June 24.

The new version of the Epoch DBM under the 57-mm cannon is similar to the previously created product, but there are significant external and internal changes. They are associated with both the replacement of the gun and the introduction of fundamentally new systems. All these measures made it possible to increase the combat characteristics and expand the capabilities in comparison with the base product.

The main and most noticeable novelty is the LSHO-57 automatic cannon (“Light assault gun, 57 mm”), created at the Central Research Institute “Burevestnik”. It differs from the well-known 2A91 used in the Baikal DUBM family, it differs in a shorter barrel length (about 40 klb) and the absence of a muzzle brake. This design leads to an increase in the height of the trajectory of the projectile, which required the development of new ammunition. Several products of this kind were shown for the first time last year, together with the DBM and its cannon.

With the “short” 57-mm cannon, unitary shots of several types are used, characterized by a shortened sleeve. High-explosive fragmentation and armor-piercing ammunition has been proposed. The dimensions of the projectile in the future allow you to create a programmable fuse. 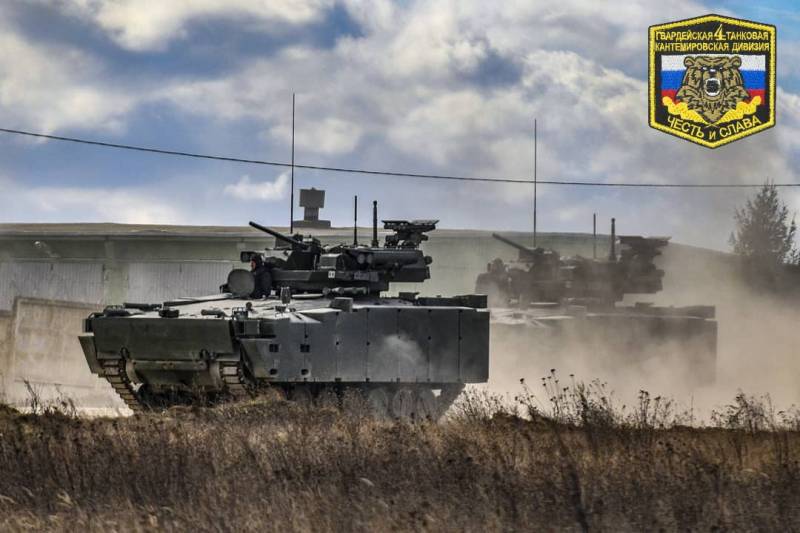 BMP “Kurganets-25” with new weapons at the rehearsal of the parade, March 2020 Photo Vk.com/4kantima

The coaxial machine gun in the swinging block is again used. The Kornet missile launchers and smoke grenade launchers are retained on the sides of the DBM. In the aft part of the tower, a niche is provided for a retractable launcher for the Bulat light missile system. The combat module, shown last year, carried a unit with 8 transport and launch containers – two rows, 5 and 3 units.

Despite the replacement of weapons, the fire controls have generally remained the same. DUBM has two sights, for the gunner and the commander. Unified control panels with instrument blocks, monitors and control handles are mounted at the crew’s workplaces. Probably, the replacement of the gun did not require a serious update of the FCS – only new software was needed, taking into account the different ballistics.

The basic version of the Epoch DBM, equipped with several weapons of different classes, could hit a wide range of targets at different ranges. The updated version of the module is distinguished by wider capabilities of this kind – this is ensured by replacing the main weapon and installing additional missiles.

A PKTM machine gun of normal caliber is still used to destroy manpower and unprotected equipment or structures within a radius of hundreds of meters. The most protected targets, such as tanks or fortifications, at maximum ranges of up to 8-10 km are hit by Kornet ATGM missiles with different combat equipment. 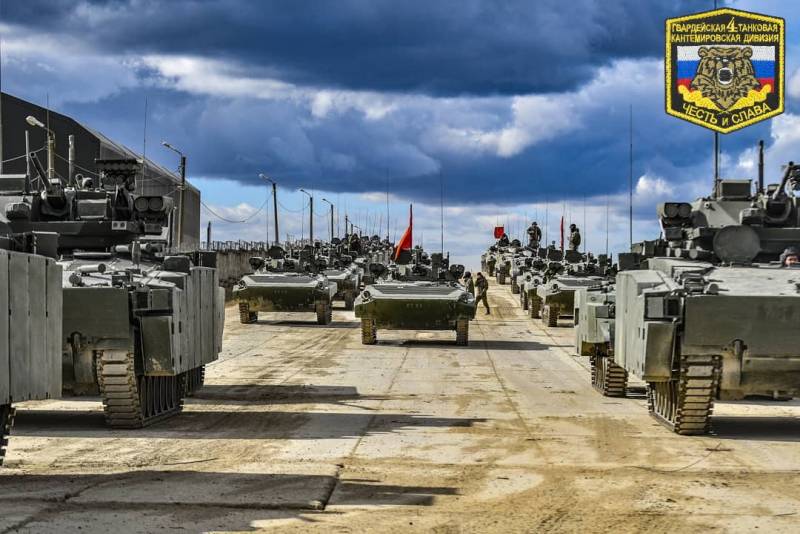 Parade line. In the foreground – “Kurgantsy”, behind – BMP-2 with the combat module “Berezhok”. Photo Vk.com/4kantima

The new LSHO-57 cannon compares favorably with the usual 30 mm caliber 2A42 in terms of its main characteristics. Despite the decrease in ballistics in comparison with the alternative model of its caliber, it surpasses small-caliber systems in terms of firing range and ammunition power. There is also the possibility of hitting targets protected from 30-mm systems with an armor-piercing projectile. At the same time, effective destruction of manpower and other “soft” targets is ensured at increased ranges and with an increased radius of destruction by a high-explosive fragmentation projectile.

The Bulat missile system is proposed as an addition to the Kornet and LSHO-57 and should occupy an intermediate niche between these systems. The small-sized missile has advantages over the 57-mm projectile in the form of targeting capability, longer range and warhead size. At the same time, it is cheaper, more compact and simpler than a full-size missile of the Kornet complex. Thus, advantages of a technical, combat and economic nature are achieved.

The first demonstration of the updated “Epoch” on Red Square will take place with the help of the BMP “Kurganets-25”. Moreover, such a tracked platform is not the only potential carrier of the new DBM. So, exhibition layouts arr. 2017-18 showed the fundamental possibility of installing the “Epoch” on old-model infantry fighting vehicles. This allows them to seriously increase their combat characteristics and provide a certain superiority over a potential enemy. 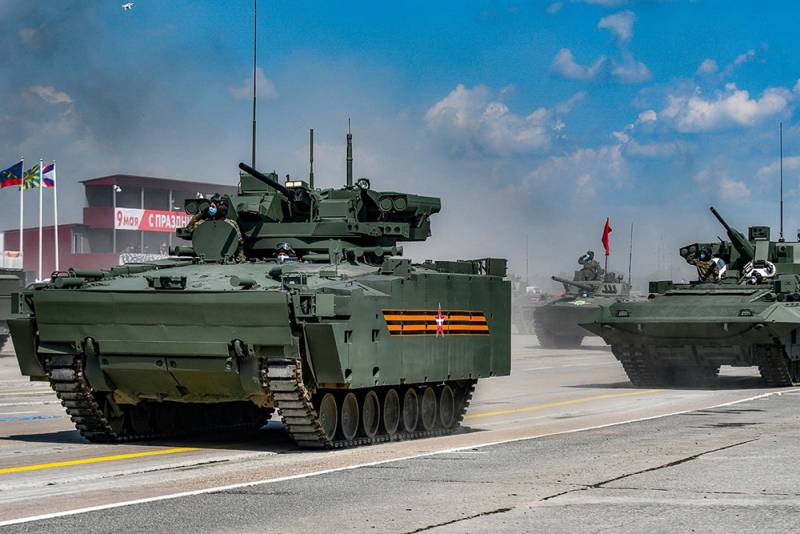 Rehearsal for the Victory Day Parade, June 2020 Photo by the Ministry of Defense of the Russian Federation

However, the focus is on new designs. “Kurganets-25” with “Epoch” is already ready to be shown. In the recent past, the industry has mentioned the possibility of installing such a DBM on the Boomerang wheeled platform. However, samples of this kind have not yet been shown to the public. They may not have even been made yet.

It should be recalled that the “Epoch” with LSHO-57 is already the second DBM with an increased caliber gun. Before him, the AU-220M “Baikal” family of systems appeared with a long-barreled 57-mm cannon. These modules have been installed on a wide variety of platforms. For example, two variants of machines with “Baikal” are taking part in the current parade – TBMP T-15 and anti-aircraft self-propelled gun “Derivation-PVO”.

Waiting for the future

To date, the first versions of armored vehicles on the Kurganets-25 platform have reached state tests. The necessary checks will be completed in the near future, after which the start of mass production and development in the army is expected. Apparently, armored personnel carriers and infantry fighting vehicles with artillery systems of old types will be the first to enter service.

The current state of affairs in the new project “Epoch” remains unknown – as well as the timing of the completion of the work. The situation is similar with other developments of the promising direction of 57-mm guns. There are a number of armored vehicles with such weapons, but none of them has yet reached combat units. However, the technique is already being demonstrated on Red Square, which may indicate serious success and progress.

The introduction of “Baikal” and “Epoch” into mass operation will lead to the most interesting results in the context of combat capabilities. The same applies to technology on new platforms. The newest BMP “Kurganets-25” and T-15 with the new version of the “Epoch” DBM find themselves at the intersection of two most important directions – and soon the army will be able to use all their advantages. In the meantime, the public is invited to get acquainted with the new technology in the parade.