Today, the number of drones in the hands of users around the world is measured in tens of millions of units. Small flying devices no longer cause much surprise among city dwellers. Drones help to shoot panoramas, are used to prepare wedding videos and time-lapses from a height, and are used in advertising photography. At the same time, in the wrong hands, even such relatively small drones can pose a danger to people. And it’s good if everything is limited only to shooting girls on the beach.

Drones are also dangerous in the hands of terrorists, as they can carry explosives or banal fragmentation grenades, radioactive materials, chemical or bacteriological weapons.

It is no coincidence that in recent years, the use of drones is strictly prohibited at all major sports and social and political events. For example, the ban on the use of drones over sports facilities will be observed at the next Summer Olympics in Tokyo, which was supposed to take place back in 2020, but was postponed to 2021 due to the coronavirus pandemic.

One of the relatively simple options for countering drones are special signal jammers. On the creation of electronic and optical countermeasures for small unmanned aerial vehicles, made in mobile or portable versions, today they are working in many countries of the world, including Russia.

In our country, such developments are represented, for example, by the products of the Avtomatika company, which is part of the Rostec state corporation. The specialists of this company have created a wearable anti-drones complex called Pishchal-PRO.

Outwardly, the device resembles samples of although futuristic, but still recognizable small arms.

This is a kind of “gun of the future” that would not get lost on the set of any science fiction film. The futuristic appearance hides the completely earthy capabilities and features of the new weapon.

Pishchal-PRO is designed to suppress communication channels, control and navigation of drones. At the same time, people without special training can also use this weapon. It can always be applied in real time, successfully neutralizing small quadcopters and tactical reconnaissance equipment of the enemy. 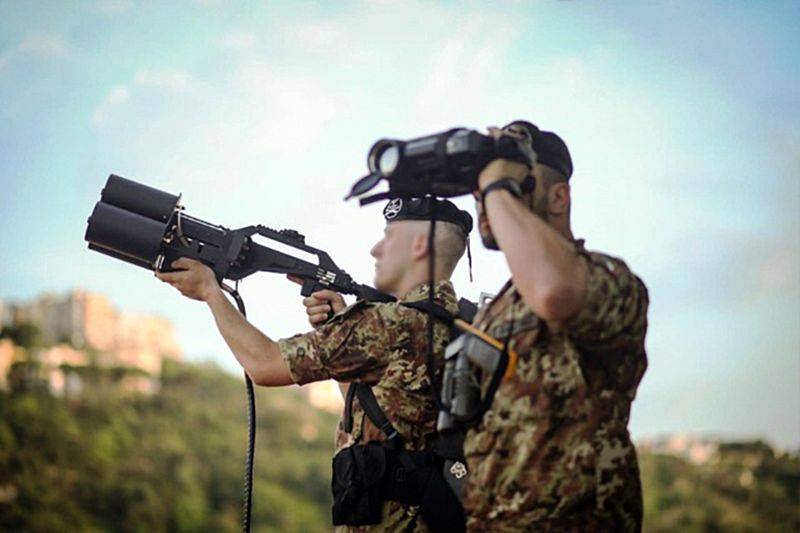 Similar developments exist today in many countries of the world.

In Italy, CPM Elettronica is working on the creation of such systems, not only mobile or portable, but also stationary, capable of fighting large drones.

One of the developments of this company is the CPM-Drone Jammer anti-drone gun, which received the DJI 120 4B manufacturer index. This anti-drone gun can be used by the military, intelligence agencies, security forces, as well as civil organizations and companies to prevent access to certain objects or territories.

The devices developed by CPM Elettronica, as well as the products of the Russian company Avtomatika, are able to protect certain areas from unwanted intrusion by drones or small tactical UAVs using radio signal jamming technologies.

Interest in the creation of such countermeasures is due to obvious factors. First, the market for civilian drones, as well as for military products, has grown exponentially in recent years. Second, the drones have become too easy to fly.

Today even a schoolchild can cope with this task, and the emergence and improvement of autopilot systems based on GPS or other positioning systems makes it possible to plan missions and flight tasks for such devices. This poses a potential hazard and threat to densely populated areas of cities or important areas, industrial facilities and infrastructure.

Moreover, the threat is not always terrorist. Uncontrolled flights of small drones can pose a threat to the operation of airports and to the safety of passengers, interfere with the work of rescuers and rescue equipment, and carry out illegal surveillance and surveillance.

In addition, drones are popular with criminals who use them to deliver contraband across borders or prohibited goods to prisons. All this required the industry to develop adequate and simple countermeasures, one of which was anti-drone guns.

It is known that the device is in service with the Italian Air Force, in particular, the 16th regiment for ground defense of air bases. For air bases, the task of detecting and neutralizing enemy drones (even the smallest ones) is quite acute. Such devices fly at low altitude and are small in size; it is quite difficult to shoot them down with small arms or automatic cannons.

The danger of small drones and drones, including home-made ones, is confirmed by the experience of the Russian air base Khmeimim operating in Syria. According to the Russian Ministry of Defense, over a hundred different militant drones have been shot down over the base in several years. At the same time, not only the air defense forces of the base were used for this, but also the available means of electronic warfare – electronic warfare.

Developed by Italian engineers from CPM Elettronica, the anti-drone system is a compact and transportable system.

The way the CPM-Drone Jammer works is to suppress radio signals that not only control the flight of the unmanned vehicle, but also are sent from its board (video and photo data, if the device is conducting reconnaissance). At the same time, the weapon does not directly interfere with the operation of the drone’s mechanics, the engines and propellers are still working, but the device itself hangs in the place where it was overtaken by the effect of the radio signal jammer.

In addition, the device is capable of disrupting GPS operation. The creation of electromagnetic noise at the radio frequencies that the drone operates at, while jamming the GPS signal, often causes the quadcopter to make a normal landing in place while performing a vertical descent. Thus, the interception of the device is carried out, which will be available for further study and investigation.

The compact and transportable system, made of impact-resistant CFRP, includes four silencer circuits that are able to effectively interrupt the most common communication signals between drones and operators / GPS, avoiding drones hitting targets or blocking their actions over unmanned zones.

The CPM-Drone Jammer works with four GAN Technology Power Amplifier Jamming Modules (30W each) in the 20 to 6000 MHz frequency range.

The anti-drone gun has directional antennas with high signal gain. According to the developers, one set of four devices is enough to effectively intercept about 30 drones.

At the same time, the declared effective interception range of unmanned aerial vehicles is 700 meters. The total length of the shotgun with antennas is approximately 900 mm. The entire system, including battery, backup battery and antennas, weighs 17 kg. 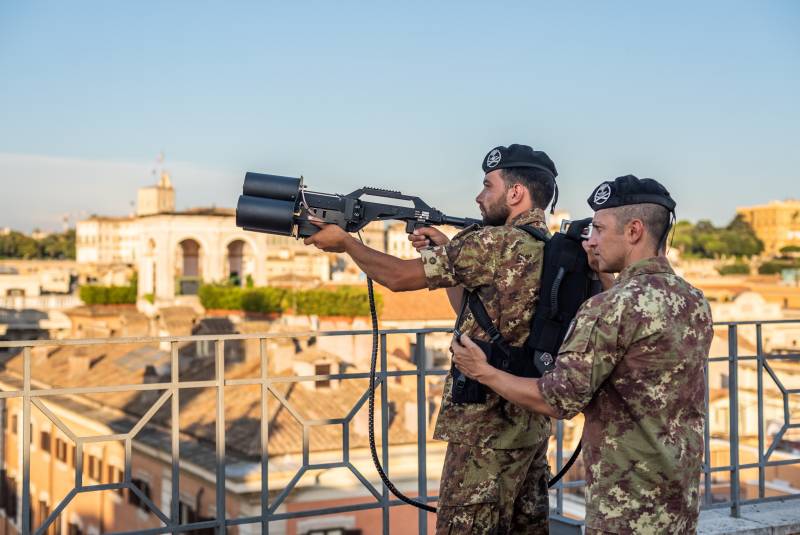 The anti-drone gun developed by the Italians is powered by lithium batteries type BB2590, two batteries are included in the package, as well as a charger for them.

In standby mode, the gun can work up to 20 hours, in active mode at full power – 1 hour. At the same time, the range of application specified by the developer is designed for warm and hot climates.

The device operates in the temperature range from 0 to +55 degrees Celsius.

In winter, in cold weather, it will not work.