The celebration of the 60th anniversary of the Victory in 2005 was planned to be widely celebrated. As a highlight, it was decided to take the veterans across Red Square in the legendary ZIS-5V. And not on a couple of vehicles following the T-34-85, but immediately as part of ten “boxes” of 12 vehicles each with a commander’s truck at the head. Total – 130 ZIS-5V, which prudently required 10 spare vehicles. 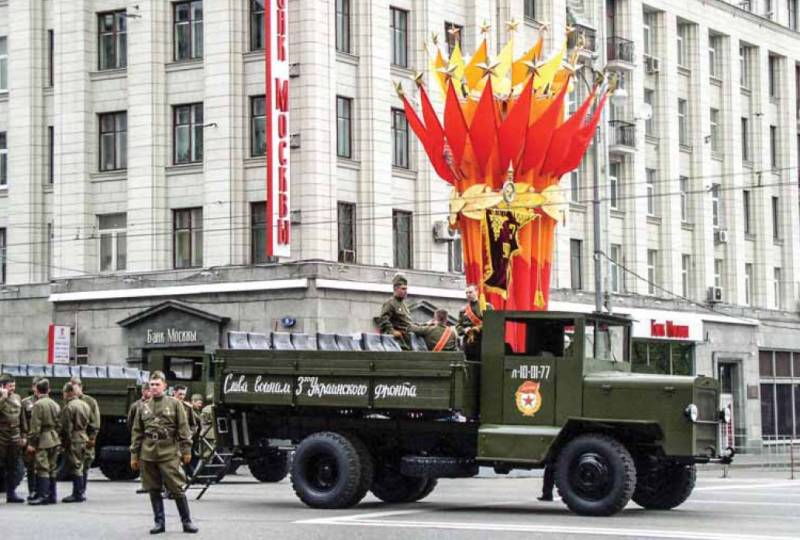 Naturally, there was not such a large number of wartime trucks, and even capable of overcoming Red Square without breakdowns. In total, there were no more than ten ZIS-5s in normal condition. Therefore, it was decided to build trucks from scratch, more precisely, on the basis of existing models.

The idea, as we can see, was initially very good: on the anniversary of the great Victory, solemnly transport veterans in front of world leaders on retrocopies of wartime trucks. However, this idea came to the minds of the management too late, in October 2004, which, of course, did not imply the production of copies of the ZIS-5 close to the original. Igor Lysak, head of the ZIL experimental research corps, recalls:

“It all started when the management asked us:“ Pick a model on the basis of which you can create a car similar to the ZIS-5 at minimal cost ”. “Bychok” is not suitable for these purposes – it means that the “big ZIL” remained. The very first sample of the “retro-ZIS” was shown to the management of the plant and representatives of the Ministry of Defense in early February: they approved the car, but advised to make a number of changes. “

In fact, the very first sample was shown back on November 24, 2004, and it inspired a slight horror. According to Alexander Lazarev, who worked at that time as a design engineer at AMO-ZIL, the replica of the ZIS-5V looked more like a hippopotamus and frankly smacked of “collective farm” tuning. Then they did not even dare to show the car to the military and began to redesign the layout.

Initially, the truck for the parade was built on the basis of the six-ton ​​ZIL-432930, from which the cab was dismantled, replacing it with a metal roll frame sheathed with 10-mm plywood. The emblems of the Stalin plant on the radiator grill were even cut out of plywood. And all would be fine, but the layout of a modern truck differs a lot from cars 60 years ago. First of all, this is the ZIL cab, pushed onto the front axle in order to increase the useful length of the cargo platform. Accordingly, the motor also moves forward, going beyond the base of the truck. Everything in the ZIS-5 was much more elegant, since it was still built according to the classic recipe with the wheels set far ahead and the engine in the base. Now, not even all passenger cars are designed this way, let alone trucks. There was neither time nor money to carry out the rearrangement of the civilian ZIL, so they had to sculpt a kind of glorified “three-ton” from a six-ton ​​truck. Obviously, the opinion of the veterans, who still remembered the original cars, was not particularly interested in either the factory workers or the military. 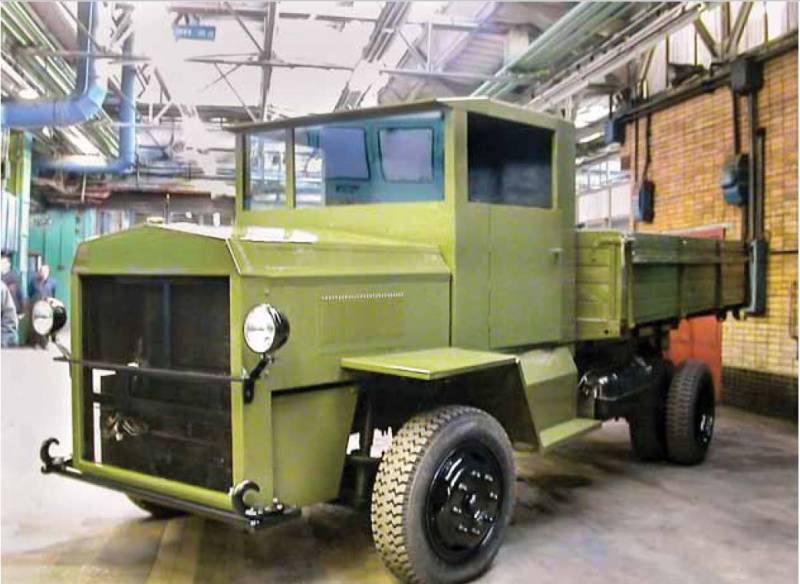 The haste in which the machines were designed and built inevitably affected the quality of the ZIL-4328AP (this name was given to the “ceremonial” cars). Eyewitnesses say that the welds on the tubular frame were rough, and the gaps between the doors and the cab were finger thick. The car lacked side and rear windows along with the inner lining. However, the ZIL products of those years and in serial performance did not differ in special quality. But the entire mechanical part underwent a separate check of the quality of performance – the Ministry of Defense was the last to expect failures during the Victory Parade. All 140 cars had to be produced by March 2005, so that there was still a month left for training drivers in synchronized driving.

I must say that “retro-ZISs” were assembled by almost the entire AMO-ZIL plant. In the model workshop, the elements of the cab were made, it was assembled in a new body case, and the whole car was made out in the car assembly building, on the head conveyor of the plant.

After the November failure, when a clearly crude layout was shown, engineers and assemblers approached the modeling of the replica’s appearance more carefully. They put a narrow radiator, conjured over the equipment of the diesel engine, which made it possible to narrow the hood to the radiator grill. They abandoned the bumper, leaving only the characteristic towing fangs, but even they were not able to spoil the already useless appearance of the cabin. And the “cherry on the cake” were installed more graceful doors in order to bring the proportions of the 6-ton truck closer to the “three-ton”. We managed by the end of January 2005 and immediately put the updated truck on a vibration stand for the “three thousandth” (this is about kilometers) test. In the course of “shaking”, two modes were simulated: movement on a smooth road surface and a profiled cobblestone imitating Red Square. The cabin made of pipes and plywood withstood vibration tests, and on February 3, the ZIL-4328AP was presented for military acceptance.

Oddly enough, I liked everything, they only asked to remove the handrails on the sides of the body and build them up with another board. The military did not bother (they say there was a major general and a colonel) that the replica of the domestic Victory truck was more similar to the German Magirus and Vomag of the early and mid-30s of the last century. That is, created under the rule of the Nazis! And in each such “pseudoZIS-5” it was supposed to put 20 veterans – for this, the seats were borrowed from the “Bychkov” buses. Landing was provided through the tailgate by means of a ladder with a handrail, which was then pushed into the body between the rows of seats. By the way, the trucks not only with honor should have taken the participants of the war across Red Square, but also delivered after the holiday to their place of residence in the city. 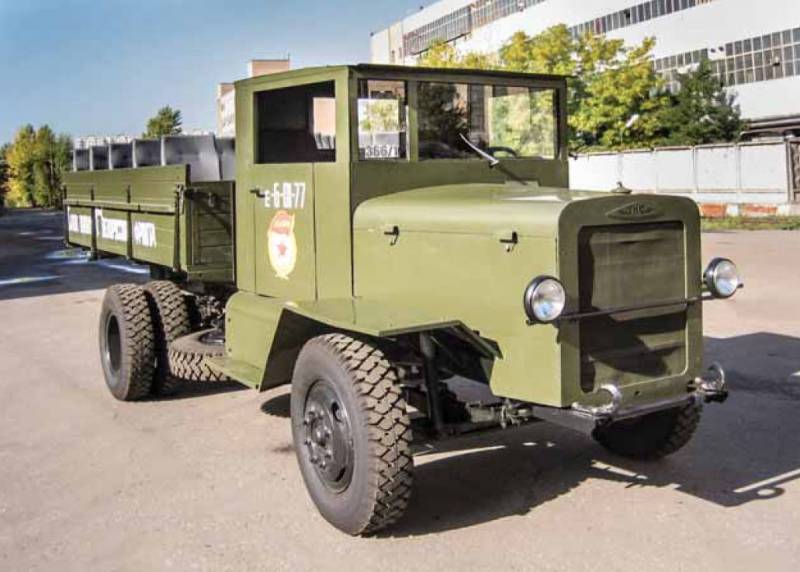 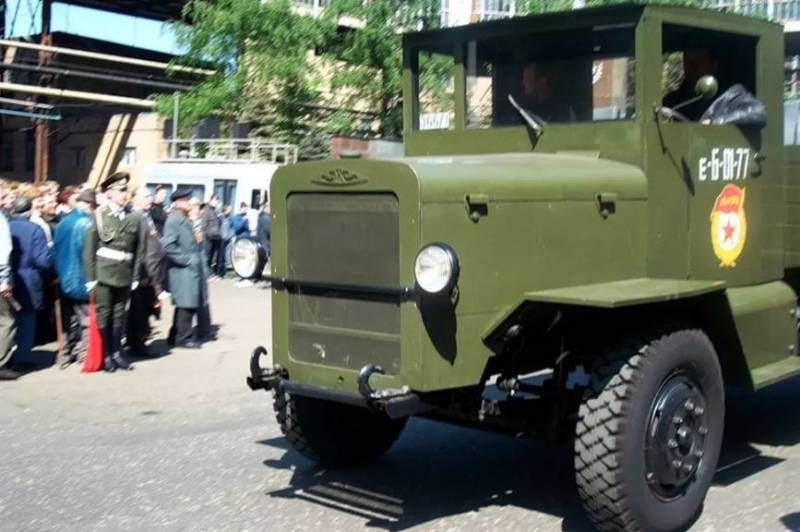 Veterans of the Great Patriotic War first saw the creation of the hands of automobile plants even before the holiday: on April 29, a traditional parade was held at ZIL in front of the monument of Glory to the heroes of the war. Then for the first time ZIL-4329AP for the first time and took on board the participants in the war. The car appeared before the workers and employees of the plant, invited servicemen of the Presidential Regiment, cadets of the military technical school with a brass band. It is not known for sure, but perhaps after that, the newspaper “Moskovsky Avtozavodets” described the impression of the novelty:

“On a cursory inspection, the car resembles the German Magirus or MAN heavy trucks of the late 1930s and early 1940s.”

The Zilovites themselves did not deny the obvious similarity with fascist technology! 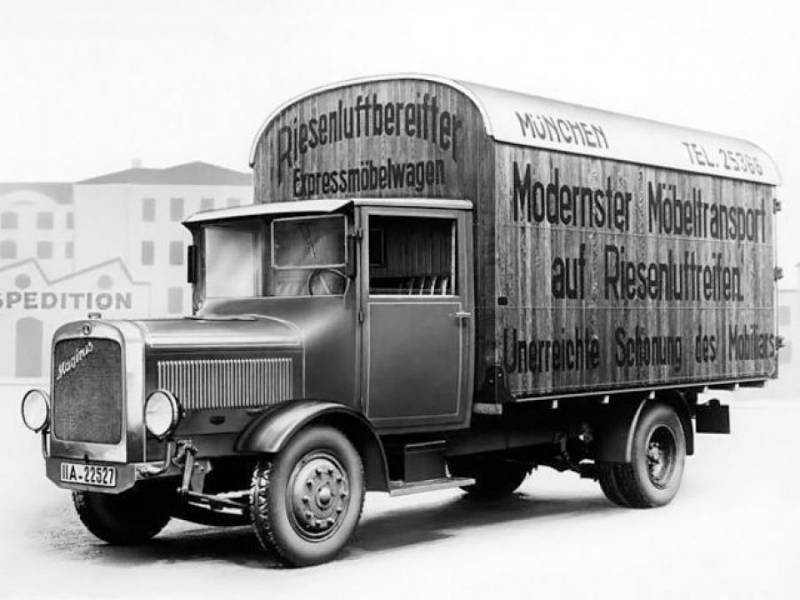 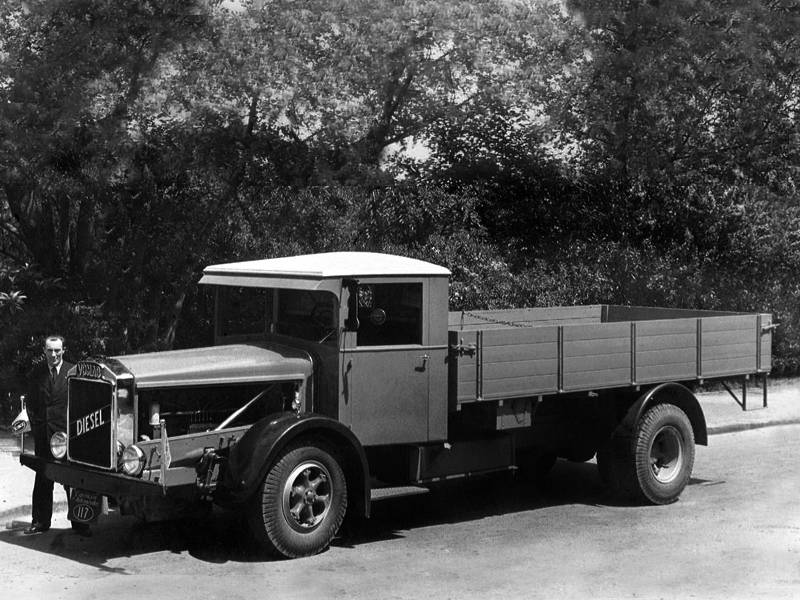 After the plant produced all 140 machines, they went to Teply Stan to their permanent base, and the pre-parade trainings were routinely held at Khodynskoye Pole. During the Victory Day parade, information appeared out of nowhere that trucks stylized as a GAZ-AA lorry were driving along the pavement. This is because it was impossible to unambiguously determine the belonging of the resulting miracle. However, the mayor Luzhkov in one of his interviews called the three-ton ZiSy “one and a half lorries in which we won.” Maybe this is what caused the strange rumor.

As if ashamed of their own creativity, after the parade, the factory workers dismantled almost all the “retroZIS” and returned them to the original form of the donor ZIL-432930. The fact is that contact with the Ministry of Defense did not imply the buyback of 140 trucks, and after the restoration of the vehicles, they were sold. According to available data, only three cars remained alive after the 60th anniversary of the Victory: in the Ryazan Museum of Military Equipment, in private hands and on the territory of the plant. The last one, with the inscription on the back “Glory to the soldiers of the 1st Belorussian Front”, was destroyed in 2014. 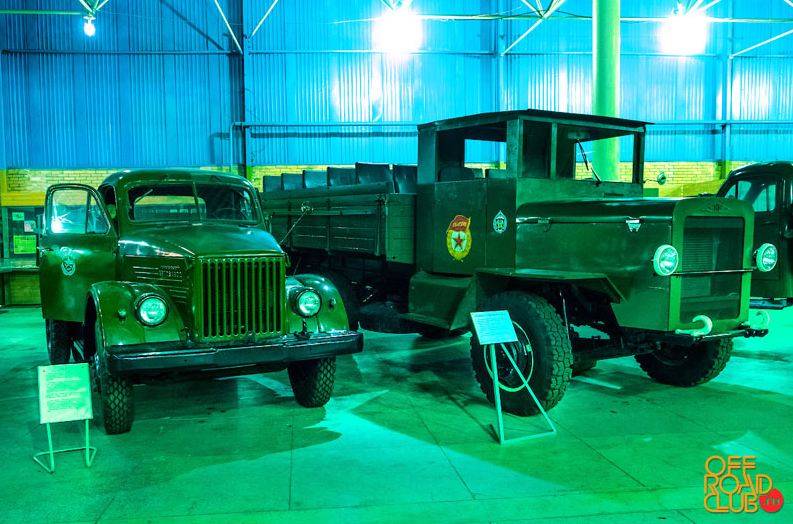 “We wanted the best.” This is how you can briefly retell the story associated with the construction of ceremonial replicas of the ZIS-5 for the 2005 Victory parade. And after the retelling, a lot of questions arise …

If initially it was clear that it wouldn’t work well so quickly, why didn’t they change the trucks? After all, it was possible to assemble a collection of ZIL-157 and ZIS-151? Or were they too much like Lendleigh’s Studebakers? If so, why not bring the veterans in the usual Urals with honor? And there would be no less symbolism here. In the end, it was possible to turn to GAZ, maybe they would have turned out a lorry and a half more adequately.

Having no competitors in the struggle for a military contract, the Zilovites treated the issue as real monopolists. And the military simply had no choice but to accept “pseudoZIS”. Accept and forget – like a story that would be better not to happen.