It looks like the story that began in 2008 is starting to end. The so-called coastal zone ships of the US Navy are being mothballed.

We wrote about the fact that there is an LCS class ship, and now we are beginning, apparently, to observe the last act of the performance.

According to Defense News, 06/20/2020, at a meeting at the top of the US Navy, a landmark decision was made to put four LCS-class ships on long-term conservation.

The release states that the ships USS “Freedom”, USS “Independence”, USS “Fort Worth” and USS “Coronado” should be put into reserve and mothballed by March 2021.

In general, the plans of the US Navy were to transfer these ships to the subdivision for the development of tactics for surface combat assets, the so-called First Squadron of Surface Development.

In addition to four LCS, this squadron was supposed to include four Zamvolt-class destroyers (one of which is still under construction) and an unmanned surface ship Sea Hunter.

In fact, this is just an epoch-making recognition that the ships, on which more than one billion dollars were spent, turned out to be worthless. Even for the role of test and training ships. 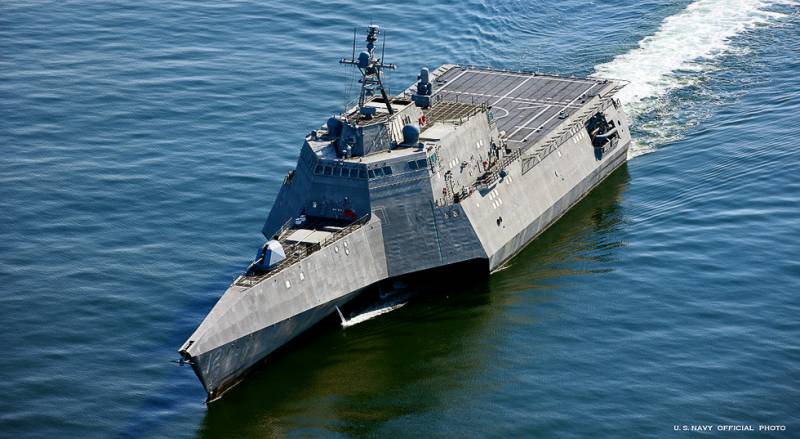 Meanwhile, the ships cannot be called old. The first was ready in 2008, the last of the four in 2014. Pretty fresh ships, isn’t it? Nevertheless, for some reason they were used as experimental and experimental ships.

But here’s what Rear Admiral of the United States Navy Randy Crites, Deputy Assistant Secretary of the Navy for Budgeting, told the press in an official statement. And he said just at the reporting press briefing on the fleet’s expenses for 2021.

“These four experimental ships were instrumental in getting the most out of them to explore crew service capabilities, maintenance and many other things we needed to learn from their operation. But they (LCS ships. – Author’s note) are not configured in the same way as other littoral ships in the fleet, and need significant modernization. Everything from combat to structural systems, as you call them. These ships are too expensive to upgrade. “

All in all unprecedented recognition. It turns out that the four ships of the first two series are no longer suitable even for the role of training.

Meanwhile, the US Navy has never made any statements about how much it could cost to upgrade LCS ships. Specifically, these four. It is clear that the subsequent ships in the series differ significantly from the first models. And the first ships were supposed to catch up with the next generations, but the command of the fleet did not imagine that the volume of alterations would be so significant.

Meanwhile, the fleet continues to receive previously ordered LCS class ships. This year the USS “Oakland” of the “Independence” class was delivered to the fleet. And it is not entirely clear how the newest ship is suitable for use.

The navy is strikingly trying to solve the problem of the normal functioning of the modules. Today there are three operational modules for LCS ships. The first is mine, when the ship can function as a minelayer and minesweeper, the second is anti-submarine and the third is a patrol with anti-submarine options.

Initially, the plan for the LCS ships was just fine. Quickly installed modules made it possible to configure the ship for immediate tasks. Today mines need to be cleaned out – no question. Tomorrow, according to the plan, patrolling – they removed some modules, put others – and in the sea.

This was the essence of the whole LCS program. 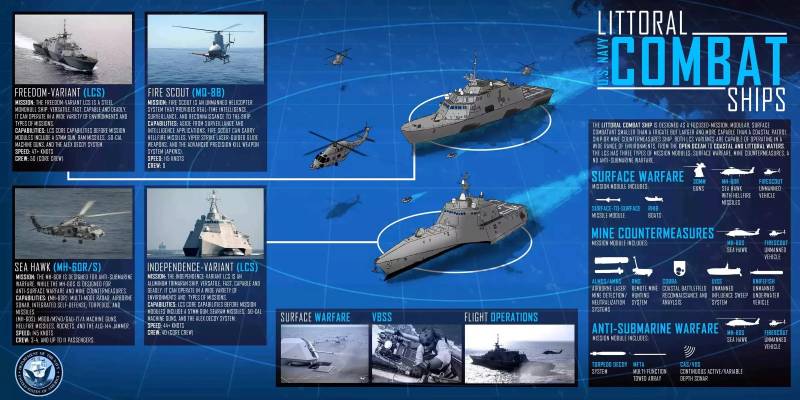 But during the tests, it suddenly became clear that it is not such a simple matter to rearrange the modules back and forth. As a result, it was decided to return to the averaged configuration scheme or to install modules on different ships of the same group for different tasks.

Alas, this deprived the flexibility of the entire ship specialization system. Moreover, the presence of ships of different configurations in one formation on an ongoing basis significantly weakened the capabilities of the group of ships.

The very idea of ​​flexible management under changing conditions of the day turned out to be unviable.

The capabilities of ships with modules installed for specific tasks turned out to be somewhat worse than everyone expected. Especially in terms of firepower. Therefore, work is currently underway to increase the combat capabilities of ships, for example, adding launchers for the RGM-148A (NSM) missile. The American naval command believes that by doing so it will at least slightly increase the combat power of the ships.

In general, having worked on all possible applications on the LCS, the US Navy came to a shocking conclusion: it is easier and more profitable to build all the same frigates to protect coastal sea territories. The frigate is a ship with a wider range of applications than the LCS, its second advantage is its readiness every minute to perform assigned tasks within the ship’s capabilities. 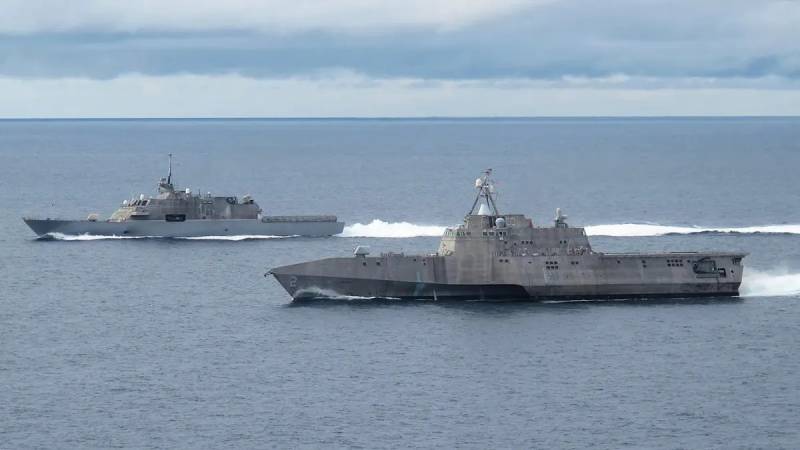 And, back in 2017, when they just began to draw conclusions about the insolvency of LCS-class ships, the American naval command turned to the American company Marinette Marine, a subsidiary of the Italian shipbuilder Fincantieri, in order to develop and build a ship, starting from the Franco-Italian project. “Fregata Europea Multi-Missione” (FREMM), or the so-called European multi-purpose frigate. 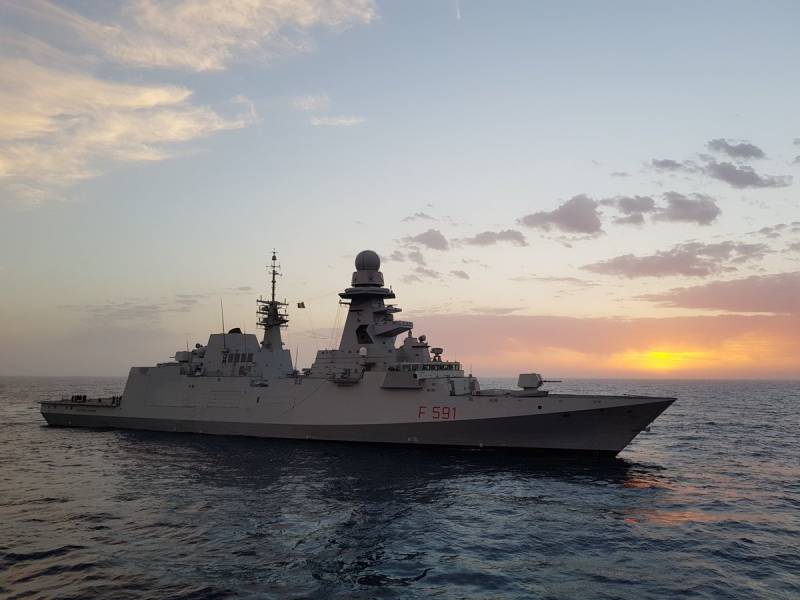 It is clear that after the extensive construction costs of 18 LCS-class ships, Congress did not estimate the budgetary costs of building 10 new FFG (X) S-class ships.

Moreover, the congressmen generally want to block the honorary retirement of USS Fort Worth and USS Coronado. Until the circumstances are clarified. The military budget, even in the United States, is not unlimited. Moreover, ten frigates are ten frigates.

As for the entire LCS project, then from the leadership of the Navy in Congress they require certificates that all operational tests on all modules of the project have been successfully completed. In addition to the mine, the tests of which are still underway and will end only in 2022.

But this little delay does not add optimism to anyone.

But in general, everything in terms of the LCS program is very difficult. Not that “the neighbor’s dacha burned down, a trifle, but nice”, but the realities are as follows: the littoral ships cannot even retire.

First, the navy will have to complete all the tests, then draw up all the required documents, the so-called NDA, agree on them before they are sent to Congress for a vote. After that, the documents can get on the table to Trump, who will decide the fate of the ships. As the first four, and all the rest.

No matter how many of the first four LCS ships eventually retire, their future is still uncertain. The navy gave them the status of “out of order, in reserve.” It is clear that the possibility of using LCS ships in the future remains, but it does not look very confident. 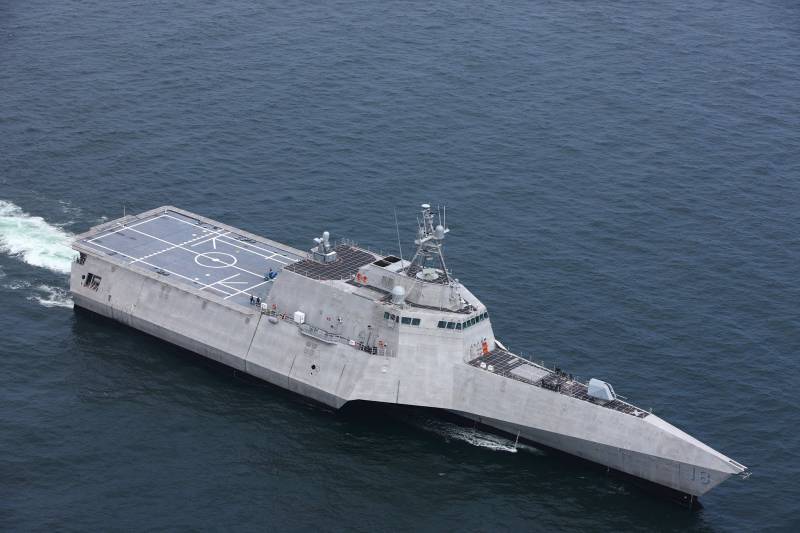 It is already clear today that the US Navy with great pleasure would send these ships not only to the reserve, but to hell. On pins and needles.

Only there is doubt that Congress and Trump will so easily satisfy the desire of American sailors.