The Orion complex with three UAVs and a command post. Photo by JSC “Kronshtadt” / kronshtadt.ru

The military-technical forum “Army-2020” is attended by the company “Kronstadt”, which is engaged in the development of unmanned aerial systems. This time the company presented in its exposition four UAVs of medium and heavy class at once. Of greatest interest from the point of view of prospects and opportunities are the products “Sirius” and “Helios” – heavy drones with a long flight duration.

The path to the premiere

The development of new heavy UAVs was announced last year. In addition, at the MAKS-2019 exhibition, they showed a full-size mock-up of one of these devices. As follows from the latest reports, it was the UAV “Helios”. Since then, projects have moved forward, which has led to the emergence of new curious products.

On August 17, Minister of Industry and Trade Denis Manturov visited the Kronstadt pilot production facility, deployed at the sites of the Moscow Machine-Building Enterprise. Chernysheva. Delegations of the ministry showed the already known full-scale Orion and model Helios, as well as two new models – Sirius and Thunder.

A few days later, all these items were delivered to the Patriot Park for placement at the exhibition site and demonstration to the Army-2020 visitors. Almost immediately, UAVs from “Kronstadt” attracted the attention of specialists and the public.

Development of the existing

The developer calls the Sirius UAV the next step in the development of the existing Orion vehicle. The development consists in an increase in size and weight, some design changes, as well as in the installation of new electronic equipment. The drone will be able to carry more cargo and work at an increased distance from the operator. 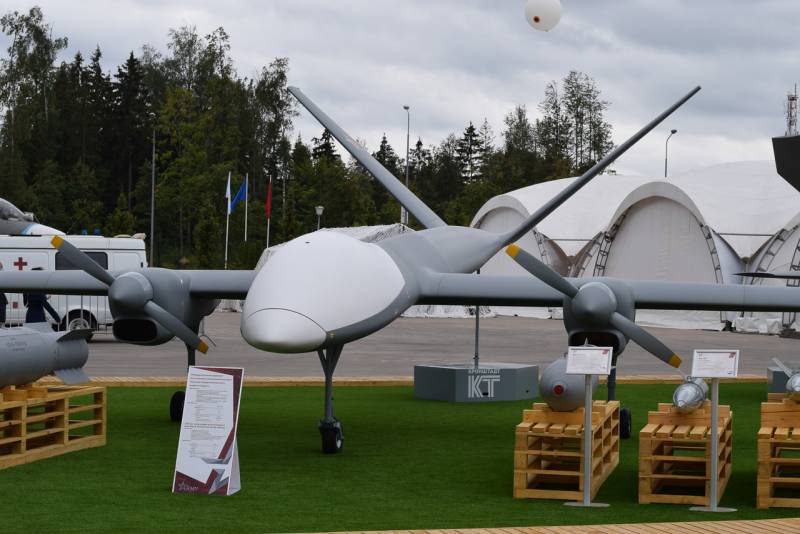 “Sirius” is an aircraft of normal aerodynamic design with a thin fuselage, a straight wing of a large span, and a V-shaped tail. The power plant includes two turboprop engines of an unnamed type in nacelles under the wing. The motors are equipped with two-blade propellers.

During the processing of the original airframe, the wingspan increased to 23 m, the length – up to 9 m. The maximum take-off weight increased to 2.5 tons, of which 1 ton is fuel. Payload – 450 kg. The mass of the dropped load on the external sling is 300 kg.

Currently, a promising satellite communication system is being developed to control a new generation of UAVs. Its appearance will dramatically improve the tactical and technical characteristics of drones. Thus, the operating range of the Sirius will actually be limited only by the fuel supply on board. Operator consoles are located on a universal mobile control center, compatible with other modern UAVs developed by the Kronshtadt company.

Like its predecessor, the new “Sirius” is intended for patrolling and conducting reconnaissance and terrain mapping in different ranges. In a combat configuration, it can strike at ground targets, incl. with detection immediately before the attack, as well as monitor the results of the defeat. It is possible to use UAVs for target designation to various fire weapons. 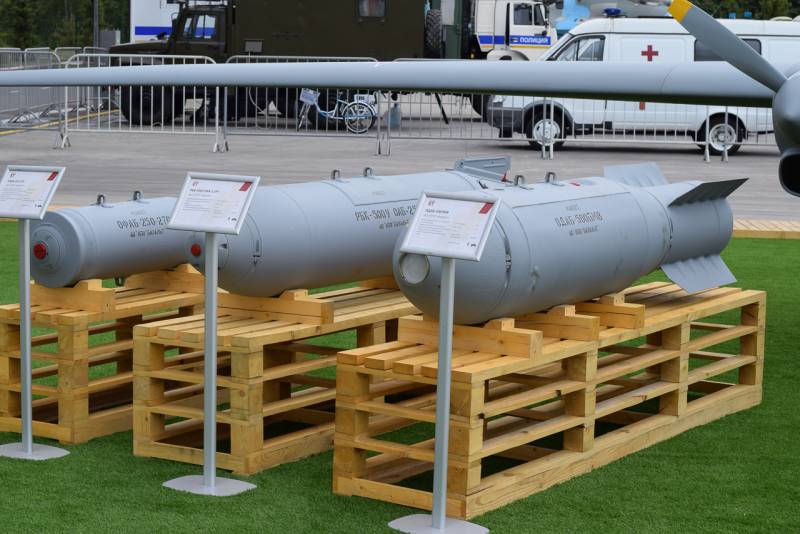 The second development was presented in the form of an unmanned radar patrol vehicle – “Helios-RLD”. This aircraft is larger than Orion and Sirius, has a different layout, and also differs in flight performance.

“Helios-RLD” receives a fuselage of shorter length, in the tail section of which there is a turboprop power plant with a pusher propeller. A large span straight wing is used, from which two tail booms extend. The plumage is L-shaped. The wingspan reaches 30 m with a length of 12.6 m.

The takeoff weight of the “Helios-RLD” product reaches 4 tons. The payload is 800 kg. The UAV shows a cruising speed of 350-450 km / h and is capable of climbing to an altitude of 11 thousand meters. The maximum flight duration is 30 hours, the range is 3 thousand km.

In addition to the standard navigation and control aids, Helios-RLD received a side-looking radar. Its antenna is suspended under the fuselage in a flat long fairing. The type, characteristics and capabilities of the radar are not specified. Also, the issues of ensuring communication and data transfer to the universal control center are not disclosed. 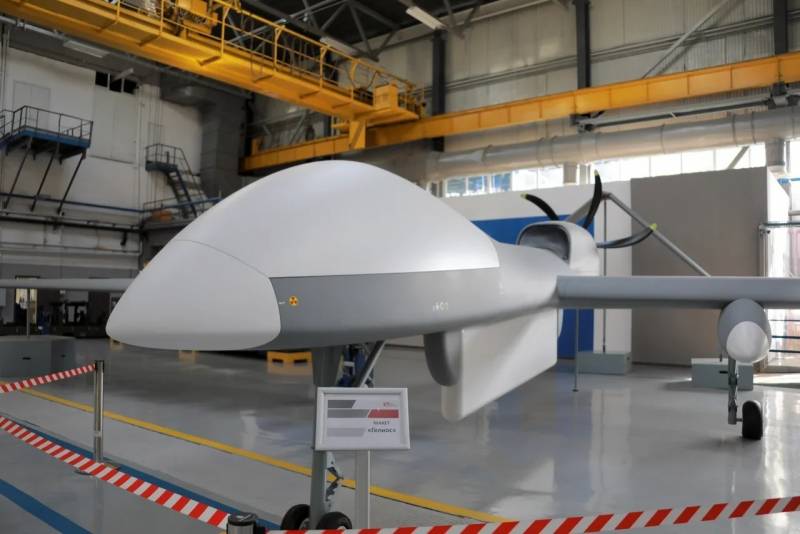 Model of the product “Helios-RLD” in the assembly shop. Photo by the Ministry of Industry and Trade of the Russian Federation

“Helios-RLD” is designed for long-term patrolling in a given area. The onboard radar provides search and tracking of air, ground and surface targets. The UAV can perform single and group duty, covering a wider front. In addition, the product “Helios” can be used for reconnaissance and strike purposes.

The Russian aviation industry has long been engaged in the topic of heavy unmanned aerial vehicles for reconnaissance and strike purposes. Several organizations are involved in the work, and their projects are at different stages of implementation. The Kronstadt company is one of the leaders in this direction – it has already brought the Orion UAV to operation in the army and is now developing new projects.

New projects offer equipment with improved tactical and technical characteristics, capable of solving a wide range of tasks. At the same time, due to the difference in key parameters, “Sirius” and “Helios” are able to occupy two different niches and complement each other, as well as to be successfully used in parallel with other unmanned systems.

It should be recalled that there are no heavy reconnaissance and / or strike UAVs, such as Helios and Sirius, in service with the Russian Aerospace Forces. Therefore, any such sample is of great interest and can be useful for the army. In such a situation, a big plus is the presence of several projects of equipment of similar classes, but with different characteristics at once. The command gets the opportunity to choose the best model, which more fully meets the requirements, or to adopt all the developed ones. 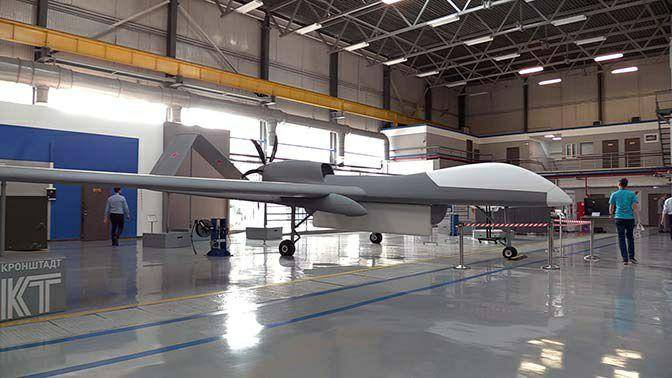 View from a different angle. Photo by the Ministry of Industry and Trade of the Russian Federation

However, so far there is no talk of adopting it. Judging by the demonstration of mock-ups, promising UAV projects are in their early stages. There are no full-fledged flight prototypes, and the timing of their appearance is not specified. All this means that it will take several years to complete the design and subsequent work, and only after that the Sirius and Helios will be ready to enter the series and the troops.

High complexity can negatively affect the timing and cost of work. However, the Kronstadt company already has significant experience that will help it successfully complete all new projects. The middle Orion has already been brought to service in the military, and new models should follow.

In general, an interesting and promising situation is gradually emerging in the field of medium and heavy reconnaissance and strike UAVs. The army has already received the first “Orion” complexes of the middle class with broad general capabilities, but with limited combat potential. The heavy “Altius-U” and the inconspicuous “Hunter” are being tested. Recently, several new drones are being developed at once.

Thus, in the medium term, several heavy unmanned aerial vehicles with various differences may appear in the armament of the Aerospace Forces. With their help, it will be possible to close several still empty niches. Which of the current developments will reach the troops, when this will happen and how it will affect the combat effectiveness of the Aerospace Forces – time will tell.