Infantry fighting vehicle BMP-1. The main part of the body is made of steel; the characteristic hatch on the upper frontal part is made of aluminum alloy. Photo Wikimedia Commons

In the second half of the last century, armored combat vehicles became widespread, the protection of which is provided by rolled parts of one kind or another made of aluminum alloys. Despite the apparent softness and other features, aluminum was able to show all its advantages over steel armor and even push it out in a number of areas.

Aluminum as a material for advanced booking began to be considered only in the middle of the 20th century. For example, in our country, work in this direction started in the late forties. Soviet specialists first looked for the possibility of creating light armor for aircraft; then the same project began in the interests of the fleet. And only by the end of the fifties they began to “try on” the aluminum armor for ground armored vehicles. At that time, similar processes were observed in foreign countries.

By the beginning of the sixties, Soviet and foreign metallurgists found optimal alloys of aluminum and other metals, capable of showing the desired strength indicators. By the mid-sixties, such alloys were used in real projects of light armored vehicles of a number of types. In some cases, aluminum was used alone, in others, along with other metals. 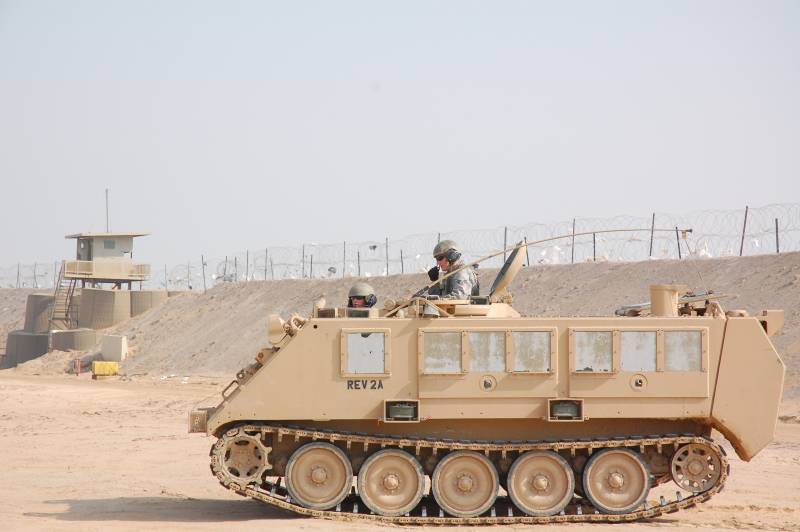 American armored personnel carrier M113 with an aluminum body. Due to new threats, their own armor has been supplemented with overhead blocks. US Army Photos

Subsequently, new alloys appeared in our country and abroad – and new armored vehicles with similar protection. The finished vehicles have repeatedly participated in battles and demonstrated their capabilities. In tests and in practice, aluminum armor has shown high performance and even advantages over other protection. All this allows her to remain in the ranks to this day.

The first domestic armored vehicle with aluminum armor was the BMP-1. She received a steel case, but the upper frontal part-cover of the transmission compartment is made of aluminum alloy. In the same period, BMD-1 was created, which received a full body made of ABT-101 / “1901” alloy. The same approaches were used in the following assault vehicles. The later BMP-3 has aluminum spaced armor with steel screens, which allows the frontal projection to withstand a 30-mm projectile.

Of the foreign samples, first of all, it is worth noting the American-made M113 armored personnel carrier. Body parts up to 44 mm thick are made of 5083 and 5086 alloys. The frontal projection is protected from 12.7 mm bullets, other surfaces – from normal caliber. Modern M2 Bradley infantry fighting vehicles are also built from 7039 and 5083 aluminum alloys. The forehead and sides are reinforced with steel screens. 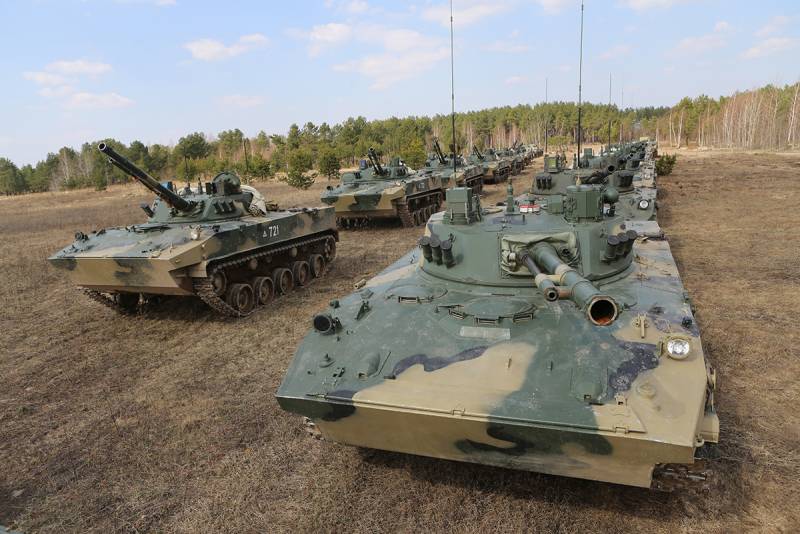 BMD-4M airborne combat vehicles – like their predecessors, are built from aluminum alloys. Photo of the Ministry of Defense of the Russian Federation

Other countries have mastered the technologies of manufacturing aluminum armor for a long time. Such protection is actively used on armored combat vehicles developed by Great Britain, Germany, France, etc. Some alloys and assembly technologies are developed independently, others are purchased from friendly countries.

Aluminum itself cannot serve as sufficient protection for an AFV due to its softness and insufficient strength, but its alloys are capable of showing the required characteristics. The first appeared and became widespread are non-heat-strengthened alloys of aluminum with magnesium – AMg-6, 5083, etc. Compared to other alloys, they show a higher anti-splinter performance.

There is a group of alloys with an addition of up to 6-8 percent. magnesium and zinc are Soviet ABT-101 and ABT-102, as well as foreign 7017, 7039, etc. They are characterized by increased hardness, which gives advantages in protection against bullets or projectiles, but reduces anti-splinter potential. 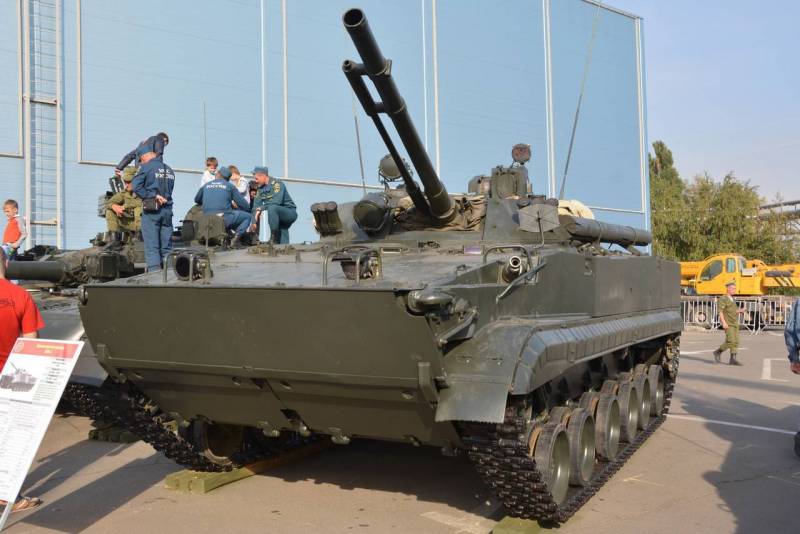 Aluminum armor can be subjected to additional processing to increase its durability. First of all, it is hardening and work hardening. From a technological point of view, thermal hardening is simpler and more convenient – moreover, it removes a number of restrictions on the production of parts.

Armor protection of one AFV can include elements from different alloys with different thicknesses, installation angles and protection levels. So, to protect against bullets of normal caliber, up to 25-30 mm of armor is required. Large caliber threats require a response with a thickness of at least 50-60 mm. However, despite its considerable thickness, such armor does not differ in excessive weight. The use of spaced barriers is possible.

For a long time, light alloys began to be combined with other materials. Steel or ceramic elements are inserted into aluminum parts. Also in recent years, overhead elements of additional protection have become widespread, significantly improving the own performance of the armored combat vehicle body. The general survivability of equipment can also be increased by means of dynamic or active protection. 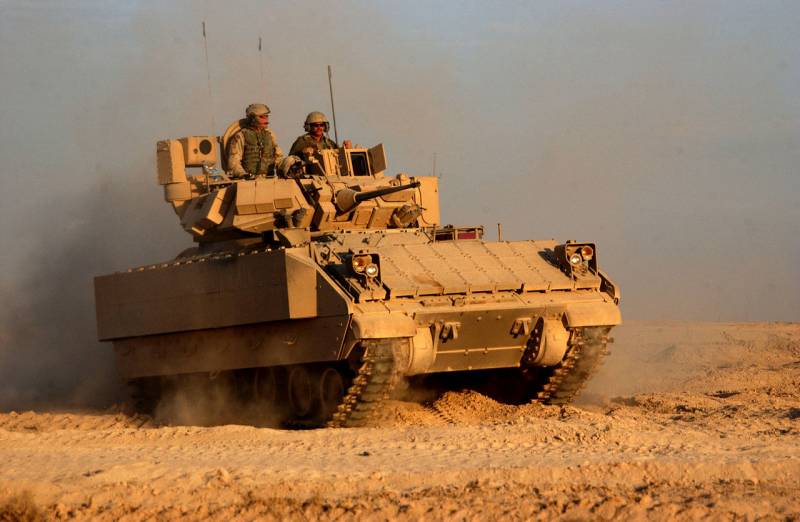 The main advantage of aluminum alloys is their lower density. Due to this, an aluminum structure with the same parameters of parts is significantly lighter than a steel one. This weight saving can be used to reduce the weight of the AFV, to build up armor with an increase in the level of protection, or to solve other design problems.

Aluminum and alloys compare favorably with steel armor in greater rigidity. This allows you to remove the power elements from the structure of the armored hull and thereby reduce its weight. In some cases, a weight saving of at least 25-30 percent is achieved.

Aluminum armor shows itself well at low angles of impact, as well as at angles over 45 °. In such conditions, aluminum alloys confidently extinguish the energy of a bullet or fragment, not allowing them to pass through the armor or knock out the fragments from the rear side. At high angles, ricocheting is also ensured without serious damage to the armor. However, in the range from 30 to 45 degrees. the best results are shown by steel. 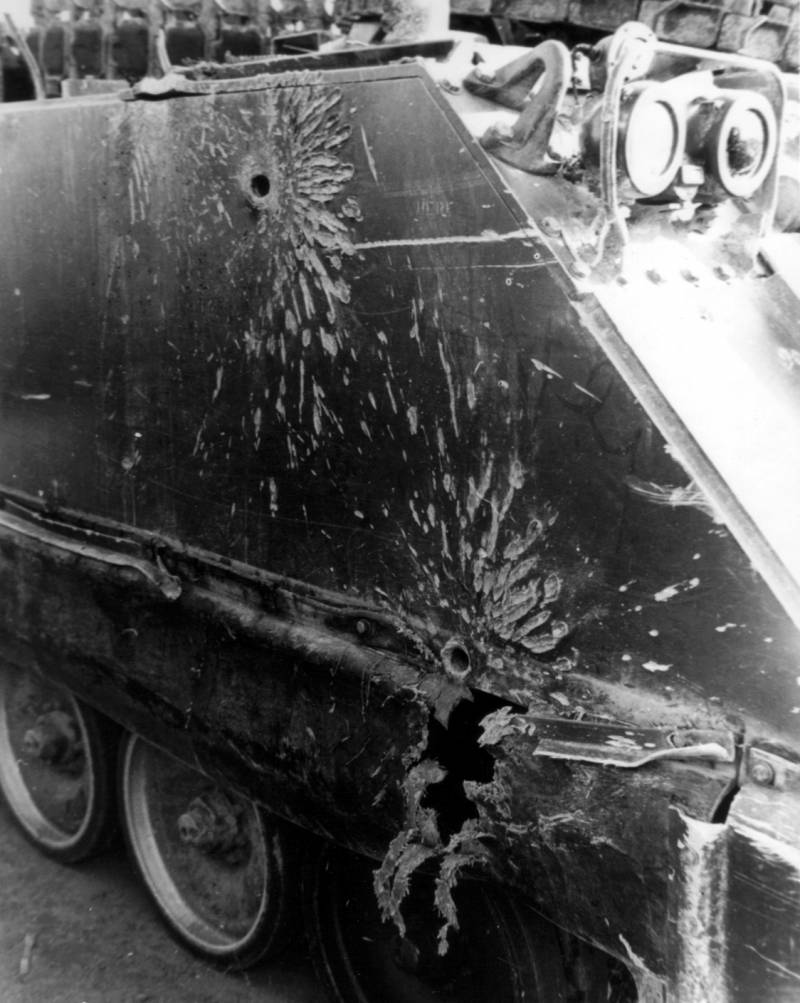 The defeat of the M113 armored personnel carrier in the side with 57-mm HEAT shells. The result is two penetrations through with damage to the internal compartments. US Army Photos

In the first decades of their development, aluminum alloys were inferior to steel in terms of production costs, which negatively affected the price of finished AFVs. Further progress and new technologies have narrowed this gap. In addition, new booking options have appeared – not worse than aluminum alloys, but not cheaper than them either. So, titanium armor, at least, is not heavier, and the combined protection based on ceramics makes it possible to create a more resistant barrier in the same dimensions. However, both options are much more expensive than aluminum alloys.

With all the positive differences from steel armor, aluminum has several disadvantages. The main one is the need to increase the thickness for the same level of protection. As a result, the implementation of powerful projectile armor made of aluminum alloy is not possible – both homogeneous and combined. It is for this reason that tanks and other armored combat vehicles with a high level of protection still rely on steel.

Heat-strengthened aluminum alloys are more sensitive to high temperatures than armor steel. So, a steel armored hull during a fire can lose strength and protection characteristics, but basically retains its structural integrity – if it is not destroyed by other factors. When an AFV burns, aluminum armor first loses its resistance to ballistic threats, and then softens and even melts. Burning long enough, the car literally folds or disintegrates. All this poses a great danger to the crew and troops, and also excludes recovery. 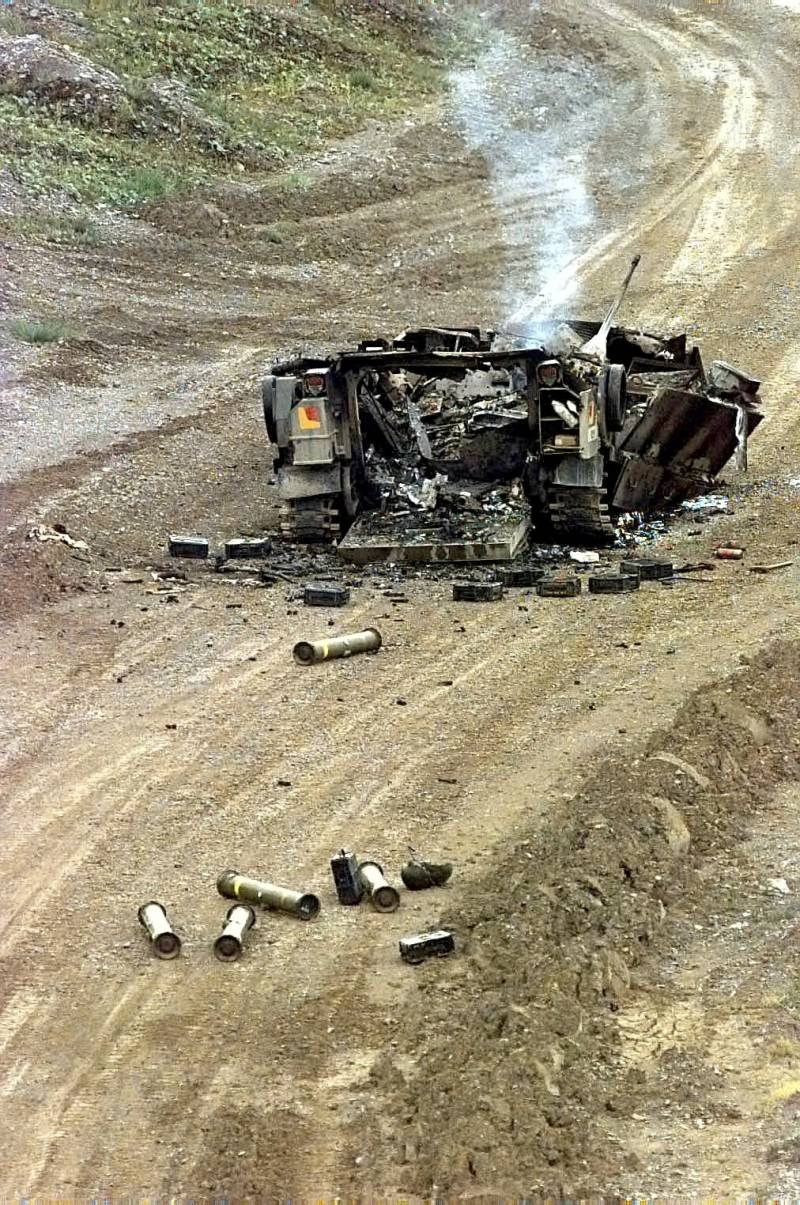 At one time, problems arose when introducing aluminum armor into the production of equipment. Enterprises that previously worked only with steel were forced to master the new material and related technologies. However, by now all such problems have been resolved, and aluminum armor is as familiar to factories as steel. The “honorary title” of a complex novelty eventually passed on to other developments.

As you can see, aluminum alloys have certain advantages and are of great interest to developers of armored combat vehicles. Since the middle of the last century, such interest has resulted in the appearance of several dozen types of armored vehicles with one or another use of armor made of aluminum alloys. Some remained at the level of design and testing, while others were built in tens of thousands and successfully solved combat and other tasks.

Aluminum alloys have proven their potential in the reservation context and are therefore widely used. They could not completely replace the usual steel castings or sheets, but in a number of areas they became a good replacement for them. At the same time, the development of equipment protection equipment did not stop, and to date, customers and developers of armored vehicles have at their disposal a long list of various materials – aluminum alloys are far from the last place in it.