And they were there in the 1920s? Quite a reasonable question, because of those who are interested in the history of armored vehicles, they probably read that the Americans had neither tanks, nor … experience in their design before the Second World War. They remember the W. Christie’s tank (how could it be without it ?!), and so – well, just a very backward tank design was there, overseas. However, was it really so? At one time I was very lucky: my friend, the artist I. Zeynalov, gave me two volumes of battered Heigl reference books published in the 1930s as a present. And while reading them, I was surprised to find that it was in the United States at that time that numerous models of a wide variety of light and medium tanks were created, although they were not accepted into service. That is, American engineers began to work on them literally a few years after the end of the First World War. 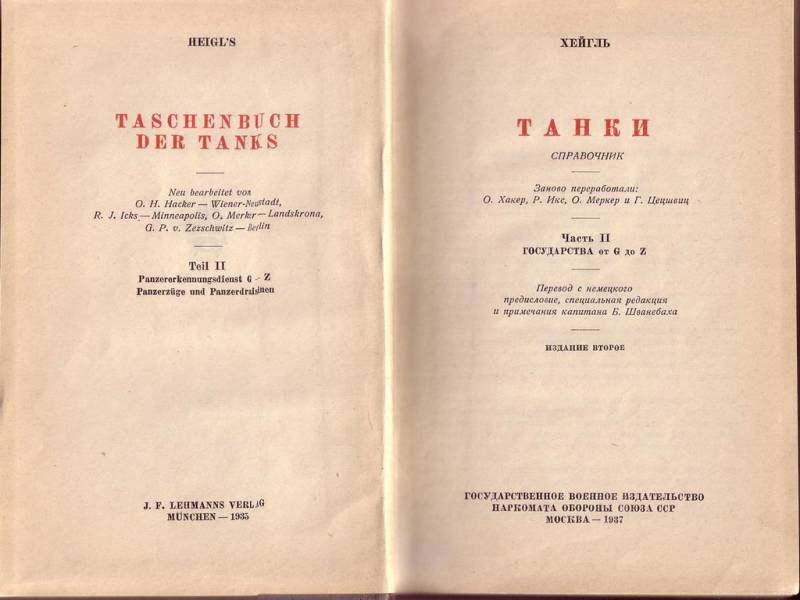 The Heigl handbook is the most informative handbook of the 1930s, dedicated to armored vehicles …

The private firm “James Cunningham, Son and Company” was also engaged in the development of new promising models of tanks. The founder of the company, an immigrant from Ireland, found himself in America and chose the career of a production worker. In 1834 he organized an office for the production of horse-drawn carriages. And crews for every taste: from mail carriages to hearses, inclusive. In 1908, the company even began to produce cars, although it made them mainly for its regular customers, assembled from ready-made parts taken from different companies. 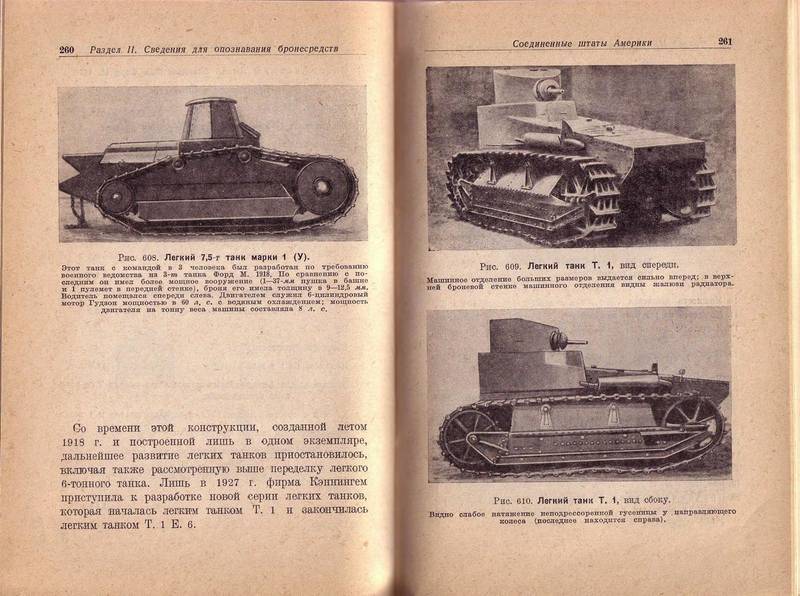 Meanwhile, already in 1922, the American military prepared a technical assignment for a new light tank and announced a competition for its promising model, in which any company could take part. The tank was supposed to be armed with a 37-mm cannon and a 7.62-mm machine gun, have bulletproof armor, a speed of about 20 km / h and a crew of two. And it was the Cunningham company that won this competition and on March 15, 1927 received an order for an experimental T1 tank (that is, “Test” – experienced). The engine was installed on the front of the tank, and the fighting compartment was installed in the back. The chassis was taken from a tractor, so it had a large number of small-diameter road wheels (8 per side) with almost no suspension. The tank driver sat on the axis of the hull, and the gunner commander was in the turret. There were two hatches: one on the tower above, and the other in the rear armor plate of the hull in the form of a double door. So it was very easy to leave the tank if something happened. The idea was interesting and promising: to create a cheap tank that can be produced by ordinary tractor factories! 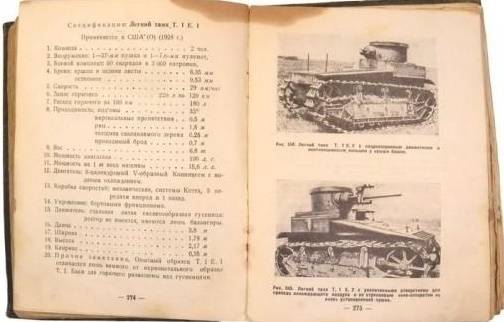 As you can see, there is a very detailed description of the car on the left. More details simply do not exist!

On September 1, the tank was ready, although instead of a turret, it had a wooden model on it. Sea trials were not very successful, but on the whole the tank showed itself better than Renault. Perhaps the reason was the good 110 hp V-8 engine. with. and a well-developed and reliable gearbox. True, the armor was only 10 mm thick and, moreover, it stood vertically. The hull was partly welded, partly riveted. 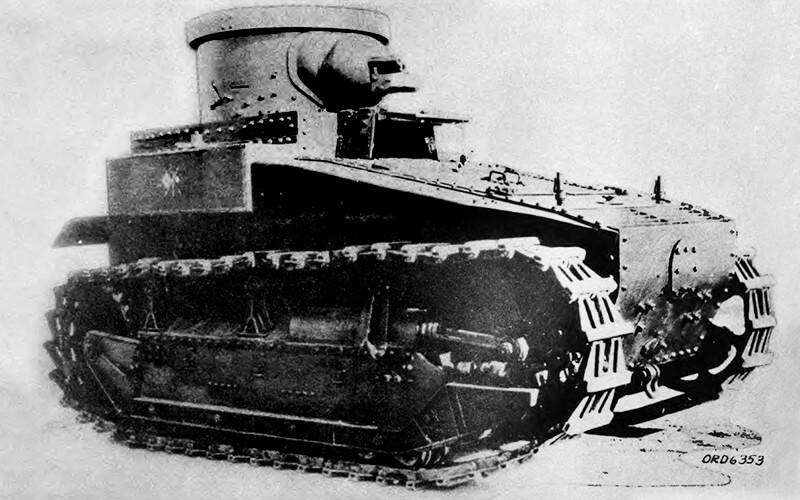 Most of all, the T1 tank looked like … a tractor

On the basis of this chassis, the military ordered six vehicles from the company at once: four improved T1E1 tanks and two light conveyors without towers – also T1E1. The shape of the hull was changed for the new model, and the fuel tanks were placed on the sides of the wheelhouse on the fenders. Now it had a turret with armament: a 37-mm gun and a 7.62-mm Browning machine gun. And then something happened that every arms manufacturer dreams of in the United States: on January 24, 1928, the tank was accepted into service under the designation M1 light tank (“model”). The tank’s weight was 7 tons (with a power-to-weight ratio of 16 hp per ton of weight), so the maximum speed was almost 30 km / h with a power reserve of 120 km. 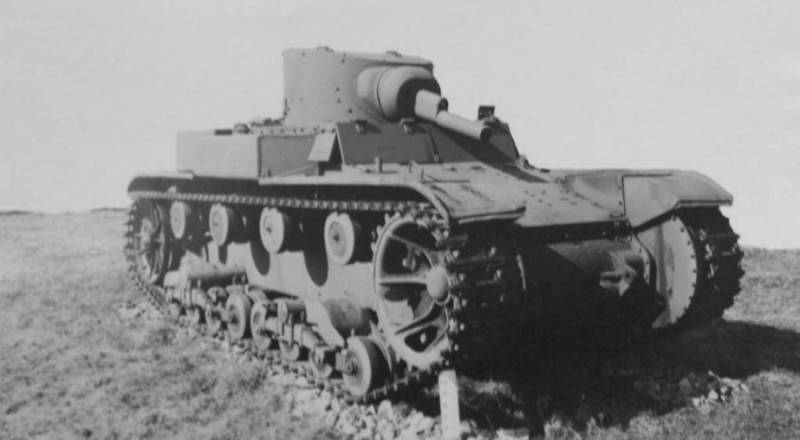 Four assembled T1E1 tanks on June 20 of the same year were sent to Fort Meade, Maryland, to the first Experimental Mechanized Brigade for testing. For 57 days, one of the tanks covered more than three thousand kilometers, and did not have any serious breakdowns, but the old Renault tanks could cover 130 km no more from repair to repair …

But the thickness of the armor of T1E1 (10 mm), in comparison with Renault, seemed to them insufficient. Still, that one had 15 mm. Therefore, on December 8, 1928, the company was asked to make a new tank under the symbol T1E2. It was completed on June 3, 1929. The engine was boosted in it, and now it developed 132 hp. with. The thickness of the armor was increased to 16 mm at the front. The outdated 37-mm M1916 cannon was replaced with a new, long-barreled one, with an initial velocity of an armor-piercing projectile of 600 m / s. Naturally, the tank’s weight increased to 8 tons, so the suspension had to be upgraded as well.

True, the cross-country ability of this tank has not significantly improved. In this regard, the chassis was significantly altered on the second T1E1 machine, spring springs and hydraulic shock absorbers were installed. The engine and gun were taken from the new T1E2, and the voltage in the power supply system from 6 volts was changed to 12. The tank received the designation T1E3 and in April 1931 it also went to the next tests. They showed that the vehicle’s permeability increased, but numerous production problems prevented it from being put on stream. 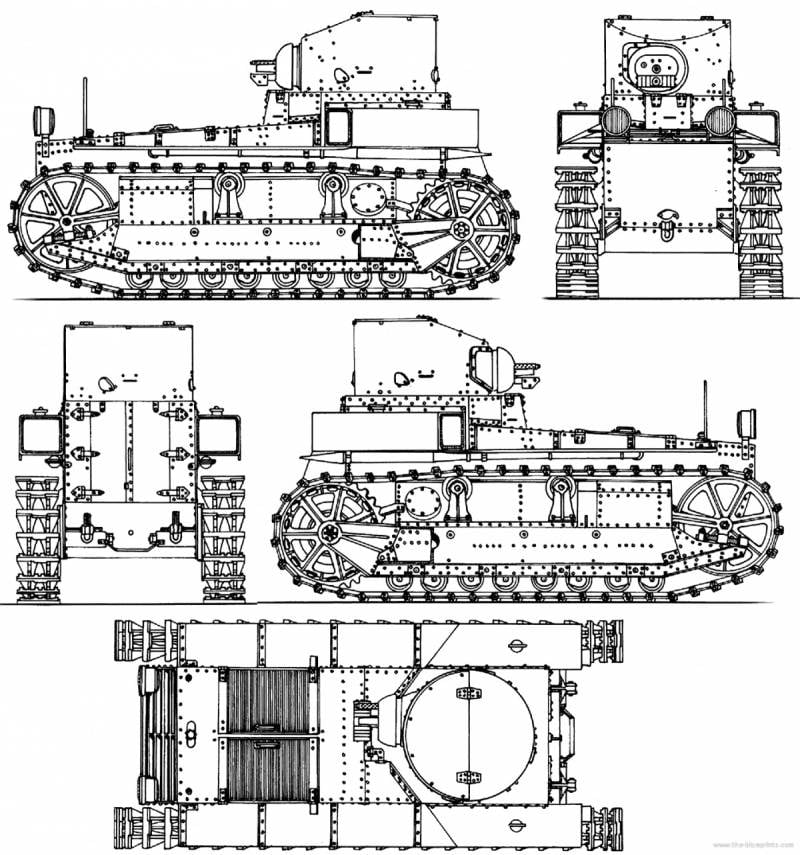 Projections of the T1 tank with a simplified turret without an annular fan. Of course, the double-leaf hatch on the rear armor plate looks very comfortable.

Numerous experiments have shown that the location of the engine on the front of the tank limits the driver’s visibility and increases the gas content in the fighting compartment. For these reasons, the company decided to radically alter its tank by turning the engine back.

In the United States, just at this time, a new British tank “Vickers” 6 tons was tested, the suspension of which formed the basis of the new American chassis. The engine remained the same V-8, increasing power to 140 hp. with. Armament and armor were not changed. Although the turret was installed from the T1E1 tank, and not modified from the T1E2. The new tank was designated as T1E4. The weight of the vehicle was 8.5 tons. The highest speed was 37 km / h, the armament was a 37-mm semi-automatic cannon and a 7.6 mm machine gun paired with it, the armor thickness was 7-16 mm, the crew was 4 people. All tanks were equipped with a radio station, which was a novelty in tank building. Another tank with a new transmission received the designation T1E5, although outwardly it did not differ from the previous model. 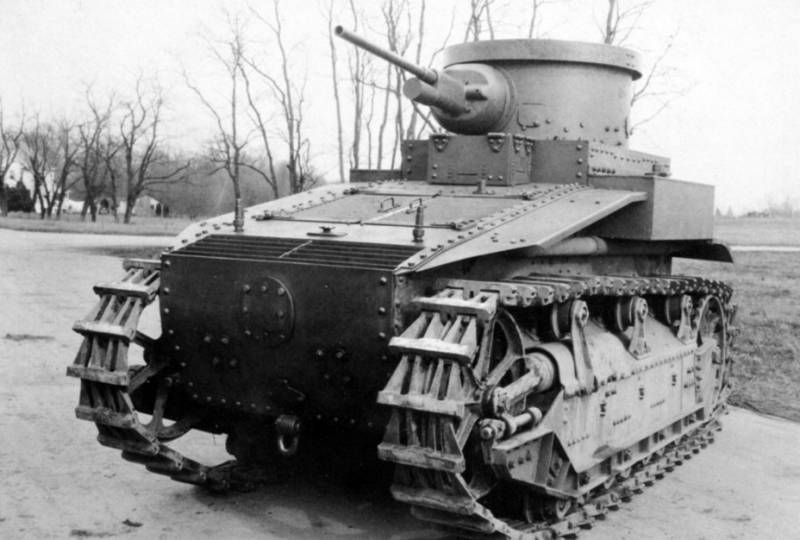 Meanwhile, the T1E6 tank appeared on the arena. This car was equipped with a 12-cylinder engine with a capacity of 245 hp. with. Thanks to this, despite the increased weight, the maximum speed remained at 32 km / h. But … no matter how hard the designers tried, they decided to stop working on further improving tanks of this type. The army did not really like them, although … no one denies certain merits for them.

However, the company immediately switched to a medium tank, based on the design of a previously created light one! The order to start work was given on March 11, 1926, after which a long research in the field of layout solutions began again. At the same time, the mass of the vehicle on the assignment could not exceed 15 tons. Only three years later, namely in 1929, the design of the tank was approved by specialists from the Rock Island Arsenal. As already noted, the Cunningham T1E1 was taken as a sample. In addition, the British Vickers Medium, which had just appeared, had a certain influence on the concept of the new tank. 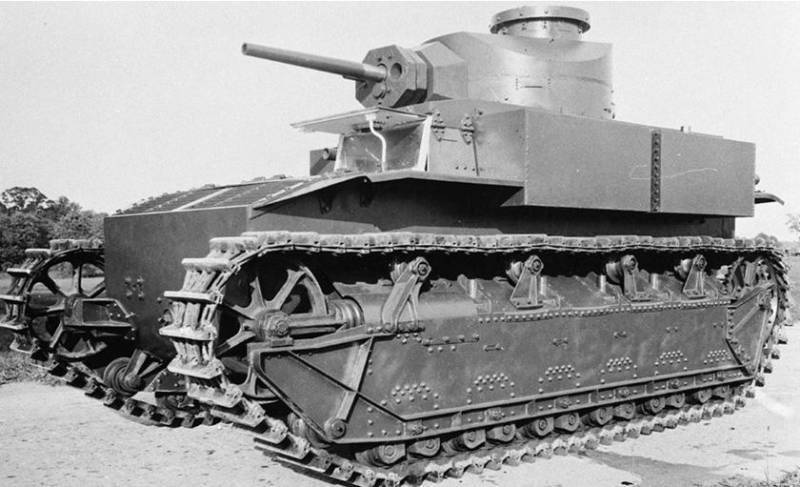 The T2 medium tank had a turret with side slopes and a commander’s mushroom-shaped turret with ring ventilation.

By 1930, a new medium tank, indexed T2, entered state trials. The weight reached 14 tons, the power of the Liberty engine had a very good figure of 338 hp. with. At the same time, the speed of the car reached 40 km / h, although it was deliberately reduced to 32 km / h in order to increase the service life of its transmission and gearbox. 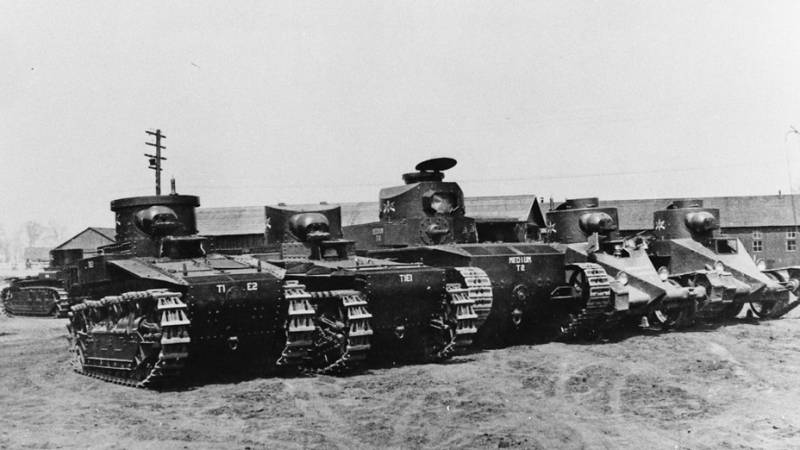 The turret of the T2 tank, which was located in the rear of the T1 tank after the example of the T1 tank, contained a 47 mm semi-automatic gun with an initial projectile velocity of 610 m / s and a Browning machine gun of 12.7 mm caliber. This impressive arsenal was complemented by a 37 mm cannon in the frontal armor plate of the hull, the shooter from which sat next to the driver. Putting two guns of different calibers on one tank is a decision, let’s say, not very reasonable, but what kind of firepower this tank had! True, during tests in October 1931, it was nevertheless replaced with a conventional rifle-caliber machine gun. The T2 armor thickness ranged from 22 to 6 mm, which was pretty good for a 1930 tank. The tank, by the way, was highly appreciated by the Soviet newspaper Krasnaya Zvezda in 1932, which noted that two cannons and two machine guns give this tank very powerful weapons, and the speed of 40 km / h was noted as high. True, there was only one such tank in the United States, so it posed no particular threat to anyone. All in all, the Cunningham company produced seven prototype tanks, but none of them went into mass production! But this does not mean that its engineers did not receive rich experience during their creation, moreover, a good technological base was created at the enterprise for the production of the most modern tanks at that time.