The project of an unusual fighter, necessary for escorting strategic bombers, originated in the United States in the second half of the 1950s. For its time, the novelty stood out with an excellent set of flight performance characteristics. If the plane were really built, it would be a breakthrough. However, the XF-108 Rapier fighter did not advance beyond the project. The heavy escort fighter never took off.

The XF-108 Rapier is introduced

The 1950s marked the final transition to jet-based combat aviation. It was at this time that the United States was close to presenting to the world unique supersonic jet aircraft with unprecedented flight performance characteristics. The experimental XF-108 Rapier fighter, which began to be created in the late 1950s, was just one of such projects. The new fighter could well change the idea of ​​aviation. Work on its creation was carried out in conjunction with the development of a new strategic supersonic bomber B-70 Valkyrie.

The famous American company North American worked on the creation of the aircraft, which earlier presented the world with one of the best fighters of the Second World War, the P-51 Mustang. Work on the strategic bomber and escort fighter was carried out as part of a project initiated in 1957 by the US Air Force command to create new strategic systems. The project provided for the creation of a supersonic strategic bomber capable of a speed of Mach three, as well as an escort fighter that would not lag behind the bomber in flight speed. The third direction of the project was the creation of intercontinental cruise missiles, which also had supersonic speed. 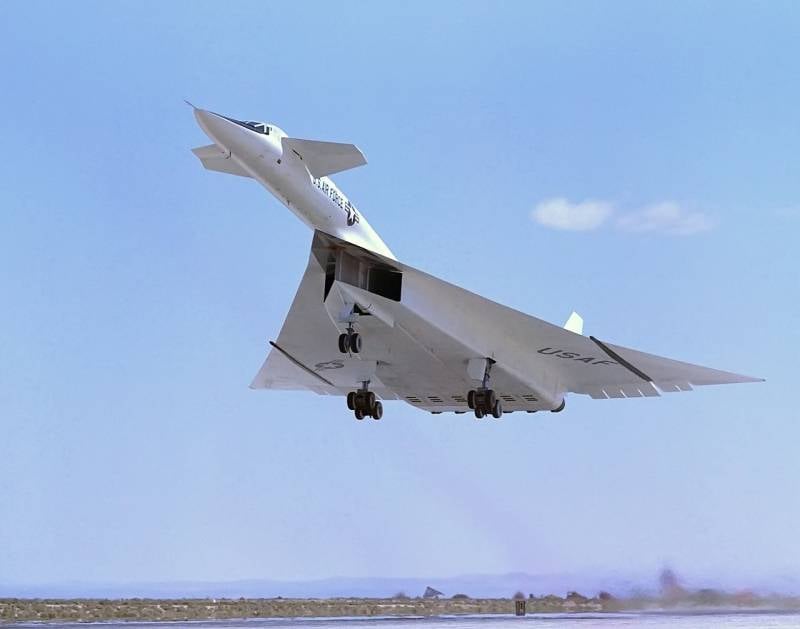 If the American military quickly abandoned cruise missiles in favor of more profitable and promising ICBMs, then work on the bomber and fighter was carried out quite actively. Although the XF-108 Rapier never took to the skies, its closest relative, the B-70 Valkyrie strategic bomber, was embodied in metal. The bomber was built in duplicate and first flew in 1964. This fact did not go unnoticed by the Soviet intelligence. The USSR’s response to American developments was the creation of the E-155 supersonic fighter-interceptor, which in the future turned into a serial MiG-25 fighter.

Supersonic escort fighter and its capabilities

The contract for the construction of two supersonic escort fighters was signed with North American on June 6, 1957. The two new aircraft were designated XF-108 (internally designated NA-257). The new fighter was originally designed as a machine capable of long-range flights and at a very high speed – about Mach three. The aircraft was planned to be used both as a long-range interceptor, which was supposed to intercept strategic Soviet bombers in the skies over the Arctic, and as a heavy escort fighter for the American strategic supersonic bombers B-70 “Valkyrie”. In this regard, the aircraft was supposed to fulfill the same role as the P-51 Mustang, which accompanied the “flying fortresses” during the Second World War.

Despite the fact that the XF-108 Rapier was never built in metal, the project was promising and stood out with a number of interesting innovations. According to the initial plans, the fighter, like the B-70 Valkyrie bomber being created in parallel, was to receive two General Electric J95-GE-5 turbojet engines (it was planned to install six such engines on the bomber), operating on borohydrogen fuel – pentaboran. In terms of its qualities, the pentaboran was superior to classic aviation kerosene. However, it quickly became clear that the use of the new fuel made it possible to increase the range of the aircraft by only 10 percent. At the same time, this fuel remained an extremely toxic and harmful substance. In August 1959, work on the creation of the J95-GE-5 engine was closed along with work on the creation of borohydrogen fuel. 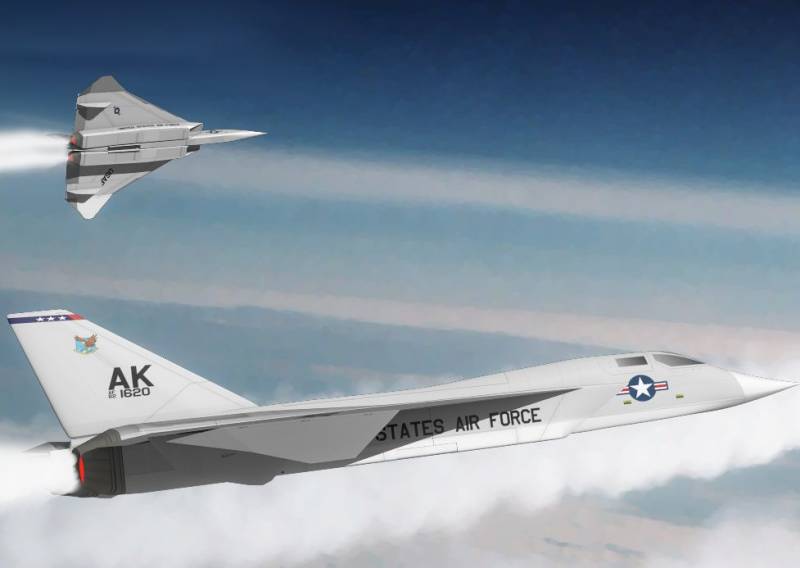 The second distinctive feature of the new fighter was to be a complex fire control system and a set of weapons used for its time. The aircraft’s control system was created on the basis of the latest pulse-Doppler radar ASG-18, which was supposed to provide target selection in the lower hemisphere. Powerful on-board radar equipment was to work in conjunction with the latest guided air-to-air missile GAR-9 “Super Falcon”. A distinctive feature of the rocket was an extremely high flight speed – about Mach 6 and a long range – 176 km.

The heavy fighter was supposed to carry three such missiles at once, weighing 365 kg each, while it was planned to place the missiles in the internal weapons compartment. To aim the new missile at the target, it was planned to use a combined homing head. At medium range, a semi-active radar targeting system was used, in the final phase of the flight – an infrared guidance system.

Externally, the XF-108 Rapier was a large aircraft equipped with two turbojet engines. After abandoning the power plant operating on borohydrogen fuel, the designers returned to the classic General Electric J93-GE-3AR engines with afterburner thrust at 130.3 kN each. It was believed that this would be enough to accelerate the aircraft with a maximum take-off weight of more than 46 tons, to a speed of 3186 km / h. 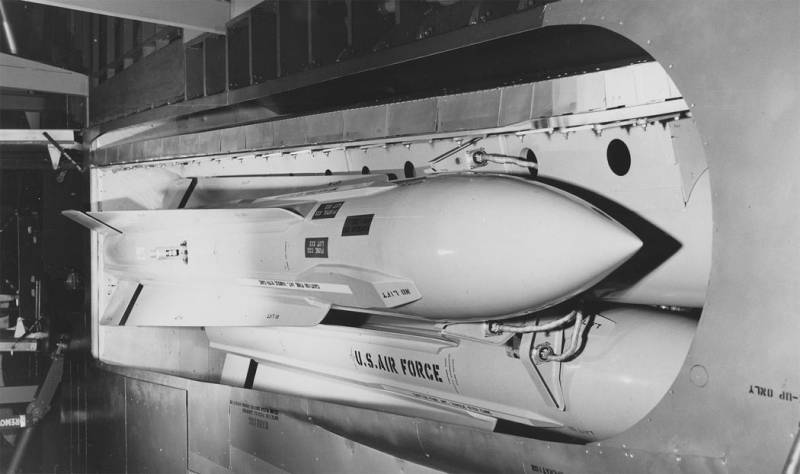 Structurally, the XF-108 was an all-metal canopy aircraft with a characteristic triangular wing. The wingspan was 17.5 meters, the wing area was 173.5 square meters. As conceived by the designers, the delta wing of the fighter was to receive mechanization along the entire trailing edge, as well as wing tips that deviate downward. The same decision was planned for the Valkyrie strategic bomber. As conceived by engineers at North American, this was to increase the directional stability of the new aircraft, especially when flying at supersonic speeds. The crew of the fighter was supposed to consist of two people.

The development of the ICBM prevented the implementation of the project

The US military planned to receive the first ready-made fighter by early 1963. At the same time, the Pentagon was ready to buy a new car in the hundreds. According to the initial plans, the US Air Force expected to order 480 F-108 fighters at once, which have already been given the official name Rapier (“Rapier”). However, this was not destined to come true. Already in September 1959, the project to create a new heavy escort fighter was finally frozen, and in 1960 the North American company finally stopped development.

The new fighter was never built in metal, remaining forever at the stage of a wooden model. The fate of the project was negatively affected by the constant increase in the cost of the aircraft, as well as the increasing uncertainty about the prospects for strategic weapons. It was not clear which strategic bombers of the USSR should be opposed by a new fighter with such a set of combat capabilities. At the same time, intercontinental ballistic missiles entered the scene, becoming the main striking force of countries possessing nuclear weapons. 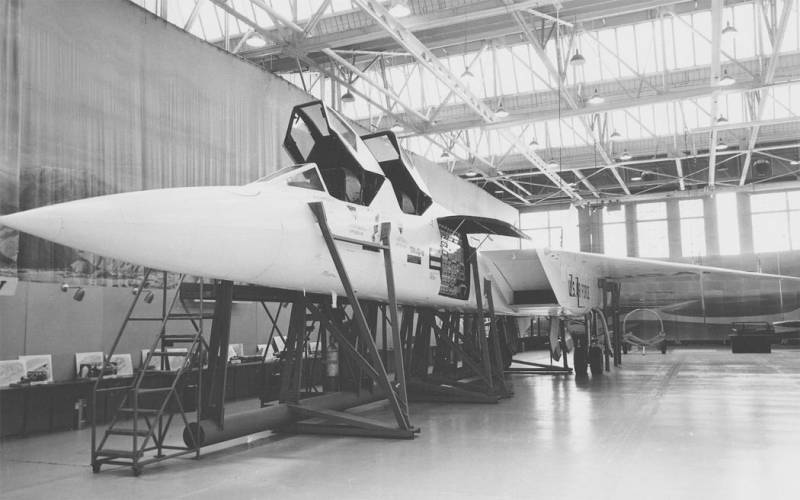 With the development of ICBMs, the very need to use a “swarm” of strategic bombers, which could be shot down while approaching the target, disappeared. At the same time, the emergence of more advanced guided cruise missiles, which could be launched from submarines and surface ships, also played a role in the closure of the XF-108 Rapier project. New types of missile weapons neutralized the value and capabilities of the Rapier, which turned into an expensive toy without specific tasks. By 1960, the project was completely stopped.

At the same time, it cannot be said that the XF-108 Rapier project for the North American company turned out to be absolutely useless. Many developments were later used to create both experimental and serial machines. In particular, the fuselage of the aircraft almost unchanged migrated to the serial supersonic deck bomber North American A-5 Vigilante, which embodied the concept of a supersonic aircraft with a more modest maximum flight speed – in the area of ​​two Machs.