All conflicts in recent years have been accompanied by the use of unmanned aircraft. At the same time, the intensity of its application and the range of tasks being solved gradually grew.

For many years, the United States remains the leader in the field of UAVs, especially large reconnaissance drones and strike vehicles. Israel has also made good progress in this area, and, as the war in Nagorno-Karabakh has shown, Turkey. In the near future, Turkish attack drones will definitely be in demand in the international arms market.

The EU decided to keep up with the emerging trends and, since the second half of the 2010s, has been actively developing its own large strike reconnaissance drone Eurodrone as part of the European MALE RPAS (Medium Altitude Long Endurance Remotely Piloted Aircraft System) program.

The device under development is distinguished by its impressive dimensions and weight. The drone, which in the future should compete with the American “Reaper” MQ-9 Reaper, will be more than twice as heavy as the competitor.

What is known about the Eurodrone program

The development of a promising European medium-altitude strike-reconnaissance drone of long autonomy of action began on May 18, 2015. Initially, three countries worked on the project: Germany, France and Italy. Later they were joined by Spain. 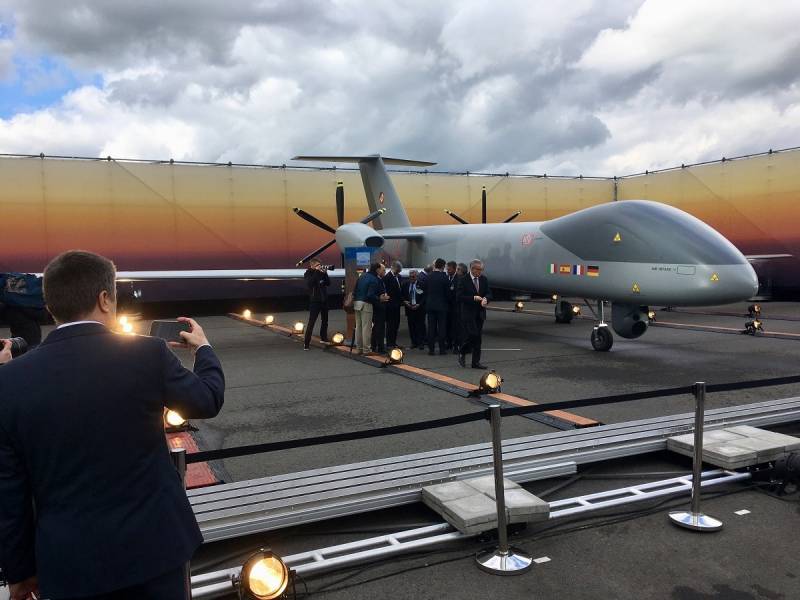 Full-size mockup of the Eurodrone drone

Initially, the program was considered on the horizon for 10 years, with deliveries of the first drones in 2025. But, apparently, the project turned out to be too ambitious. Therefore, the timing of its implementation was shifted.

Today, the first flights of the new drone have been postponed to 2024–2025. And the delivery of the first complexes to service is scheduled no earlier than 2028.

For different European project participants, the delivery start dates may differ. At the same time, contracts with general contractors and subcontractors of the project are planned to be signed at the beginning of 2021.

Three major European aircraft manufacturers are participating in the Eurodrone drone program: Airbus, Dassault Aviation and Leonardo. They have been working on the concept and appearance of the future drone since September 2016.

The first demonstration of a full-size mock-up of the future European strike and reconnaissance UAV Eurodrone took place in April 2018 in Berlin at the Berlin Air Show.

According to data from the French press, the EU’s initial plans to acquire new strike-reconnaissance drones are known. According to the famous French newspaper La Tribune, a group of European countries has already formed an order for 21 Eurodrone MALE RPAS complexes (each complex consists of three unmanned aerial vehicles). So the total initial order is already estimated at 63 UAVs.

The total amount of the transaction, including the costs of developing the drone, is estimated today at 7.1 billion euros.

Another advantage in the French Ministry of Defense is called lower operating costs. It is expected that, despite its twice the weight, the new European drone will be able to confidently compete with American vehicles in the economic plane. The French military estimates the flight hour of the new European drone at 3000 euros, while the flight hour of the American MQ-9 Reaper UAV is 4000 euros.

If everything is done as intended, Eurodrone will be a quarter more economical to operate. Which is very important in the modern world. 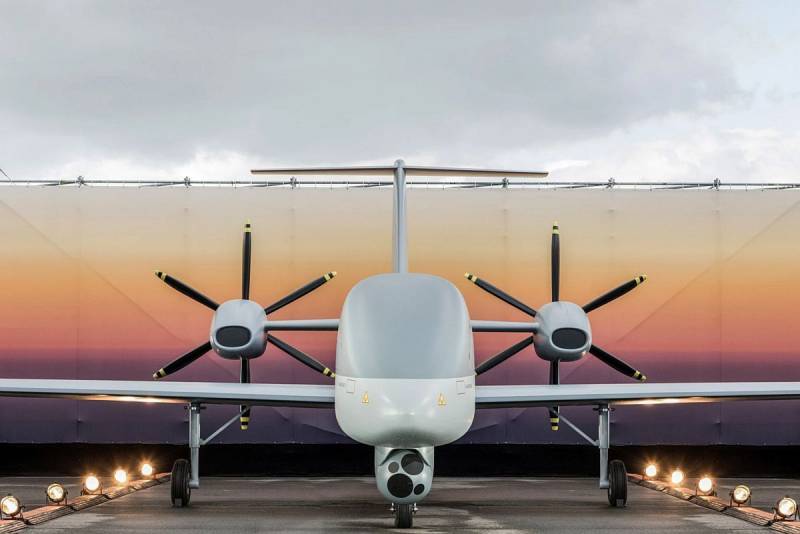 Characteristics and capabilities of the EU drone

Not much is known about the characteristics and capabilities of the promising European strike-reconnaissance drone Eurodrone.

First of all, the information that has already been disclosed at exhibitions in Europe is available.

In the air, the device will have to solve traditional tasks: reconnaissance and surveillance, target detection and tracking, ground targets attack. The UAV will be able to work around the clock in various weather conditions.

In order to better imagine the dimensions of this UAV, one can compare it with the Su-25 attack aircraft, which has a wingspan of 14.36 meters, a length of 15.05 meters, and a normal curb weight of about 14 tons.

At the same time, the drone being developed in Europe is superior to its American counterpart. The MQ-9 Reaper has a length of 11 meters, a wingspan of 20 meters, and a maximum take-off weight of 4,760 kg.

The fact that the European drone is more than twice as heavy as the American one has already attracted criticism from politicians. For example, the platform

“As too heavy, expensive and not attractive enough for export”,

And the French politician Christian Cambon, pointed out that

It can be noted that publications in the media and public statements regarding this drone (especially in economic matters) are still multidirectional. 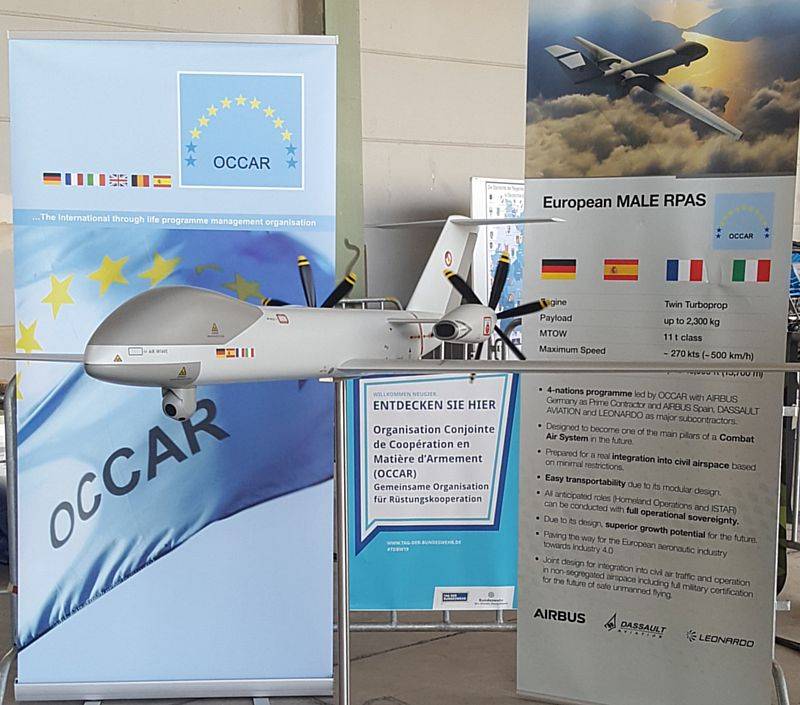 Externally, a promising European shock-reconnaissance drone is an aircraft made according to the traditional low-wing design with a T-shaped tail.

The drone received a normal sweep wing and a long, elongated fuselage, which makes it akin to the American MQ-9 Reaper UAV. Like the American drone, the European counterpart will receive a combined optoelectronic and thermal imaging reconnaissance and sighting station on a spherical suspension in the front of the fuselage.

A distinctive feature of the European drone is the presence of two turboprop engines with pushing propellers. The engines are located in the rear of the aircraft.

It is believed that the condition for the installation of two engines was dictated by Germany, which pays great attention to flight safety. The Germans hope that the two-motor scheme will make the device more tenacious, safe and reliable.

Safety is especially important given the size of the drone and its imminent operation over densely populated and urbanized areas of Europe. This is also important when you consider that the device is planned to be used for civilian purposes.

It is worth noting that the Europeans have not yet decided on the engines for their drone.

Currently, the French company Safran Helicopter Engines (Safran HE), which promotes the Ardiden TP3 engine (maximum power 1700-2000 hp), and the American company General Electric are competing with each other. The latter is pushing its turboprop engine through its Italian subsidiary Avio, which has partly Europeanized the GE Catalist engine developed for the Cessna Denali aircraft.

It is noteworthy that the presented versions of the American engine are less powerful. Those that are installed on “Tsesna” develop 1300 liters. with. And the maximum power of the GE Catalist is most likely limited at this stage to 1600 hp. with.

The issue with the engines, most likely, will be resolved in the financial plane and in the area of ​​lobbying interests.

At the same time, the French Ministry of Defense is naturally interested in Safran HE engines.