Breech of the carbine “Cosmopolitan” (type 2) manufactured by Gwyn & Campbell

Military affairs at the turn of the eras. After the release of the three previous articles about the carbines of the American Civil War, I thought that the topic was settled. It was not so! Everything turned out simply according to one of the readers of the site, who wrote: “You might think that in the USA, then, almost under every bush there was an inventor of a carbine!” Well, maybe not under each one, but there were many inventors of carbines. And a lot because a lot of metal was used for rifles and they were cheap, because they were purchased in large quantities. Carbines were purchased in limited quantities, they required little metal, but were expensive, which is why everyone took up their production. The advantage was also that the hammers were ready, the triggers were also produced, that is, select and use ready-made ones, and in addition, defective rifle barrels were used for carbines. The defective part, for example, with a cavity, was cut off – and where could such a wonderful “pipe” be attached? In any case, this could well be, since the Americans were very economical producers. That is, many carbines, like AR-15 rifles today, were already assembled “from cubes”, and on some carbines under the barrel they did not even have a forend. What for? An extra tree increases the cost of production, and a rider, shooting from a horse, often does not shoot, so he will not burn his hands, and besides, the cavalrymen have suede gloves, not like the infantry.

So, today we, so to speak, are picking up the remnants of all that carabiner splendor, which is the place in the United States since 1861 (and a little earlier) and until the end of the war in 1865 … 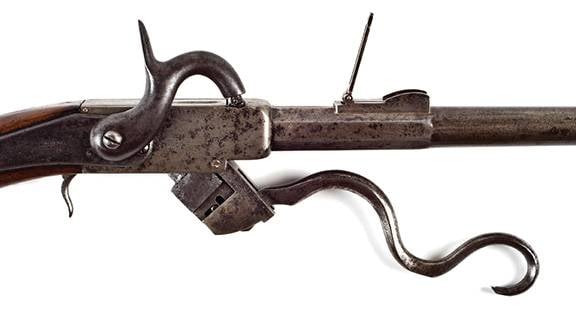 And this is how “Cosmopolitan” looked when it was charged

Well, we will start with a carbine with an unusual name “Cosmopolitan”.

But in this photo, an extremely rare Cosmopolitan rifle with a firing range of 800 yards (i.e. about 720 m)

An early version (type 1) with a “double loop” trigger guard; the weapon was not very comfortable to hold

In 1859, Henry Gross of Tiffin, Ohio received a patent for a rifle that used a very simple drop-block mechanism. A feature of the rifle were two triggers, enclosed in a “double loop” of the trigger guard, and the rear hook released the trigger guard lever, which went down to open and lower the bolt. At the same time, he stood in an upright position and a paper cartridge could be inserted into it with a bullet forward. When the lever returned to its original position, a shock capsule was put on the brandtube, all that was left was to cock the hammer and fire. The first patented rifle was produced by the Cosmopolitan Arms Company in Hamilton, Ohio, an arsenal owned by Edward Gwynne and Abner K. Campbell. 100 rifles and about 1,200 Cosmopolitan carbines were produced, many of which differed in the shape of the staple, which became more elegant from model to model.

In 1862, the Cosmopolitan Arms Company was awarded a contract to produce 1,140 carbines for the state of Illinois. Many of these carbines were used by the Illinois 6th Cavalry during the famous Grierson Cavalry raid during the Battle of Vicksburg. The cavalrymen generally spoke of this carbine as an effective weapon, but due to the lack of a wooden forend on the barrel of the carbine, it was difficult to hold in their hands after frequent shots. Of course, the cavalrymen were supposed to have suede gloves, but they were not always there, and in summer they were very hot in them. Although the rifle’s scope was increased to 700 yards, it was not as accurate as Sharps, and it was difficult to convert it to metal cartridges, and converting it to Barnside’s cartridges would violate his copyrights.

Known primarily for his pistols, William W. Marston of New York has created over three hundred beautiful rifles using his patented breech loading system. The shooter loaded the Marston rifle by pulling the trigger guard, which pushed the bolt away from the barrel. A special cartridge was inserted through a rectangular slot in the receiver on the right side of the bolt. This patented cartridge looked like a blue cardboard cylinder with a greased leather disc inserted into the back. After igniting the gunpowder in the cartridge, it served as an elementary gas seal. The next cartridge moved the disc into the barrel, and then was pushed out of it by a bullet when fired. This was believed to help clean the bore and reduce fouling. In his advertising brochure, Marston wrote: “Rifles that use these cartridges never require wiping, and their barrel will shine brightly from the inside even after a thousand shots.” Marston’s rifles were popular and were produced in different calibers and with beautiful engravings. Most of his rifles were equipped with two triggers, and the trigger itself was the front one, but the rear one blocked the trigger guard. The very rare version of the .70 caliber smoothbore shotgun was also produced according to the same scheme.

In 1858, George Washington Morse, nephew of Samuel F. Morse, received a patent for a very simple shutter device designed to use an experimental centerfire cartridge of his own design. In search of a way to rework old muzzle-loading rifles into bolt-action rifles, the US government decided to accept its design and began reworking old rifles at the Springfield and Harpers Ferry arsenals. The military promised him a fee of $ 5 for each of the 2,000 guns they decided to convert to Morse code. But then the air smelled of gunpowder, and most importantly, Morse ended up in the southern states, and the deal fell through. In addition, he ended up on the territory of the southerners, who appointed him … superintendent of the Armory of the city of Nashville. After Harpers Ferry was captured by the Virginia militia, Morse demanded his equipment and set up parts for a new Morse carbine in Nashville. The federal advance into Tennessee led Morse to Atlanta, where he completed the development of his carbine and demonstrated a prototype. General Sherman’s march to Georgia forced him to evacuate a second time and begin production at an arsenal in Greenville, South Carolina. In 1864, Morse was ordered to arm the South Carolina militia with a thousand new carbines and tried to carry it out. 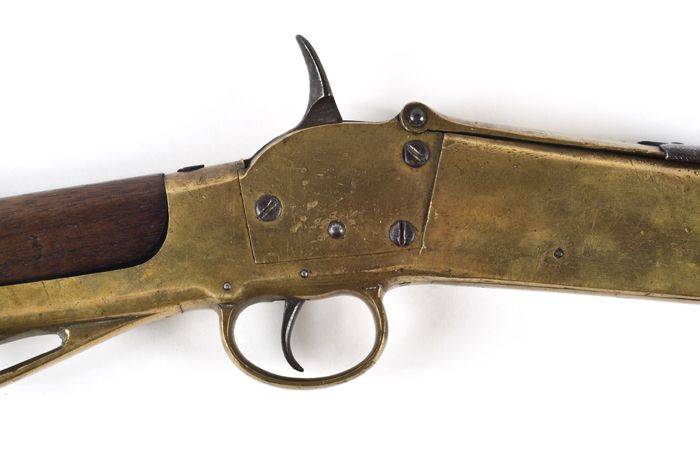 The receiver of the Morse rifle was made entirely of brass. The bolt control lever was also brass. The barrel, trigger, springs and bolt were steel!

Like many Confederate gunsmiths, Morse made extensive use of brass, since there was a lot of it in stock, and working with it did not require highly skilled workers. Each Morse rifle, with a brass frame, receiver and hardware, was fitted with a cartridge belt containing twenty-four brass cartridges housed in separate tin tubes. The carbine was loaded from above. To do this, the shooter had to raise the lever, which, in turn, pushed the bolt back and opened the chamber at the same time. A .50 brass cartridge was inserted into the chamber, the lever was pulled down, and the bolt locked the cartridge in the chamber. When the trigger was pressed, the firing pin passing through the bolt hit the cartridge primer and fired a shot. 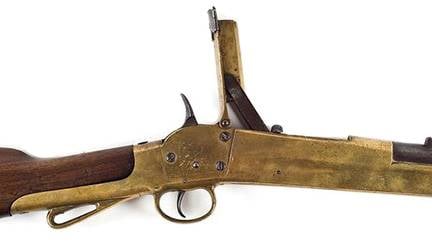 Morse carabiner. The lever that controls the shutter is at the same time the cover of the receiver. The lever could be raised by sliding back the steel bracket at the end of the lever. The trigger was positioned offset to the right so that it did not interfere with the lifting of the lever. But the brass bracket under the butt neck did not play any special role. And why it was attached is not clear. Excessive metal consumption, no more!

Interestingly, his development entered the commercial sale in the form of kits, which, with a single chamber, included three interchangeable barrels at once: a carbine, rifle and smooth-bore shotgun of several calibers! The price of the set was high – $ 125, so they sold poorly, much to the chagrin of the inventor.

After the victory of the northerners, Morse returned to Nashville, where he again became superintendent of the Armory and continued to engage in invention.

Another carbine was developed and produced by James W. Armstrong and John Taylor of Augusta, Kentucky. They were business partners and co-owners of US patent No. 37025 dated November 1862.

The carbine was manufactured and offered to the army in the same year, but the army refused it. The barrel of the carbine turned on a longitudinal pin, opening the chamber, while the extractor was automatically activated and the breech opened. The barrel turned to the right for loading. Caliber .41. Side fire cartridges. Weapons are rare and therefore highly prized among collectors.