Means of the Korkut complex. Photo by ASELSAN

The ground forces of Turkey have a large number of various missile and artillery systems of military air defense. One of the newest designs is the Korkut anti-aircraft artillery system. It entered service several years ago and remains in serial production. The troops managed to master this technique and even tested it in a real operation.

At the turn of the two thousandth and tenth years, the Turkish army took care of the issue of updating self-propelled anti-aircraft artillery. At that time, obsolete American-made M42A1 Duster ZSU was in service, which needed replacement. It was decided to develop its own project of a similar combat vehicle with modern equipment and improved characteristics.

In June 2011, a contract was issued for the development of a project with the code “Korkut”. ASELSAN A.Ş. was chosen as the main contractor. The chassis for the new complex was to be provided by the FNSS company, and the weapons and related equipment were ordered by the MKEK corporation.

Since 2013, prototypes from the promising complex have been demonstrated at Turkish exhibitions. Testing of the technique continued until the fall of 2016, when Korkut was recommended for adoption and production. By this time, a contract for the production of several dozen complexes had already been signed.

The first agreements on the serial production of “Korkut” date back to the end of 2014. Then it was announced plans to purchase 14 anti-aircraft systems, each of which includes three Korkut SSA self-propelled guns and one Korkut KKA control vehicle. At the expense of 42 ZSU and 14 control vehicles, it was planned to re-equip 14 anti-aircraft platoons of the ground forces. 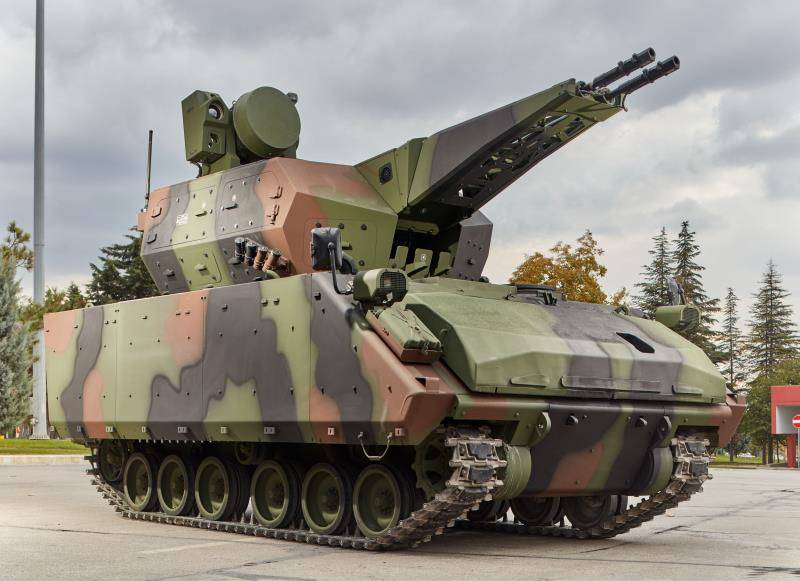 The Ministry of Defense and ASELSAN signed a firm contract for the serial production of self-propelled guns only in May 2016. At the end of the year, ASELSAN and FNSS agreed to supply the required number of tracked chassis within several years. In March 2017, a new contract appeared from the military department, clarifying the features of the program.

In accordance with the final version of the contract, ASELSAN was to deliver 56 units. vehicles of two types or 14 platoon sets. The first products were planned to be accepted as early as 2018, and the latter will be sent to the customer only in 2022. Thus, production continues right now, and a significant part of the contract has already been completed.

The exact number of complexes built is unknown. IISS’s The Military Balance 2020 indicates the presence of at least 13 combat vehicles. Other sources give others, incl. differing data. At the same time, they all agree that the deliveries have not yet been completed, and in the foreseeable future the Turkish army will receive new complexes consisting of two types of vehicles.

In 2017, it was reported about the possible purchase of “Korkutov” by the armed forces of Pakistan. Soon, Pakistani specialists were able to study this technique during testing. However, these events were not continued. The supply contract has not yet been concluded, and the possibility of its appearance remains in question.

The anti-aircraft complex includes two main means: the Korkut KKA control machine and the Korkut SSA SPAA itself. They are built on the unified ACV-30 amphibious tracked chassis and are capable of operating in the same battle formations with other armored vehicles of the Turkish army, providing it with protection from various types of air attack. The possibility of combating aircraft and helicopters, cruise missiles and other types of guided weapons, i.e. with the main threats to troops on the march or in positions. 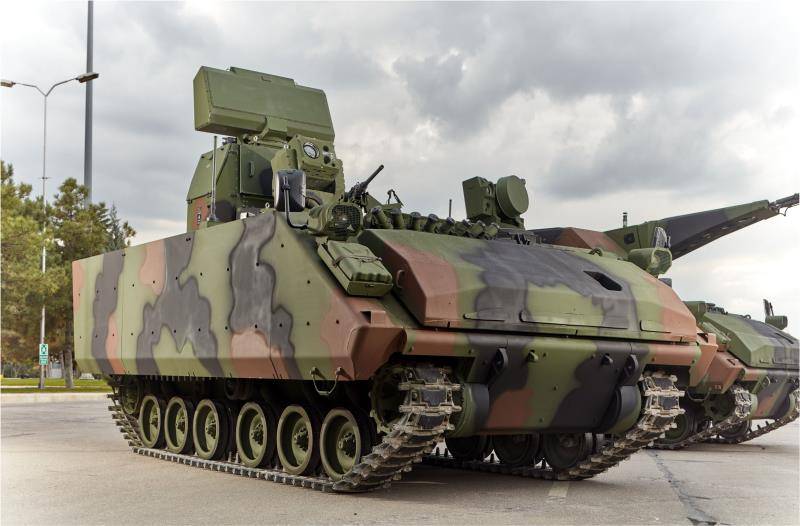 A mast with radar and optoelectronic stations is installed on the roof of the Korkut KKA control vehicle. The main means of tracking the situation in the air and on the ground is a three-coordinate circular-view radar developed by ASELSAN with a target tracking range of up to 70 km. There is equipment for identifying “friend or foe”. In the near zone, it is possible to use an optoelectronic unit with day, night and rangefinder channels.

The equipment for data processing, control and communication, as well as two workstations for the commander and the operator, are installed inside the building. The Korkuta control vehicle is capable of finding and tracking targets, determining the degree of their danger to guarded objects, transmitting data about them to a higher headquarters, and also issuing target designations to subordinate ZSUs. One control machine is capable of servicing up to three self-propelled guns.

The crew of the control vehicle consists of three people: the driver, the commander and the system operator. Access to the inside of the machine is provided by a standard stern ramp. In case of a collision with the enemy, the crew has a rifle caliber machine gun.

Anti-aircraft self-propelled gun Korkut SSA is built on the same chassis, but carries different equipment. An uninhabited tower with a pair of 35-mm automatic cannons Oerlikon GDF-002, produced under license at MKEK factories, is installed on the pursuit. The gun mount is stabilized in two planes. There are magazines for 400 rounds with a linkless feed, providing a quick change of the type of shot. The cannons are compatible with programmable fuses.

Search for targets and fire control are carried out using radar and OLS on the tower. The radar from ASELSAN provides target tracking and automatic weapon guidance. The locator is duplicated by optics, which protects the ZSU from electronic warfare. There are separate programmers for working with projectiles. 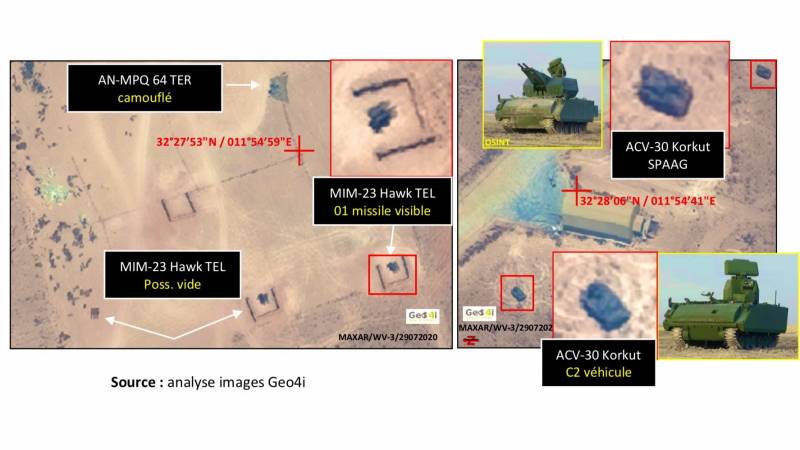 The crew of the ZSU Korkut SSA includes three people: the driver, the commander and the gunner-operator. All systems and weapons are controlled remotely; combat work is performed in semi-automatic and automatic modes. The main method of work involves interaction with the control machine and firing at its target designation. In this case, it is possible to use the ZSU independently.

The total rate of fire of a pair of Oerlikon cannons is 1100 rds / min. Effective range for air targets – 4 km. It is possible to defeat due to a direct hit, however, to combat air targets, the firing mode with programmed projectile detonation on the trajectory is the main one.

In formation and in battle

In 2018-2020. the Turkish army received at least 10-13 combat vehicles of the Korkut complex, and deliveries are continuing. No later than 2022, 14 ordered kits will be built and delivered to the troops. Apparently, this will be followed by a new contract for a comparable amount of equipment, which will later bring the number of ZSU to an acceptable level.

It should be noted that now “Korkut” remains the only anti-aircraft artillery self-propelled gun in the Turkish army. In previous years, in parallel with the process of creating this complex, the old “Dasters” were withdrawn into the reserve. Now at least 260 of these ZSUs are at storage bases, and, most likely, they will soon begin to be dismantled as unnecessary.

Despite the small number, ZSU Korkut have already managed to take part in a real operation. In mid-January 2020, it became known that several complexes of this type had been transferred to Libyan territory to cover the Turkish contingent and friendly local formations. In mid-August, new messages appeared in this regard, incl. satellite images of deployed complexes. 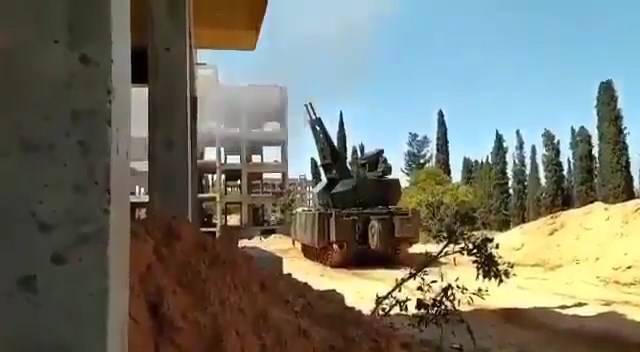 Shooting at an unknown target, presumably November 2020. Still from a video from Youtube / Vedat Kaplan

It is curious that, until recently, reports on the combat use of anti-aircraft systems were not reported. Only a few days ago a video, several seconds long, showing the use of “Korkut” in Libya, got into the public domain. It captures a combat vehicle firing at an aerial target. It is not known what object came under fire and how this episode ended.

Apparently, the plans for the Korkut anti-aircraft complex are being carried out without significant deviations from the schedule and allow solving the assigned tasks. The Turkish army has already received a certain number of combat vehicles and control vehicles, but their number is still much lower than the needs of the ground forces – and less than the number of decommissioned equipment of its class. In addition, new ZSUs are already being used in combat zones, but so far without any noticeable results.

Thus, the real prospects of the Korkut complex still look ambiguous. From a technical point of view, this is a fairly good system with good characteristics, quite capable of coping with the tasks set. On the other hand, there are still few such complexes and they cannot independently provide full-fledged protection of troops. It is not known whether it will be possible to change this situation for the better. The plans for the coming years still allow us to count on such changes, and everything depends on their successful implementation.