Self-propelled unit 2S38 from the Derivation-Air Defense complex. Photo of the Ministry of Defense of the Russian Federation

In the interests of military air defense, a self-propelled anti-aircraft artillery complex 1K150 “Derivation-Air Defense” is being developed. The main focus of this project is directly on the 2S38 anti-aircraft self-propelled gun with a 57-mm automatic cannon. In addition, new ammunition and means of ensuring combat work are being created.

The “main caliber” of the 1K150 complex is the modern 57-mm 2A90 automatic cannon. This weapon was developed by the Nizhny Novgorod Central Research Institute “Burevestnik” (part of the NPK “Uralvagonzavod”) and is proposed for use on a new family of combat modules along with different platforms.

The 2A90 product is based on the design of the S-60 gun, created back in the forties. The new cannon retains the old design chamber for 57×348 mm SR unitary rounds. Due to this, full compatibility with existing shells is ensured, which makes it possible to use the accumulated stocks. In addition, completely new ammunition is being developed with certain features.

The first in the 2A90 and 1K150 ammunition were the existing shots with the 53-OR-281 fragmentation tracer grenade and the 53-BR-281 armor-piercing tracer projectile, developed in the past for the S-60. Such shots have a mass of 6.6 kg; the projectile weighs 2.8 kg. Shrapnel ammunition carries a charge of 153 g of explosive, armor-piercing – only 13 g, but is capable of penetrating up to 100 mm of armor at a distance of 1 km. 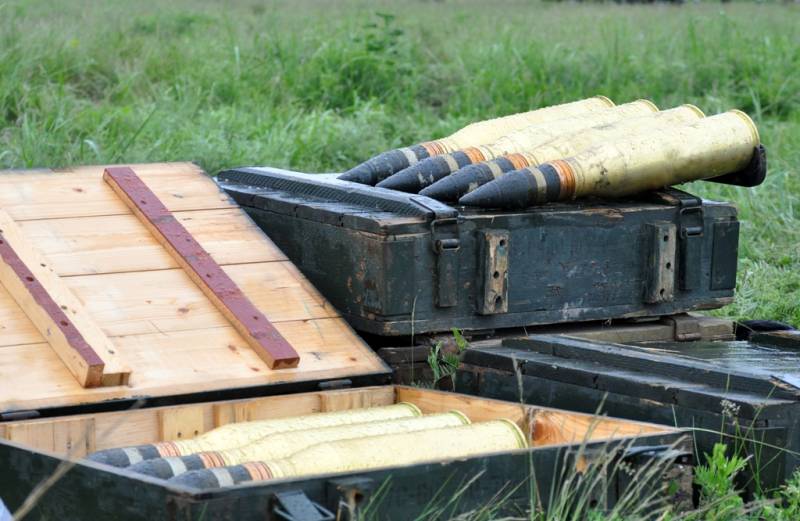 The rounds of the “281” family are still in the army warehouses, and “Derivation-Air Defense” can use this stock. However, old ammunition has limited performance. First of all, the claims are caused by the characteristics of accuracy and accuracy. The disadvantages of old shells do not allow to fully realize the advantages of modern guns and fire control systems.

A new generation of shells

Several years ago it became known that in the Design Bureau of Precision Engineering. A.E. Nudelman is working on the appearance of a promising guided artillery projectile (UAS) in 57 mm caliber. Later, some technical details of such a project became known.

The high-explosive fragmentation UAS with an unknown index in its dimensions had to correspond to the existing ammunition and be used with a standard 348-mm sleeve. At the head of the projectile, it was proposed to place a single-channel steering machine and rudders that could be laid out in flight. The central part of the hull was given under the warhead, and a fold-out stabilizer and a laser radiation receiver were placed in the bottom.

A projectile of this design should “fly along the beam” and hit the target due to the proximity fuse. According to calculations, the 57-mm product was supposed to have a mass of just over 2 kg and carry up to 400 g of explosives. Such a charge made it possible to obtain power at the level of 76-mm artillery shells. 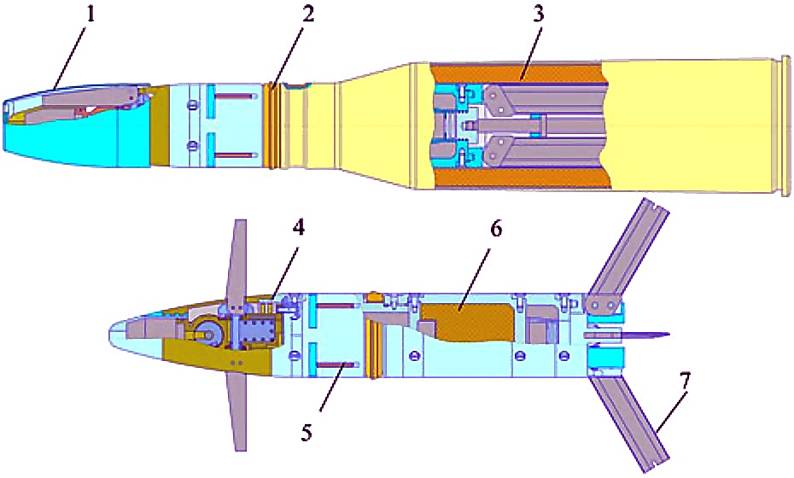 In parallel, the so-called. multifunctional projectile. He has no means of guidance, but receives a programmable fuse with the ability to set the point of detonation. Such ammunition can be effectively used when firing at ground and air targets.

Earlier, there was news about the testing of new shells. So, last year, new products were tested by firing at UAVs. At the end of January, NPK Uralvagonzavod again spoke about the work on three new shells. Multifunctional, guided and sub-caliber armor-piercing projectiles have been created and are being tested. The exact characteristics of such products have not yet been disclosed.

To speed up and simplify preparation for combat work, the 9T260 transport-loading vehicle is included in the Derivation-Air Defense complex. It is capable of transporting a large number of various ammunition and transferring them to the 2S38 anti-aircraft self-propelled gun. The 9T260 model was first shown at one of the exhibitions of the past, and by now a full-fledged prototype has been brought into testing.

ТЗМ for 1K150 is built on the Tornado-U three-axle chassis from the Ural plant. A protected cabin and a large armored hull are mounted on the chassis to accommodate the payload. Access to cargo in several compartments is provided through hinged side doors, as well as through the aft door. For the convenience of the crew, folding side platforms are provided. The TZM kit includes a conveyor for transferring ammunition to a combat vehicle. All operations are carried out by a two-person calculation.

ТЗМ 9Т260 in the stowed position. Photo of the Central Research Institute “Burevestnik”

The 9T260 vehicle carries up to 592 unitary 57-mm shells in four compartments. There is also room for 10 boxes with 2 thousand cartridges 7.62×54 mm R and for two packs of 24 ammunition for the 902 “Tucha” system. The prepared calculation is able to fully load the TPM in 2 hours. Preparation for reloading ammunition onto a combat vehicle takes no more than 5 minutes. The transfer of a full ammunition load takes approx. 20 minutes. One TPM can simultaneously issue shells and cartridges to two SPGs.

Currently, all components of the 1K150 “Derivation-PVO” complex undergo various tests and confirm the declared characteristics. Last summer, Uralvagonzavod announced the completion of preliminary tests of the 2S38 combat vehicle. After that, the production of a pilot industrial batch of equipment started.

The state tests of the complex are planned to be completed in 2022. Soon after that, a decision is expected to launch mass production and supply equipment to the troops. The first complexes will enter combat units no later than 2022-23, and then a full-fledged re-equipment of the military air defense will begin.

Obviously, a full-fledged anti-aircraft artillery system with all standard elements will be involved in state tests. Both the 2S38 combat vehicle and the 9T260 transport and loading vehicle will go to the test site. In addition, the entire proposed range of ammunition, both old types and currently being developed, must pass the test with a new weapon.

It should be expected that the finished ZAK 1K150 “Derivation-PVO” will show itself well in tests and will be recommended for the series. Having entered the troops, it will give air defense units new advantages and provide a solution to a wider range of tasks. The increase in efficiency and the emergence of new opportunities are directly related to the development of promising ammunition and support equipment. 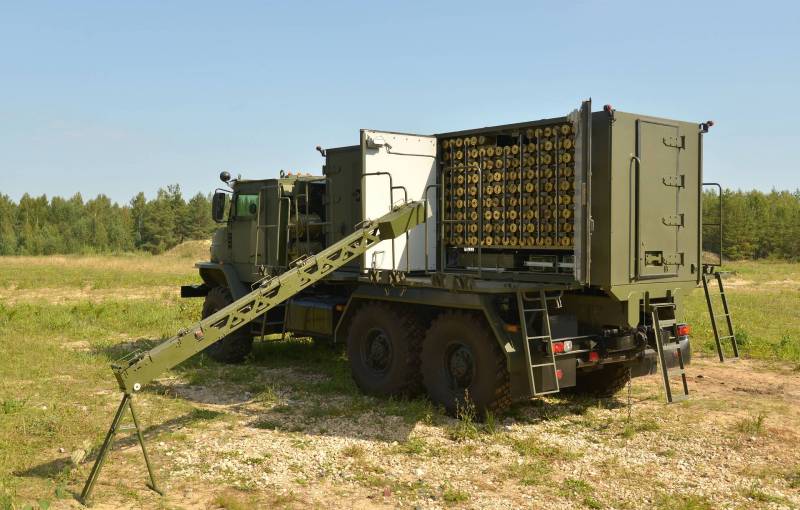 It is assumed that on the battlefield, the 2S38 machine will fight against front-line aviation, aviation weapons and unmanned aerial vehicles. In addition, shooting at ground targets is not excluded. The specificity of such work involves active shooting and a significant consumption of ammunition. Accordingly, the anti-aircraft self-propelled gun must be accompanied by an ammunition carrier.

The 1K150 complex includes a 9T260 TZM, which carries four full ammunition loads of artillery shells and is capable of transferring them to a combat vehicle in a minimum time. At the same time, the TZM, like a self-propelled gun, has protection against bullets and fragments, which reduces risks and is especially important due to the presence of a large number of shells on board.

Unlike anti-aircraft artillery of previous generations, the new “Derivation-Air Defense” receives effective digital fire control, which increases the effectiveness of fire. Also a positive factor is the use of modern means of communication, including the ZAK in the high-speed control loops of the military air defense.

Due to these measures, the complex, using even old types of projectiles, is able to show superiority over systems of a similar caliber of previous generations. For the further growth of characteristics, fundamentally new ammunition is being developed. For example, the announced UAS or a multi-purpose shot with a programmable fuse can dramatically increase the effectiveness of fire against both air and ground targets.

Thus, when developing a new small-caliber gun and artillery systems based on it, an integrated approach is used. It allows you to fully realize all the advantages of the increased energy of the 57-mm projectile and to obtain the maximum possible characteristics. The result of this approach in the form of ready-made samples will go to the Russian army in the coming years.