At the turn of the forties and fifties, the Soviet command took up the issue of replacing the outdated SU-76M and SU-100 self-propelled artillery mounts. Several new projects were launched, but not all of them gave real results. One of these projects led to the emergence of the Object 416 ACS, built using a number of original solutions of various kinds. However, the excessive complexity and inconvenience of operation did not allow this sample to pass further tests.

At the design stage

The development of a new ACS, which soon received the code “416”, was set by the decree of the Council of Ministers of the USSR dated October 15, 1949. The Kharkov plant # 75 was appointed the main executor of the work. The customer demanded to create a new combat vehicle with an armament in the form of a 100-mm rifled cannon and enhanced armor, capable of fighting tanks and fortifications. The draft design and layout of the fighting compartment should have been submitted in the first quarter of the next 1950; a full-fledged prototype was expected by the end of the year.

The first version of “Object 416” in the form of documentation and a full-size model was ready in March 1950. The design team headed by P.P. Vasiliev proposed an armored vehicle with a front-engined layout with the placement of the entire crew in a fighting compartment with a full-revolving turret. The main armament was the D-10T cannon. The combat weight, according to calculations, reached 24 tons.

The mock-up was presented to the Scientific and Technical Committee of the GBTU, and the latter made some recommendations. So, the car was considered overweight. The parameters of the D-10T gun were called insufficient and demanded to replace it with the more efficient M-63 from the Perm plant No. 172. There were also proposals for the placement of the crew, ammunition and other components.

The project change took just over a month, and in May it was again presented by NTK GBTU. On May 27, the committee approved the preliminary design and allowed the transition to the technical design stage. This work continued until the fall; On November 10, the technical design was approved, after which the development of working documentation began. At this stage, the project was revised again, and its final version was ready in May 1951. In the summer, the assembly of individual units for testing began before the construction of a full-fledged prototype.

The promising “Object 416” had specific requirements in terms of the combination of protection, weapons, mobility and mass. All this made engineers look for and work out fundamentally new solutions. So, for the first time in domestic practice, the entire crew, including the driver, was placed inside the tower. In addition, a diesel engine DG of an unusual layout for that time was used, which had minimal dimensions.

During the revision of the original project, significant changes were made. By lightening the unprotected parts, the booking was strengthened, the power plant was improved. The pneumo-electric controls were replaced by hydraulic ones. About a third of the parts and assemblies were already in the series and did not require reorganization of production. 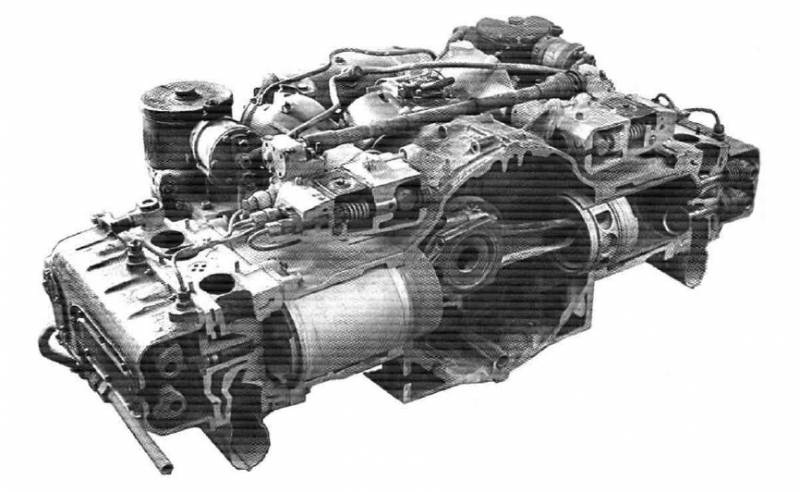 Split model of the DG engine, part of the cylinders is missing

For Object 416, an original armored body was designed, welded from sheets with a thickness of 20 to 75 mm, with maximum protection of the frontal projection. The front part of the body stood out for the power plant units; the entire feed contained the fighting compartment. A cast turret with a maximum armor thickness of 110 mm was installed on it. The fighting compartment actually “stood” on the bottom of the hull, which made it possible to reduce the height of the vehicle and, in general, reduce the area of ​​the frontal projection.

The power plant was built on the basis of a 12-cylinder boxer DG engine with a capacity of 400 hp. The transmission included a dry friction clutch, a two-shaft five-speed gearbox, a reduction gear, two two-stage planetary swing mechanisms, and single-row final drives. The power was taken from the gearbox for the pumps of the hydraulic and pneumatic systems. The fuel system contained tanks with a total capacity of 420 liters.

The undercarriage on each side consisted of six single-disk road wheels with external shock absorption and torsion bar suspension. The leading lantern gear wheels were located in the nose of the hull.

The main armament of the “Object 416” was the 100-mm rifled gun M-63, made on the basis of the serial D-10T. She had a barrel length of 58 clb with a slotted muzzle brake. The gun mount provided vertical guidance in the range from -3 ° to + 15 °. When firing from a standstill, the turret rotation ensured firing in all directions, while on the move – within the front sector with a width of 150 °. Shooting was provided by the TSh2-22 telescopic sight and the S-71 panoramic sight. 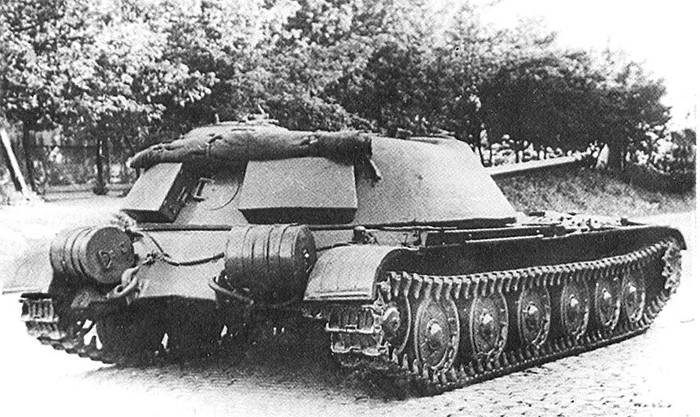 View of the stern

The gun received a chambering mechanism for unitary shots. There were also mechanisms for feeding a shot to the loading line, which simplified the work of the crew. After the shot, the bore was blown through with compressed air. Ammunition consisted of 35 different types of shells. The mechanisms used allowed one loader to provide a rate of fire of up to 5-6 rds / min.

The auxiliary weapon consisted of one coaxial SGM machine gun with 1000 rounds of ammunition. The self-propelled guns also carried two large smoke bombs at the rear of the hull with the possibility of dropping.

The car was driven by a crew of four. To the left of the gun, one after another were the gunner and the commander, to the right – the driver and loader. Hatches were provided in the roof of the tower. The crew had at their disposal a TPU-47 intercom and a 10-RT-26 radio station.

The driver, stationed in the fighting compartment, had to follow the road at all angles of rotation of the turret. For this, complex but effective solutions were applied. The driver’s workplace was made in the form of a separate unit rotating around a vertical axis. Automation monitored the position of the tower and, using a hydraulic drive, kept the driver parallel to the longitudinal axis of the hull. The road was monitored through periscopes on the hatch, synchronized with the workplace. The transfer of forces from the controls was carried out hydraulically. 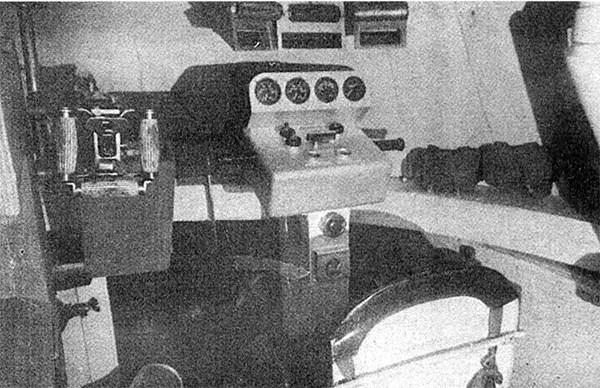 At the end of the summer of 1951, the assembly of individual units for testing began in Kharkov, after which they were planned to be used on an experimental ACS. The assembly of the prototype was supposed to be carried out during November, and at the beginning of December it was supposed to go out for testing. However, at this stage, problems began. The subcontractors did not have time to provide the turret and the engine, which is why the assembly of the experimental “Object 416” began only on March 29, 1952.

At the end of May, the finished car was shown to the customer, after which it was sent to the Chuguevsky proving ground for factory tests. From June 19 to November 12, the self-propelled gun demonstrated its characteristics and capabilities. At the same time, the power unit and the chassis were improved. The next stage of testing lasted until the summer of 1953 and pursued similar goals.

In August 1953 SAU “416” was sent to the Leningrad artillery range to check weapons. After the completion of these activities, in December of the same year, a control run was carried out over a very rugged terrain. In total, during the factory tests, the prototype traveled almost 3 thousand km across different areas and fired several dozen shots. All this made it possible to collect enough information to analyze and determine its prospects.

“Object 416” successfully combined a low weight and a high level of protection. In addition, the M-63 cannon provided a very high firepower for its time. One of the main differences of “416” was the original layout of the engine compartment and the crew compartment, which made it possible to drastically reduce the diameter of the hull and turret, and therefore increase survivability on the battlefield. The DG engine, despite the novelty of the design, showed itself well both on independent tests and on an armored vehicle. 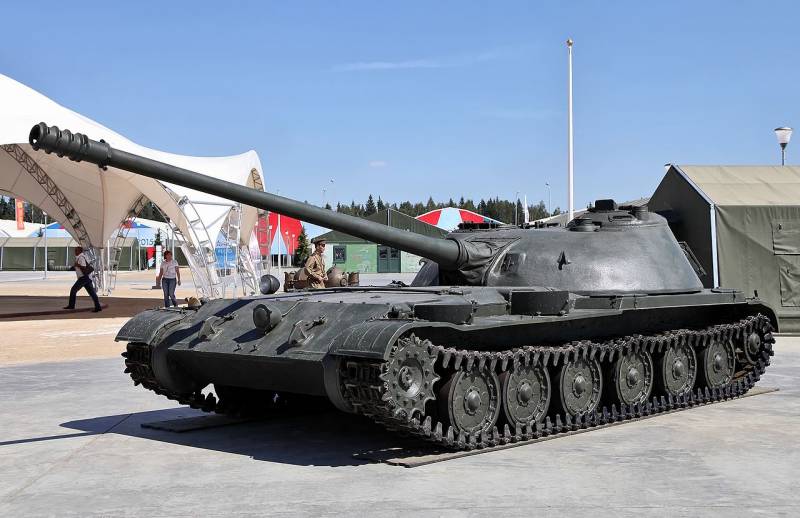 The novelty of the design and the original solutions in general were not a problem, but they led to significant difficulties. First of all, the inconvenience of the crew was noted: the rotating driver’s workplace was held parallel to the axis of the hull, but when the turret rotated, it moved perpendicular to it. Driving such a car required special skills. The rear of the fighting compartment turned out to be low and cramped, because of which the loader had to work while sitting or on his knees (this worsened his capabilities and affected the rate of fire). Finally, there were difficulties when shooting on the move.

Having considered the strengths and weaknesses, the project “416” decided to close. Also, the development of boxer diesel engines of the DG type was temporarily suspended. The only built self-propelled gun of a new type was sent for storage. Later she ended up in a museum (Kubinka), from where she recently moved to the open exhibition of the Patriot Park.

It should be noted that Object 416 was not the last example of its kind. In parallel with it, the 105 / SU-100P self-propelled gun was created with similar combat capabilities. After a long refinement, it even reached a small series and operation in the army. However, it soon became clear that promising anti-tank self-propelled guns needed more powerful weapons. The development of the 100-mm direction was stopped in favor of larger caliber systems.