Created by the gunsmiths of the American company Big Horn Armory, the AR-500 semi-automatic rifle is the most powerful in the world. At the same time, a unique model of small arms is built on the basis of the well-known AR-15 semi-automatic rifle, widely used by the American special services, police and actively sold on the civilian market. Today, US residents can purchase an AR-500 rifle chambered for the .500 Auto Max by paying at least $ 1999.

Created at the turn of the 1960s, the AR-15 semi-automatic rifle has become such a successful weapon platform that it still serves as an occasion for various adaptations, upgrades and modifications by manufacturers around the world. Especially many AR-15 style models are being built in the USA. Today, the AR-15 rifle is recognized by experts as one of the most modifiable small arms in history. In this regard, the American rifle competes with the domestic Kalashnikov assault rifle and endless weapon modifications built on its basis.

Big Horn Armory decided to go the beaten path, presenting their vision of the American classic of the arms world. At the same time, the company’s designers focused on increasing the power of the weapon, turning to a caliber that is unconventional for semi-automatic rifles. Usually in the .50 caliber, heavy machine guns or anti-material sniper rifles are created, for ordinary rifles this is a very rare caliber. However, a semi-automatic rifle of the same caliber as the famous Soviet machine gun DShK is now available on the US civilian weapons market. More powerful than a rifle on the civilian small arms market, perhaps, cannot be found.

The rifle was specially created for the .500 Auto Max cartridge, which, in turn, is a modification of the .500 Smith & Wesson (12.7×41 mm). The cartridge received minor changes aimed at the possibility of its use in automatic weapons. This ammunition is rightly considered the most powerful pistol cartridge in the world and the most powerful cartridge available on the civilian small arms market. 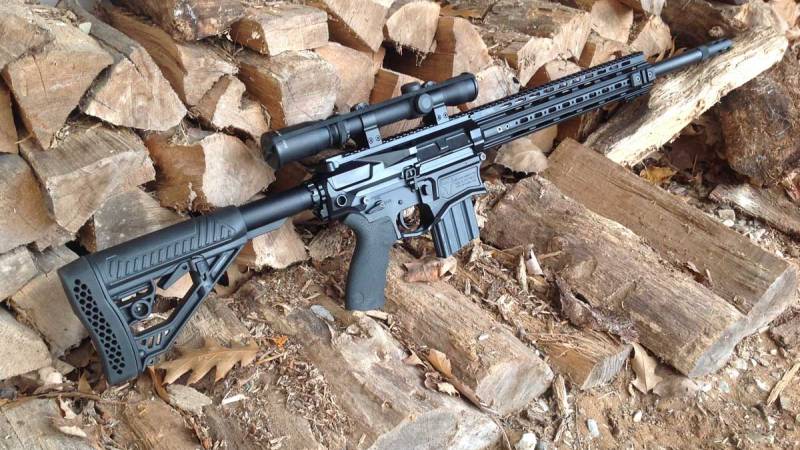 According to the developers, the AR-500 semi-automatic rifle is suitable for hunting any big game. With such a weapon, you can really go out, if not an elephant, then any bear, and even a medium-sized dinosaur, if they still lived on our planet. The Big Horn Armory claims that their rifle can kill “any animal dangerous to humans on Earth” and is also effective against a variety of vehicles. The latter attracts the attention of not only professional hunters to the rifle, but also special forces soldiers who could use this weapon to solve various tactical tasks.

Technical features of the AR-500 rifle

The AR-500 semi-automatic rifle inherited a lot from its famous progenitors. Structurally, it is close to the AR-10 model, which was the predecessor of the famous AR-15. At the same time, from the last rifle, it also has a sufficient number of solutions. There is no need to talk about the similarity in the appearance of these models. The recognizable silhouette of American AR rifles is unmistakable. The AR-500 rifle is functionally identical to other popular models in the wider AR family, so people familiar with the AR-15 should have no problem switching to the Big Horn Armory’s AR-500 heavy-caliber semi-automatic rifle.

At the same time, the AR-500 is made in a non-standard 12.7 mm caliber, and the manufacturer claims that it is the most powerful semi-automatic rifle when shooting at short and medium distances. Weapons are especially effective at a distance of up to 200 meters. According to the manufacturer, at this distance, the rifle is equally effective against prairie dogs and thick-skinned rhinos. In addition, at such a distance, it can easily deal with a classic American truck or a Peterbilt truck tractor.

The AR-500 rifle received a high-strength 18-inch barrel (457 mm), made of special stainless steel with a nitride coating. Such a coating gives the metal additional hardness and also provides high corrosion resistance. There is a thread on the muzzle of the barrel, which makes it easy to install a device for silent and flameless shooting or a muzzle brake-compensator on the weapon. A feature of the AR-500 model is the presence of an adjustable gas block. This solution allows you to use with a rifle cartridges with different bullet weights and equipment. 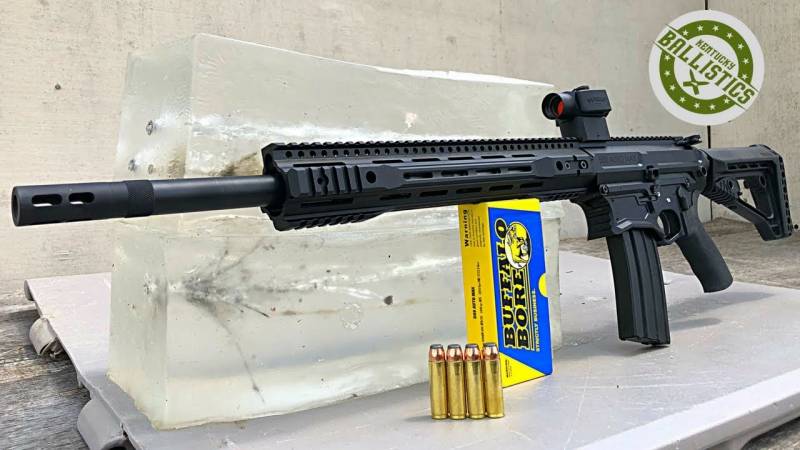 The designers of the AR-500 semi-automatic rifle traditionally paid great attention to ergonomics. At the disposal of the shooter is a full-size Picatinny rail, which occupies the entire upper part of the weapon and goes to the forend. This rail allows you to easily mount a wide variety of sights on the rifle. The designers also worked with the butt. The shooter has a telescopic, adjustable six-position buttstock that looks like those found on M4 rifles. The rifle butt is made of impact-resistant polymer. Also for the convenience of the user, the model is equipped with a rubberized pistol grip from the company Ergo, which provides a maximum level of retention even after moisture or dirt gets on it.

The rifle comes standard with a box magazine that holds five .500 Auto Max rounds. Magazine capacity is largely limited by the laws that apply in most US states for such weapons. At the same time, there is a version of the rifle with an increased capacity magazine – for 10 rounds.

A special feature of the AR-500 semi-automatic rifle is the .500 Auto Max cartridge, created on the basis of the .500 S&W cartridge, which has a huge stopping effect. According to the developers, with this cartridge, the AR-500 rifle will be suitable for hunting the largest game, including the African Big Five (elephant, rhino, buffalo, lion and leopard). And in this regard, the transition to a more powerful caliber is quite justified and obvious.

Numerous 5.56-mm cartridges of the AR-rifle family are poorly suited to hunters, since they do not allow them to confidently, and, most importantly, quickly cope with a medium-sized deer. Equally important is the fact that 5.56mm cartridges are ineffective against vehicles. Cartridges of this caliber are often unable to pierce and damage the engine, which means they are poorly suited for stopping various vehicles. Switching to 12.7 mm ammunition solves these problems. In addition, according to shooters who have already tried the AR-500 in action, the rifle’s recoil is not as great as it might seem. With the correct and reliable fixation of the rifle, it does not exceed the sensations of the recoil from firing a weapon with .300 Winchester Magnum cartridges (7.62×67 mm). 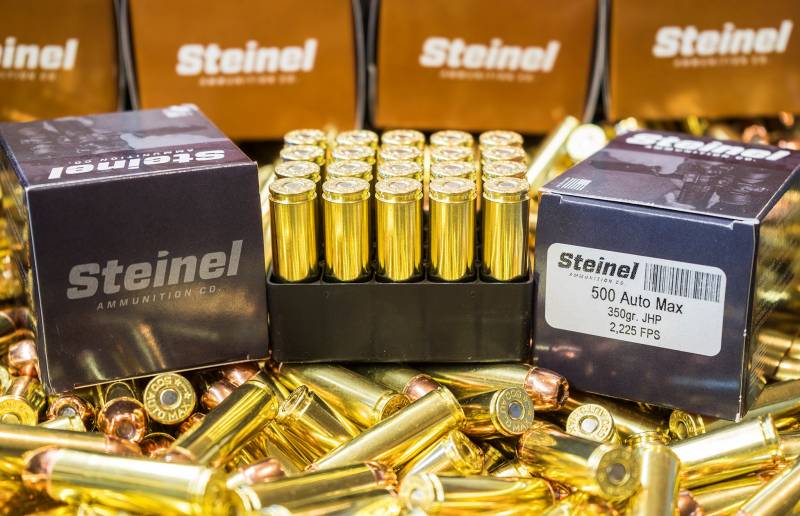 At the same time, the differences between the .500 Auto Max cartridge and traditional 5.56 and 7.62 mm ammunition are quite obvious. Such a bullet does not have a high speed, its maximum flight speed does not exceed 660 m / s (for a bullet weighing 25.9 g). As they say, you will feel the difference. A standard .223 Remington bullet weighs an average of 4 grams. And although the 5.56 mm ammunition can accelerate to speeds of over 1000 m / s, the energy of such a bullet does not even come close to the .500 Auto Max, which demonstrates truly colossal values. The AR-500 rifle, depending on the .500 Auto Max cartridges used, demonstrates a muzzle energy of 4000 to 6000 J. This is approximately three times the muzzle energy of a standard NATO 5.56×45 mm ammunition.

The AR-500 is definitely a niche weapon. The model was not created as a weapon for everyone. The same numerous clones of AR-15 in the popular 5.56 and 7.62 mm calibers are much more in demand on the market. But if you are out hunting big game or you need to be guaranteed to stop any vehicle, even a light armored car, then the AR-500 is what the doctor ordered. The rest of the model will scare off the relatively small effective firing range, small capacity of the standard magazine and high weight. By the way, the rifle itself weighs more than 4.5 kg, and with a magazine for five rounds, the .500 Auto Max can add another half a kilo, which also becomes a certain problem: after all, the shooter usually has to carry more than five rounds with him.