It is interesting when discoveries in the military field are made not by intelligence officers, but by journalists. There is no doubt where it is necessary and who needs to be in the know, but usually intelligence agencies around the world are in no hurry to shout about their super victories and share information with the layman. Yes, intelligence – they are …
Who turned out to be overly curious in the area of ​​the Bosphorus, we will not find out. However, at the disposal of the publication “Drive” was evidence that the destroyers “Porter” and “Donald Cook”, which entered the Black Sea, in their configuration, outwardly somewhat differed from ordinary ships.

Naturally, it took some tinkering to get confirmation, but if American journalists want to find information, they find it.

So, antenna modules were discovered, placed on the wings of the bridge, the origin of which leaves no other interpretation. These are antennas of the modernized electronic warfare complex AN / SLQ-32 (V) 6 SEWIP Block II.

There are, however, claims that these antennas are from Block II, but behind them is the next generation equipment, that is, Block III. American sources have been talking about such modernization for a long time, and now the relevant publications are spreading this news with might and main.

There is no direct evidence. There are only indirect ones, and that’s worth talking about.

And, besides, the destroyers have one more innovation: the photographs clearly show that instead of the aft ZAK Mk 15 Phalanx, the SeaRAM air defense system is installed. 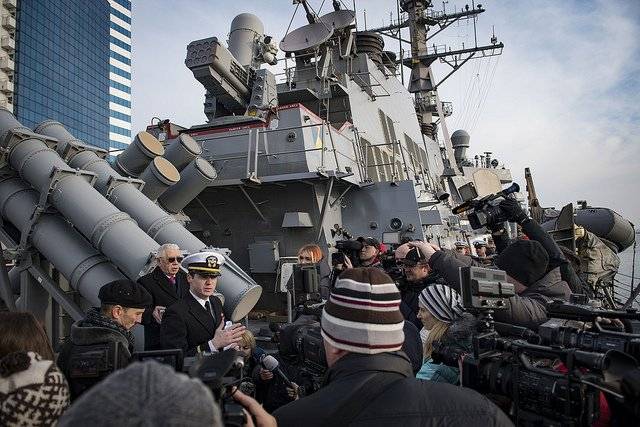 However, the last three water areas are a matter of the future, and not very distant. But we are primarily interested in the Black Sea. And that’s why.

The first four destroyers of the Arlie Burke class, which received the SeaRAM and AN / SLQ-32 (V) 6 SEWIP Block II air defense systems, are based in Spain, in the port of the small town of Rota, not far from Cadiz. It is just a stone’s throw from Gibraltar, about 4,000 km to the Black Sea, and the Arleigh Burke cruise at 20 knots takes a little more than 4 days.

It is clear that it is not worth talking about combat missions off the coast of China in Rota. And here is the Black Sea, the coast of which is really stuffed with anti-ship missiles and other unpleasant gizmos from the arsenal of Russian hospitality.

All four ships based in Rota have been upgraded. These are the famous in Russia “Donald Cook”, “Porter”, “Carney” and “Ross”.

So, the naval version of the RAM (Rolling Airframe Missile) missile, a short-range anti-aircraft missile. Designed for the defense of ships in the near air defense zone from massive attacks of low-flying cruise missiles. Nothing so supernatural, just a great compilation based on the time-tested Stinger, Sidewinder and other products. Collected by Raytheon from the USA and Germany’s RAMSYS. To date, SeaRAM has been installed on more than 100 warships of various classes of the US Navy, Germany, Greece, Korea, Egypt, Turkey and the United Arab Emirates.

Presumably, the modernized destroyers are equipped with the latest versions of the RAM Block 2 missile, which is distinguished by increased flight range and maneuverability.

As for the AN / SLQ-32 (V) 6, this system has gone through a rather long evolutionary path from a passive system of early warning, identification and direction finding of targets of versions 1 and 2 to version No. 6, the capabilities of which have greatly expanded.

Given that the passive and, accordingly, almost imperceptible detection and tracking system works together with an active jamming system of the “Sidekik” type. This puts the AN / SLQ-32 (V) 6, which is placed on destroyers and frigates, one of the first places in the world in terms of importance and efficiency.

This is despite the fact that the AN / SLQ-32 (V) has been in service with the US Navy since 1980. The age-old American principle of “modernize while you have the opportunity” has played the best here. Taking the successful AN / SLQ-32 (V) 1 and 2 system as a platform, adding new developments in the field of electronic warfare to it, as a result, we got a very impressive combat system at the output. 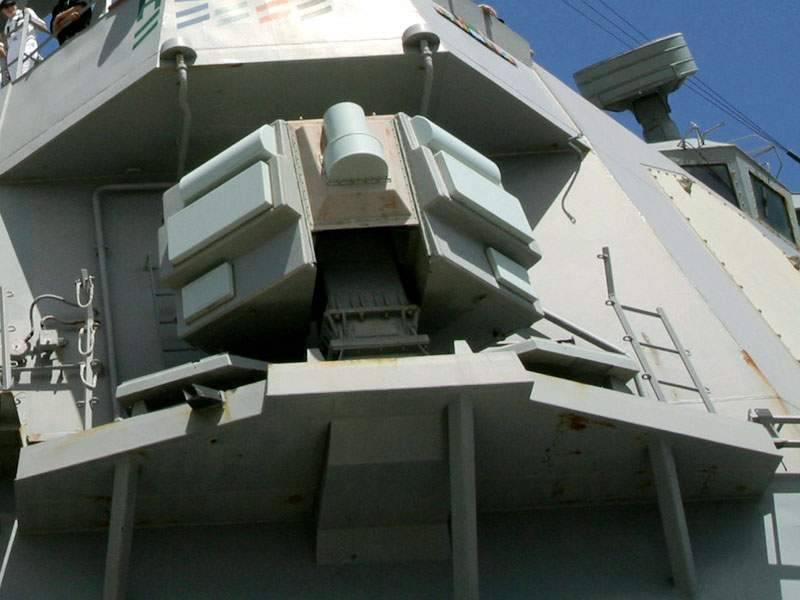 The AN / SLQ-32 (V) 6 has a 360-degree range and can operate over a very wide frequency band. The system is distinguished by ultra-fast response, instant coverage of the azimuth, in fact, almost 100% probability of intercepting a signal from a target and, importantly, simultaneous detection and tracking of several targets with assignment of a degree of importance to them.

The system can detect and classify radars of aircraft, coastal systems, various search radars long before they detect a ship precisely due to its passive part.

The active jamming station is “sharpened” for work on radar homing heads of anti-ship missiles and onboard radars of their carriers, the operating frequency range is from 8 to 20 GHz. The system can simultaneously track up to 80 targets and set barrage interference in four ranges. For this, 4 antennas with a phased array are used, capable of operating in a sector of 90 degrees each and in an independent mode in frequency.

The station is able to provide maximum jamming efficiency due to the precise definition of the target type, the so-called jamming optimization.

In addition, AN / SLQ (V) 6 operates in the mode of creating decoys, masking and diverting in range and angle of interference. There is an automatic and semi-automatic mode for setting active barrage.

The interference power can be up to 1 MW.

The AN / SLQ-32 (V) 6 includes an online library of emitter types for quick identification, with which the system communicates via satellite Internet from almost anywhere in the world.

The latest development of “Raytheon” and “Lockheed Martin” should further improve the attacking capabilities of the system in the Block 3 modification, specifically in terms of the destruction of anti-ship missiles with electronic means.

The destroyers also saw elements of the AN / SLQ-62 TEWM-STF (Transportable Electronic Warfare Module-Speed ​​To Fleet) system, another new electronic warfare system, which according to some sources has been in service with the US Navy since 2015. 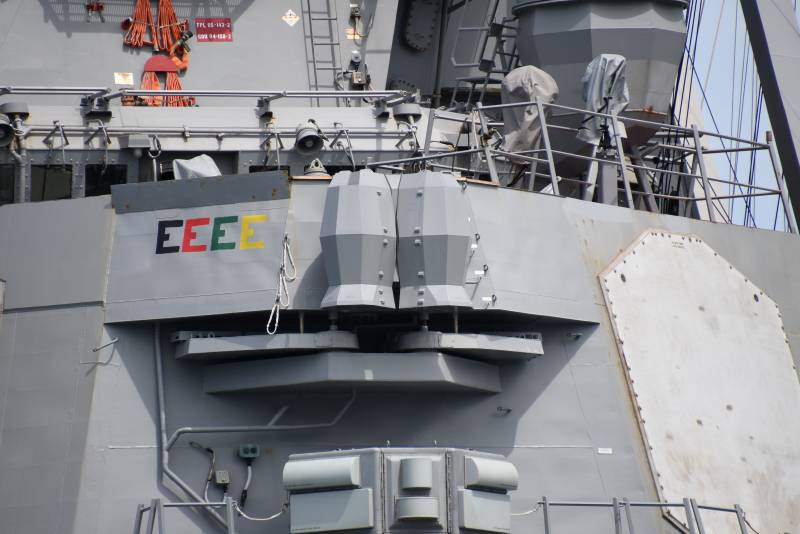 This system is also designed to work on anti-ship missiles of the SS-N-26 “Strobile” type, this is how our P-800 “Onyx” is called according to NATO classification.

In general, the Americans pay a lot of attention to Onyx and other anti-ship missiles. There is why, of course. 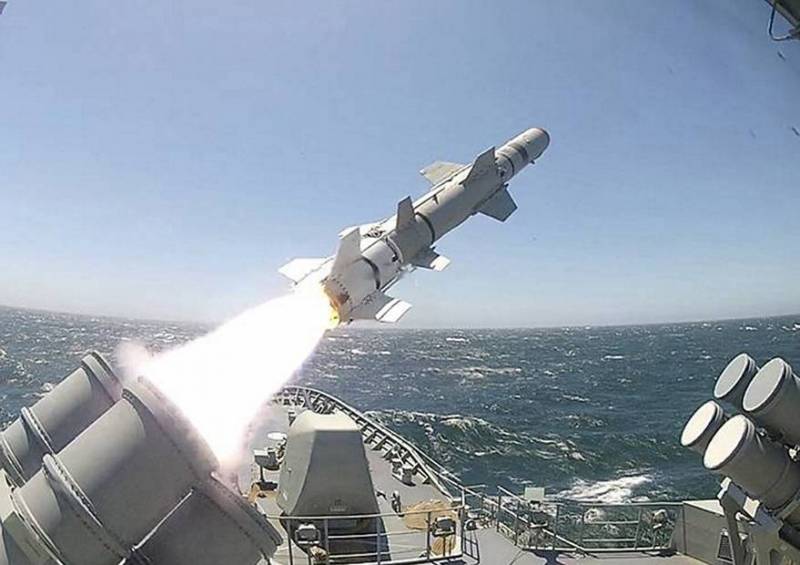 Here and the launch of active decoys of electronic warfare “Nulka” and passive decoys Mk59 and, of course, AN / SLQ-62. This does not mean that the AN / SLQ-62 complex is used exclusively to neutralize Russian anti-ship missiles, this is just one of the likely uses.

By the way, interest is also attracted by Yakhonts, which are an export version of Onyx and which Russia supplied to Syria at one time. Given that Syria is on its way to the Black Sea, the crews of American ships should take into account the presence of these missiles on their way in case of complications in the international situation.

So, we have four destroyers with an original modification aimed at fighting anti-ship missiles, and even in close proximity to the Black Sea. 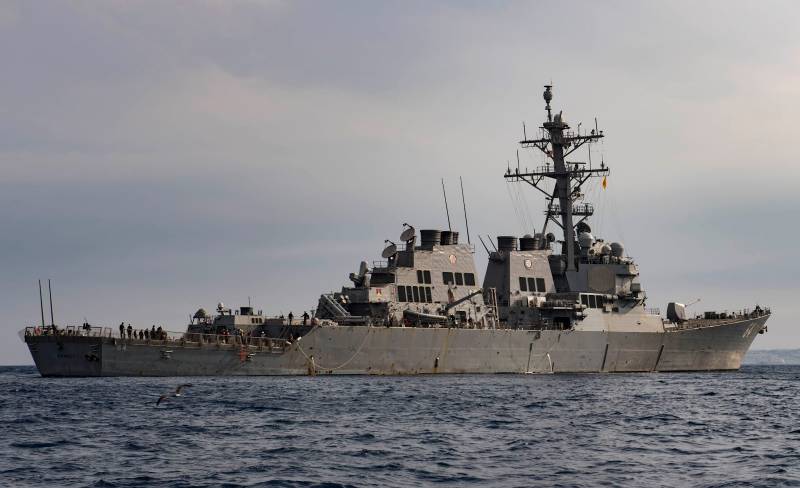 Now the visits of American destroyers from Roth to the Black Sea are not at all surprising. This is more than logical, because where else you can completely free of charge, that is, for nothing, calibrate your electronic systems and test them, so to speak, in conditions close to combat.

After all, it is quite natural that all movements in the Black Sea will take place under the sight of Russian radars, including the newest Ball systems, which are of certain interest to NATO countries.

So the US destroyers enter the Black Sea with very specific goals, primarily practicing the work of their electronic posts and combat crews precisely when they are near the Russian coast. 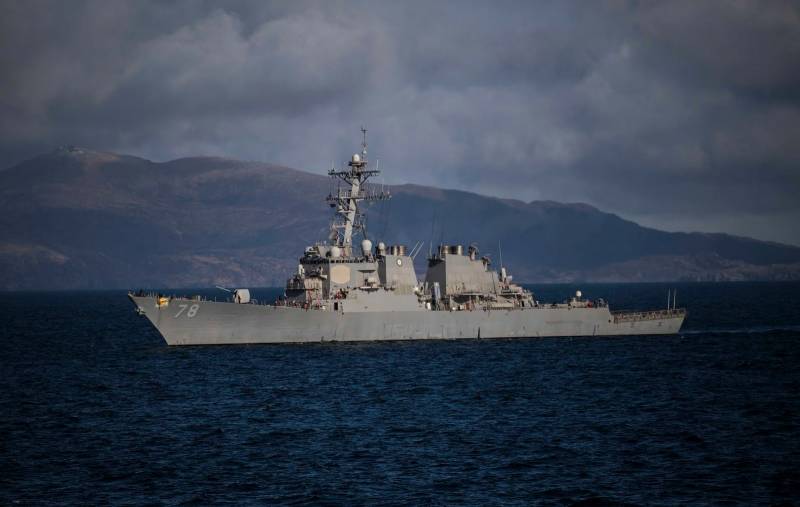 Unfortunately, this cannot be called a positive moment, but its essence is precisely this. Unfortunately, we are not able to carry out such operations near American shores, our fleet is not capable of such.

Americans are taking the opportunity to teach their calculations, calibrate their systems, and saturate their electronic libraries. It remains for us to respond in the same way to the best of our ability and ability.

In general, it is absolutely in the power for Russia to create an anti-ship zone out of the entire Black Sea coast. “Balls”, “Bastions”, air-launched anti-ship missiles, “Calibers” – all this can turn the Black Sea into a zone of absolute inaccessibility even without the presence of large ships in it. A small rocket ship will be just as effective as a rocket cruiser. Maybe even more.

And here, of course, in order to solve some of their tasks in the Mediterranean and Black Seas, American destroyers simply must be protected to the maximum. Another question is how effective this protection can be.

I think I will not surprise anyone with the conclusion that the modernization of 2017, carried out on four Arleigh Burks, will sooner or later, but will be continued and AN / SLQ-62 will appear on other American warships.

The Americans have high hopes for the complex, and it is not yet entirely clear whether SEWIP Block III with its active jamming technology will replace AN / SLQ-62, or the systems will exist in parallel on different ships, configuring the same destroyers for different tasks.

These are all elements of a strategy based on huge investments in electronic weapons. And whoever invests in the development of electronic systems today can definitely get an undeniable advantage tomorrow.

Today, American destroyers based in Rota, thanks to AN / SLQ-62, can be considered the most protected ships in the American fleet. Appetite is known to come with eating. If semi-combat tests in the Black Sea are successful, then it is quite possible that these electronic systems will appear on other ships of the American fleet.