The developer of the armored vehicle BRDM-2M “Bekas” is Alexey Butrimov, the founder of the Moscow region firm LLC “B-Arms”. The Federal Service for Intellectual Property issued a patent for a similar method of modernizing an armored car less than a year ago, in November 2019.

“B-Arms” is quite closely engaged in military equipment: judging by the official website of the company, there is even a T-72 modernization program in its portfolio. The buyers of such equipment are third world countries that are incapable of purchasing expensive and modern armored vehicles. Thus, four years ago, B-Arms prepared several dozen modernized reconnaissance armored vehicles for Laos, Kyrgyzstan and Serbia. In particular, 30 BRDM-2SM “Strizh” vehicles, which the Serbs equipped to serve in reconnaissance companies of tank subunits, went to Belgrade free of charge. The recipe for modernizing a well-deserved armored car (production ended in 1989) is quite simple: replacing an outdated power plant, minor internal alterations, and local strengthening of the reservation. 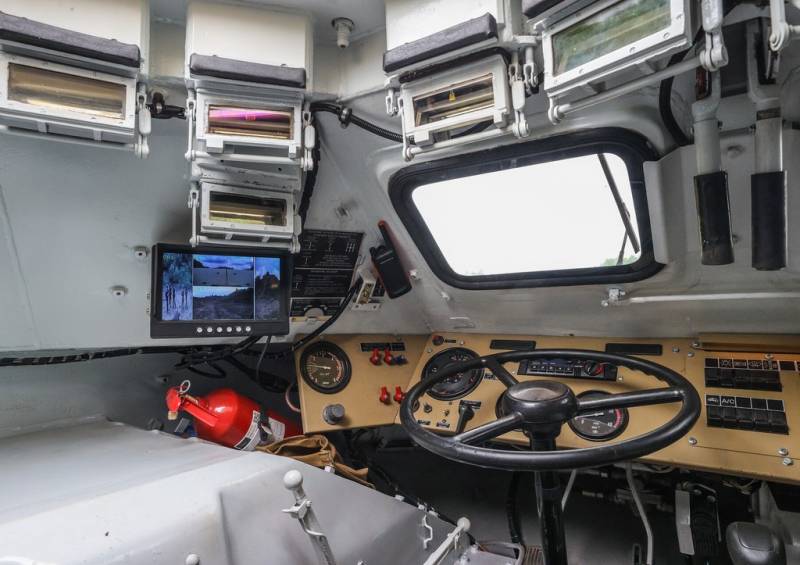 The driver’s workplace has not fundamentally changed. Source: bmpd.livejournal.com

The B-Arms did not dare to change the power structure of the armored hull. All the numerous users of the second series of BRDM were not satisfied with the archaic for the 21st century embarkation and disembarkation of the crew due to the small number and size of hatches, as well as the low level of ventilation of the engine compartment. Among the minuses are also manual control of the armored turret, a low level of visibility, a small volume of the habitable compartment and an uneven car bottom, which seriously complicates the placement of the crew. That is why both in the “Strizh” and the more modern “Bekas” they removed the additional wheels located in the base, thereby freeing up space for the landing. The jet propulsion unit was scrapped, but the BRDM-2 did not lose its ability to swim. Behind the arches, a hydrodynamic unit (guide flaps) is mounted, made “with the possibility of supplying a motor impulse to the car from the rotation of the wheels when the car is in the water.” That is, in other words, the BRDM-2SM / MB will float due to the rotation of the wheels. This, of course, will seriously reduce the capabilities of the car afloat (speed no more than 2 km / h), but for potential customers this was not a priority. It is expected that most of the buyers will be from countries with hot climates – this is clearly hinted at by the sandy camouflage of the first Bekas. 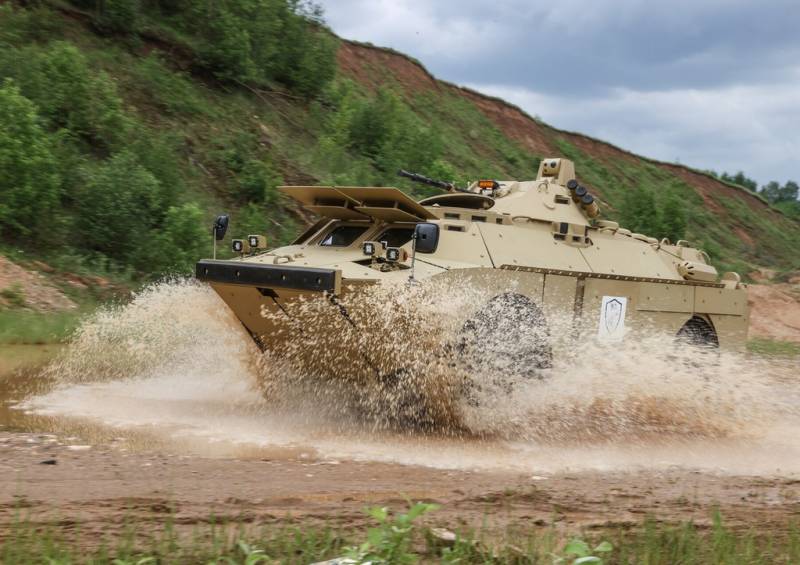 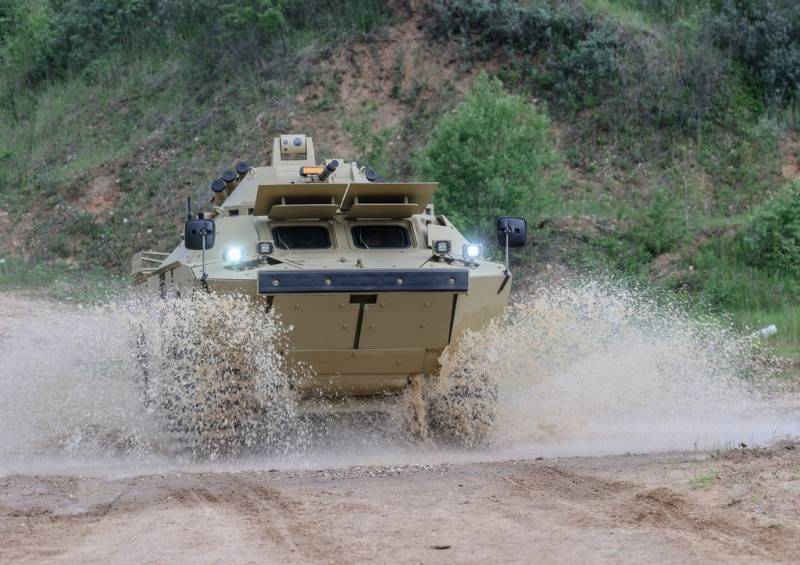 Spectacular footage in a puddle. The BRDM-2 is now swimming badly – the water cannons were taken to the B-Arms. Source: bmpd.livejournal.com

Removing the insides of the car, arches of additional wheels and a water cannon, made it possible to free up more space, which was taken up for additional ammunition and space for the landing. In the sides appeared hatches for entry / exit, equipped with liquid crystal screens. The images are displayed on them from cameras mounted in special enclosures outside. Such is the modern reading of the technology of sixty years ago.

The troop compartment and its simple interior decoration. Source: ru.motor1.com

In total, the BRDM-2MB accommodates five people: 3 crew members and 2 paratroopers. The developers are seriously talking about strengthening the mine protection of a light armored car. In particular, the authors redesigned the floor of the car, mounted additional protection outside, and covered the backs of the driver and commander with vertical sheets of armor. The engineers also took care of the explosion-proof seats for the crew and landing, but not enough. On the one hand, they are attached through a shock-absorbing system to the ceiling and wall, and on the other, they do not protect the fighter’s legs. Ideally, special footrests should be installed here, which generally isolate the feet from contact with the floor. This allows, in the event of a mine being detonated under the car, to protect the ankle from a fatal blow. However, all these tricks in terms of protection against IEDs are like a dead poultice: the BRDM is planted very low, its bottom is flat, its mass does not exceed 7.5 tons, and the crew with the landing party are located a few tens of centimeters from the ground. In addition, judging by the photographs of the “Bekas”, the side hatches do not have crossbar locks and are unable to protect the soldiers from excessive pressure leakage in the event of a nearby land mine exploding. At the moment, there is no information about the amount of explosives that the Bekas can withstand. Most likely, in order not to be disappointed, the developers did not conduct tests to detonate the BRDM-2MB.

Not to the Russian army

Depending on the wishes of the customer, the BRDM tower can be made fully remotely controlled, for which a hole is cut in the armor for mounting the aiming system. The turret installation, by the way, is borrowed from the BTR-80 and carries a 14.5 mm KPVT machine gun. From the family of Arzamas armored personnel carriers “Bekas” also received Ki-126 wheels – this, according to the authors of the project, will simplify the interchangeability of units of combat vehicles.

Now about the armor. To enhance the protection of the BRDM-2, the developers used the time-tested spaced booking. In the case of a light armored vehicle, this is actually the only way to defend without a significant increase in the mass of the armor. On average, the entire set of mounted armor can pull 800 kilograms. According to the developers, the Bekas’s forehead can withstand a burst from KPVT from 300 meters, but, obviously, until at least one sheet of additional armor is ripped off the mountings. The sides must resist 7.62 mm and 12.7 mm calibers. But here, too, the authors saved money. Why is there no splinter lining on the car? Or are B-Arms confident that high-hardness armor will not emit a fragmentation field inside the vehicle? In general, the flaw is obvious, future customers should consider this option when contacting craftsmen near Moscow.

The GAZ-41 carburetor power plant was replaced with a YaMZ-534 136 hp diesel engine. with. Power ended up dropping four horsepower, but torque was expected to rise. A characteristic feature of the modernized BRDM-2 is a removable locker at the stern, which plays the role of both additional protection for the engine and a container for transporting equipment. Depending on the version, the specific power of the BRDM-2MB varies from 18 to 20 liters. with. per ton. For comparison: for armored vehicles of the “Tiger” family, this parameter only starts from 26 hp. with. per ton. At the same time, the “Tiger” is also much better protected, although it is deprived of a rather ambiguous ability to swim. As can be seen from the above, there were no major breakthroughs with the Bekas’s mobility, although the mileage at one filling increased to an impressive 1000-1500 kilometers. 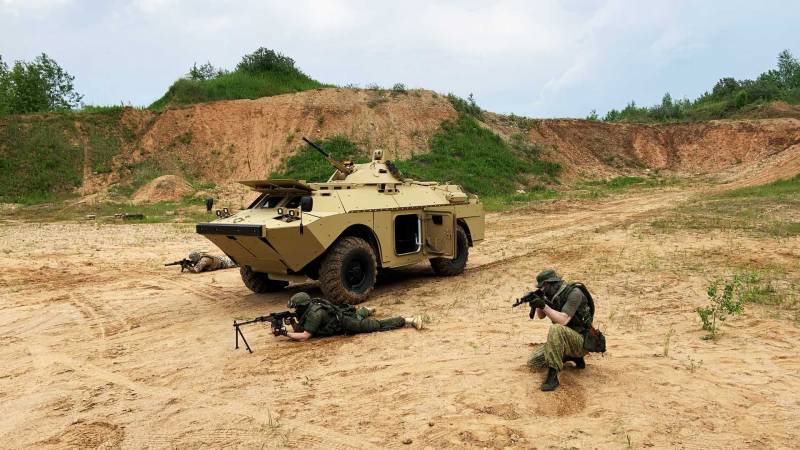 The story with “Bekas” in the media is presented as a successful upgrade to modern requirements for combat vehicles. This, of course, is not the case. It is enough to compare it with the similar but lighter amphibious armored vehicle Strela from Arzamas to understand which dinosaur they tried to restore in B-Arms. Although the BRDM-2MB “Bekas” still has a plus, it has nothing to do with combat effectiveness. Now BRDM-2 is scattered across more than forty armies of the world with a circulation of many thousands. All this armada requires modernization, and B-Arms specialists may well take on a part of such orders. And this is foreign exchange earnings, additional jobs and a high added value of the final product.

In the appendix to the Russian army, I really want to hope that the Ministry of Defense will not be interested in such crafts and in the very near future all BRDM-2 vehicles will be withdrawn from the state. And let those who cannot provide their soldiers with decent protection should use “Snipes”.