The development of a promising Polish-made BMP, which should replace the morally and physically obsolete BMP-1 (and licensed BWP-1), inherited by the Polish army from the USSR, has continued in Poland since the mid-2010s. The problem of updating the existing fleet of tracked infantry fighting vehicles is quite acute in Poland. Designed back in the 1960s, Soviet BMP-1s do not meet the requirements of the 21st century and cannot cope with new threats on the battlefield. The situation can only be rectified by the start of serial production of the modern Borsuk infantry fighting vehicle, which at the end of September 2020 completed the next stage of testing, including tests with live firing.

The new Polish tracked infantry fighting vehicle is being created as part of the modernization program for the armored and mechanized forces of Poland. It is important to understand that the fleet of armored combat vehicles of the Polish army is significantly outdated and this is not just about the obsolescence of equipment, but also about banal physical wear and tear. The infantry fighting vehicles used by the Polish Armed Forces have been around for decades.

After the liquidation of the organization of the Warsaw Pact countries, the Polish army had about 1.3 thousand infantry fighting vehicles still of Soviet design. We are talking about the BMP-1 vehicles and the Polish licensed version of the BWP-1. Then their number was reduced to several hundred, but they still form the basis of the fleet of infantry fighting vehicles of Polish mechanized formations. In the mid-1990s, Poland successfully sold its BMP-2 BMP-2 to Angola.

The development of a new BMP in Poland began in 2013, it was then that the Polish Ministry of Defense initiated a program for the development of a new floating infantry fighting vehicle (NBPWP). In 2014, funding for the program was received in the amount of PLN 75 million (approximately $ 21 million). The NBPWP project, codenamed Borsuk, is a full-fledged successor to the BWP-1. The largest Polish arms companies are involved in its creation. The first prototype of the new amphibious infantry fighting vehicle was presented at the exhibition in Kielce in 2017. 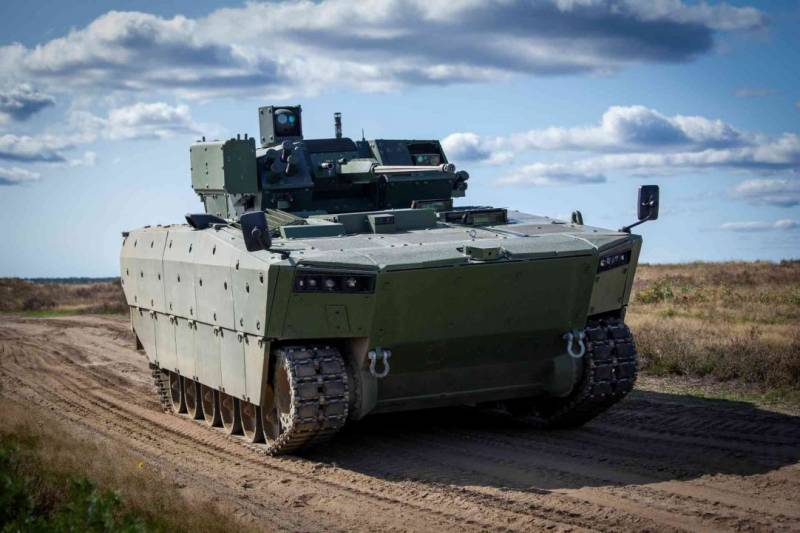 A defense plant and the largest Polish manufacturer of military equipment, Huta Stalowa Wola, are responsible for the direct development of a new tracked infantry fighting vehicle. The company was founded back in 1938 and today produces a wide variety of military products: from 120-mm self-propelled mortars and 155-mm self-propelled guns to MLRS and military engineering equipment. Huta Stalowa Wola (HSW) is part of the largest Polish state defense holding Polska Grupa Zbrojeniowa SA (PGZ Group).

In addition to Huta Stalowa Wola and the PGZ Group, the WB Electronics group of companies, one of the largest high-tech companies in Poland, specializing in the development of advanced technological solutions in the defense and civil sectors of the economy, is participating in the implementation of the project of the new Barsuk tracked infantry fighting vehicle. Among other things, the company is engaged in the development of drones, weapon control systems and guided weapon stations. In the Borsuk project, WB Electronics is working with HSW on the ZSSW-30 remote controlled tower and is responsible for its integration.

For PGZ and the Polish military, the new BMP is one of the most anticipated projects. Polish designers expect the production and development potential of Borsuk to be at least 30 years. In case of successful implementation of the project, the Polish defense holding will be able to approach the world’s leading manufacturers of tracked infantry fighting vehicles and compete with them on the international arms market. True, the project is not progressing as fast as the Polish developers would like. 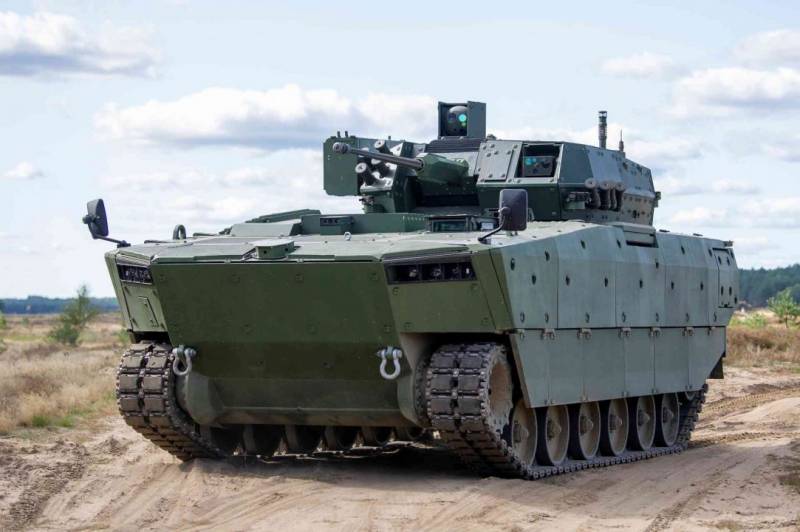 In September 2020, a new BMP with a remotely controlled weapon station was field tested. Among other things, live firing was carried out in the field conditions. The test results are not disclosed at this time, and a test evaluation process is underway. HSW President Bartlomej Zajonts noted only that the tests were completed positively. Without disclosing the results of the shooting, he noted that the company was completely satisfied with the first results of work. There is no need for major adjustments to the project.

If everything goes as planned, then the second prototype of the combat vehicle will be manufactured and will begin military tests in 2021. If the military tests are completed successfully, then the serial production of “Barsukov” can begin in 2023-2024, said Mr. Zayonts. At the same time, the high cost of new BMPs can become a serious problem for the Polish military-industrial complex and the army. Polish media estimate the starting cost of the new infantry fighting vehicle at 25 million zlotys (approximately $ 6.45 million).

Technical features of the BMP “Barsuk”

A distinctive feature of the BMP “Badger” is that the car is made floating. Many modern tracked infantry fighting vehicles have lost this ability. In their NBPWP project, Polish designers want to preserve amphibious properties, while at the same time providing the crew and the landing party with a high level of ballistic and mine protection and high fire support capabilities for motorized rifle units.

BMP Borsuk has a classic layout for all similar modern vehicles with a front engine compartment. The driver’s seat is on the left, and the diesel engine is on the right. Behind the MTO and the place of the mechanic drive are the workplaces of the commander and gunner of an infantry fighting vehicle. This is followed by an uninhabited tower, and in the aft part of the hull there is an airborne compartment for 6 people. Thus, the BMP is able to carry up to 9 people (three crew members and six paratroopers in full combat gear). 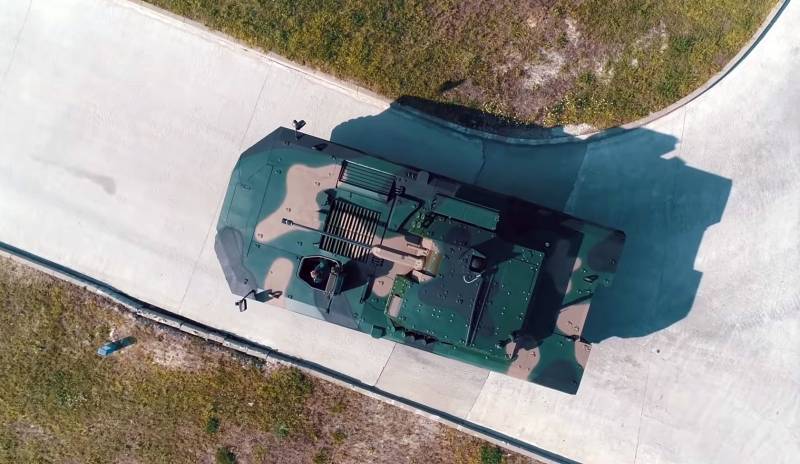 It is assumed that the floating version of the car with a standard booking level. Its combat weight will be 25 tons. In this case, it will optionally be possible to install additional booking. The heavily armored version of the combat vehicle will receive mounted ceramic and composite armor plates. It is assumed that in this version, the BMP will become heavier up to 30 tons and lose its buoyancy.

The heart of the new Polish BMP will be a German-made V-shaped 8-cylinder MTU 8V-199-TE20 diesel engine. The engine, which develops a maximum power of 720 hp, is also installed on the Austrian Ulan BMP and the Boxer family of wheeled tracked armored personnel carriers. In conjunction with the engine, a Perkins x300 automatic transmission will work. Polish journalists note that the issue with the power plant has not yet been fully resolved, so its composition may change. It is also known that the BMP will receive two types of tracks: steel and rubber-composite. The latter, with a lower strength, will provide the car with better smoothness and less noise when driving.

Polish developers attribute the presence of sensors of the Obra-3 laser warning system to the distinctive features of the new BMP “Badger”. Also, the combat vehicle will receive a digital communication system Fonet, a battlefield management system BMS and a licensed American satellite navigation receiver TALIN 5000.

The highlight of the project of a new floating Polish BMP is an uninhabited combat module, designated ZSSW-30. The remote-controlled turret weapon station was developed by HSW specialists in cooperation with WB Electronics. This is the first fully Polish project to create an uninhabited tower. In addition to the new tracked infantry fighting vehicles, this remotely controlled weapon station is planned to be installed on Rosomak wheeled armored personnel carriers. The combat module will receive a Polish fire control system capable of operating around the clock. The system will include the PCO GOD-1 Iris commander’s panoramic sight and the PCO GOC-1 Nike gunner’s sight. 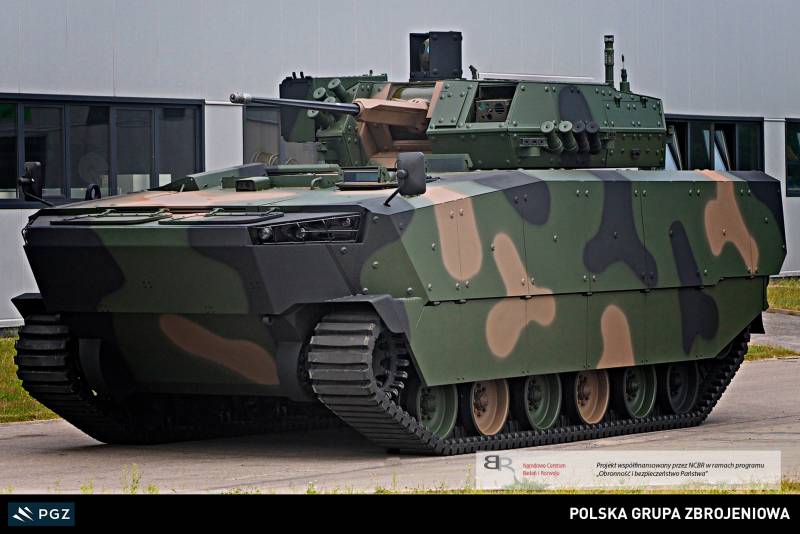 As noted by Polish journalists, it is an uninhabited combat module that can make up to half the cost of a new BMP. The fully automated uninhabited turret is armed with an American 30 mm Orbital ATK Mk 44S Bushmaster II cannon and a 7.62 mm UKM-2000 C machine gun paired with it. A distinctive feature of this gun is the possibility of its conversion into a 40 mm version for 40×180 mm ammunition.

The 30-mm automatic cannon Mk 44S Bushmaster II is a fairly effective weapon that has become widespread in the world in recent years. The gun uses a wide range of 30×173 mm ammunition for firing, the same as used with the 7-barrel GAU-8 Avenger cannon of the American A-10 Thunderbolt II attack aircraft. The gun ammunition contains armor-piercing incendiary, high-explosive fragmentation and armor-piercing feathered subcaliber projectiles. The effective range of the gun is 3000 meters, the rate of fire is up to 200 rounds per minute.

To combat heavily armored targets, it is planned to place two Spike ATGMs on the turret. We are talking about the Israeli Spike ATGM developed by the Rafael company, which was actively purchased by Poland and is produced under license by the Polish defense company Mesko. These anti-tank missiles are equipped with a television / thermal imaging seeker and are able to hit targets at a distance of up to 4, 5.5 or 8 km, depending on the modification. The armor penetration declared by the manufacturer is 850-900 mm.