In France, the process of creating and bringing to mind a new light armored car, designed to carry four people, continues. Arquus is working on the creation of a car with a hybrid power plant.

The feature of the armored vehicle, in addition to the power plant, is the ability to move sideways, like a crab, since the wheels of the front and rear axles are steerable.

For the first time, the new armored car Arquus Scarabee was presented to the general public in 2019 as part of the International Aviation and Space Salon in Le Bourget. The airborne armored car came to the court at the Paris Air Show 2019. It is known that a small group of specialists from the Arquus company, collaborating with small and medium-sized French enterprises and start-ups, was responsible for the development of the armored vehicle. The developers are especially proud that 95 percent of the project’s suppliers are from France.

Arquus is the new reincarnation of the renowned Renault Trucks Defense, which was responsible for supplying 90 percent of all wheeled vehicles to the French army. It is reported that a number of foreign customers are already showing interest in the Scarabee armored vehicle. This is easy to believe when you consider that Arquus already has about six dozen export clients in its portfolio.

Arquus Scarabee is a lightweight 4×4 armored vehicle. The capabilities of the armored car allow it to be used for reconnaissance on the front line in direct fire contact with the enemy, and in the rear areas.

The armored car is easily transported by air by the most common military transport aircraft of the NATO bloc, primarily by the numerous “Hercules”. Transfer by transport helicopters is also possible. For example, with the help of a Chinook helicopter. It is also possible to drop an armored vehicle on a special cargo platform LTCO12. In this case, the vehicle will be ready for battle 15 minutes after landing. 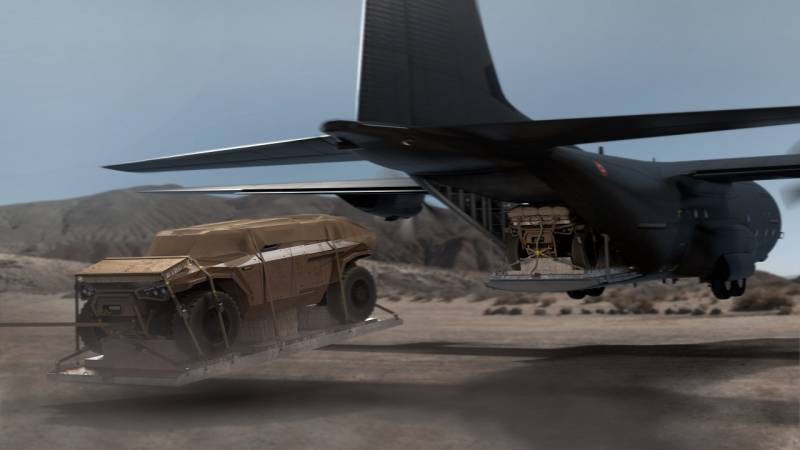 An important feature of the armored vehicle is the presence of steering wheels of the front and rear axles, as well as a fully independent suspension.

The armored car is able to move almost sideways, without exposing the enemy to the most vulnerable sides and stern. In this way, it resembles a crab and has already caused many comparisons with this crustacean in the foreign press.

This solution opens up new tactical opportunities, increasing maneuverability and mobility, especially in urban combat or in spaces cluttered with equipment and various obstacles.

Another feature of the armored car is the variable ground clearance. There are two options available to the driver: high for off-road driving, and low for driving on good roads. It can also be used for ease of transportation by air and to reduce the height of the combat vehicle.

Arquus calls its development the first hybrid military vehicle. In this regard, Scarabee can indeed change the standards for this class of military equipment over time. Operation only from the electric motor makes the machine as quiet as possible and reduces the thermal signature, which is especially important for operations at night. 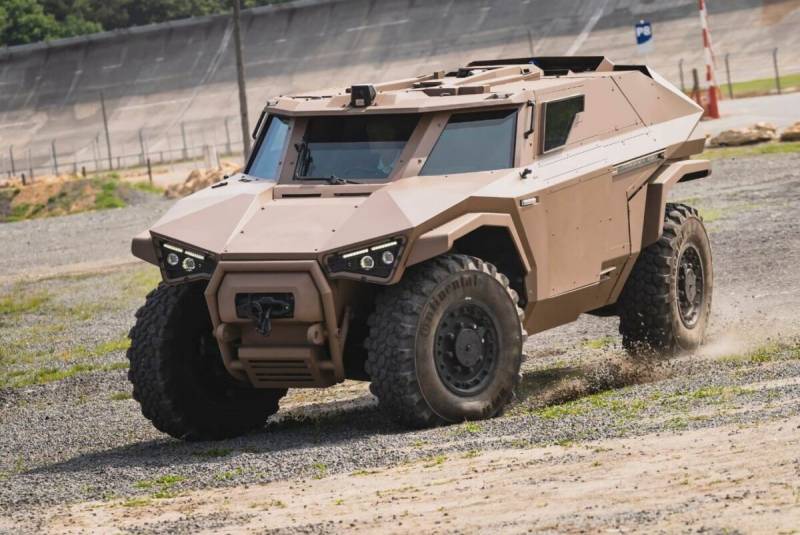 The manufacturer claims a high level of ballistic and mine protection, without disclosing details. Based on the mass of a combat vehicle of 8 tons and a crew of only four, one can imagine that the level of protection of the “Scarab” is really high.

The internal layout of the armored vehicle was designed to facilitate crew collaboration and maintenance. At the same time, the driver’s seat was placed in the front center, providing him with a forward view of 270 degrees.

The manufacturer declared the following technical characteristics of the armored car: gross vehicle weight – 8 tons. Capacity – 4 fighters, including the vehicle driver. The ground clearance is 0.385 meters. The maximum length of the armored car is 5.25 meters, width – 2.1 meters, height – 2 meters. In this regard, the model is slightly inferior in length to the Russian armored car “Tiger” (5.67 meters), significantly exceeding in weight.

The 8-ton machine is powered by a 300 hp V6 VMM diesel engine. from. Since the power plant of the armored vehicle is hybrid, the diesel engine is paired with an electric motor with a power of 70 kW (approximately 100 hp). The power plant of the armored vehicle works in conjunction with an 8-speed automatic gearbox. The suspension of the machine is completely independent with the ability to change the value of the ground clearance. Used tires – 365/80 R20.

Unfortunately, the speed characteristics of the model are not disclosed. Nothing is known about the power reserve either. At the same time, the hybrid installation of the armored vehicle assumes the possibility of various modes of operation. Including completely on an electric motor, which is especially important for reconnaissance missions. 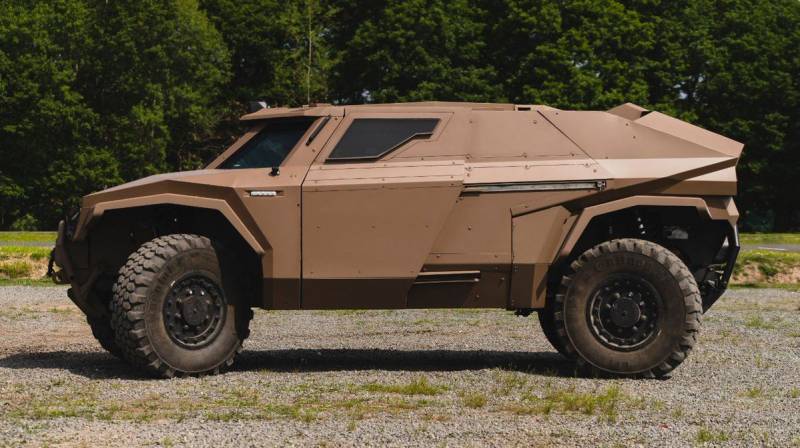 In an interview with the French media, the developers of the Scarabee armored car noted that the power of a 70 kW electric motor is enough to provide an 8-ton car with 10 kilometers of cross-country travel at a speed of 15 km / h until the batteries are completely discharged.

The armored car has good cross-country performance. The machine is able to overcome a ford with a depth of 0.8 meters without any preliminary preparation.

Also, the armored car can overcome vertical walls and obstacles up to 0.4 meters high. And trenches up to 0.9 meters wide. A steep uphill climb will not be a problem for the car, the Arquus Scarabee is able to climb a hill with a steep incline of 60 percent.

At the same time, the manufacturer declared the lateral stability of the armored vehicle on slopes with a steepness of up to 40 percent. The machine achieves such results due to its low center of gravity. It should be noted that this is true for armored vehicles without additional equipment or combat modules installed, which will certainly change the center of the vehicle.

The Arquus Scarabee armored car belongs to the class of light and well-protected armored vehicles that meet the concept of the activity of many modern armies.

The armored car is designed to support the actions of small, highly mobile detachments. The model is air-transportable and can be airlifted not only by military transport aircraft (Lockheed C-130 Hercules or European Airbus A400M), but also by helicopters. For example, a heavy transport helicopter Boeing CH-47 Chinook. 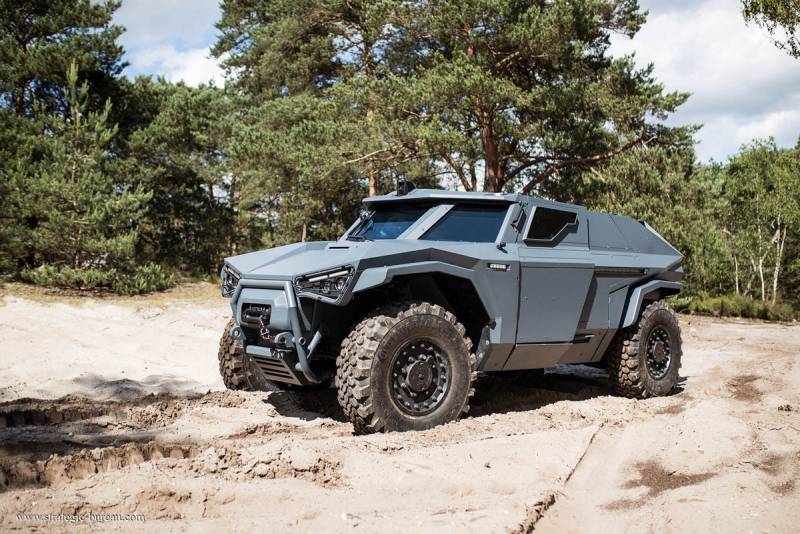 The set of features and characteristics inherent in the design of the armored car dictates the possibilities of using the vehicle on the battlefield.

The Scarab features exceptional mobility, allowing the machine to be used with equal efficiency on various types of terrain, including dense urban areas and confined spaces.

The presence of a hybrid engine makes the armored car one of the first combat vehicles (if not the first), which is capable of running 100 percent on electricity. This opportunity will appeal not only to Greta Thunberg, but also to the military, who, depending on the situation, will be able to switch to an electric drive. The presence of this option allows you to reduce the acoustic and thermal signature of the armored vehicle. As a result, the Arquus Scarabee armored vehicle can be used for reconnaissance missions.

In addition, the armored vehicle is able to solve airborne assault tasks, being a means of transportation for a small well-armed and equipped detachment. The armored car and its crew are able to capture forward positions or important objects on the ground. Take the runways, for example. Also, the car can be used for patrolling and controlling the territory, escorting convoys and protecting communications.

At the same time, the armored car is equally suitable for reconnaissance in force, and for “quiet” operations for the imperceptible observation of the enemy grouping.

In the future, the car will clearly receive various equipment options. From radars and various electro-optical sensors to remotely controlled combat modules with a different set of weapons: from large-caliber machine guns and automatic grenade launchers to rapid-fire small-caliber cannons, including 30-mm ones.