By the end of 1944, Germany’s defeat in World War II was no longer in doubt. At the same time, the leadership of the Third Reich tried to postpone this day as much as possible. One of the last attempts to delay the end of the war was the organization of the Volkssturm militia units. In total, the German command planned to create 6,710 battalions of the people’s militia. In fact, until May 1945, it was possible to form about 700 Volkssturm battalions.

The Volkssturm was formed by the personal order of Adolf Hitler on the basis of an order dated October 18, 1944 and was one of the last examples of the agony of the Third Reich. Total mobilization involved putting under arms the entire male population between the ages of 16 and 60, who were not yet in military service. In total, according to various estimates, it was planned to recruit from 6 to 8 million Volkssturmists to the service.

Arming such a mass of people was a huge problem, while Nazi Germany faced a shortage of small arms even before the formation of the first Volkssturm units. To solve the problem, it was planned as soon as possible to create and send into mass production the most simplified models of small arms. According to one of these programs, at the end of the war in Germany, a simplified version of the English Sten submachine gun was developed. 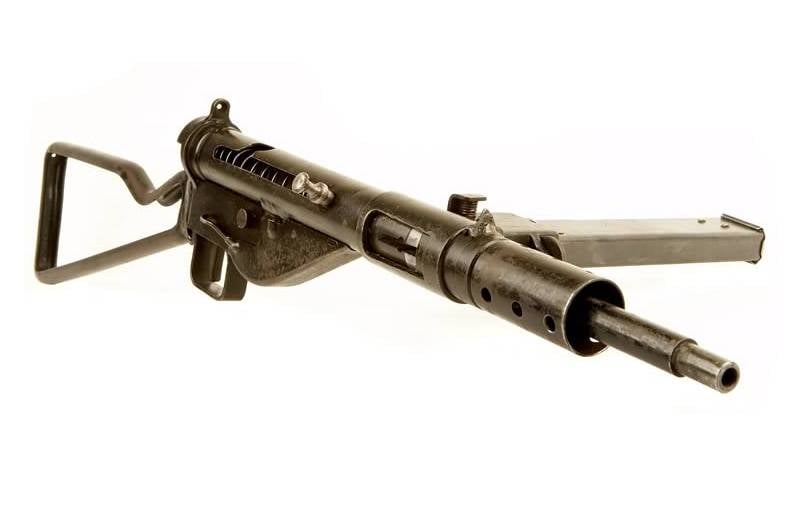 At first, the Germans underestimated this British submachine gun, considering this model of small arms a misunderstanding. However, in reality, Sten coped well with his combat duties. It is worth noting that in Great Britain it was really created not from a good life, trying to increase the number of automatic weapons in the troops after the disaster at Dunkirk. Curiously, the British themselves created Sten, simplifying the German MP-28 submachine gun to the limit. The weapon turned out to be simple, cheap in mass production and very technologically advanced. At the end of World War II, the Germans chose Sten as an alternative to the MP-40 for arming the Volkssturm, while the weapon in production was even more simplified.

One of the places where the German version of the Sten submachine gun was to be produced was the large Hamburg shipyard Blohm & Voss. It is a shipbuilding company with a rich history, founded back in April 1877. The shipyard operates in Hamburg today. For anyone interested in the history of the Navy, Blohm & Voss is not just the name of another shipbuilding company. During the First World War, 98 submarines were assembled here. During the reign of Hitler, the shipyard did not lose its military significance.

It was in Hamburg at the Blohm & Voss shipyard that the real symbols of Hitlerite Germany were created. The battleship Bismarck, the heavy cruiser Admiral Hipper and the infamous cruise liner Wilhelm Gustloff, sunk by the Soviet submariner Alexander Marinesko at the end of the war, were built here. In addition to building ships and submarines, Blohm & Voss also worked on the development of seaplanes. Here, among other things, the largest production seaplane of the Luftwaffe, the six-engine Blohm & Voss BV.222 “Wiking”, was assembled. 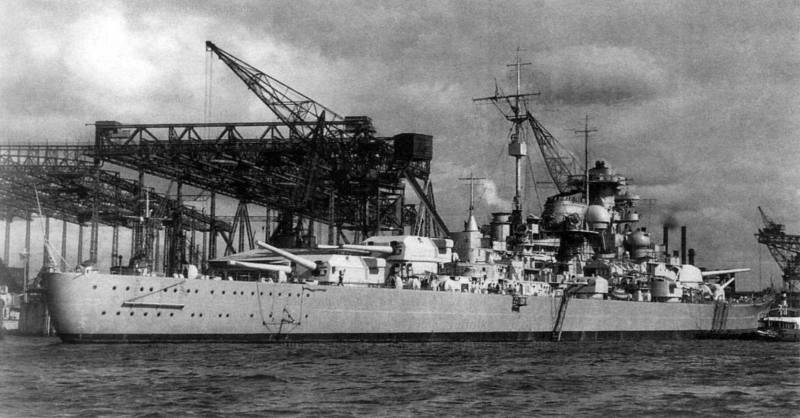 Completion of the battleship “Bismarck”

Blohm & Voss was a constant target of Allied bombing raids. The shipyard’s factories were hit by about five thousand registered bomb strikes. Despite this, the shipyard continued to work; by the end of the war, about 15 thousand employees worked here, thousands of Europeans herded for forced labor and an unknown number of prisoners of the Neuengamme concentration camp.

Any remaining production facilities at the end of the war were of great value to Germany, so they tried to expand the production of a submachine gun for the Volkssturm at the Blohm & Voss shipyard. It is known that an exact copy of the Sten submachine gun was produced in Germany for a long time, but a simplified version of the weapon was needed to arm the Volkssturmists, and not a German copy of the British model. It is known that by the end of 1944 the German industry produced at least 10 thousand submachine guns under the code designation Geraet Potsdam (“Sample Potsdam”). It was a replica of the Sten Mk.II submachine gun. In November of the same year, the weapons company Mauser presented blueprints for a new model based on the Sten, codenamed Geraet Neumuenster (“Sample Neumuenster”). Later, this model received the official designation MP 3008 in production.

In turn, a number of submachine guns were assembled at the plant in Hamburg, which were a cross between the two projects listed above. These models retained the barrel casing typical of the British “Walls” (the difference was the presence of four holes instead of three). In addition, the Hamburg walls received typical box magazine receivers with a spring-loaded retainer. In turn, this lock was intended solely to secure the barrel casing. Due to the fact that the magazine receiver was immovably welded in the lower position, it was impossible to turn it to the side, as on a British submachine gun.

An additional distinguishing feature of the Blohm & Voss models was the wooden pistol grip for better holding the weapon: it was quite practical and was located behind the trigger. Neither the British Sten submachine guns nor the simplified German MP 3008 had such a handle. In order to accommodate the handle, the Hamburg-based designers have specially lengthened the mounting plate of the T-shaped metal shoulder rest downward. Since the model was designed to conduct only automatic fire, there was no translator of the fire mode on it. This model was made with obviously unnecessary complexity at that time, so it hardly became widespread enough. It is difficult to say what series these submachine guns were made in, most likely, several hundred of these submachine guns were fired. It is believed that they were intended to be transferred to the fortified area that was being created around Hamburg, and could represent their own vision of the Sten submachine gun with a simplified non-rotating magazine receiver for standard German MP-38/40 magazines.

On the creation of an already simplified modification of the submachine gun, which received the army designation MP 3008, the engineer of the large arms company “Mauser-Werke” Ludwig Forgrimmler worked. The first thing he did was change the location of the store. The model used a standard box magazine for 32 rounds of 9×19 mm from MP-38/40 submachine guns. In contrast to the British model, the horn position is now vertical rather than horizontal.

Such a design move moved the center of gravity of the weapon to a symmetrical plane, which had a positive effect on the accuracy of shooting from the model compared to the British “Walls”. This was especially noticeable when firing bursts. True, the vertical arrangement of the store receiver had a drawback. When shooting from a prone position, this was not the most convenient location of the magazine for the shooter – in this regard, it was Sten with a movable magazine receiver and its lateral location when shooting turned out to be better. 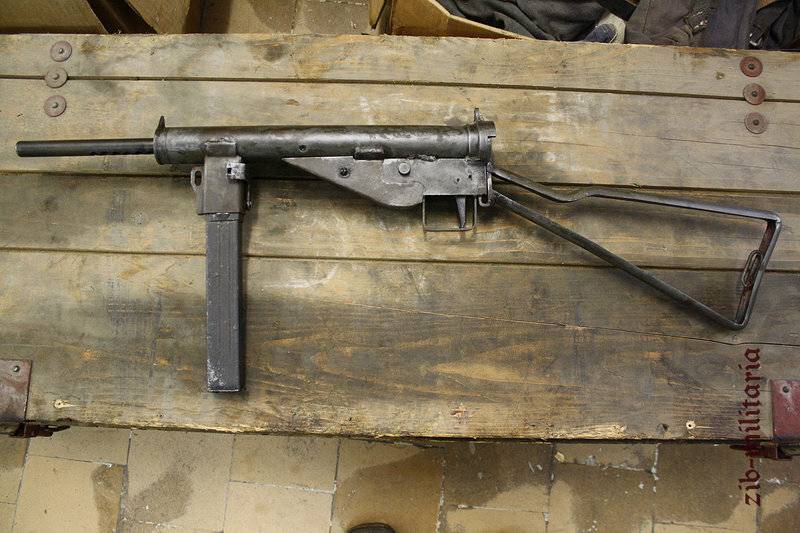 Also, the MP 3008 model differed from the British Sten submachine gun by a seriously redesigned barrel attachment. Unlike the British and his copy of the Gerat Potsdam project, the barrel on this sample was rigidly fixed in the receiver, and there was no casing at all. This further simplified and reduced the cost of the production of new automatic weapons. At the same time, the MP 3008 model (in contrast to the samples produced at the shipyard in Hamburg) retained the push-button fire translator. Position “E” – single fire, “D” – automatic. Extremely simple in both production and development, the MP 3008 submachine gun was most often equipped with the most primitive metal shoulder rest, more often a frame one, there was also a T-shaped one. Nobody paid attention to the aesthetics of appearance, as well as to the culture of production – it was good if the weapon could simply shoot.

The last statement is not even a joke. All models, the production of which was carried out in the final months of World War II, were assembled defiantly roughly, which is clearly visible in the copies of this weapon that have come down to us and the quality of the welds. They tried to launch the MP 3008 model into mass production, scattering a dozen different enterprises, including very small arms and machine-building firms throughout Germany. The submachine gun and its individual components were produced in Suhl, Berlin, Bremen, Solingen, Hamburg, Oldenburg, Lonn and other cities. Due to the serious difference in the level of technological equipment, training of workers and experience in the production of small arms, models produced in different cities could have significant deviations from the accepted uniform documentation for a submachine gun. 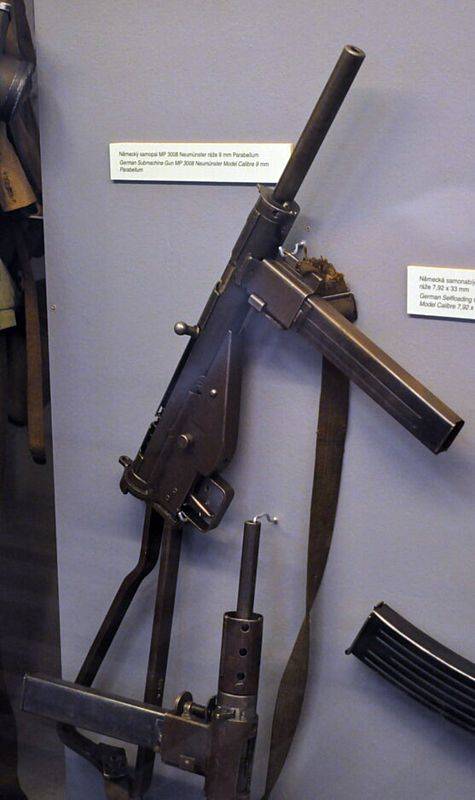 The production volumes of the MP 3008 are also not known for sure, but this model was already released in commercial quantities. Until the end of the war, a variety of German enterprises could produce several tens of thousands of such ersatz submachine guns. True, this was still not even close enough to arm all the Volkssturm units planned for formation, which often rushed into battle, even without having enough small arms.