When properly operated, a strategic bomber is only dangerous to the enemy. However, any violation of the instructions leads to risks and dangers for the flight and technical personnel. Great attention is always paid to safety issues, especially when it comes to complex and capricious equipment. For example, during the operation and maintenance of the Convair B-58A Hustler long-range bomber, American specialists had to monitor a number of factors and observe certain safety measures.

For its time, the B-58A had outstanding tactical and technical characteristics and combat capabilities. He could break through the air defense of a potential enemy, drop special ammunition on the target and safely return to base. The maximum speed exceeded 2100 km / h, the combat radius was over 4100 km, and the combat load was 8.8 tons in a special container.

High performance was ensured by the use of a number of modern technologies and on-board equipment of the latest types. So, four General Electric J79-GE-5A turbojet engines with a maximum thrust of 4536 kgf and an afterburner of 7076 kgf were responsible for flight characteristics. The flight and the destruction of targets were carried out using the Sperry AN / ASQ-42 sighting and navigation complex, which included several different devices. In case of an enemy attack, there was a 20-mm automatic cannon with a radar sight.

The use of all these new products provided known advantages, but led to negative consequences. The sophisticated and expensive aircraft made special demands on the training of service personnel. In addition, some of its components could pose a risk to people and material. Therefore, to work safely with the aircraft, simple rules had to be followed. In particular, it was recommended not to get into the danger zones around the aircraft.

A number of risks and dangers of the B-58A to ground personnel were associated with its power plant. Four GE J79-GE-5A engines created several dangerous zones around the aircraft with different “damaging factors” and risks. Hitting some of them threatened, at least, with injuries. 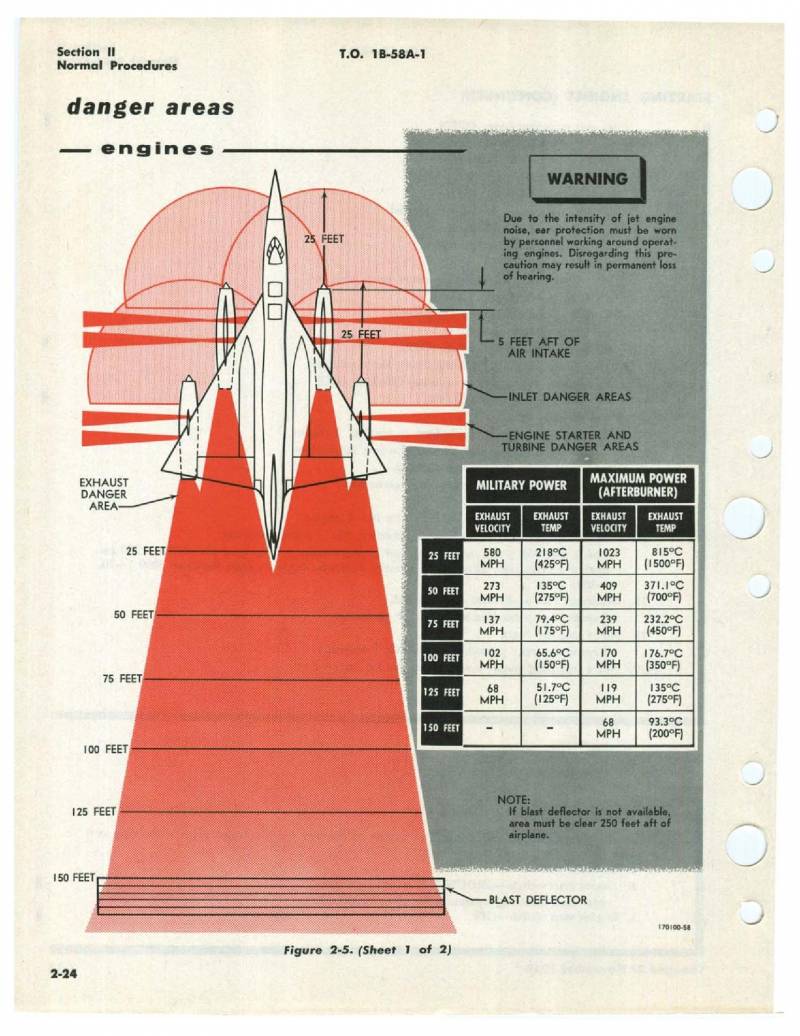 Hazardous areas around engines. Illustration from the B-58A flight manual

In nominal mode, the J79-GE-5A engine consumed 77 kg of atmospheric air per second (about 60 cubic meters). As a result, a powerful stream was formed near the air intakes, capable of picking up one or another object. For this reason, when the engines are running, it is forbidden to be in the hemisphere in front of the air intake within a radius of 25 feet (7.6 m), as well as in the area 5 feet (1.5 m) deep behind it. The arrangement of the engines was such that the danger zones of the air intakes were overlapped and combined. The general area was wider than the aircraft, and only the nose cone did not fall within its limits.

At maximum mode, the temperature in front of the turbine reached 930 ° C. At the same time, a supersonic flow of gases escaped from the nozzle. When the afterburner was turned on, the temperature and speed of the gases increased. The working engines formed a continuous danger zone 40-75 m deep behind the aircraft. In this regard, it was recommended to build gas protection shields near the parking lots.

When operating J79-GE-5A engines, especially during start-up and transition between modes, there was a non-zero risk of damage to the starter or turbine. In such an accident, the debris could fly away from the nacelle within a narrow sector. Each engine had two such annular zones.

The obvious problem was engine noise. The operating manual required the constant use of personal protective equipment. Failure to comply with this requirement threatened permanent hearing loss. However, in this respect, the B-58A was no more dangerous than other aircraft of its time.

Aiming and navigation complex AN / ASQ-42 included several systems for different purposes, some of which could be dangerous. Microwave stations threatened humans, electronic devices, and ammunition and fuel storage facilities. In this regard, additional zones around the aircraft were determined, on which certain restrictions were imposed. 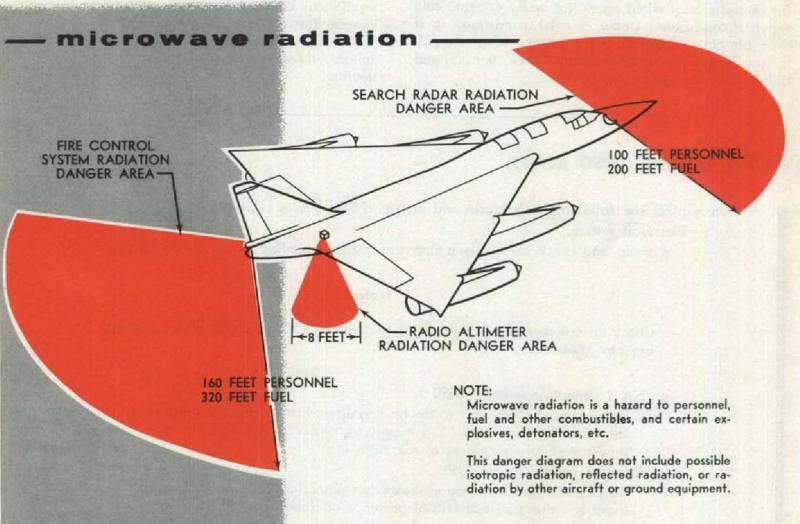 The B-58A carried several radar systems for different purposes. The AN / APN-110 Doppler navigation locator, the AN / APN-170 terrain avoidance station, the AN / APB-2 bomber sight and the MD-7 radio sight to control the gun mount were used. Some of the instruments were located in the nose of the fuselage, others – at the bottom of the tail and at the base of the keel.

When using bow radars, the front sector with a width of 180 ° was the danger zone. Operating radars were dangerous to people at a distance of 100 feet (30 m), to fuel up to 200 feet (61 m). The MD-7 radio sight had a different power, which is why a less wide sector of the rear hemisphere with a radius of 160 feet (48.6 m) was considered dangerous to humans. For the fuel, the distance was set twice. The radio tail altimeter emitted in an area in the form of a cone with a base with a diameter of 8 feet (2.4 m).

Due to its specific aerodynamics, the B-58A bomber was distinguished by high takeoff and landing speeds. When touching the lane on landing, the speed was 300-330 km / h. This led to high mechanical and thermal loads on the wheels and braking system of the main landing gear. There was a risk of fire or explosion of tires – with understandable unpleasant consequences. By the time the nose strut touched, the speed dropped, and the loads on its wheels were lower, which made them safer.

After landing and taxiing into the parking lot, the wheels of the main supports should have been closed with special screens that could withstand an explosion. In their absence, it was necessary to observe the appropriate safety measures and not approach the chassis. Side sectors 90 ° wide (45 ° forward and backward relative to the wheel axles) within a radius of 100 feet were considered dangerous. It took 30 minutes to cool the chassis, after which it became safe.

The B-58A bombers were in service with the US Air Force from 1960 to 1970. A total of 116 such aircraft were built, and during the operation they lost 26 units. The high cost of equipment, the complexity of operation and a record-breaking accident rate for its class led to a fairly rapid removal from service and replacement by other aircraft. 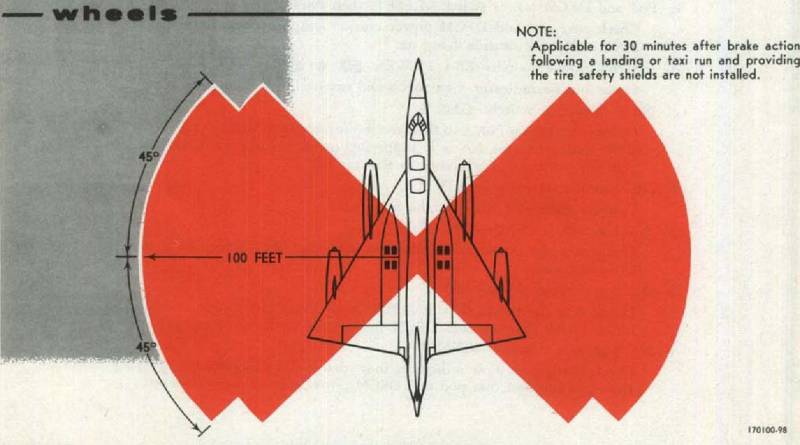 The precautions offered by the bomber designer fully paid off. Compliance with hazardous area restrictions and other measures avoided damage to equipment and infrastructure or serious injury to personnel. Abnormal situations associated with the impact of engines or avionics could be prevented.

At the same time, in practice, the importance of safety measures in relation to the chassis has been repeatedly demonstrated. Ruptures of wheels and fires of struts during landing, running or taxiing were quite frequent occurrences. They clearly showed why you should not approach the plane until the landing gear has cooled down.

However, throughout the entire operation of the B-58A, the accident rate remained quite high. Difficulty of maintenance and piloting and other factors led to various incidents. Thus, an overly complex aircraft turned out to be dangerous not only for a potential enemy, but also for its pilots or technicians. However, adherence to simple rules and recommendations made it possible to drastically reduce the danger of equipment and avoid unnecessary losses.