None of the latest local conflicts have gone without the use of aviation. The most frequently encountered aircraft over the battlefield for many years were attack aircraft. Recently, they are giving way to strike drones and kamikaze drones, but they are still used quite actively. The two most famous attack aircraft of our time remain the Russian Su-25, nicknamed the Rook and Comb, and the American A-10 Thunderbolt II, known as the Warthog. Let’s try to figure out what the advantages and disadvantages are inherent in these combat aircraft.

Attackers of the same age

Both aircraft are designed to provide direct fire support to troops on the battlefield. Work on them was carried out at about the same time. The American attack aircraft Fairchild-Republic A-10 Thunderbolt II, named after the successful WWII fighter-bomber P-47 Thunderbolt, was developed in the 1970s and was officially adopted in 1976. Serial production of machines continued until 1984, during which time 716 aircraft were assembled in the United States.

The main purpose of the A-10 Thunderbolt II attack aircraft is to combat enemy armored vehicles. The aircraft was created at a time when the United States and American NATO allies were seriously preparing to confront the threat from the armies of the Warsaw Pact countries in Europe, primarily preparing to fight numerous tank and motorized infantry units. The attack aircraft had to stop thousands of Soviet tanks on the way to the English Channel not only with missile weapons, but also with cannon armament. But more on that later.

The Soviet Su-25 attack aircraft began to be developed at the Sukhoi Design Bureau already in 1968. In 1970-71, it was the preliminary design of the Sukhoi attack aircraft that won the competition to create a new attack aircraft, beating representatives of the OKB Yakovlev, Mikoyan and Ilyushin. The draft design and model of the aircraft were ready in September 1972. The first flight took place on February 22, 1975. The overseas competitor had already flown for three years by that time, for the first time the A-10 took to the skies on May 10, 1972. State tests of the Su-25 attack aircraft were completed in December 1980, serial production of the aircraft began a year earlier at a plant in Tbilisi. The first serial attack aircraft entered the troops in April 1981, while the official adoption of the Su-25 took place only on March 31, 1987, that is, after six years of operation and active use in hostilities in Afghanistan. 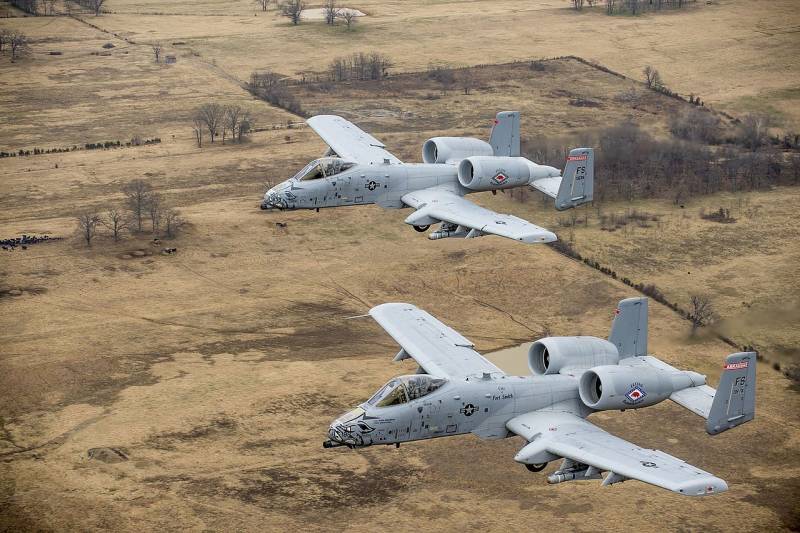 A pair of A-10 Thunderbolt II attack aircraft

The main purpose of the Su-25 attack aircraft, like its American counterpart, was the direct support of ground forces on the battlefield, including the destruction of objects with given coordinates. At the same time, the aircraft was designed for operations in a big war. It was assumed that the Su-25 would be able to conduct an offensive together with the army, regardless of airfields. It was this fact that determined the fact that the attack aircraft can be used from unpaved runways.

Both attack aircraft are subsonic armored warplanes for direct support of troops on the battlefield. The very concept of using combat vehicles assumed their use from low altitudes and at subsonic speeds. Before the appearance of the Su-25, the USSR counted on high-speed fighter-bombers: Su-17, Su-22, MiG-23BN. These machines had one engine and did not carry armor, their means of protection was high flight speed. However, the fighting in Afghanistan confirmed that such vehicles are very vulnerable to fire from the ground when performing combat missions at low altitude. The Su-25 was devoid of these shortcomings, it received a serious reservation and a power plant from two engines.

Both attack aircraft have titanium armor that protects the pilot, control system elements, and the fuel system, and the Russian attack aircraft also has armored plates from the motorcycle compartment that separate the engines. On the Su-25, the thickness of titanium armor is from 10 to 24 mm, on the American A-10 from 13 to 38 mm. In general, the weight of armor on aircraft is about the same. The American A-10 attack aircraft has 540 kg of titanium aviation armor, while the Su-25 has 595 kg of armor protection. The total mass of the means of ensuring combat survivability is estimated for the Su-25 at 1050 kg, and for the American aircraft at 1310 kg. 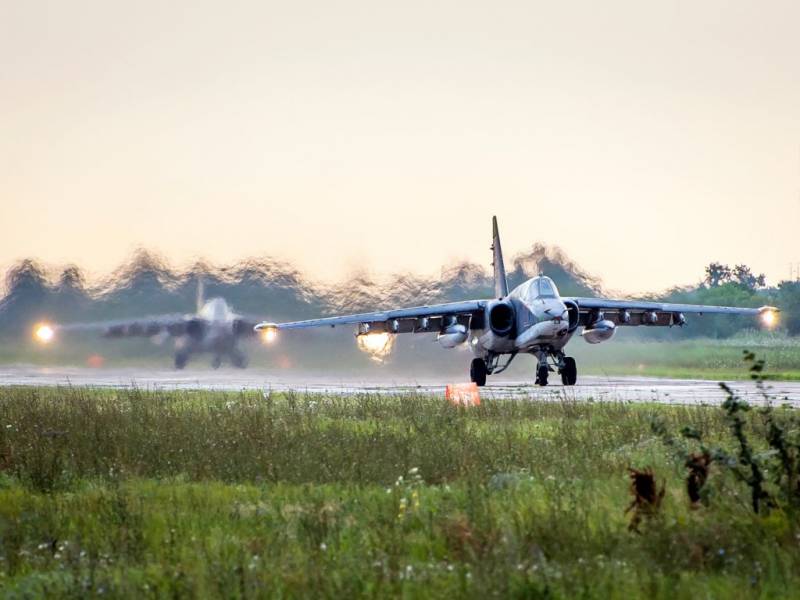 While the engines in the Su-25 attack aircraft are covered with a hull and protected from fire from the ground by armor, the A-10 Thunderbolt II engines are placed behind the fuselage and there is only air between them. The two widely spaced engines on the American attack aircraft are positioned high on either side in the rear fuselage of the aircraft. From most angles, when fired from the ground, they are shielded by structural elements of the aircraft. From the front and rear hemispheres, they are covered with wing consoles, or the tail unit of the attack aircraft. Both the one and the other scheme proved to be quite viable in combat operating conditions. Both vehicles are distinguished by increased survivability and returned to airfields after the loss of one of the engines.

The features of the American attack aircraft, aimed at increasing survivability, also include the two-fin tail of the vehicle. The choice of such a scheme was carried out as a result of studies of the combat survivability of the control system. Tests have shown that such a scheme allows serious damage on one side of the fuselage, without significant damage to the aircraft, and most importantly, without loss of control. The Su-25, on the other hand, has a classic single-fin tail unit.

In terms of speed and maneuverability, the Russian Su-25 wins by a strong margin. The Rook’s maximum flight speed is 950 km / h, cruising speed is 750 km / h. The maximum flight speed of the “Warthog” is noticeably lower – up to 720 km / h, and the cruising flight speed is only 560 km / h. At the same time, the engines on the A-10 Thunderbolt II attack aircraft are significantly more economical than on the Su-25, they provide the vehicle with a larger combat radius and a ferry range of 4150 km. The ferry range of the Su-25 with four PTB-800 suspended tanks (with drop) is limited to 1850 km. 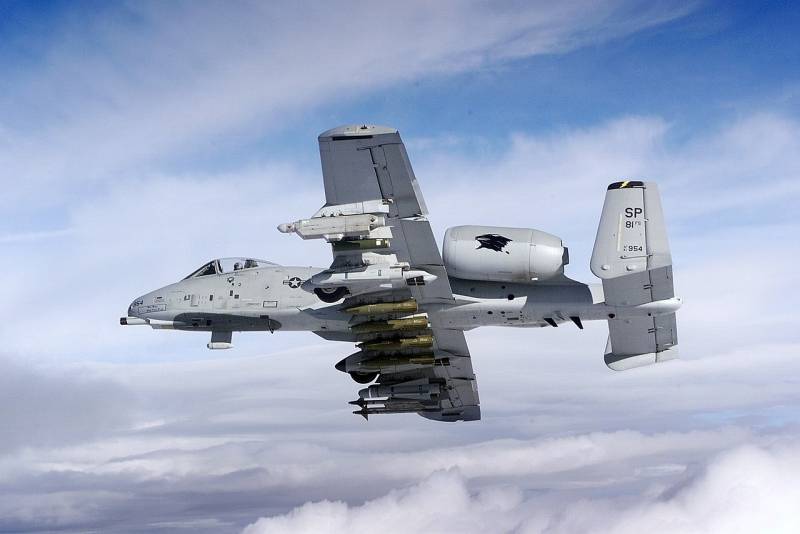 Also, the Russian attack aircraft loses to its American counterpart in the practical flight ceiling, which is limited to 7 km. The American attack aircraft is able to climb to a height of 13,380 meters. Both aircraft have practically the same thrust-to-weight ratio at normal take-off weight, but the Su-25 wins here by a small margin. At the same time, the maximum take-off weight of the A-10 is noticeably higher – 22,700 kg, against 19,300 kg for the Su-25 (according to the Sukhoi company). It is not surprising that the Su-25 noticeably outperforms its competitor in terms of climb rate – 60 m / s versus 30 m / s for the A-10.

If we talk about the possibility of using outside concrete airfields, then the Su-25 has advantages, which can take off from unpaved strips. At the same time, the take-off run of two aircraft with maximum load does not differ much. 1050 meters for the Su-25 versus 1150 meters for the A-10. Both aircraft were designed to operate in a full-scale war. Therefore, we got a fairly strong landing gear and large straight wings that allow you to take off even from short, uneven stripes. The Americans built the plane with the expectation that it could take off from unfinished or damaged airfields, taxiways, and straight sections of highways. Incidentally, this is another explanation for the location of the two engines on top of the fuselage. This solution was chosen by the designers to reduce the risk of engine damage by foreign objects during takeoff from unprepared or damaged runways.

According to test pilot and Hero of Russia Magomed Tolboev, who flew both aircraft, the Su-25 is a more maneuverable attack aircraft, capable of performing complex aerobatics, while the A-10 has limited roll and pitch angles. “The Su-25 can fit into the canyon, but the A-10 cannot,” Magomed Tolboyev noted in an interview with Russian media.

The A-10 Thunderbolt II is an attack aircraft designed primarily to combat enemy armored vehicles, including tanks. Its main armament is not rockets and bombs, but a unique seven-barreled 30-mm artillery mount GAU-8 Avenger, around which the aircraft fuselage is literally built. The ammunition capacity of the gun is impressive and amounts to 1350 rounds of 30 × 173 mm. Among the nomenclature of ammunition there are sub-caliber ones, including those with a uranium core. This gun can deal with any enemy infantry fighting vehicles and armored personnel carriers without any problems. But it will not be good for the tanks, if we consider that sub-caliber ammunition from a distance of 1000 meters pierces 38 mm of armor at a meeting angle of 30 degrees. At the same time, the gun is also distinguished by its high accuracy. From a distance of 1220 meters, 80 percent of the shells fired per volley fall into a circle with a diameter of 12.4 meters. The artillery armament of the Su-25 is noticeably more modest and is represented by the GSh-30-2 double-barreled 30-mm automatic cannon with an ammunition capacity of 250 rounds.

Both aircraft have approximately the same number of suspension points. “Warthog” – 11, Su-25 – 10. At the same time, in such an important parameter as the combat load, the American attack aircraft surpasses the domestic aircraft almost twice. For the A-10, the maximum combat load is 7260 kg, for the Su-25 – 4400 kg. And this is without the ammunition load of the 7-barrel aircraft cannon, which weighs about a ton. The artillery ammunition load of the Su-25 is noticeably lighter – 340 kg.

Separately, the range of ammunition used can be noted. “Warthog” is intended mainly for the use of high-precision weapons, including smart aerial bombs JDAM, which are able to engage and actively maneuver targets. But the main weapon of the American attack aircraft, in addition to the cannon, is, of course, the famous AGM-65 Maverick air-to-surface missiles with an electro-optical targeting system. The missile can hit well-armored and moving targets even in urban areas. In this case, the principle of “fire and forget” is implemented. After the missile seeker is fixed on the target, its flight no longer depends on the position and movement of the attack aircraft itself.

The Russian Rook is also capable of using a wide range of weapons, including smart ammunition. But the main work is carried out by free-fall and corrected bombs and unguided rockets. At the same time, during upgrades, for example, on the Su-25SM3 model, the ability to hit targets with conventional free-fall bombs was significantly increased due to the installation of the SVP-24-25 Hephaestus sighting and navigation system. This complex makes it possible to bring the accuracy of strikes with unguided aircraft weapons to guided weapons. True, this is only true for stationary purposes. 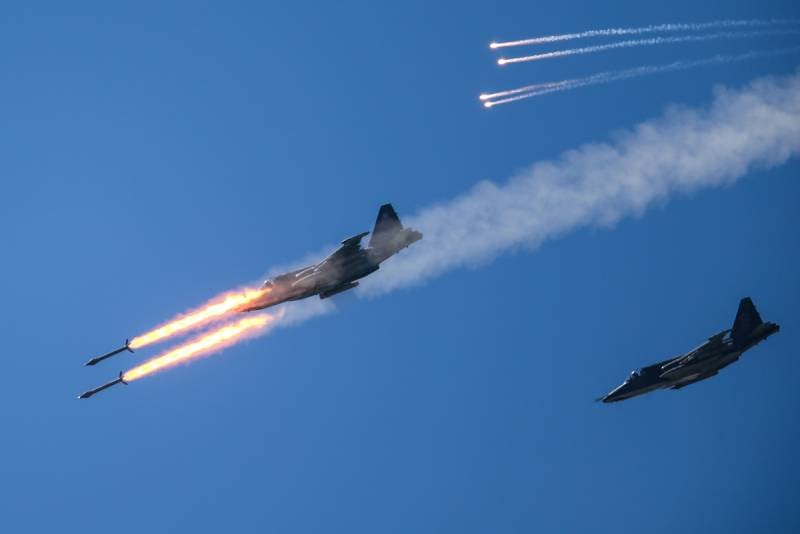 Su-25 attack aircraft at the Aviadarts competition, photo by the Russian Ministry of Defense

The second feature of the Su-25 is the use of air-to-surface guided missiles with a laser targeting system. After capturing the target and launching the rocket, the pilot must hold the target until it is hit. In this case, the laser rangefinder-target designator is located in front of the attack aircraft. The pilot must keep the plane on the course, highlighting the target until it is hit, which in the face of enemy air defense counteraction is associated with significant risk.