The major military conflict in Nagorno-Karabakh, which began on September 27, 2020, attracted the attention of the whole world and seriously influenced the interest in unmanned aircraft. In light of the ongoing conflict, Turkish attack UAVs, including Bayraktar TV2, are of the greatest interest. However, this drone is no longer the pinnacle of Turkish UAV development. Baykar Makina has developed a larger strike drone with greater shock capabilities, Bayraktar Akinci, the first photos of which were leaked to the press back in 2018.

What is known about the tests of the new drone

Bayraktar Akinci is already comparable in size to full-fledged fighters. In terms of its size, it noticeably surpasses Bayraktar TV2. The first photos of the new device appeared on the Internet in June 2018, at that time the development of a new attack drone was already underway. The entire preliminary design phase of the new UAV was completed by Baykar Makina engineers by June 2019, after which the ground testing phase of the unmanned aerial vehicle started in August.

It is known that Turkey has developed this drone in cooperation with Ukrainian specialists. Employees of the Ukrspetsexport company, which is part of the state defense concern Ukroboronprom, took part in the development of the new attack UAV. The Ukrainian side contributed to the drone project primarily with engines and composite materials. The project also took into account the experience of Ukrainian aircraft designers in the design of large aircraft.

The new attack UAV made its first independent flight on December 6, 2019; the drone then spent only 16 minutes in the air. The tests were carried out at the Corlu airfield, located in northwestern Turkey in the Tekirdag province. It is here that the manufacturer’s flight training center is located. The second test flight was completed on January 10, 2020 and lasted more than an hour. In August 2020, the second Bayraktar Akinci prototype began flying. In total, Baykar Makina representatives have already conducted at least five successful tests of two flight prototypes of the new attack drone. Including flights at an altitude of 30 thousand feet (approximately 9150 meters). 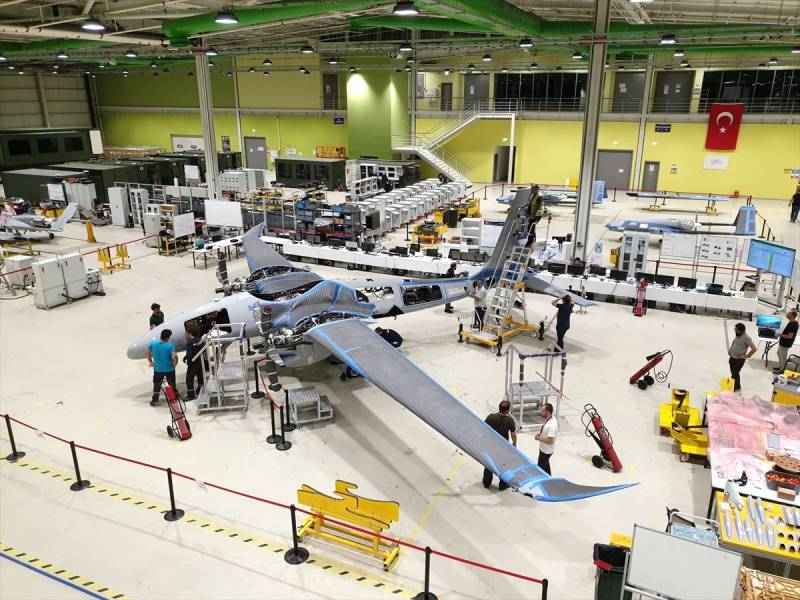 According to the preliminary plans of Baykar Makina, the adoption of the new attack UAV into service should take place by the end of 2020. The first deliveries of aircraft to the Turkish Armed Forces are scheduled to begin as early as 2021.

The new UAV is a reconnaissance and strike high-altitude long-range unmanned aerial vehicle. The drone is quite large, suffice it to say that it surpasses American F-15 / F-16 fighters in wingspan. The wing span of Bayraktar Akinci is 20 meters, the length of the craft is 12.2 meters, and the height is 4.1 meters. The maximum take-off weight declared by the manufacturer is 5500 kg. In this case, the maximum payload mass is 1350 kg (the “Reaper” – 1700 kg). In this case, the weapons, according to the materials presented on the official website of the manufacturer, can be placed on eight external suspension points.

The flight performance of the novelty is very high. It has a declared operating altitude of 30,000 feet (approximately 9,150 meters) and a service ceiling of 40,000 feet (approximately 12,200 meters). In this case, the drone can stay in the air for up to 24 hours. Like its predecessor, the drone has a fairly advanced AI and can fly in fully automatic mode. The device will land on its own, take off, fly in cruise mode.

The power plant of the new strike UAV is represented by two Ukrainian modernized turboprop engines AI-450 with a capacity of 450 hp. each. The engines were developed by the specialists of the Ivchenko-Progress enterprise. It is also possible to install more powerful 750 hp engines. The engines are powerful enough to provide the Akinci strike drone with a maximum flight speed of 195 knots (approximately 360 km / h) and a cruising speed of 130 knots (approximately 240 km / h).

The Turkish engineers increased the survivability of the apparatus by means of a system of software and hardware with triple redundancy. The installation of anti-electronic jamming systems on UAVs is emphasized separately. Such systems are especially relevant when the enemy uses electronic warfare equipment. Bayraktar Akinci will be a drone with its own artificial intelligence system, which should maximize flight autonomy, as well as the level of awareness of the situation on the patrol route, including target identification and determination of their coordinates.

The combat capabilities of the Bayraktar Akinci drone

The new Turkish drone is designed to deliver air strikes against enemy ground targets, as well as conduct operational and strategic aerial reconnaissance. In addition to guided missile weapons and guided aerial bombs, the drone can carry various means of electronic reconnaissance. A feature of the drone will be the presence on board a radar with an active phased antenna array, which will allow the drone to independently identify air targets. Also, the device will receive an air collision warning station and a synthetic aperture radar to obtain radar images of the earth’s surface, regardless of meteorological conditions. The drone will also carry the Aseslan CATS optical reconnaissance, surveillance and targeting system.

The manufacturer also expects to place on board the device the equipment necessary to detect the radars of enemy air defense systems with the possibility of their subsequent destruction with a wide range of guided munitions. One of the tasks of the new strike-reconnaissance drone should be to reduce the load on classic fighter aircraft.

The range of ammunition used is quite extensive. There are free-falling aerial bombs Mk-81, Mk-82, Mk-83, including in the version of conversion into high-precision weapons (JDAM), and small-sized guided bombs MAM-L and MAM-C, which are the main weapons for the Bayraktar TV2 drone. and 70-mm laser-guided missiles CIRIT, as well as ATGM L-UMTAS in the airborne version with a launch range of 8 km. 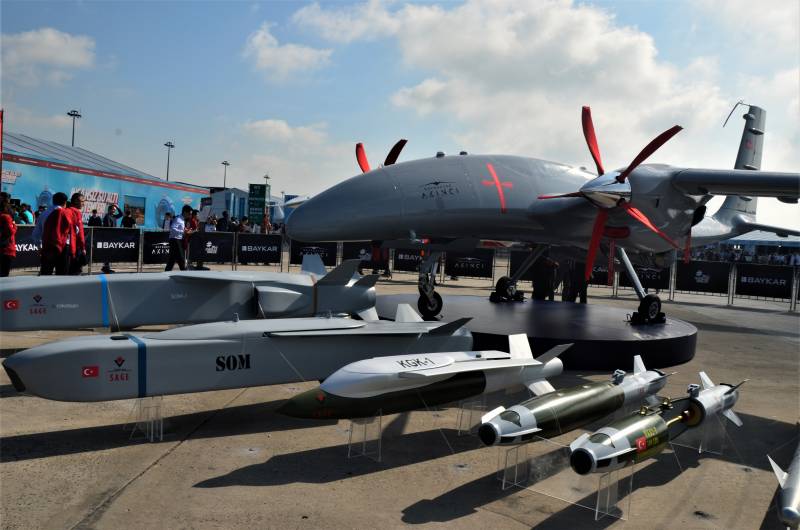 It is curious that the device also received the ability to use guided air-to-air missiles, which allows it to attack air targets. In particular, it is reported that Akinci can carry the Turkish Gokdogan (Sapsan) and Bozdogan (Krechet) missiles, which were created in Turkey to replace the American AMRAAM and Sidewinder air-to-air missiles on F-16 fighters. These are the first missiles of this class created in Turkey. They were developed as part of the country’s ongoing import substitution program for US weapons. UR Gokdogan refers to melee missiles and is equipped with an infrared homing head. In turn, Bozdogan is a medium-range missile, it received a radar seeker.

Among the features of the drone, Turkish developers attribute the fact that Akinci will be the first commercially available UAV capable of launching an air-launched cruise missile. The arsenal of this drone includes the Turkish SOM-A cruise missile. A cruise missile with a length of 4 meters and a weight of 620 kg is able to hit targets at a distance of up to 250 km. The mass of the high-explosive fragmentation warhead of the rocket is 230 kg. Guidance system – inertial, combined with GPS.