Project 1174 large landing ship. In this case – “Saratov”. Launched in 1964, that is, the ship is 56 years old. Surprisingly, he is still afloat. Photo: Artem Balabin

Discussion of the advantages and advantages of the Sunrise Ace type car carrier for military transport in the previous article very clearly demonstrated the curious and quite common phenomenon of a priori judgment. Although I focused on the advantages of a car carrier and did not go too far into comparing it with other types of ships commonly used in military transport, some commentators began to impose this comparison, and in a markedly negative spirit. They say, why talk about this ship at all, when there are ro-rokers and large landing ships (BDK). 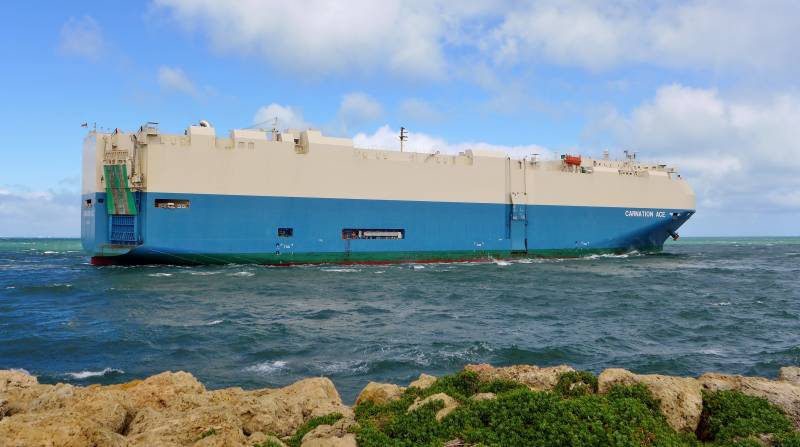 Nobody bothered them to make a comparison, even if it was thesis, in order to support their judgment, but this was not done. One got the impression that both the ro-ro cruiser and the large landing ship, in the minds of some of my opponents, are such unattainable ideals that no other ship can compare with. Simply, one might say, a shining ideal that any comparison offends.

In my opinion, this is precisely that a priori judgment, generated by the fact that its supporters have once and somewhere read laudatory articles about roller-blast vehicles or BDK, on ​​this they formed their views, not going into details.

Therefore, let us compare the BDK and the car carrier as military transport vessels. I also have something to say on roller-blades, especially since there are some non-obvious nuances, but this is somehow later, another time. Now the focus of attention is on the BDK. I put my opinion in the headline partly in order to ignite the discussion: the BDK is worse than a car carrier, and noticeably.

BDK is much smaller

Accordingly, the large landing craft has less carrying capacity. It can take on board 22 tanks and 25 armored personnel carriers, which will amount to 1,373 tons. The carrying capacity of the Sunrise Ace (if we count the capacity of passenger cars in 5196 units and the average weight of a car of 1.5 tons) is 7794 tons, that is, 5.6 times more than that of the large landing craft.

How many tanks can you load?

Although the exact data on the plan for the loading of the large landing ship has not been published, nevertheless, it is possible to estimate the capabilities of this ship approximately, based on the dimensions of the tank hold, docking chamber and upper deck.

In general, the data on the loading of the large landing craft differ. Here is data from the reference book “Ships of the USSR Navy” (vol. 4) that the project 1174 large landing craft can accommodate cargo in three versions. The first – 22 tanks and 25 armored personnel carriers; the second – 50 armored personnel carriers; the third – 52 trucks. The carrying capacity according to the first option will be 1373 tons, according to the second – 700 tons, according to the third – 426.4 tons. This handbook also indicates that the load on the interdeck gangway does not exceed 12 tons, that is, it is impossible to drive tanks onto the deck. In general, what did the designers of this miracle of technology think about? Well, they would have made a gangway for 50 tons and a strong deck for tanks, with the ability to shoot from tanks directly from the deck.

When we begin to consider the issue in detail, it turns out that even in tank capacity, the BDK has no advantages over a car carrier. Sunrise Ace can take twice as many tanks as large landing ships. Which, in general, is completely unsurprising due to the sharp difference in size.

Phenomenal capacity of just one deck of a car carrier

Unlike many of my opponents, who see themselves as fearless fighters in battle, I imagine myself as a rear rat, which, sniffing and wiggling its antennae, does all the boring bookkeeping. So I just started calculating how much everything can fit on one deck of a car carrier. 3rd deck – 5883 sq. meters of area, height 2.1 meters. 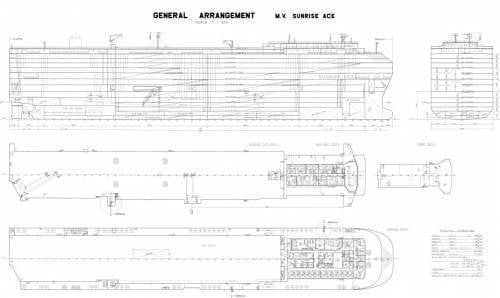 This is only one deck. So tightly you can stuff at least two decks or more freely distribute the cargo over 5-6 decks for better stability of the vessel. The cartridges turned out to be the heaviest load, and it is better to place it on the lower decks, from 8th to 11th.

How is it? Will so much ammunition, fuel and food fit into the large landing craft? If cargo is loaded into the BDK at any of the above positions, then the ship will simply sink under its weight. The car carrier will withstand any of the above-described cargo positions.

The total refueling is 75900 liters for all equipment, or 380 barrels in a round number. Five refueling stations will be 1900 barrels, or 342 tons of cargo.

The total stocks of the brigade for a decent offensive operation will be, by and large, 685 tons. In fact, a little more, taking into account mortars, grenade launchers, cars, all kinds of equipment, and so on – about 1000 tons.

In the end, we got 3288 tons of cargo, which is an airborne assault brigade with everything it needs. Or 42% of the vessel’s carrying capacity. That is, everything fits, and with a solid margin. You can take more shells, cartridges, fuel, food. All this cargo is freely placed on the decks, you can work with it with forklifts and load cars with them directly on the ship.

This is the main military transport advantage of the car carrier over the BDK. A car carrier can land a whole brigade with all the equipment and supplies, equipped for an offensive and intense multi-day battles. As the initial ratios for fuel and ammunition, I took real data on the consumption of one or the other during major offensive operations during the Great Patriotic War.

The BDK can only land a battalion. Moreover, he will not have a large supply with him and can only count on one refueling, one ammunition load and what can be stuffed into equipment or into pockets with backpacks. No, of course, you can stuff about 250 tons of additional ammunition, fuel and food in boxes and barrels on decks, in holds, in corners, in the cockpits of the large landing craft. But only to unload all this stuff there will be no one and nothing. The paratroopers need to fight, and you will have to turn them temporarily into loaders. If you dispense with an additional reserve, as it was, apparently, and was assumed in the design of the large landing craft, then with one refueling and one ammo, the enemy will quite easily break you. There will be another foothold, strewn with bones.

In operational and tactical terms, in the framework of landing operations, large landing ships and car carriers, together with other ships, must act together. Let’s say that we have amphibious forces in the amount of three brigades – 8.1 thousand people. 1 thousand of them were planted on four large landing ships, and its tasks include seizing the port and ensuring the disembarkation of two other brigades, which are on two car carriers. They also carry additional supplies for the brigade operating from the BDK. Their task is to catch on to the shore, seize a port or a place where car carriers can unload. The two brigades that left them are advancing, expanding the bridgehead and creating the necessary conditions for the transfer of large formations.

If the landing on the BDK does not have large transports with troops that will support it and develop its success, then this landing is doomed to defeat and inglorious death.