On November 13, 2020, as part of a national defense conference, which was organized by the Brazilian Ministry of Defense, the Air Force of this Latin American country presented the concept of a future light military transport aircraft, known as STOUT. The new aircraft, the main feature of which should be a hybrid power plant, was personally presented by the Commander of the Brazilian Air Force, Antonio Carlos Moretti Bermudez. STOUT stands for Short Take Off Utility Transport.

It is assumed that the new aircraft will find application in both military and civil aviation and will be able to take off from small airfields. In the future, the new aircraft will have to replace the entire line of light turboprop military transport aircraft C-95 (Embraer EMB-110 Bandeirante) and C-97 (Embraer EMB-120 Brasilia) in the Brazilian Air Force, the fleet of which is now estimated at 83 units. These aircraft can already be attributed to obsolete machines, the average age of 63 C-95 aircraft is over 38 years, 19 C-97 aircraft – 26.5 years.

It should be noted that the project of the Brazilian aircraft manufacturer Embraer looks quite interesting and quite in the spirit of the times. Up to this point, electric motors were widely used only in the automotive industry. Currently, there is a real boom on the planet in the creation of electric vehicles, as well as vehicles with a hybrid power plant. What is Tesla alone with its founder Elon Musk, which has become the most expensive car company in the world. Just a few days ago, the company’s capitalization exceeded $ 500 billion. Whether Embraer will manage to produce the world’s first military transport aircraft with a hybrid power plant, only time will tell. So far, the promising aircraft is only at the concept stage, although it has attracted attention far beyond Brazil.

What is known about the new Brazilian project STOUT

Embraer is responsible for the development of the new aircraft for the Brazilian Air Force. It is currently one of the largest and perhaps the most famous Brazilian firm in the world. Embraer is a true aircraft conglomerate of companies with a leading position in the world in the creation of regional class passenger aircraft. This specialization allows the concern to create rather successful small military transport aircraft, as well as special aircraft for various purposes. 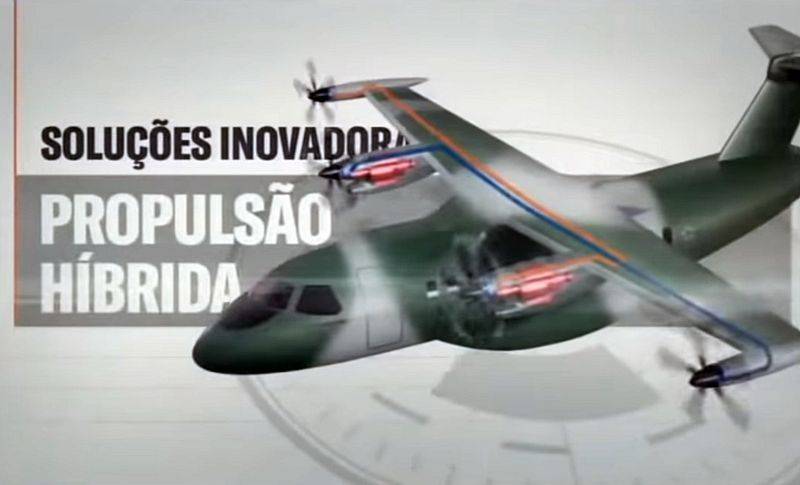 The company is currently fighting the Canadian Bombardier for the right to be considered the third largest aircraft manufacturer in the world after Airbus and Boeing. In addition to the passenger aircraft industry, it is actively developing its military projects, promoting products both to the domestic and foreign markets. In particular, Embraer has designed the Embraer C-390 twin-engine medium-range military transport aircraft. This 23-tonne tactical transporter is currently the largest aircraft in the Embraer line of aircraft.

At the same time, the history of Embraer began with a light twin-engine turboprop passenger aircraft EMB 110 Bandeirante. Its military version was designated C-95. This first Embraer aircraft took to the skies in 1968 and was mass-produced until 1991. Currently, various transport versions of this vehicle are still in service with the Brazilian Air Force.

The first presentation featuring visuals on the new military transport and commercial aircraft took place on November 13, 2020. Embraer acknowledges that the hybrid model unveiled by the military in November is the product of a memorandum signed in December 2019.

At the same time, there is still very little information on the project, it is obvious that it is at the very initial stage of implementation. Currently, the company is engaged in the preliminary design of a new aircraft within the framework of an agreement signed earlier with the Air Force.

The new STOUT light military transport and commercial aircraft is being developed for use in poorly developed airfield infrastructure. The aircraft will be able to take off from short and narrow runways, as well as from poorly prepared runways. Operation from unpaved airfields is envisaged, which will allow the aircraft to be used in inaccessible corners of Brazil, primarily in the Amazon. The Amazon Basin is a hard-to-reach area with an abundance of rainforests and swamps. If the project is successfully implemented, the new Embraer aircraft will find application in other countries of Latin America. And it will also be able to enter the international market. 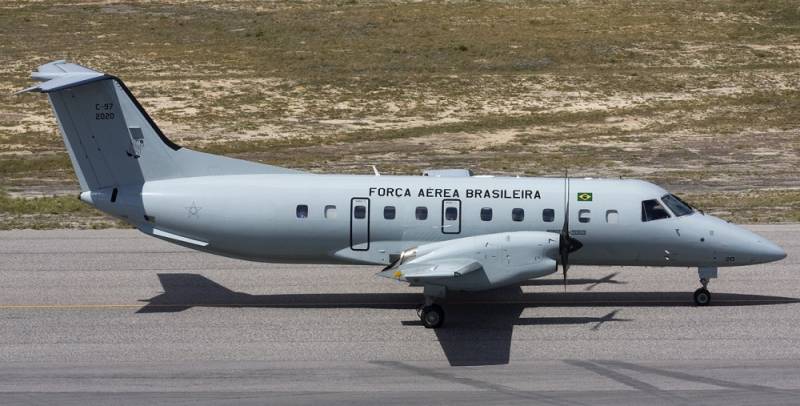 The main feature and feature of the aircraft is the presence of a hybrid power plant. The new aircraft will receive four engines, two of which will be traditional turboprop and two electric. Each of them will receive five-blade propellers. So far, the concept presented involves the placement of electric motors on the wingtips of the STOUT aircraft. Electric motors are powered by generators of turboprop motors.

The new four-engine dual-use light transport aircraft looks like a classic high-wing T-tail. An important difference from the C-95 (Embraer EMB-110 Bandeirante) and C-97 (Embraer EMB-120 Brasilia) aircraft will be the presence of a full-fledged rear ramp, which will facilitate the process of transporting cargo for various purposes, including pallets. It will also allow the aircraft to carry light wheeled vehicles in the cargo compartment. The use of a four-engine hybrid power plant should provide a promising aircraft with good thrust-to-weight ratio, as well as high takeoff and landing characteristics.

The dimensions of the new light military transport aircraft will be comparable to the C-97 model (length – 20 meters, height – 6.35 meters, wingspan – 19.78 meters). At the same time, the outwardly presented model is most of all similar to a proportionally reduced version of the C-390 Millennium medium military transport aircraft with a different power plant and a slightly modified chassis design. 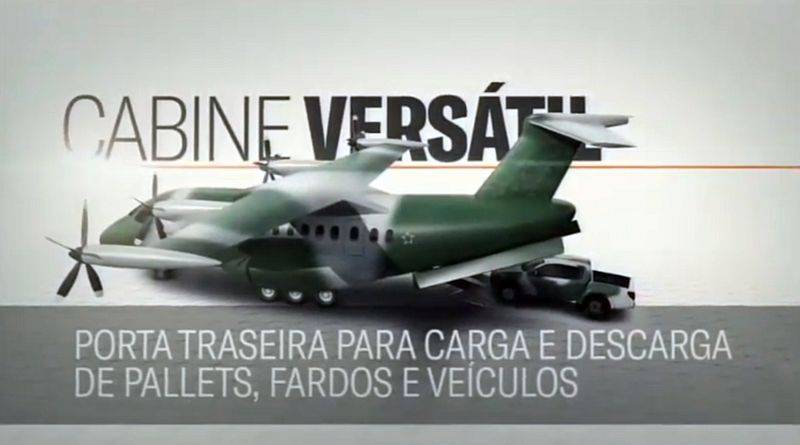 It is assumed that for takeoff of a STOUT aircraft with a maximum load of three tons, runways with a length of 1,200 meters will be needed. At the same time, with a lower load, the aircraft can be operated from unpaved airfields with runways less than 1,000 meters. This is reported by the aviation Internet publication Cavok Brasil. According to a presentation presented by the Brazilian military, the new four-engine light military transport aircraft will be able to transport up to three tons of cargo over a distance of 2,420 km. Also on board it will be able to accommodate 24 paratroopers or 30 paratroopers in full combat ammunition.

It has already been announced that the aircraft was initially developed in a transport version for the transport of goods (including on pallets) and paratroopers. Also on board can be installed special medical modules and medical equipment. The transport version of the aircraft with a hybrid power plant will be able to be used by both military and civilian companies involved in cargo transportation.

In the future, a passenger version of STOUT can be created on the basis of this model. According to the Commander of the Brazilian Air Force:

“The new aircraft will be able to cover several operational needs of the military: the landing of paratroopers, the delivery of goods and personnel in the jungle, the transportation of the sick.” 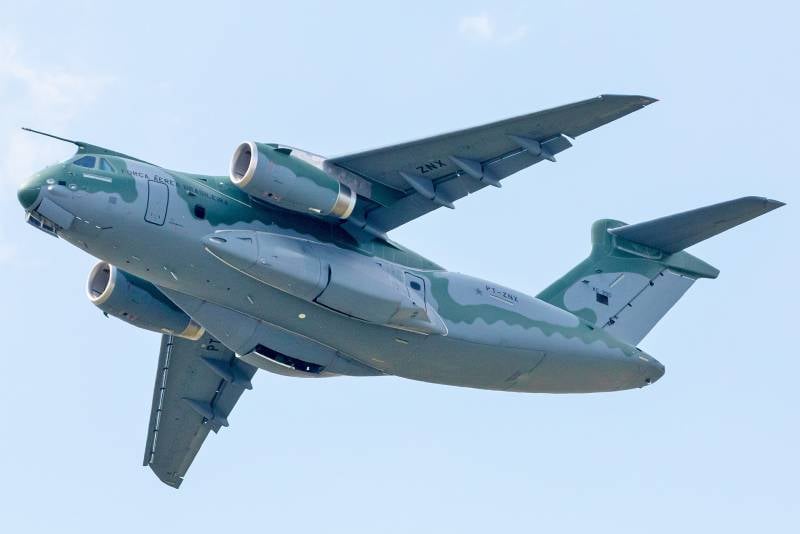 It is reported that Embraer, the government and representatives of the Brazilian Air Force expect to use the country’s needs for a new light military transport aircraft to accelerate work on the creation of hybrid-electric aircraft.

According to a number of experts, such aircraft represent a promising direction for organizing suburban or regional passenger and cargo transportation due to the possible reduction in fuel and maintenance costs.

Also, these aircraft will have less negative impact on the environment.