The receiver of the A-5 shotgun. Photo by Alain Daubresse

Weapons and firms. Although it is said in the Bible that He does not favor the speed of human feet, but only speed in a person’s life means a lot. And it is clear that not only in walking, but also in shooting. So, different designers tried at different times to make it so that it was his weapon that fired most of the others. The first to use the recoil force to accelerate the shooting process was the famous H. Maxim. However, John Moses Browning, who was collaborating at that time with the Winchester firm, did not waste his time either, and already in 1898 he began work on several types of self-loading rifles at once, using the recoil force to operate the automatics. Among the patentable designs was the Browning Auto 5 (or Automatic 5 – A-5) smoothbore shotgun, which used the recoil energy of the barrel for reloading, which he developed in 1898. A patent for it was obtained in 1900, and it turned out that it was the first and, moreover, a successful self-loading rifle, which was in production until 1998! 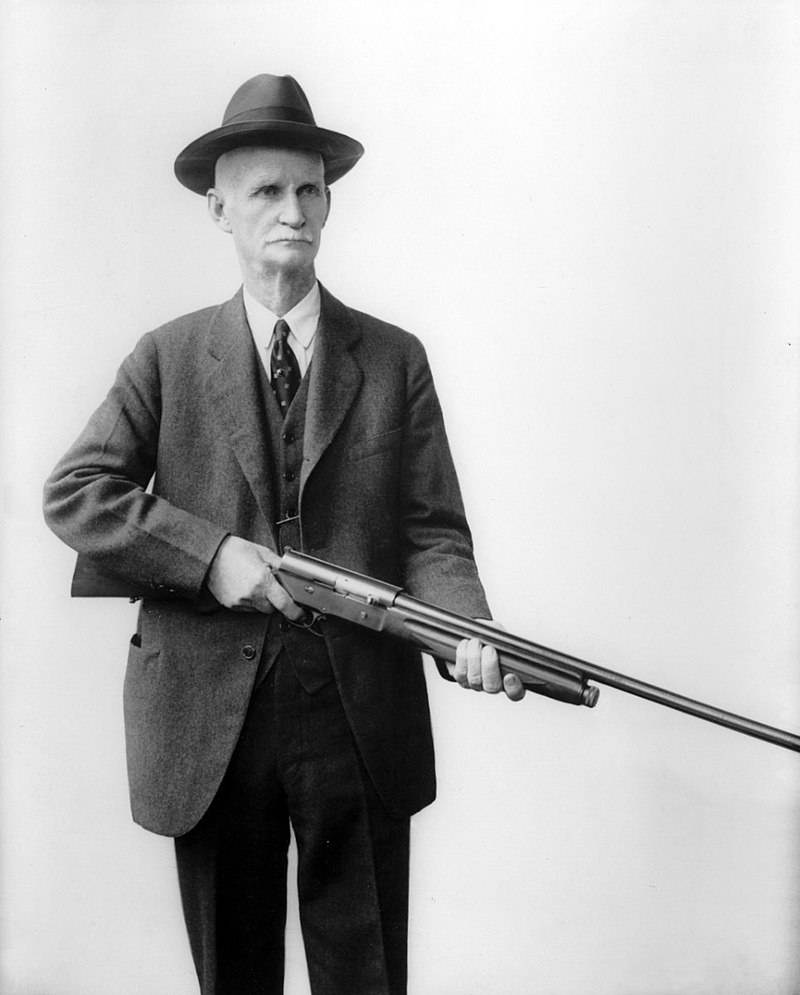 And now it’s like this: there were already materials about this weapon on the VO. In 2016. But that was a long time ago. In addition, materials from publicly available Internet sites and Wikipedia were used in their design. But you always want something new, right? So in this case, you, dear readers of VO, will find something new here as well.

Drawing of shotgun A-5 from the catalog

The most interesting thing is that Browning designed not one gun, but three options at once (and this later came in handy for him!), And in all three options, the recoil energy of the barrel was used for reloading. He considered one of them the most promising and offered it to his longtime partner, Winchester. However, the fate of the new gun was adversely affected by the human factor. It’s just that the plant director T. Bennett, convinced of his experience, considered Browning’s development unpromising. It is important to understand here that personal experience, of course, always plays a certain role. But instead of conducting a thorough market research of the market, Bennett decided everything himself and, as it later turned out, made a very serious mistake. True, in this case, an important role was also played by the fact that Browning this time asked from the company for his design not a fixed amount, as it was before, but a certain percentage of the cost of each rifle released by the company, which seemed too expensive. 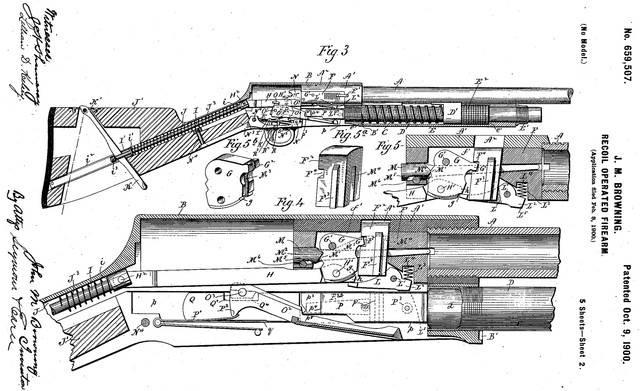 Browning patent for a recoil gun, 1900

Then Browning turned to the Remington Arms Co., but he was unlucky there either: its president died of a heart attack right in his office just a few minutes before meeting with Mr. Browning, and, of course, no one would decide there after that for a long time. could not do anything. But Browning did not want to wait for the weather by the sea, and he turned to the Belgian company Fabrique Nationale, with which he already had experience of cooperation, and which produced his pistol, created by him in 1896 under the FN Browning model 1900 brand. once approved and immediately began to release. Moreover, Browning made 10 thousand guns in order to then sell them in America and he was immediately successful – all of them were sold in the first year. After that, in 1906, he offered Fabrique Nationale some of his rights to transfer to the Remington Arms company, after which Remington began producing Model 11 guns, with the most minimal differences from the Belgian model. 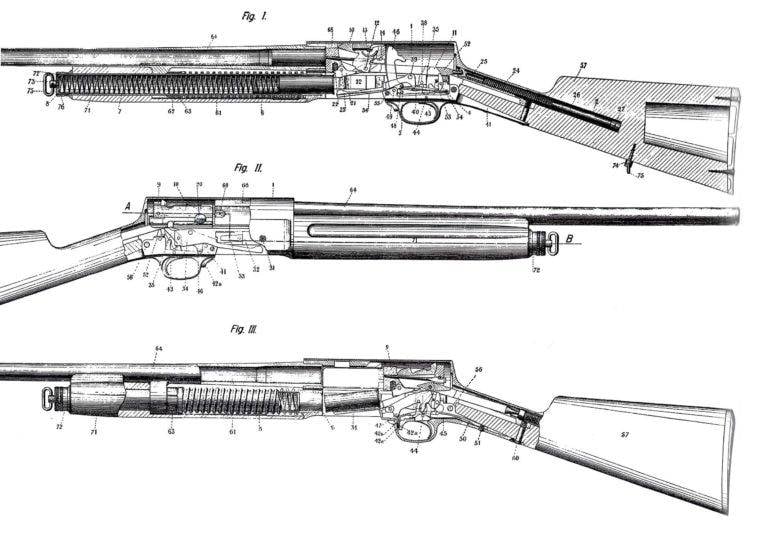 Diagram of the device A-5

The gun gained popularity among hunters, and then it began to be used even in the army. It seems to be already from the First World War, but there are no photographs of American soldiers of that time with this gun. However, this does not mean anything, since it was used in World War II and even during the Korean War. And the last time it was used at all during the Vietnam War, where Browning Auto 5 again proved to be the best. 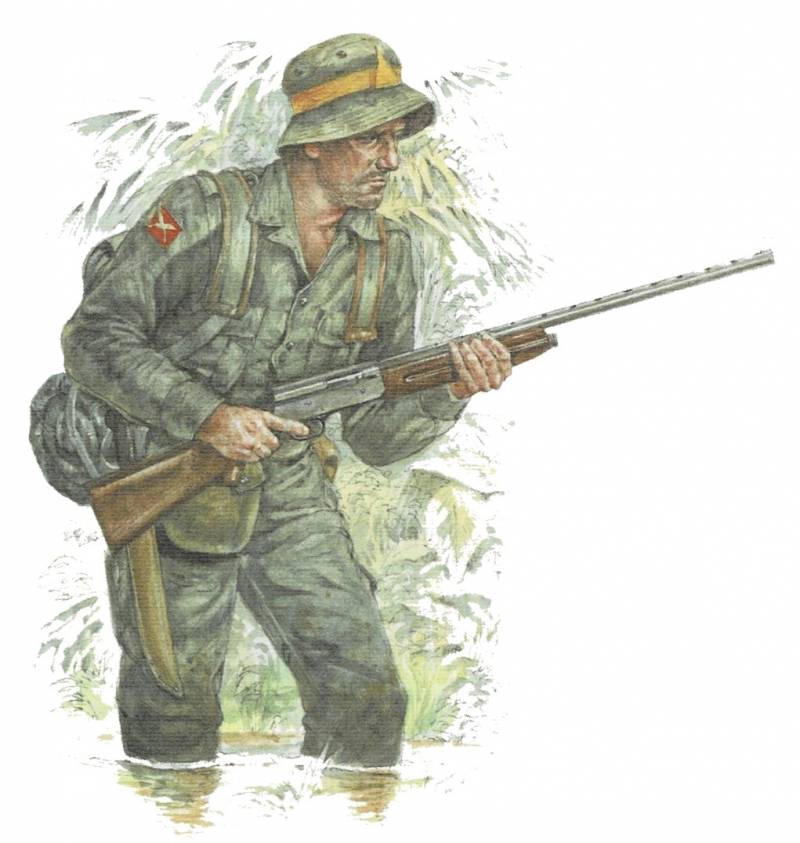 A soldier of the 18th Separate Brigade of the British Armed Forces in the jungle of Malaya with an A-5 gun in his hands. Illustration from Christopher Shant’s book Infantry Weapons: An Encyclopedia of Small Arms. M .: Omega, 2004.S. 224

After World War II, these guns were widely used by the military in parts of the world such as Central and South America. However, Browning’s rifles became a real military weapon only when the uprising in Malaya was suppressed in 1948-1960. The British Army used Greener GP and Browning Automatic rifles throughout this protracted campaign, sometimes shortening the long barrel for convenience. Most of the guns used by the British were 12-gauge with a five-round magazine. Shooting was carried out with large-shot hunting cartridges.

Very soon the British realized that the self-loading rifle was the best weapon for close combat in the jungle. When repelling an ambush attack, the Browning A-5 rifle was good in that five charges from it could be fired in three seconds. At the time, the use of large-caliber rifles (the Remington Model 870R was also used) did not receive much publicity, but many soldiers who served in Malaya during the uprising willingly used the A-5. It was also widely used in Africa during the suppression of the Mau Mau uprising in Kenya. True, the soldiers complained about the excessive, in their opinion, the length of the barrel and that when they shortened it according to their own understanding, the guns began to “be capricious.” Browning’s rifle was again actively used during the war in Rhodesia against the partisans. In some places, these guns are still used, although the combat modification of the A-5 does not officially exist.

A-5. View from the right. Photo by Alain Daubresse

In a word, this “Browning” turned out to be among the most successful developments of Browning and one of the almost massive guns and successful guns not only of its era, but of the 20th century in general! And it is clear that he owes this success first of all to the perfection of his design.

By design, the Auto-5 is a semi-automatic long-recoil smoothbore shotgun. The cartridges are stored in a tubular magazine under the barrel, and another, of course, can always be inserted into the chamber. By the way, it was precisely because of the number of potentially used cartridges that the name of the gun was born: four in the store and the fifth cartridge in the barrel – only five. When fired, the barrel and the bolt move back together a distance exceeding the length of the sleeve and cocking the hammer again. When the barrel returns to its original position, the bolt remains behind, and the spent cartridge case is ejected through the hole on the right side of the receiver. Then the bolt, pushed by a spring in the neck of the butt and in the butt itself, goes forward and feeds the next cartridge from the magazine into the barrel. Such a device was the first of its kind and was patented by John Browning at the turn of the century in 1900. 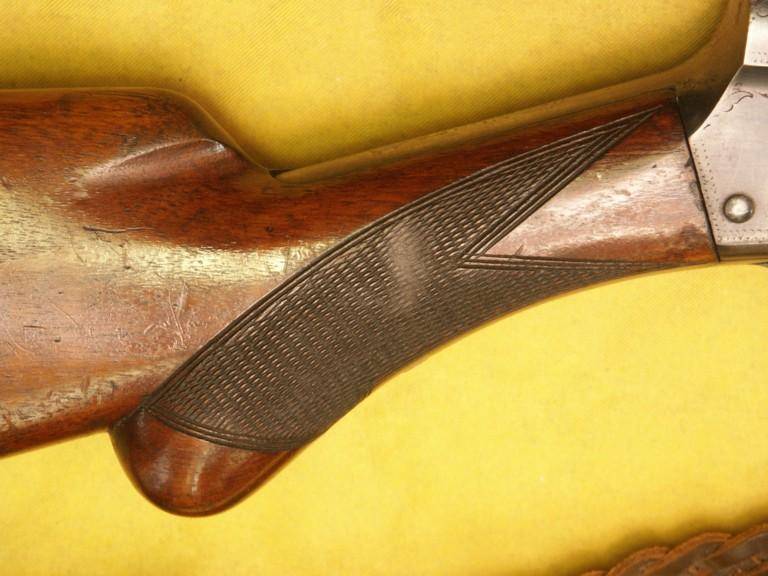 What a thread on a semi-pistol buttstock … Simply amazing! Photo by Alain Daubresse

Interestingly, a hole in the bottom of the receiver is used to load cartridges, and not on its side. Most A-5s have removable magazine covers that prevent more than three cartridges from being inserted into the magazine (two in the magazine and one in the chamber) in accordance with US federal migratory waterfowl laws and some state hunting regulations. But with the cap removed, the total capacity is just five rounds. If the chamber is open (the bolt handle is retracted), then the first sleeve inserted into the magazine tube will go straight into the chamber (under the ejection hole there is a manual bolt closing button), then the bolt closes, and all other sleeves that the shooter will insert into the chamber enter the store. 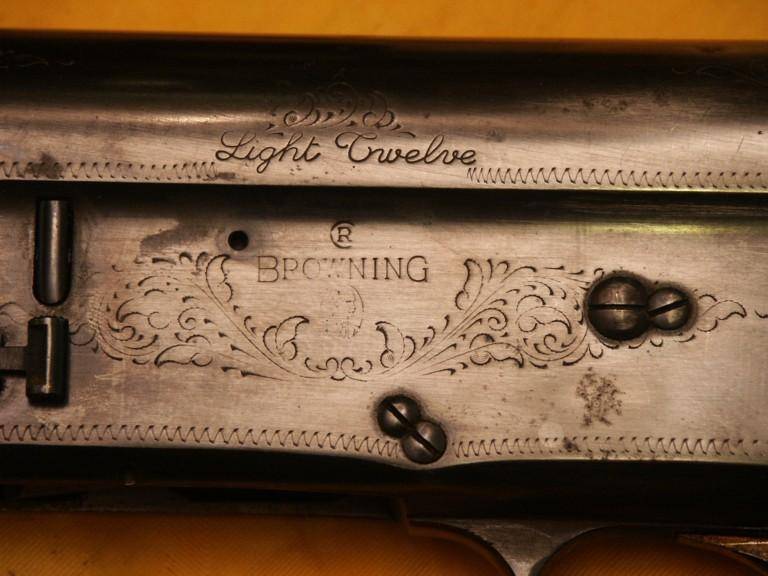 “Lung of the Twelfth” is the marking of the Browning A-5 shotgun. Photo by Alain Daubresse

The A-5 has an ingenious tapered ring system that fits over the barrel and slows down the movement of the barrel backward. Correct fit of these rings is very important for good shotgun performance and long gun life as it provides control over excessive recoil. Friction rings are set depending on the type of charge that is planned to be fired from the gun. Well, how to select different settings for this or that type of cartridge is written in the user’s manual. 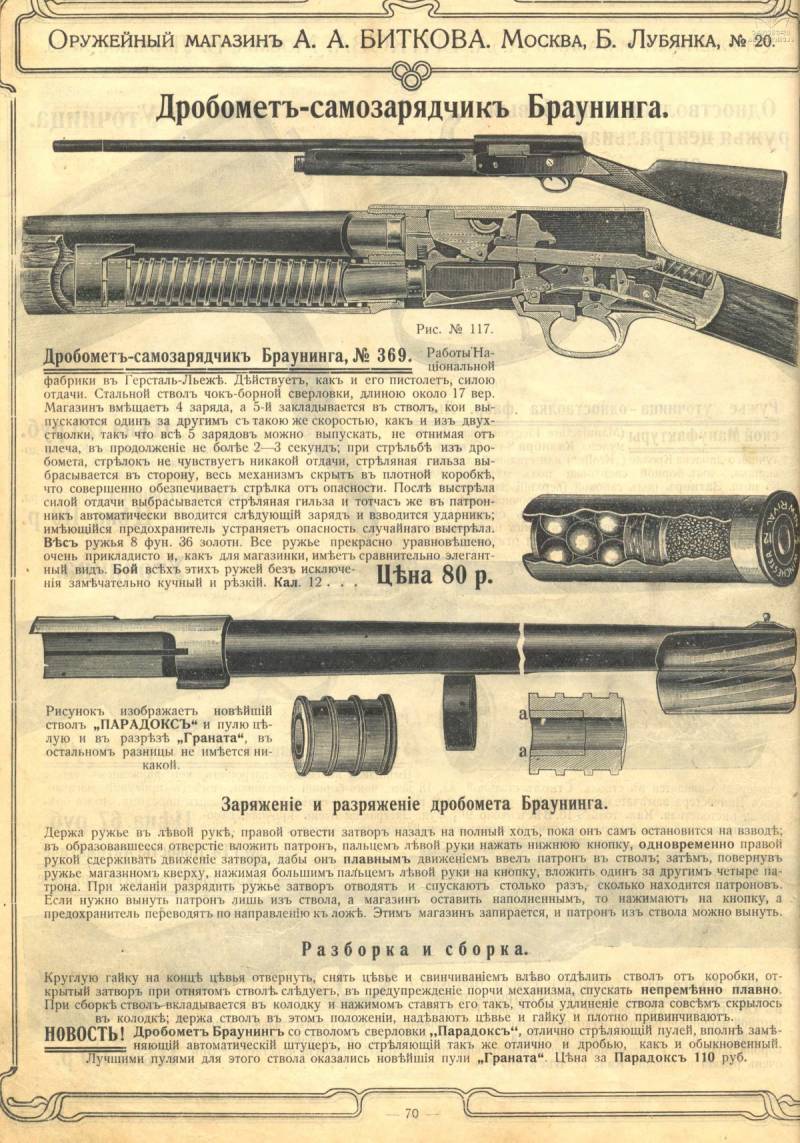 And this is how this gun was advertised in Russia before the revolution. It was necessary to come up with such a name: “self-loading shotgun”!

By the way, in the USSR, back in the 60s of the last century, an analogue of the A-5 was developed – the MTs-21-12 gun, which was then produced for many years … As for the Remington M11 model, which turned out to be the first gun of this type in USA, it was produced and sold in the amount of 850,000 units before its production was phased out in 1947. But even now there are firms that produce the A-5 model under different names.