His pupils are black, empty,
Like the muzzle of a Colt.
V. Vysotsky. Armed and very dangerous

Military affairs at the turn of the eras. After reading this poem by V. Vysotsky, a person unfamiliar with the history of military affairs may well think that the “Colt” is a double-barreled shotgun, since it has two … muzzles. But a poet is a poet because he can see what others do not see, and vice versa. In this case, he meant the black holes in the chambers of his drum. Who knows if they were black though? Indeed, in order to prevent the breakthrough of gases when fired to other charges from the side of the barrel, the bullets inserted into the drum were poured with a mixture of wax and fat, and it was white, well, let’s say, a little yellowish!

Today we will return to the topic of weapons created at the turn of the era, when the development of technology made it possible to create such firing devices as Samuel Colt’s revolver. Considering his patent applications today, one cannot help but be surprised at his … resourcefulness. 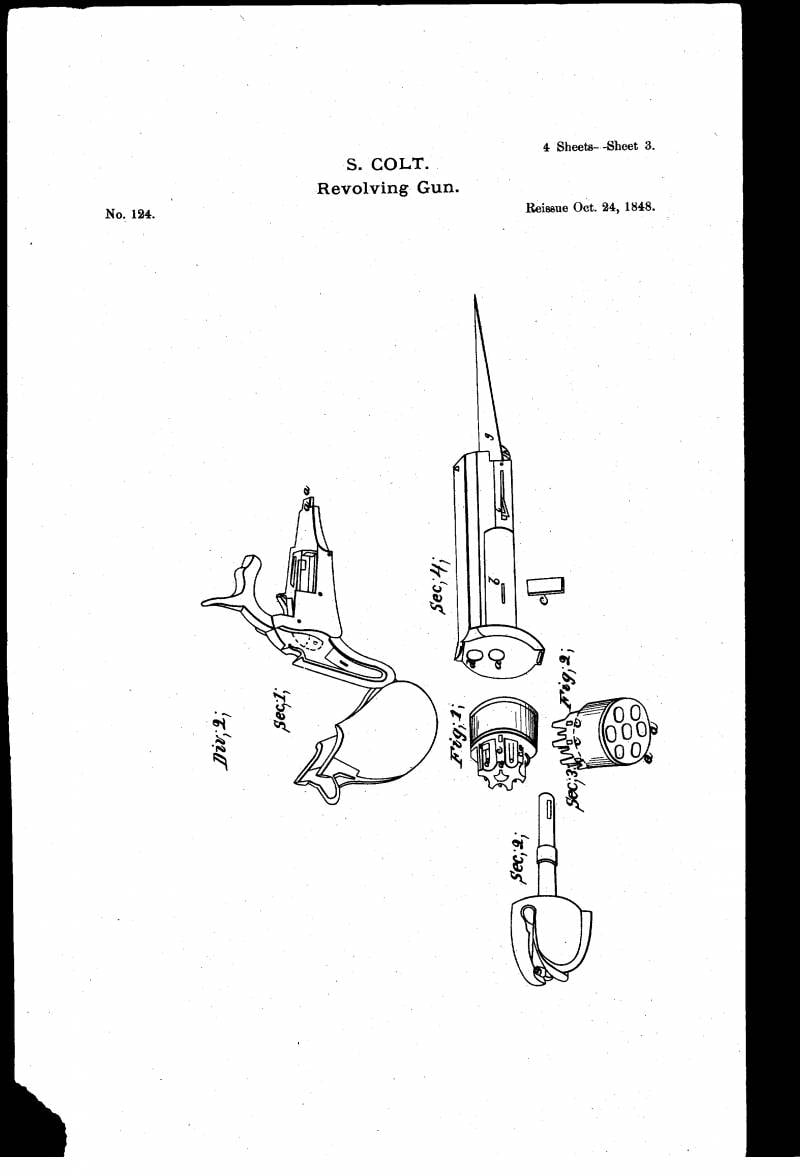 Here is his first, the very first revolver from the patent of 1848, and for some reason a bayonet is provided on it. And this is in case his revolver suddenly misfires, because the device was too new and revolutionary 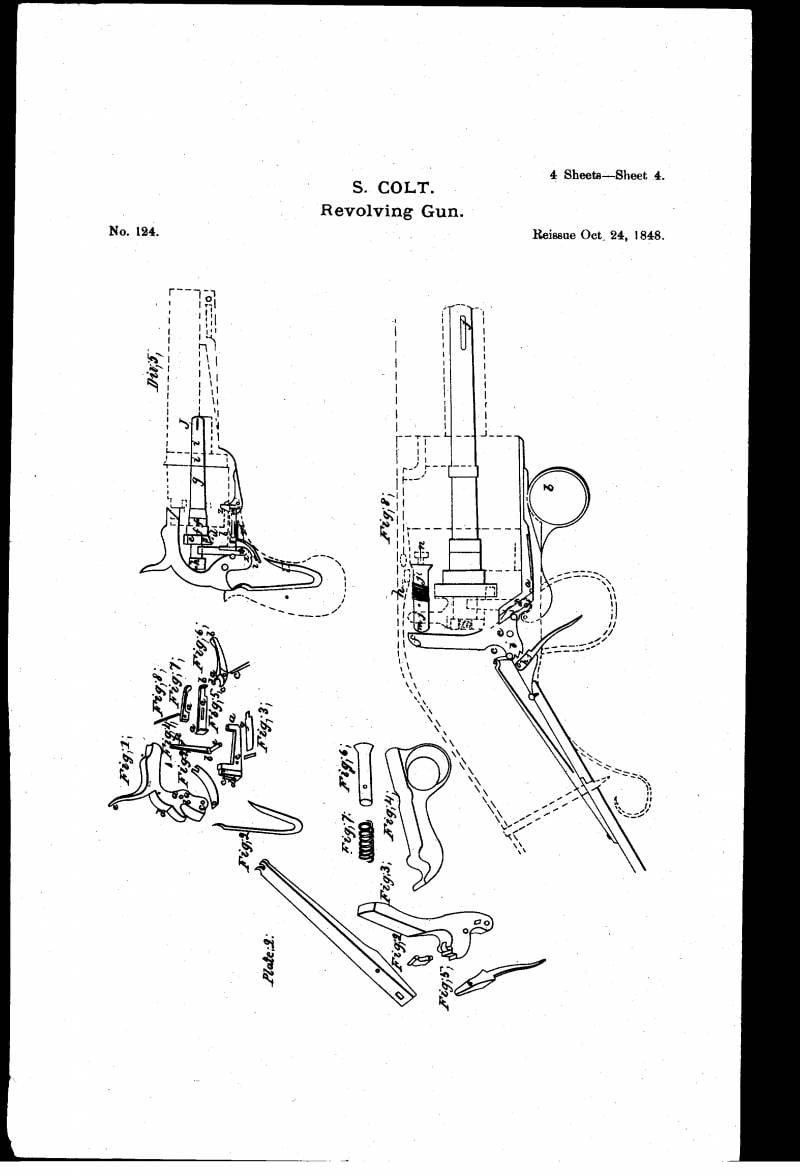 Well, here, in fact, there are two samples at once: a trigger revolver and a hammerless gun, in which the drum with charges is rotated by turning the lower lever with a ring under the finger. Not that, so another sample, undoubtedly, the inventor thought, will surely find its way to the buyer 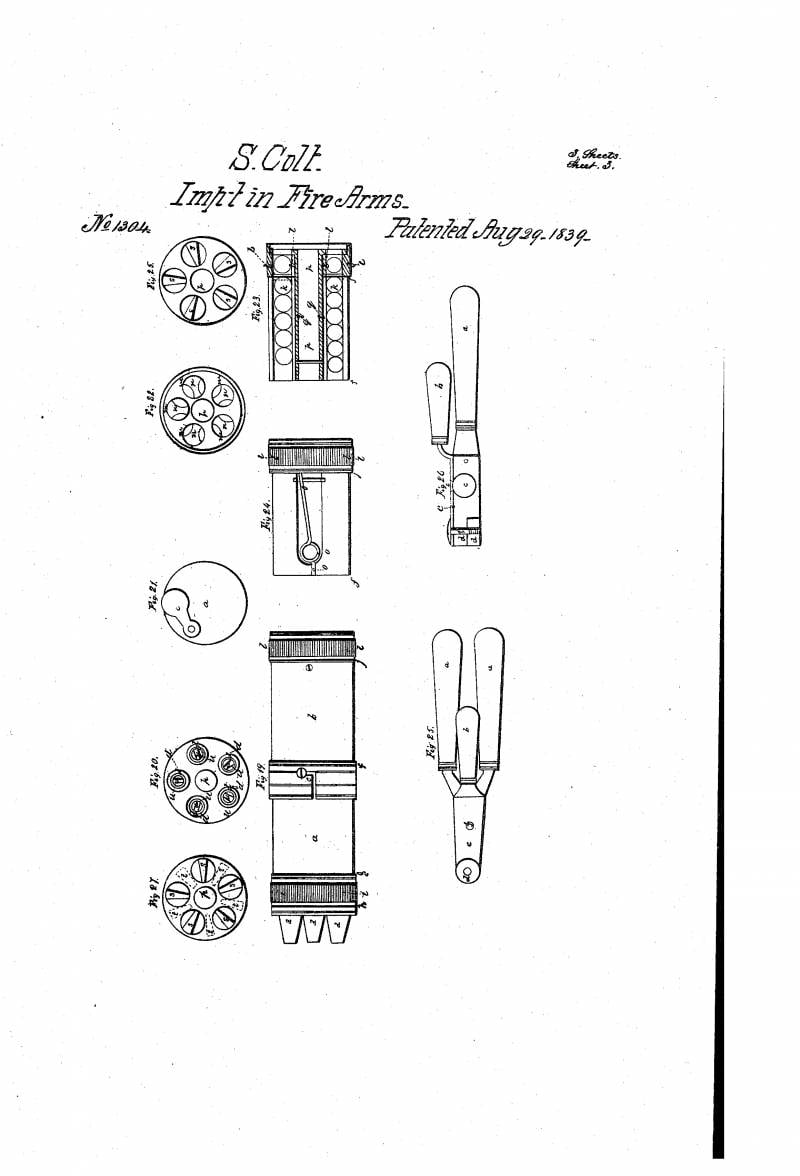 But this patent is simply impossible to look at without emotion.

Consumer care! There is no other way to put it. Firstly, a bullet dispenser, so that with one scrolling of the box rim, all five bullets hit the drum in one fell swoop! Secondly, there is a powder dispenser so that the same and precisely measured amount of powder is fed into each chamber! And thirdly, we see here a hardener for tight coring of a bullet into the chamber and a bullet for casting bullets from lead. Well, the oil putty should have been kept in a special box and not forget how to cover each equipped chamber! 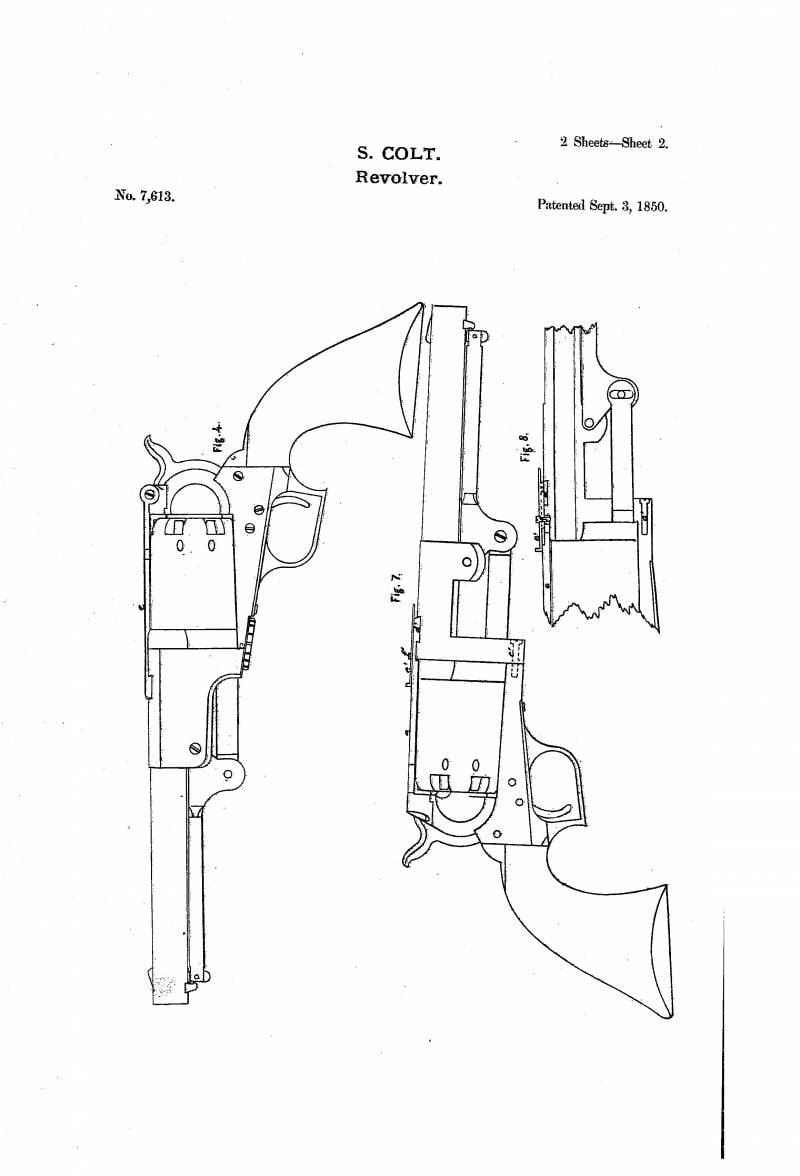 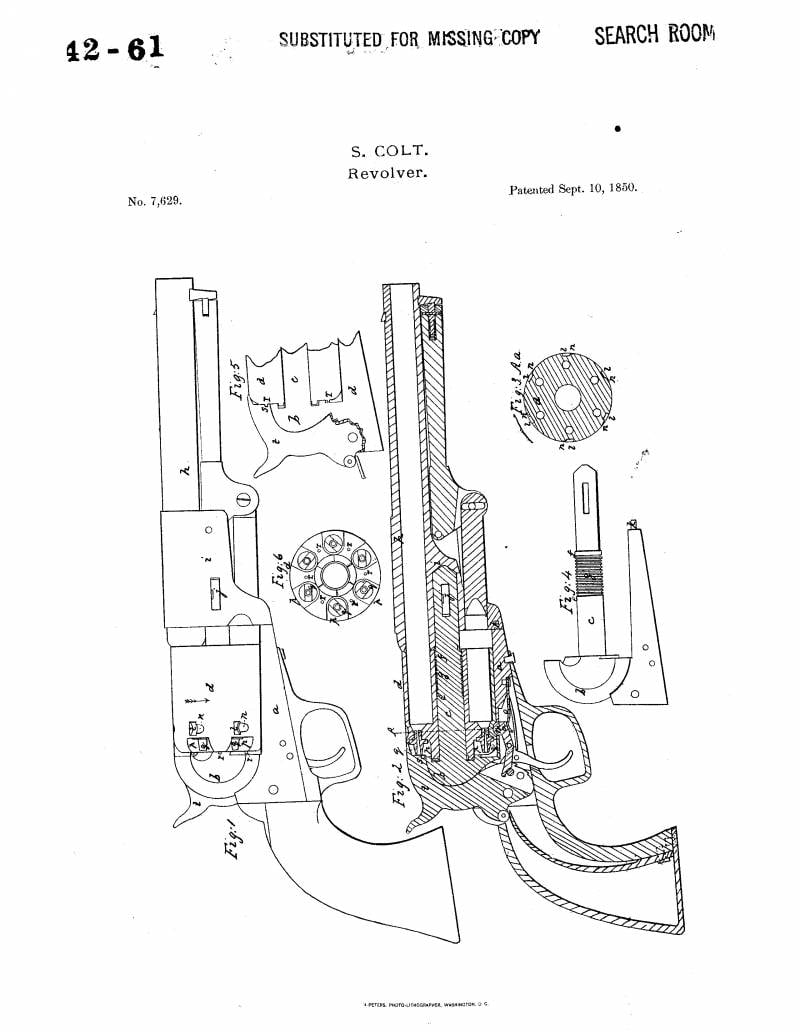 Patents from 1850 for the so-called dragoon model. Here we see actually a classic Colt, from which more and more perfect models then went. Now in his revolver there are no longer five, but six charging chambers, and the drum cannot be removed from it. Therefore, the lever for tightly driving the bullet into the chamber is installed on the revolver itself under the barrel 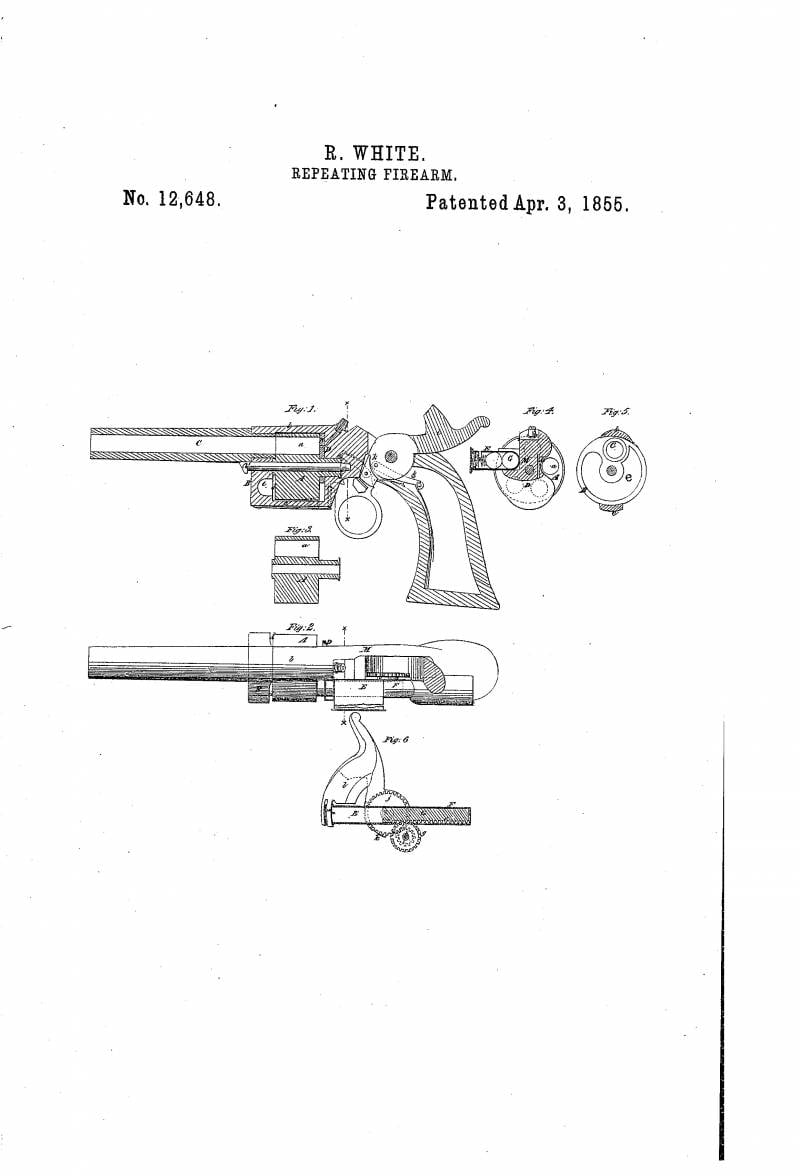 It would seem that everything is fine, it’s better not. But Rollin White thinks differently and in 1855 patented his drum revolver, which uses paper cartridges and primers, which are put on the brand tube in turn!

There are five charges in the drum, and it is turned by pressing the trigger with a ring, but there is only one brandtube. That is, every time before you shoot, you take out another primer from your pocket, put it on and only then shoot. An economical way, you won’t say anything: you won’t shoot a lot like that! 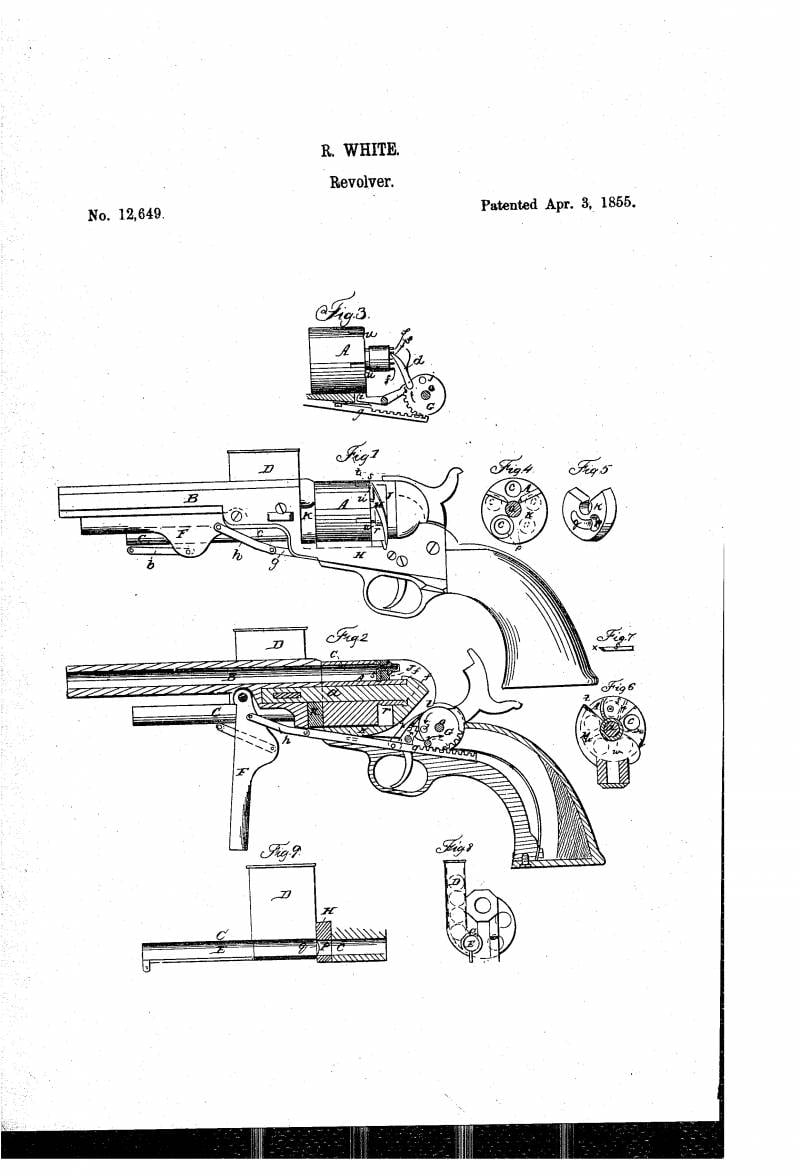 However, this seemed to him not enough, and on the same day he applied for another revolver, essentially the same Colt, but with numerous improvements. On the drawing he has 9 drawings, called “figures”, and they show that he has invented a new one. In the signatures we read: “Fig. 1 is a side view of a pistol constructed according to my invention. FIG. 2 is a longitudinal section of the same. FIG. 3 is a side view of the mechanisms by which the drum rotates and is locked and unlocked. FIG. 4 is a front view of a rotating cylinder with a camera and a shield plate in front of it. FIG. 5 is a perspective view of the cover plate showing the rear side thereof. FIG. 6 is a rear view of a rotating chamber cylinder showing a shutter and a spring casing to protect the charges against a side fire explosion from one side to the other. FIG. 7 – breech, top view. FIG. 8 is a front view of the magazine and charger. FIG. 9 is a longitudinal section of the charger “.

Well, he came up with this: he combined the hardener lever with a toothed rack, which, every time the drum is stuffed, the trigger smoothly retracts back and does not interfere with loading. At the Colt, it had to be retracted and fixed, and then gently lowered, otherwise a shot could have occurred. Moreover, it was not recommended to wear the trigger placed on the primer of a loaded chamber, but to put it on an unloaded one, which, of course, reduced the stock of shots by one. Everything here went smoothly and neatly. Then a magazine for cartridges with bullets and gunpowder attached directly to the revolver was provided in order to immediately push them into the drum after firing. Behind the drum, he put a protective casing so that the flame from the shots would fall into the chambers adjacent to the fired one.

What happened in the end? The result was an obviously overcomplicated design, which did not give any real advantages to the White Colt! That is, it has once again been confirmed that doing it is simple – very difficult, but difficult to do – very easy!

But everyone, however, was surpassed by John Walsh of Walch Firearms & Co. in his attempts to improve the Colt. He patented his design in 1859 and showed himself as a very original and distinctive designer. And he did this: he only placed not five, not six, but respectively 10 and 12 charges in the elongated drum of the Colt, placing them one after the other! 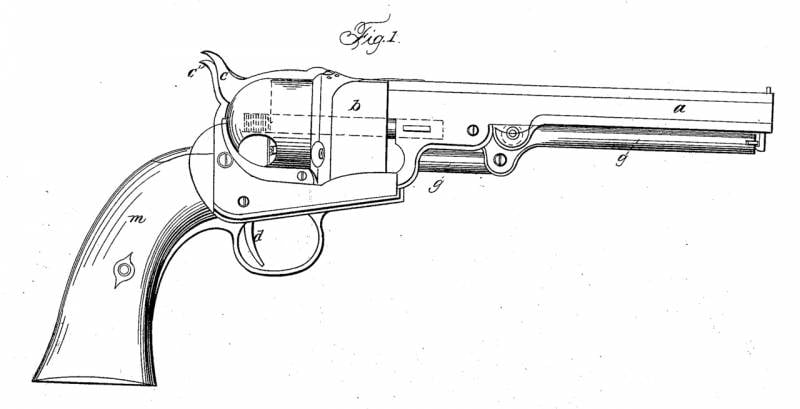 Revolver by John Walsh, drawing from the patent

That is, from one charging chamber with this revolver, you can make not one shot, as usual, but two, in turn! Accordingly, for this, two triggers were installed on it, and depending on the model, one or two triggers.

Known “naval model” for 12 charges of .36 caliber and pocket – for 10, caliber .31! From 1859 to 1862 about 200 Walsh revolvers “naval model” were made for the navy, so this is a very desirable acquisition for the modern collector of weapons curiosities ! 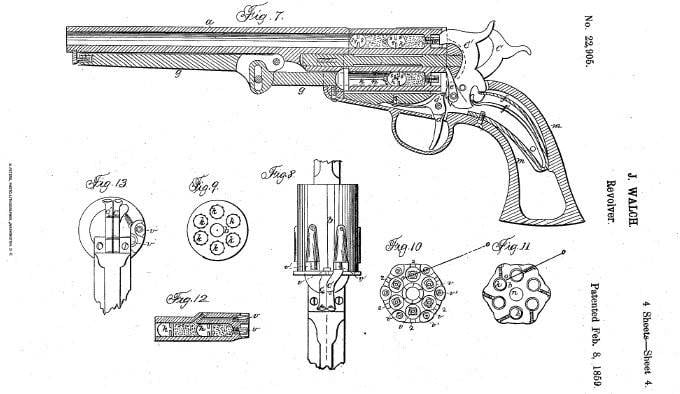 Diagram of a Walsh revolver from the patent: FIG. 8 is a top view of the drum; FIG. 9 – the location of the drum chambers, FIG. 10 shows the location of the brandtubes, FIG. 11 – channels leading to the first charges, FIG. 12 is a sectional view of a charged drum, FIG. 13 is a rear view. Two triggers are clearly visible, left and right

By the way, it was arranged extremely simply. The elongated drum had on its outer side nodules through which the channels went from the brandtubes to the first charges, while the second ones, those that were located behind them, so to speak, “echeloned”, as in medieval multiply-charged petrinals, were ignited by their own brandtubes located as usually. Thus, on the rear side of the drum, the brand tubes were located in two rows with some mixing and the central hammer beat one at a time, and one that was slightly shifted to the right on the other. 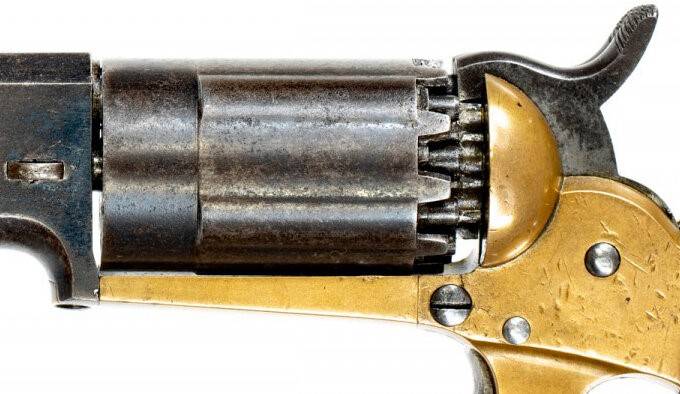 This revolver was loaded in the same way as the Colt and all revolvers like it. Measured doses of gunpowder were poured into the chambers from the dispenser, then a lead round bullet was tightly driven, after which it had to be covered with a composition of “3/4 parts of soap and 1/4 oil”, after which the powder was again poured into the chamber, the bullet was driven into and covered with the specified composition. 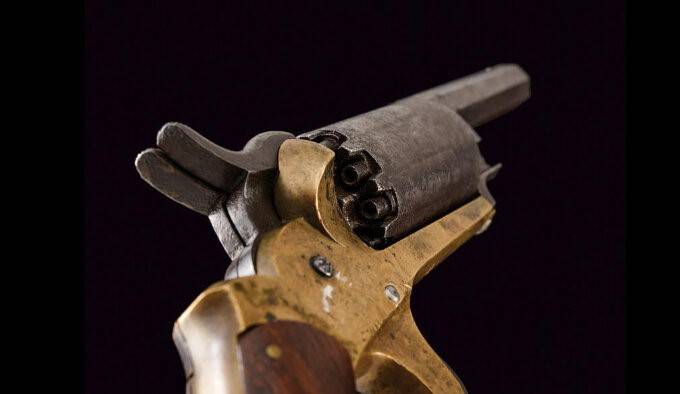 When firing, the first (right) trigger ignited the “front” charge, and the second (left), respectively, the “rear”. With the simultaneous cocking of the hammers, a mismatch of shots could occur, so John provided for a two-stage trigger system, that is, they did not go down at the same time, and the right one always went down before the left one. True, this excluded the “doublet” – two shots at once, following one after the other. 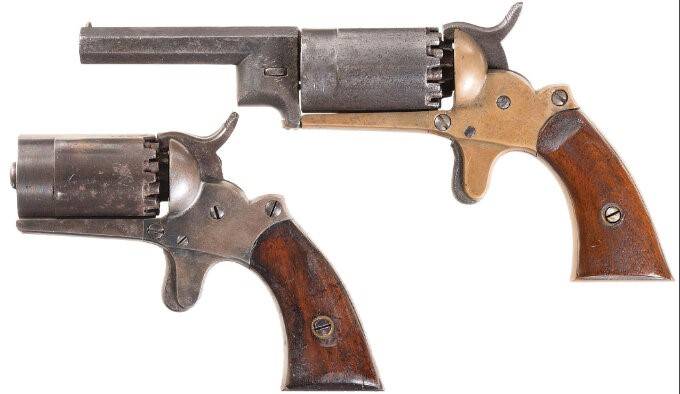 The advantage of the design was obvious: the Walsh revolver, in contrast to the bulky 12-round revolvers of the same Lefoshe, practically did not differ in size from the Colt, but it was possible to make 10-12 shots from it against the usual 5-6 shots. 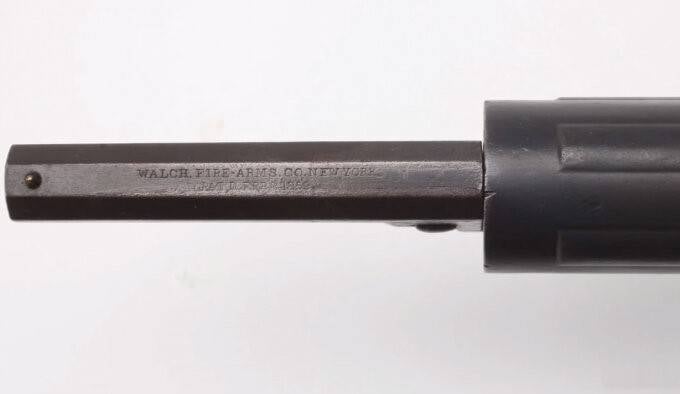 Barrel stamp: “WALCH. FIRE-ARMS. CO. NEW YORK PAT’D.FEB.8.1859 “. About 3000 units of such revolvers were made. They went on public sale in 1861-1862 and, along with many other revolvers, participated in the Civil War between the North and the South.