The history of the appearance of this aircraft is no longer a fairy tale, or an anecdote. From time to time, even in such a highly organized and hierarchical country like Japan, something started to go wrong in the minds and such projects appeared, after reading which you start to shrug your shoulders.
And the Japanese had many such projects. In general, their army and navy, in my opinion, were very strongly influenced by the ideas of universality. And here, on the one hand, there was just a huge field for work, on the other, apparently due to the peculiarities of psychology, such distortions began that …

However – judge for yourself.

We have a proverb that if a Chinese pioneer has no problems in life, then he must create them for himself and overcome with honor.

Something like this was the case in the mid-30s of the last century in the Japanese MGSh (Naval General Staff) in terms of understanding the concept of using seaplanes.

The Japanese admirals were seriously trying to find those who would create a universal seaplane, an all-in-one aircraft. A catapult seaplane that will perform the functions of a scout, fighter, bomber (preferably a dive).

Rave? But no. The Japanese almost succeeded. Everyone who understands will say that the devil is in the word “almost” and they will be right. But the crown of this venture, the Mitsubishi F1M floatplane (there will also be a debriefing about this unique one) has almost become such a versatile person. 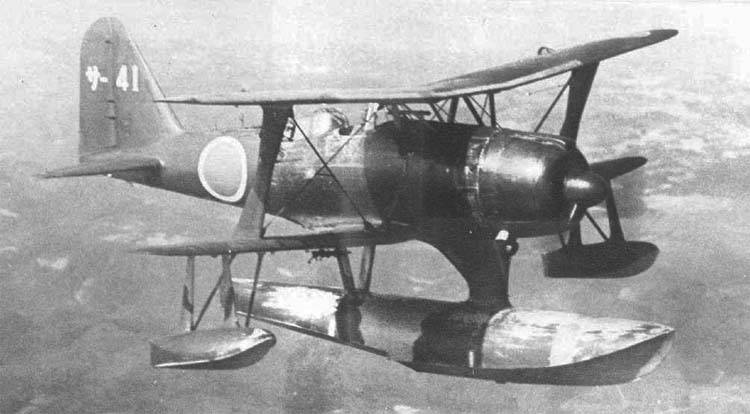 Conceived as a spotter, it was used as a scout (only it did not fly as far as we would like), the Japanese tried to fight on it like a fighter, fortunately, maneuverability and speed were quite (and there was nothing to fight with, two 7.7-mm machine guns – this is ridiculous), a bomber that could dive is also possible (only two bombs of 60 kg each and the range is not serious).

In general, the station wagon turned out, but he was so … Ridiculous.

There was also Aichi E13A1, which, like a fellow from Mitsubishi, fought the entire war, starting from catapults of almost all ships equipped with such. 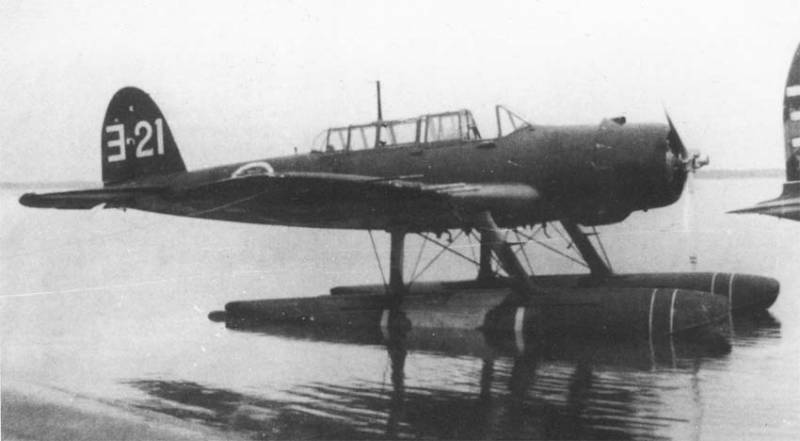 The E13A1 monoplane could lift two bombs weighing up to 250 kg, and “hang” in the air for up to 10 hours, but did not know how to dive and when any enemy fighters appeared, it became a very easy victim.

And, the funniest thing is that when the E13A1 had not yet gone into production, at the direction of the Japanese admirals, they had already begun to prepare a replacement for it. Well, the Japanese Navy really wanted to have such a versatile aircraft. Therefore, the terms of reference for its development was given by merging the projects of the three-seat reconnaissance-spotter E13A1 and the two-seat bomber E12A, which did not go into the series.

What the admirals wanted was just lovely!

The plane was supposed to be a monoplane with folding wings, weighing no more than 4 tons (this is to take off from catapults), it should have a decent forward fighter armament, it could carry bombs weighing up to 250 kg, and have a range and autonomy for 10 hours of flight.

Thank God, the flight characteristics and the number of crew members were not strictly specified.

There was no competition usual for the Japanese navy. The Aichi company was appointed as the winning volunteer, and two designers, Yoshishiro Matsuo and Yasushiro Ozawa, “guilty” in the development of the E12A and E13A in 1940, began to think about the third plane.

They did not succeed very quickly, but they did, and the Type 14 Experimental Double Reconnaissance Seaplane was ready in May 1942. 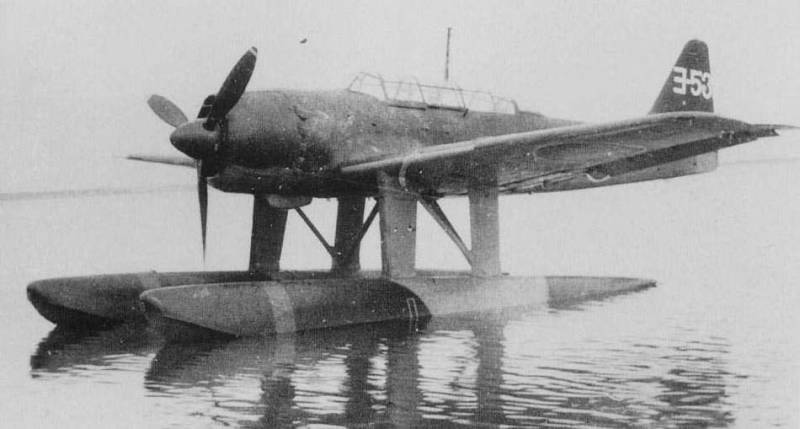 The aircraft had an all-metal construction. Mitsubishi MK8Е Kinsei 51 1300 hp engine promised good flight characteristics, plus the plane was lightened wherever possible, including by removing one crew member.

The crew consisted of a pilot and a navigator-observer-gunner. The navigator was at least relieved of his leadership duties, according to the tradition of the Japanese fleet, it was the navigator who was always the commander of the crew of the naval aviation aircraft.

Armament … Standard two synchronous 7.7 mm machine guns and the same machine gun for the defense of the rear hemisphere. That is, for 1942 about nothing.

But the plane was taught to dive according to all the rules, equipped with air brakes. True, the brakes were not installed in the wing, as was customary in the world, but … in floats! The designers decided not to weaken the wing by inserting and installing drives. 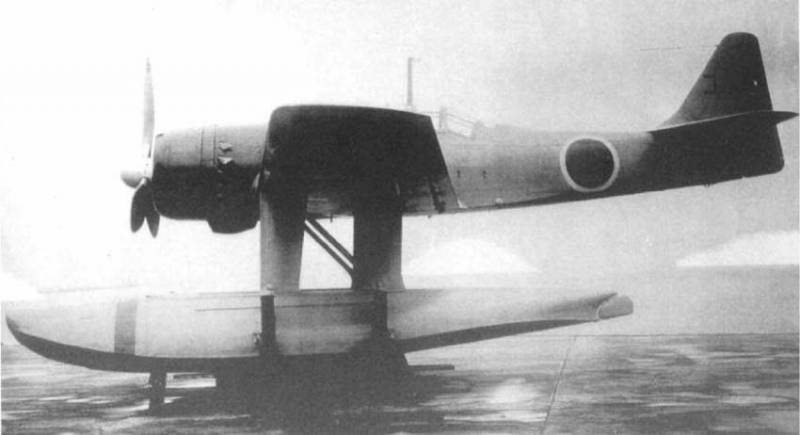 As a result, air brakes (2 each) were installed vertically on the front float struts and opened hydraulically.

The military, looking at all this, said “it will not be enough!”

And since the designers left the wings without unnecessary mechanization, they installed a 20-mm Type 99 cannon with an ammunition load of 100 rounds per barrel. And the rear 7.7 mm machine gun was demanded to be replaced with a 13.2 mm one.

The bomb load was not very rich: either one 250-kg bomb on the ventral suspension or four 60-kg bombs under the wings. Bombing from a dive at an angle of up to 60 degrees was supposed only from underwing bomb racks in pairs, because the suspension under the fuselage did not have a mechanism for removing the bomb from the area swept away by the propeller. So the 250-kg bomb was supposed to be dropped either from level flight, or from a very shallow dive up to 30 degrees.

When all the work on bringing the aircraft into proper condition was completed, it received the official name E16A1 and its own name “Zuiun”, which meant “Auspicious Cloud”. With two cannons and a 250-kg bomb, a very favorable cloud is …

In the meantime, the war was going on, and not in favor of Japan, because the release was complicated by many factors. In general, the Zuiyun series went into production only in 1944, albeit at the very beginning. A total of 256 aircraft were manufactured from January 1944 to May 1945, including pre-production prototypes. 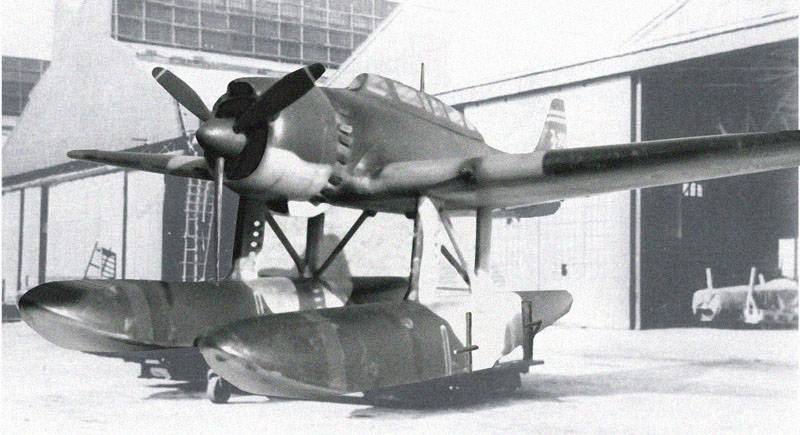 Given the state of the Japanese fleet, the question arose of where to define the new aircraft. There were no longer enough ships. The launch of the production of aircraft carrier ships, but not aircraft carriers, as, for example, the heavy cruiser “Mogami” converted into this hybrid, in which instead of two completely broken aft towers, was equipped with a flight deck with catapults, helped out. A wing of 12 Zuiyuns was to be based on the Mogami.

True, the number of aircraft deployed turned out to be less, only four E13A1 and three F1M2.

Approximately the same was done with the battleships Ise and Hyuga, from which part of the artillery weapons was also removed in exchange for the deployment of aircraft. As a result, outright freaks appeared, not battleships or aircraft carriers, but they are generally a separate conversation about them.

And by the time the Zuiyuns got into their kokutai and the pilots were trained, alas, the superiority of American aviation was undeniable. And the widespread use of “Zuiyuns” became simply impossible, since “Hellkets” and “corsairs” tore in the sky everything that did not flap their wings.

Therefore, they decided to make the new plane night. More chances to survive and cause at least some damage to the enemy. 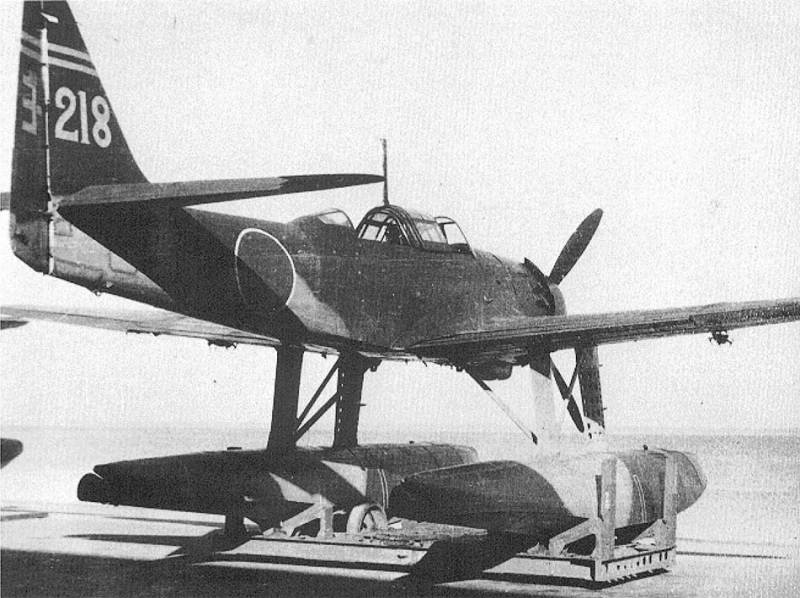 Baptism of fire “Zuyuny” received on the night of November 22-23, 1944, when a group of 17 aircraft attacked American troops in the Philippines, near the city of Tacloban. An unpleasant surprise for the Japanese was the radars, which were targeted by American night fighters, who, together with anti-aircraft guns, shot down three planes. What were the real results of the raid, history is silent.

The next night they decided to repeat it. Obvious stupidity, the Americans proved it by shooting down 7 out of 12 planes.

Then there were the same “successful” attacks by American landings on the islands in the Kanigao Strait, Leyte Island, Panay Island.

December 21, 11 “Zuiyunov” attacked enemy ships near the city of San Jose. Here the first success was achieved, when one of the damaged E16A crashed into the Juan de Fuca transport and seriously damaged it. And the losses amounted to 4 aircraft, including this kamikaze.

On the night of December 26, the first confirmed aerial victory took place. And not just an airplane, but a P-61 “Black Widow”. The crew of the pilot Miyamoto Heijiro and the gunner of Nakajima Hiroshi reported that they shot down the Black Widow, attacking from below and behind with the fire of wing cannons.

It is interesting here that the Americans confirm the victory of the Japanese crew, in this area the P-61 of Lieutenant Eugene Keeley from the 418th squadron really disappeared.

The Zuiyuns were used at night along the entire line of contact with American forces. On January 30 (naturally, at night) a 250-kg bomb from the E16A was received by the Liberty-class Simeon G. Reed transport stationed off the coast near Ilin Island. The bomb caused serious damage, but the crew was able to throw the ship aground and thereby save it.

In March 1945, the Zuiyuns took an active part in the Battle of Okinawa. Basically, the targets were landing ships and boats, which were dangerous 60-kg bombs.

Here, the losses from night activities were less than that of other aircraft, but only because, having understood the essence of the E16A, the command did not throw them at well-protected targets. 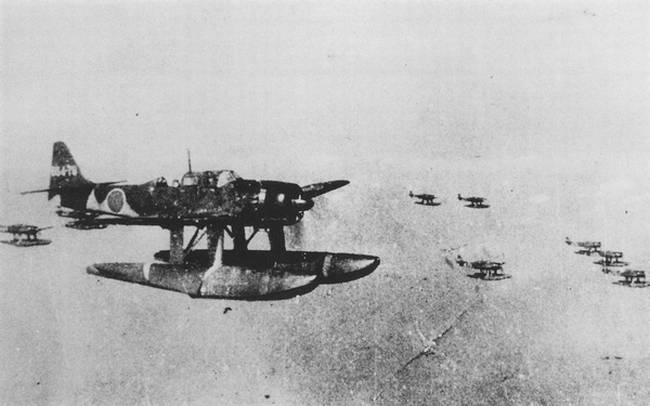 Naturally, at the end of the war, the “Divine Wind” could not help touching these seaplanes. A strike force “Kaitai-1” of 18 E16A aircraft was formed. The detachment was supposed to be used near Okinawa, but the Zuiyunas were unable to take part in the attacks by the kamikaze for a number of reasons, the detachment was disbanded, and the planes were transferred as reinforcements to other units.

In general, for a year and a half of application, the aircraft did not have any special merits. This is understandable, since the versatility of “Zuiyun” was his weak point. Although, it is worth noting that this particular aircraft, like no other, corresponded to the role of a multipurpose universal seaplane. This is undeniable.

The plane really could drop bombs from a dive, could bomb from level flight, could, with a good coincidence, shoot down an enemy plane or storm a boat or transport. He could conduct reconnaissance or work as a spotter.

The whole question was how well Zuiyun could do all this.

As it became clear, everything was very, very satisfactory. The bomb load in an amicable way was terrible for submarines and small landing craft, but the landing boat still needs to be hit. The speed is frankly low, but the flight range was impressive.

But we will not forget that this is primarily a seaplane. Able to take off from a catapult, from the water, splash down and so on. But for this class the E16A was quite a decent aircraft. Still, the idea of ​​making it fit for everything is not the best.

Although the plane was not bad for a seaplane and turned out to be quite elegant in appearance.