The Ukrainian industry offers potential customers a range of remotely controlled combat modules for installation on armored vehicles. So, the company “Nova Tekhnologiya” (Zasupoevka village, Kiev region) has developed a line of products “Volia”. At the moment, two products of this series are presented, and the creation of the third is also mentioned.

The first in the new family was the “Volia” DBM, proposed for the rearmament of old infantry fighting vehicles or similar equipment. This product is designed and manufactured in metal. Even last year, photos of an experienced armored vehicle, made on the BMP-1 chassis and equipped with Volya, were published. There were also reports of the possible serial production of such a DBM.

Literally the other day, information about the new module “Volia-D” was disclosed for the first time. As follows from the available data, it generally repeats the design of the previous “Will”, but differs in reduced dimensions and weight. The lightweight “Volia-D” has not yet been built or tested. In the materials of the developer organization, only computer images of the DBM itself and the BMP armed with it appear. 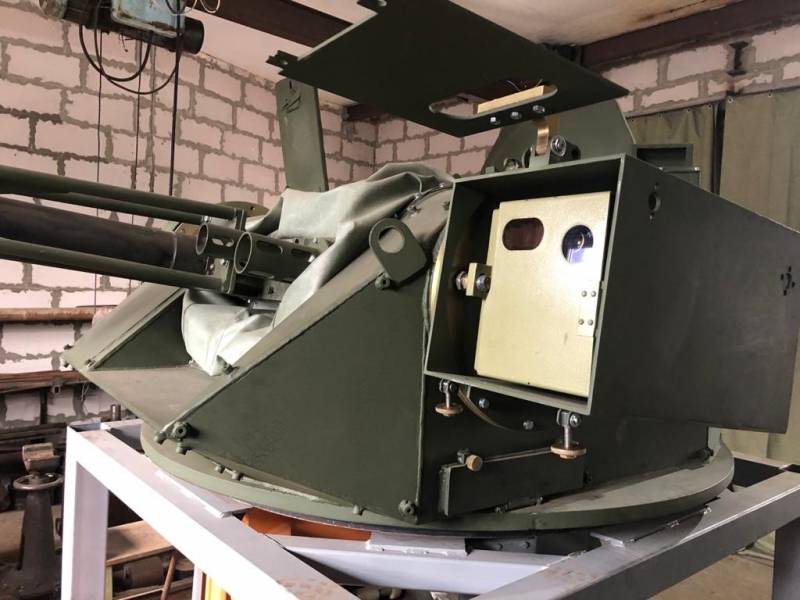 Optics and weapons of “Volya” close-up

The official website of the Nova Tekhnologiya company also mentions the third DBMS of the family called Volia-L, but does not give any details. At the same time, on the corresponding page there is a computer image of the DBM, which can show the appearance of a product with the letter “L”. This is a lightweight module, armed only with a machine gun and suitable for mounting on a wider range of carriers.

Module “Will” is a fighting compartment with a turret carrying weapons, and a turret structure with a workstation for the operator-gunner. The product is 2.15 m wide and 820 mm high. The required shoulder strap diameter is 1.35 m. The total weight with ammunition load is 2 tons. 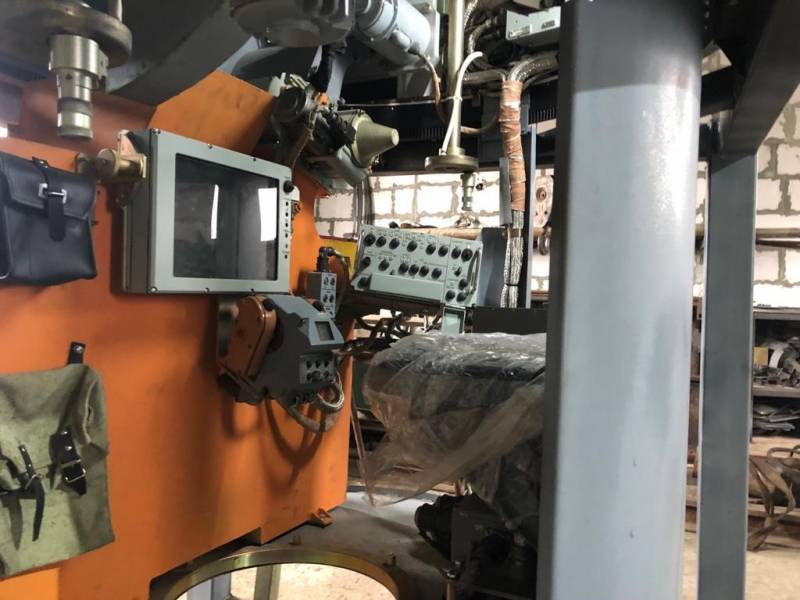 Operator’s place under the tower

In the frontal embrasure of the turret, there is a common installation with a 30-mm automatic cannon ZTM-1 (copy 2A72), a PKT machine gun and a KBA-117 grenade launcher (a copy of AGS-17). Barrel weapons are stabilized in two planes. On the sides of the tower there are swinging launchers of the Bar’or complex. There are 902B “Tucha” grenade launchers.

Ammunition “Volya” includes 290 rounds for an automatic cannon, 116 grenades (of which only 29 are ready for immediate use) and 1400 rounds (350 in the box of the first stage). The launchers carry two guided missiles, two more are inside the module.

The DUBM tower has a block of optoelectronic equipment. The possibility of installing a full-fledged panoramic sight is declared. A digital fire control system is used, which ensures the use of all standard weapons. The maximum detection range of large ground targets reaches 10 km during the day and 3.5 km at night, which should ensure the effective use of all available weapons.

The module is controlled from the commander’s and operator’s consoles. The operator is located directly under the tower, from where access to its internal volumes opens. The commander’s seat can be installed in any part of the carrier armored vehicle. 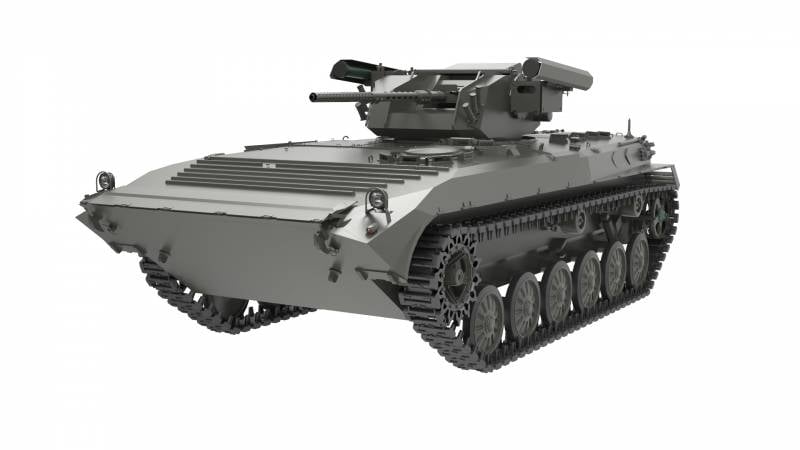 The appearance of the BMP with the module “Volia-D”

DBM “Volia-D” has similar tactical and technical characteristics, but smaller, more compact and does not impose layout restrictions. It is built on the basis of an armored turret of reduced size and weight. At the same time, the composition of weapons and ammunition ready for firing remained the same. It also provides the same level of protection and the ability to install additional armor. The tower has been slightly reconfigured, the location of some units has been changed.

As before, the LMS of the module interacts with two workstations. In the Volya-D project, the operator’s console is “untied” from the tower and can be installed in any part of the crew compartment, just like the commander’s one. The functions and capabilities of the LMS remained the same.

Due to all the measures taken, the width of the module was reduced to 1.88 m, and the height to 750 mm. The combat weight of “Voli-D” without additional booking has been reduced to 1.6 tons. In this case, the overhead blocks weigh approx. 500 kg.

Apparently, the Volya-L DBM is a light combat module equipped only with a machine gun. The image of such a product is published by the development organization and allows you to consider some of the features of its design. In this case, the table parameters of the module are unknown. 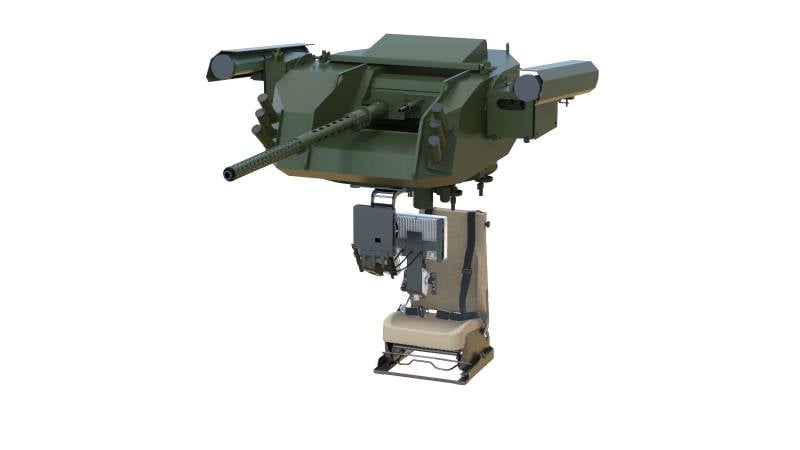 The alleged “Volya-L” is outwardly similar to a number of other modern foreign-made DBMS. The design is based on a carrier-mounted U-shaped slewing ring. A swinging part with an NSV machine gun and an optoelectronic unit under it is suspended between the vertical supports of the device. The box for the ammunition tape is located on the right, above it there is a system for supplying the tape to the machine gun.

Obviously, such a DBMS does not need a developed multicomponent OMS, including a lot of devices. This makes it possible to reduce the size of the operator panel and, accordingly, place it in any part of the habitable compartment. The approximate parameters of the optoelectronic system can be represented, knowing the tactical and technical characteristics of the machine gun proposed for use.

Combat modules of the “Will” series are offered for installation on light and medium armored vehicles of various models. These can be old samples of Soviet production or modern Ukrainian or foreign cars. Thus, the development company can expect to receive contracts. 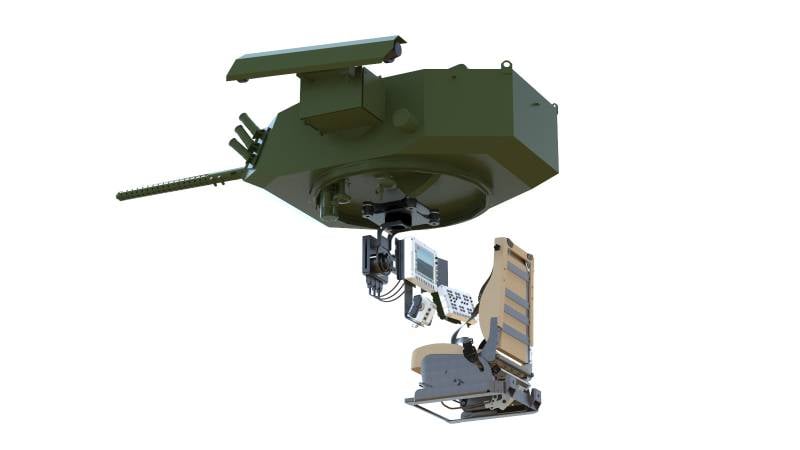 View from the bottom corner. The tower is closed at the bottom

In October last year, the first information appeared about the possible export of the Volia DBMS. Foreign media reported that Nova Tekhnologiya together with Techimpex offered these products to the armies of Egypt and Uganda. These countries have a large fleet of older types of armored vehicles and are interested in upgrading them. By installing new products “Will”, old armored vehicles could increase their combat characteristics.

No new messages have been received yet. Accordingly, there are no contracts for the export deliveries of combat modules. Whether they will appear in the future is unknown. Possible purchases of “Volya” for the Ukrainian army were not reported at all. Perhaps news of this kind will appear later.

It can be noted that in the proposed form of the product line “Will” have both pluses and minuses. The strong point is the presence of a whole family of products with different capabilities, but on a common basis. This gives the potential customer a choice, and the developer’s chances of getting an order grow. The declared technical features and characteristics are generally at the level of modern foreign samples, which is also important for entering the market. 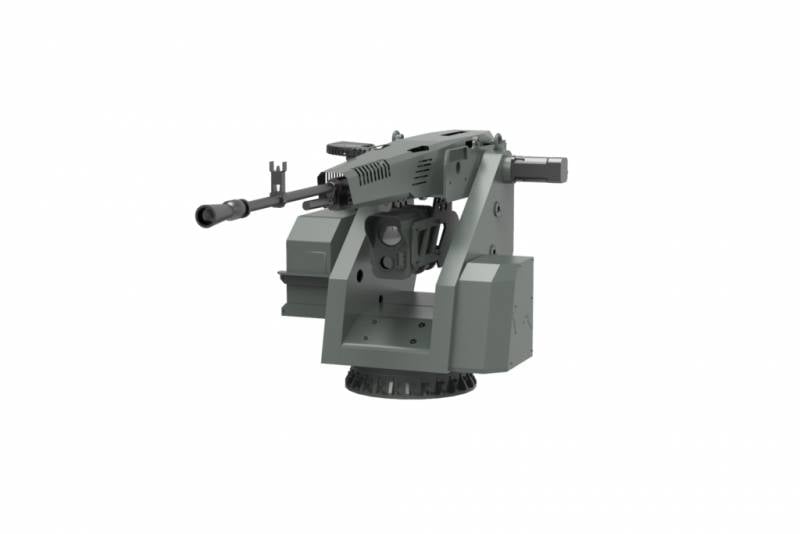 However, it must be remembered that there are already a lot of different DBMS on the international market, and each new sample faces stiff competition. To obtain foreign orders, you need to have the most serious advantages over competitors or some kind of leverage. As can be judged from the available data, the Volia family has neither one nor the other.

In terms of their technical appearance, Volia products are similar to the mass of foreign developments. At the same time, the issues of the quality of the hypothetical series, the correspondence of the real characteristics to the declared ones, etc. are relevant. Certain doubts may relate to both assembled modules and their individual components.

The most likely is a negative scenario for further developments. Most likely, “Volia”, “Volia-D” and “Volia-L” will not interest foreign buyers, or orders will be minimal. At the same time, the development company can still count on orders from the Ukrainian army and security agencies – but they will not be large, as has happened many times in the past.

In general, the “Volia” family of combat modules demonstrates the desire of the Ukrainian industry to create and sell new types of weapons and equipment. However, the current problems of the industry and the country as a whole, as well as the specifics of the international market, prevent the full implementation of such plans and the receipt of all the desired results. Therefore, three DUBM of the “Volia” line have every chance to replenish the list of modern Ukrainian developments that have not left the stage of development and testing.