In a few years, the Russian army may adopt the promising combat equipment of the serviceman (BEV) “Sotnik”. It will replace the current “Warrior” and will provide an increase in the combat capability of both individual soldiers and subunits as a whole. The Sotnik project is in its earliest stages, but the possible ways of its development are already known.

On the eve of development

For the first time, the topic of the new generation of BEV was raised several years ago. Thus, at the Army-2018 forum, Rostec State Corporation for the first time showed a mock-up sample of new equipment, which included a number of original components for various purposes. This version of the BEV included uniforms with a wide range of functions, protective equipment, an exoskeleton and new small arms. At that time, the layout was called “Ratnik-3”. Subsequently, the promising equipment received the designation “Sotnik”.

After the demonstration of the layout, various messages appeared regularly about the possible use of certain technologies and components in the project. Which of them will actually be used to create the BEV has not yet been specified. An interesting feature of such messages was the emphasis on the issues of uniforms and protection. Less attention has been paid to the topic of electronic components and weapons.

According to reports from previous years, development work on the “Sotnik” theme was supposed to start in 2020. Central Research Institute Tochmash was appointed as the lead contractor, as in the case of “Ratnik”. Also, the project was supposed to involve a lot of other organizations developing individual systems and components.

In the middle of last year, it was announced that by the beginning of 2021, the Ministry of Defense would form a technical assignment for a promising BEV. This will allow the transition from preliminary research to full-fledged development work. The R&D stage is expected to be completed in 2023. In 2025, it is planned to start deliveries of serial equipment to the troops. 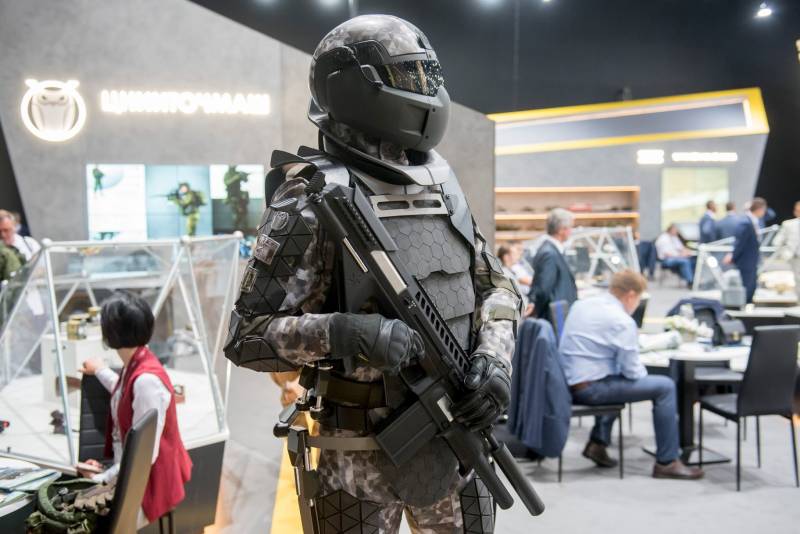 Recent reports have focused on the appearance of uniforms and related equipment from the Sotnik, as well as the technologies for their creation. A variety of solutions were proposed that could increase combat effectiveness and gain new opportunities.

For the first time in domestic practice, the issue of including an exoskeleton in the BEV is considered. Such a product should take on various loads and simplify the fighter’s work. The possibility of creating a passive type system was mentioned earlier. At the end of last year, Rostec spoke about the search for compact and efficient energy sources that would make it possible to create a motorized exoskeleton.

The new BEV should protect the soldier from bullets and shrapnel, and new technologies and materials are proposed to solve such problems. In mid-January it was reported that a woven material made of ultra-high molecular weight polyethylene fiber could be used in the manufacture of Sotnik. Such protection will reduce the risks of being hit by shrapnel, but will remain flexible and resilient. The outfit can be adjusted to fit the figure so that it does not hinder movement.

In addition to protection, a soldier’s jumpsuit can have other functions. With the help of additional layers or coatings, it is possible to provide camouflage from radar or thermal imaging surveillance equipment. Earlier “Ruselectronics” proposed to include in the new BEV elements from the so-called. electrochrome. The special material under the control of the electrical circuit is able to change color. Due to this, the camouflage of the equipment can be adapted to the current conditions in the shortest possible time – without the need to replace the equipment.

The equipment may include special energy-absorbing boots. Providing proper walking comfort, they will be able to extinguish the energy of the explosion and protect the fighter from mines. In combination with other protective equipment, such shoes will drastically reduce the risks to the soldier. 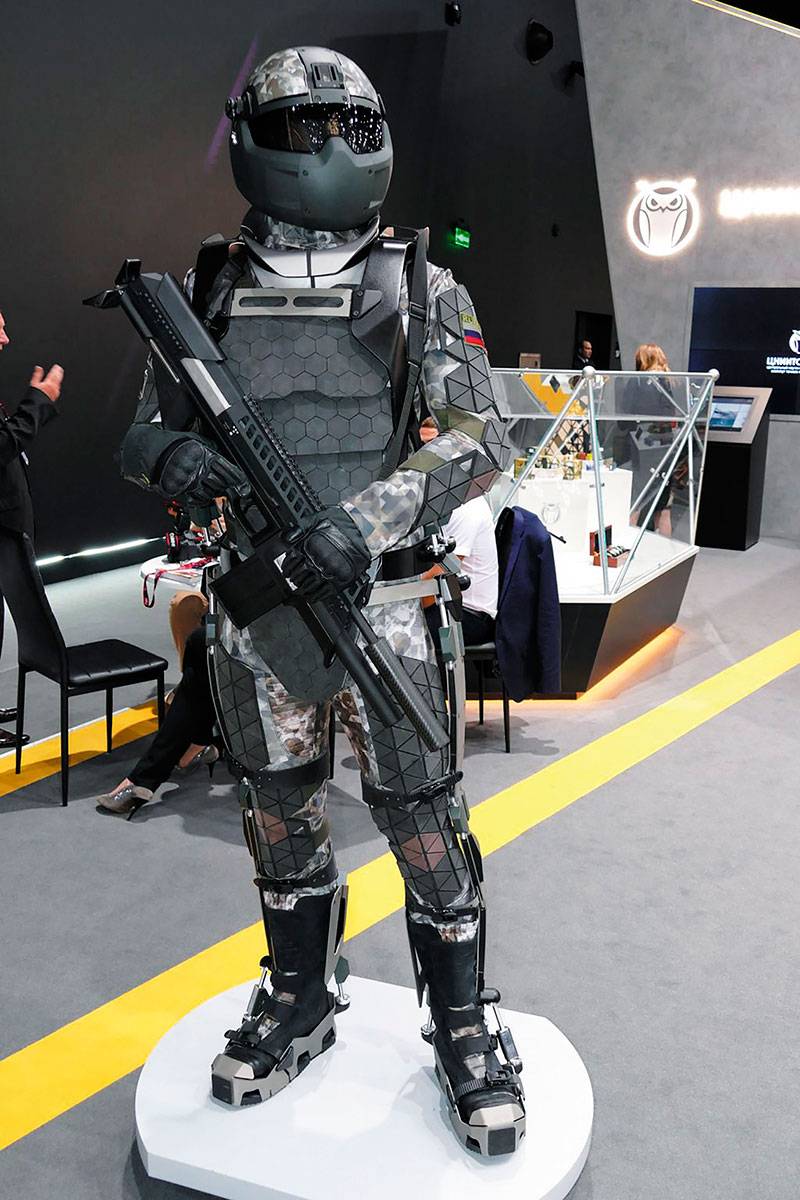 At Army-2018, a closed helmet was demonstrated as part of a mock BEV, which provides a high level of protection and is suitable for the introduction of various electronic components. In addition to voice communication, it can receive functions for displaying information on glass, incl. with augmented reality capabilities. Similar principles can be implemented in the form factor of glasses.

The model kit arr. In 2018, a certain unknown machine gun of a futuristic appearance entered. As it became known later, a new weapon could also be included in the composition of the real BEV “Sotnik”. At the end of 2019, the leadership of Rostec revealed plans to create a promising rifle complex, including both weapons and a new cartridge. However, details on this matter have not yet been given.

It is likely that the existing armament system of the rifle squad will be retained based on assault rifles with reinforcement from machine guns, sniper rifles, etc. At present, a number of new samples of these classes are being created in our country, but it has not yet been announced which of them will be included in the BEV “Sotnik”.

To expand the capabilities of the unit, incl. fire, the introduction of new means is proposed. So, light and ultralight unmanned aerial vehicles capable of performing reconnaissance and hitting targets can come at the disposal of the fighters.

The Sotnik equipment, like its predecessor, will have communications integrated into the tactical echelon command and control systems. The ability to exchange data in real time will simplify the interaction of departments and increase their overall efficiency. Electronic sights and helmet-mounted display systems will allow more fully exploit the potential of such integration.

Equipment of the future

According to last year’s news, by now the Ministry of Defense was supposed to form a technical assignment for a promising BEV, and organizations of the defense industry can begin to develop it. The detailed requirements of the army have not yet been disclosed. Development companies are also not ready to present finished products that fully comply with the terms of reference. 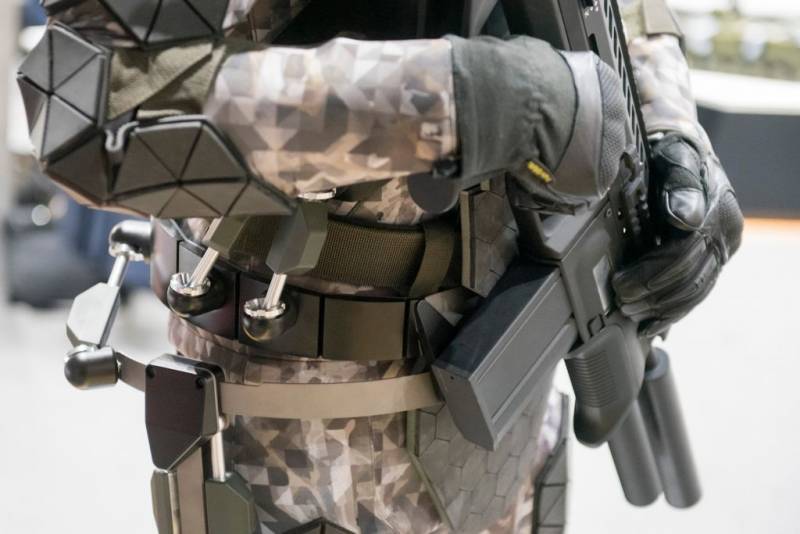 At the same time, over the past few years, the industry has regularly published its views on the further development of BEV and the technology required for it. It is very likely that these or those proposals, announced earlier, will find application in the real project “Sotnik” and will give certain advantages.

It should be noted that the proposed solutions and technologies, such as elastic protection, advanced personal electronics of a soldier, fundamentally new small arms, etc. can look not only forward-looking, but also overly daring. This will complicate the development of equipment, which can lead to increased costs and a shift in deadlines.

However, the complexity of the project is offset by a number of obvious benefits. First of all, promising technologies will ensure compliance with the current requirements both at the time the BEV entered service and in the distant future. In addition, new technologies are often not delayed in the military sphere and are being introduced in other directions. A number of ideas proposed for the “Sotnik” are of interest to the civil sphere as well.

It is curious that already now, having just begun the development of the Sotnik, the industry is working on the issues of creating the next generation of outfits. Ready-made samples of this kind will appear only in the thirties, when the “Sotnik” set will become widespread among the troops.

The appearance of the future equipment “Centurion” is still unknown, and, probably, has not yet been formed. At the same time, an important trend is evident. The Russian army is switching to an integrated method of forming soldiers’ equipment. This method has shown itself well in the Ratnik project, in the near future it will be developed in the Sotnik program, and in the future it will form the basis for the so far unnamed promising equipment. And in all cases, both the new method and modern components will positively affect the state and capabilities of the army.