The process of robotization of weapons is irreversible and develops in accordance with strict economic laws. Training of a military pilot has always been a costly and rather lengthy undertaking. The emergence of strategic and tactical UAVs has become an obvious solution to this problem with a bunch of bonuses – a long period of air duty, increased responsiveness and low radar visibility. Now, when even countries that have never shone on the battlefield are effectively using shock and reconnaissance drones, it is the turn of ground vehicles. One of the particular examples of such an evolution from heaven to earth was the American Robotic Combat Vehicle (RCV) program, aimed at developing a whole line of combat ground robots. 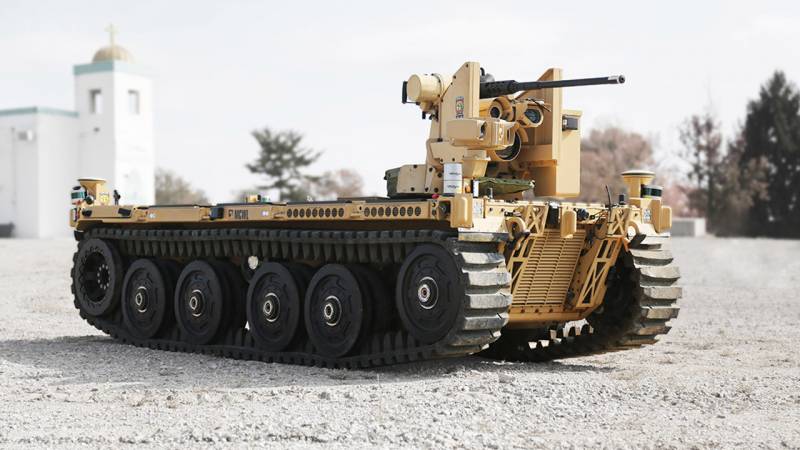 One of the early prototypes of the RCV-Light. Source: defpost.com

RCV-Light machines are in the lightest class of the family. Such remote-controlled robots should move on the external sling of a CH-47 helicopter and a V-22 tiltrotor. The tracked platform for light vehicles is used by the EMAV (Expeditionary Autonomous Modular Vehicle) from Pratt Miller. It can be called light rather conditionally – after all, the mass exceeds 3 tons. The platform perfectly plays the role of a truck and takes 3 200 kg on board. The maximum speed of the RCV-Light reaches 72 km / h on rough terrain. On a tracked vehicle, in addition to a machine-gun mount, a small reconnaissance quadcopter can be placed, seriously expanding the capabilities of the robot.

The analysis of the available images allows us to judge the rather high degree of elaboration of the design of the American novelty. First of all, these are several lidars (laser radars) located at the corners of the platform, which are part of the machine vision system. This indicates the possibility of semi-automatic operation of the robotic complex. For example, operators just need to set the route to the vehicle to the point of collision, and RCV-Light will carry out all further actions in autopilot mode. The remote operator can operate the Hover Fly Tethered Unmanned Aerial System, an airborne reconnaissance drone at this time. The copter is tied to the tracked vehicle (in the literal sense of the word) with a cord for control and power supply.

There is nothing surprising in the mini-tank autopilot system – similar technologies have long been used in the civilian automotive industry in the United States, Japan and Europe. Fully autonomous prototypes, hung with lidars, sonars and infrared cameras, have covered millions of kilometers around the world and are ready to become full-fledged participants in the movement. Everything rests on the legal framework and problems with responsibility for road accidents. In the army, such sentiments are not burdened, and the full automation of the movement of combat robots seems to be quite natural. By the way, KamAZ, which until recently worked in cooperation with the IT firm Cognitive Technologie, is engaged in projects of unmanned trucks in Russia. Given the proximity of the plant from Naberezhnye Chelny to the domestic military-industrial complex, one can be sure of using the obtained developments in the military sphere. 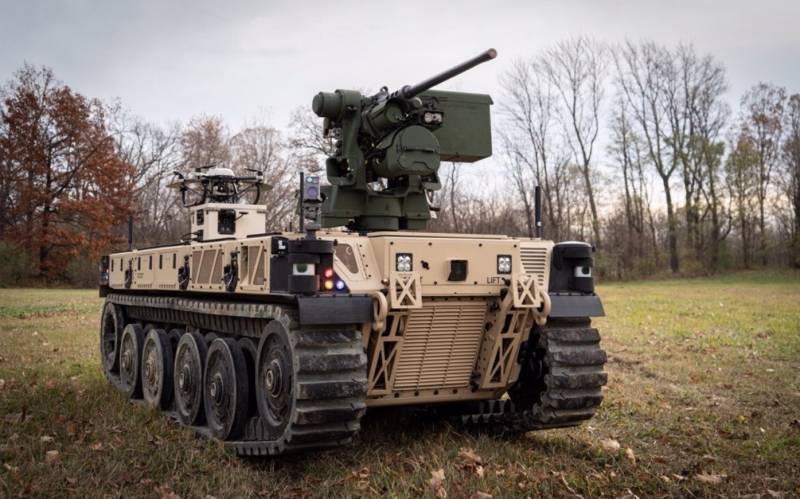 RCV-Light in one of the configurations with a quadcopter and a machine gun. Source: defbrief.com

The development of “electronic brains” of a light tracked robot is being carried out by the British QinetiQ, which has managed to get its hands on flying drones. In particular, the company’s engineers have created a solar-powered high-altitude pseudo-satellite Zephyr, which has set a record for the duration of the flight. Under current US law, a lightweight robot cannot open fire on its own – it still requires an operator. At the same time, the vehicle is able to independently search for and aim at the target of the Kongsberg CROWS-J combat module with a 127-mm M2 Browning machine gun. Optionally, the vehicle can be equipped with the anti-tank FGM-148 Javelin, which attacks the target on the “fire and forget” principle – this is great for an unmanned tank hunter.

Given the high saturation of the modern theater of military operations with reconnaissance and surveillance, the developers of RCV-Light reduced the robot’s signature as best they could. The hybrid propulsion system applied to the robot reduces machine noise and makes it virtually invisible in the infrared range. The internal combustion engine, as an integral part of any hybrid, is responsible for driving in “peaceful conditions”. Massive rubber tracks and rubberized rollers work to reduce noise. Despite all the tricks, the developers and future users are already saying that the car belongs to the category of consumables, and no one will regret such combat losses.

In line with the now fashionable network-centric wars, the RCV-Light tracked drone is part of a large unmanned system. The older brother, with whom the kid is related by the modular control architecture with an open system (MOSA), is the RCV-Medium mini-tank. In early 2020, a consortium of Textron, Howe & Howe and FLIR Systems won the Pentagon’s competition to develop a mid-range ground attack drone under the Robotic Combat Vehicle (RCV) program.

Four prototypes have already been built and are participating in joint tests with RCV-Light. The main requirement for the mass and dimensions of the middle-class robot was the ability to be transported in the holds of the transport C-130 Hercules. Based on this, the mass of prototypes can vary from 15 to 18 tons. Functionally, the vehicle will be much more dangerous than its younger brother – it has a 30-40 mm automatic cannon and several anti-tank missiles in its arsenal.

The heaviest tracked robot from the family is called the Robotic Combat Vehicle-Heavy (RCV-H) and it is supposed to fatten up to 30 tons, as well as equip the Armata killer weapon. The strategic mobility of the heavy vehicle will be provided by the C-17 Globemaster III. In many ways, it is this unmanned tank that will replace the classic “Abrams”. The Americans have already prioritized the combat use of such equipment – the light RCV-Light will go to the hottest spots first of all (not so sorry), then RCV-Medium will enter the battle and, finally, only against the highest priority targets will be sent “heavy” RCV- H. 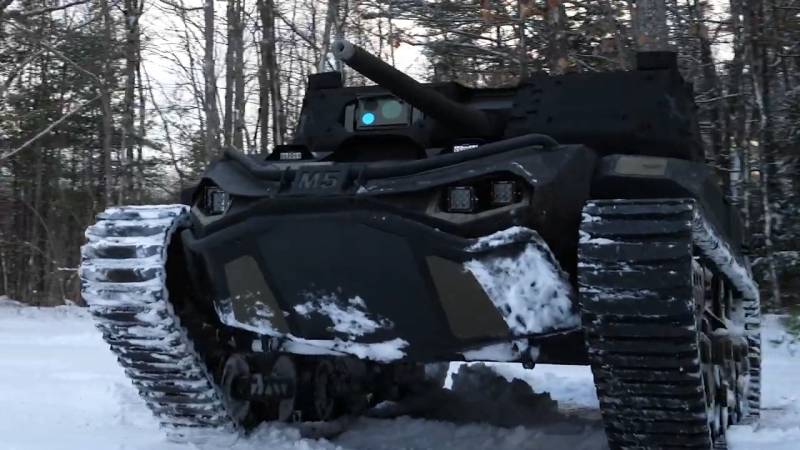 The developers, despite the development of a number of technologies, talk about the difficulties associated with teaching artificial intelligence to drive a car in combat and rough terrain. With flying drones, everything was much simpler – the number of external factors was several times less. But, given the interest of the Pentagon and the obvious lack of such equipment in the troops, the programmers intend to solve all the problems within two to three years.

The US Army is currently testing four RCV-Lights in conjunction with RCV-Medium vehicles. By the end of 2021, there are plans to conduct robotic maneuvers at the company level using 8-16 tracked drones of various classes. Putting into service, apparently, will take a lot of time – only by 2022 it is planned to equip experimental combat units with 16 vehicles for full-fledged field tests.

Today, Russia, which for a long time did not pay attention to flying and ground drones, is forced to scatter resources, making up for lost time in all areas. The priorities for development, of course, include attack UAVs and kamikaze drones, the absence of which could become an operational-tactical tragedy for the Russian army in the future. For example, Ukraine has expressed its readiness to continue purchasing Turkish Bayraktar TB2 and has already transferred some of the drones to Donbass.

Numerous videos of the destruction of manpower and equipment in Nagorno-Karabakh can tell how this can turn out for the militias and the regular army of the DPR.

The Ukrainians even intend to bypass possible sanctions related to the supply of foreign engines to Bayraktar and offer their counterparts.

In this situation, there is no reason to hope for the imminent appearance in the Russian army of tracked and wheeled robots (similar to the American ones) – they would have time to figure out their own flying drones.