A variant of the LongShot look from DARPA

DARPA launches a promising new program for the United States Air Force. To expand the combat capabilities of fighter aircraft, it is proposed to create a medium unmanned aerial vehicle capable of carrying guided air-to-air weapons. The program was named LongShot.

The modern concept of a fighter’s combat operation is quite simple. The aircraft must detect an air target or accept a third-party target designation, then go to the air-to-air missile launch line and fire. The results of such combat work directly depend on the probability of detecting a fighter by enemy air defense and on the missile’s flight range.

DARPA specialists propose a new concept of application, which is believed to be capable of increasing the basic combat capabilities of fighter aircraft, as well as reducing risks to humans. It is proposed to develop this concept within the framework of the new LongShot program. The official press release on the launch of the program was published on February 8th.

The new idea provides for the introduction of a new component into the aviation complex. The fighter should not carry missiles, but a special unmanned aerial vehicle, which is the carrier of the weapon. It is assumed that the manned aircraft will be able to launch the UAV from a safe distance, and the drone will go to the missile launch line – taking all the risks.

DARPA suggests that the LongShot program will change the very paradigm of air combat. The traditional way to increase the combat capabilities of fighters is to gradually improve certain characteristics. LongShot offers an alternative development path with great potential.

The agency launches the first phase of the program, which aims to conduct research and preliminary design. Phase 1 contracts were awarded to Northrop Grumman, General Atomics and Lockheed Martin. Soon Northrop-Grumman revealed its opinion on the new project and its significance. The cost of the work has not been reported.

DARPA and Northrop Grumman in their messages get along with general phrases, without technical details. At the same time, drawings were attached to the press releases of the two organizations showing the possible appearance of a promising UAV. It is unlikely that off-the-shelf drones will be the same, but at this point, even the illustrations available are of some interest. 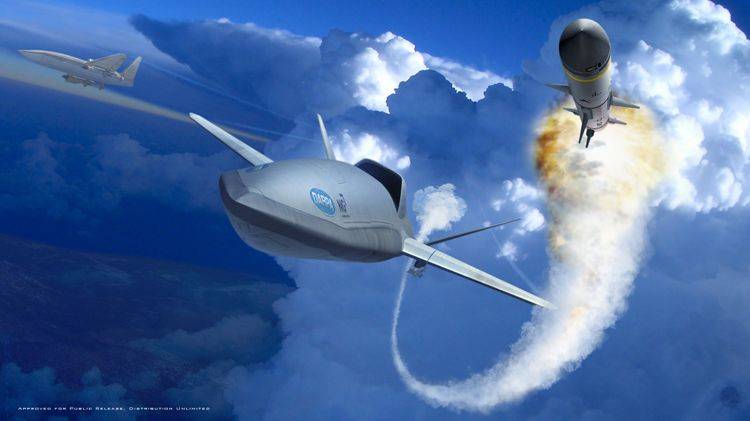 A drawing from DARPA depicts a tailless aircraft with distinctive fuselage contours and a folding wing. There are two bucket air intakes in the tail, which indicates the use of a turbojet engine. It also demonstrated the launch of two air-to-air missiles that look similar to the Lockheed Martin CUDA product. Before launch, the weapon was in the internal compartments.

Northrop Grumman showed another version of the “fantasy on the topic”. Their LongShot version is more like a normal aircraft with smooth fuselage contours, trapezoidal wings and V-shaped empennage. The power plant in the form of a turbojet engine receives one upper air intake. Two missiles are transported on pylons under the center section.

DARPA believes the new concept has a number of important advantages. A couple of them are given in the official message, but there are others. Indeed, with due elaboration of the project, a radical change in the combat capabilities of fighter aircraft is possible.

First of all, we are talking about the next version of the concept, providing for the interaction of a manned aircraft and a UAV. Research in this area has been going on for several years and is already yielding definite results. Now this concept is proposed to be used to improve the combat qualities of a fighter.

One of the main advantages of the new concept is the ability to increase the combat radius of the entire aviation complex. The launch line for air-to-air missiles is removed to a distance equivalent to the combat radius of the UAV. Due to this, it is possible to increase the zone of responsibility of fighters and air defense, as well as to exclude the entry of enemy weapons into the affected zone. However, it is not yet clear how the return of the UAV from the remote area to the base will be implemented.

LongShot is capable of launching a missile at a shorter distance from the target. This means that during the flight to the target, the rocket will lose less energy and will maintain a higher speed. This will leave the target less time for any reaction, and the likelihood of a successful hit will increase.

It is likely that the LongShot UAV will be made inconspicuous. This will allow the attack to be carried out with a lesser likelihood of its timely detection by the enemy. In addition, a stealth drone is able to dramatically improve the combat capabilities of 4th generation fighters, which are not distinguished by high stealth. 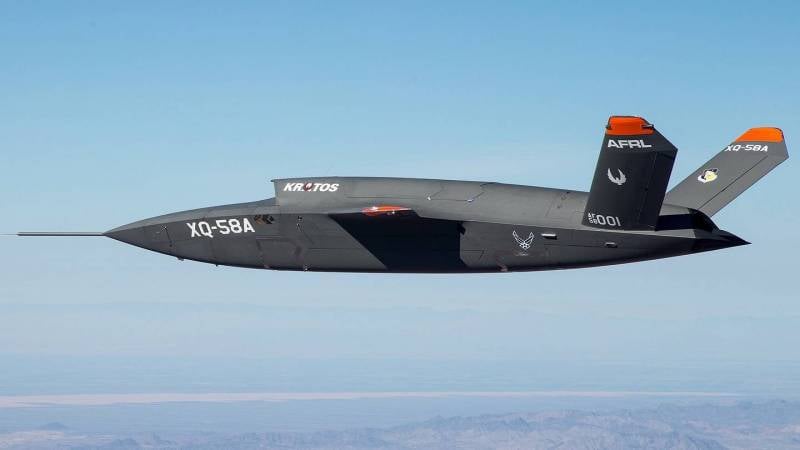 The experienced XQ-58Q from Kratos is one of the promising drones that can interact with aircraft. Photo by US AFRL

The rocket-carrier drone can be equipped with two-way communications. This will allow updating target designation or retargeting during its flight to the launch line. In addition, a UAV with external target designation will not unmask itself with radar radiation.

Fighters of various types, existing and promising, are considered as carriers for LongShot. However, in theory, such UAVs can be used by long-range bombers or even converted transport aircraft. A heavy aircraft with several drones in the cargo bay and under the wing will be able to replace an entire division of fighters. Such capabilities will be useful in a major armed conflict.

So far, the new DARPA program is only talking about expanding the capabilities of fighters. However, in theory, nothing prevents “teach” LongShot drones to carry “air-to-ground” weapons and strike at ground targets. In doing so, they will have the same benefits as in the original role. Similar ideas are already being worked out at the flight test level.

The new UAV will have to be developed taking into account rather strict restrictions on dimensions and weight. It will have to fit on the suspension of existing and future fighters and not interfere with flight. At the same time, high flight characteristics and acceptable carrying capacity are required from the device.

To fully assess the prospects of the LongShot program, it is necessary to know not only the general requirements, but also the specific characteristics. They have not yet been determined and will become known no earlier than the end of the first research phase of the program. At the same time, it is already clear that the development and production of new UAVs will significantly raise the cost of operating fighters.

It can be assumed that the development of a new project will not face serious problems. The organizations participating in the project, selected by the DARPA agency, have extensive experience in the field of unmanned aircraft and have all the required technologies. This allows us to optimistically assess the prospects for the entire program.

At the moment, the LongShot program is in its very early stages. Three contracts have been awarded for the work, probably on a competitive basis, and the contractors will have to conduct research and design in the coming years. Real results of work in the form of experimental equipment should be expected no earlier than 2022-23. With the approval of potential customers in the face of the Air Force and the Navy, further development of the project is possible, according to the results of which the rearmament of military aircraft will begin in the second half of the decade.

DARPA claims that the introduction of LongShot products will change the very concept of air combat. Such assessments do not seem overly bold, and they are sure to attract attention and cause a corresponding reaction. It is likely that other countries will have similar projects in the foreseeable future – and then the hypothetical air battle will change again.