In 1956, the US Navy entered service with the Douglas A3D Skywarrior, the first ever long-range strategic carrier-based bomber. This vehicle could deliver nuclear warheads over a range of thousands of kilometers and significantly expanded the combat capabilities of the fleet. In the future, such a successful air platform mastered new roles and set a number of records.

In the post-war period, the command of the US Navy worked out ways of further development of aircraft carriers and carrier-based aviation. So, in 1947-48. there was a proposal to build aircraft carriers with a displacement of more than 75-80 thousand tons and a flight deck of 330 m long, which made it possible to ensure the operation of jet aircraft with a large take-off weight. The result of such a project in 1949 was the laying of the ship USS United States (CVA-58).

In January 1948, the Navy requested the development of a promising long-range carrier-based bomber capable of carrying nuclear and conventional weapons weighing at least 10,000 pounds (about 4.5 tons). The maximum take-off weight of such a machine was limited to 100 thousand pounds – 45 tons. High demands were also made on flight technical and combat characteristics. The development program was indexed OS-111. Preliminary designs were expected by December 1948. 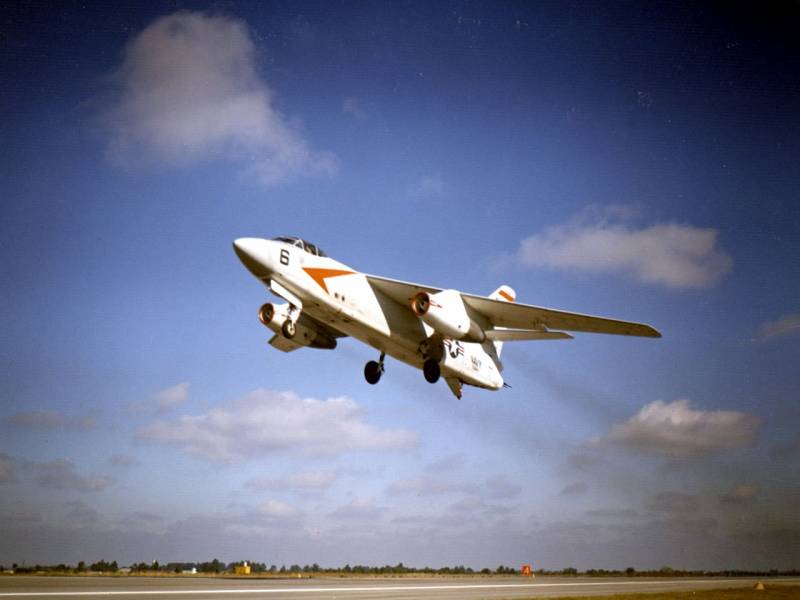 Takeoff from the airfield

14 leading US aircraft manufacturers have been invited to participate in OS-111. Six of them refused due to the heavy workload, and eight of the remaining showed interest. For one reason or another, only Douglas Aircraft provided documentation on time, and for two projects at once. Two of its factories have developed projects Model 593 and Model 1181, as well as several of their options.

In total, the Navy received 21 preliminary designs with various features. Experts examined them and selected the most successful ones. At the end of March 1949, Curtiss Wright received an order for the continuation of the work with 12 variants of the P-558 project and Douglas, which presented three versions of the 593 development. USD 810 thousand were allocated for the development of competitive projects.

Development of the Model 593 bomber was carried out at the Douglas plant in El Segundo under the leadership of Edward Henry Heinemann. In a short time, the design team was able to form an approximate appearance of the future aircraft, and then develop several intermediate projects with various features that developed the main ideas. Then they began the technical design of a full-fledged aircraft. 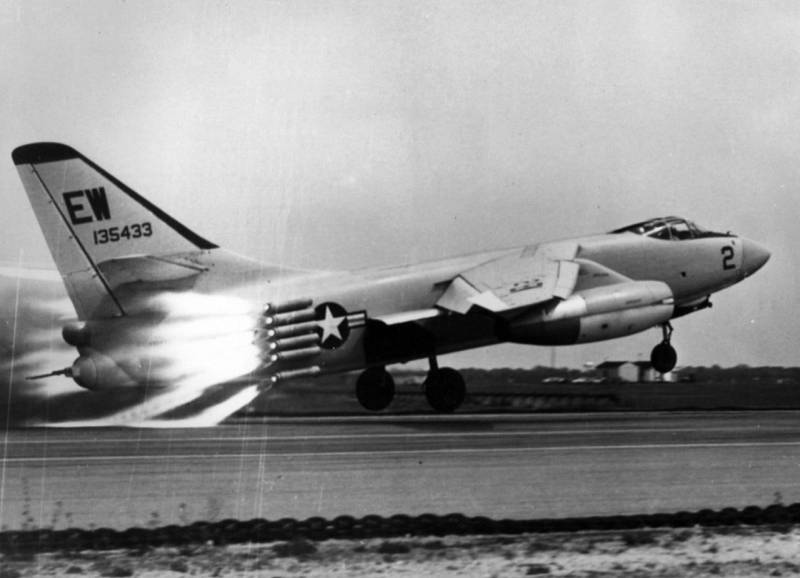 Already in the early stages, E. Heinemann made several important proposals. First of all, he doubted the possibility of building the United States aircraft carrier, so the carrier-based aircraft should have been made for smaller ships. Later, these doubts were confirmed – the construction of the aircraft carrier was stopped a few days after the laying.

In addition, the chief designer expected that lighter and more compact atomic bombs would be created in the near future – accordingly, the need for a large cargo compartment and a large carrying capacity, which complicates the project, disappeared. Also, it was necessary to work out several options for the power plant, in case of problems with the selected engine and taking into account the emergence of promising alternatives.

In 1949, the final version of the project appeared with the working designation Model 593-7. Throughout the development of the original project, the designers managed to maintain the take-off weight at the level of 30-32 tons – in contrast to competitors. In July of the same year, this was the decisive advantage in determining the winner of the competition. 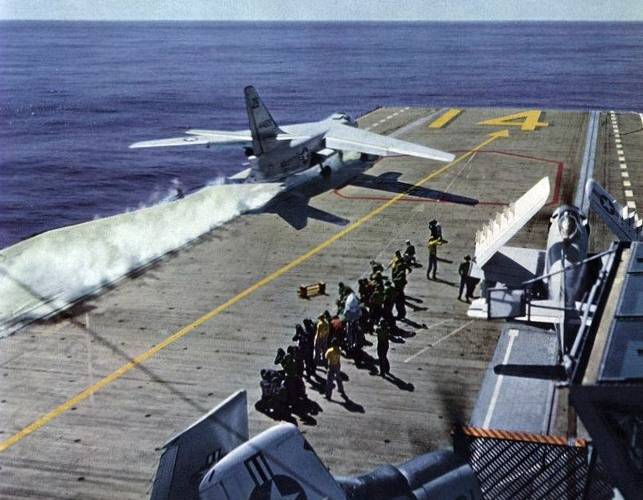 The XA3D-1 / “593-7” project proposed the construction of a high-wing aircraft with a swept wing and a traditional tail unit. The high aspect ratio fuselage accommodated the cockpit, instrument compartments, bulk cargo compartment, etc. To release the volumes inside the fuselage, the engines were carried into the underwing gondolas. The 36 ° swept wing was folded: the consoles turned upwards towards each other. The keel folded to the right, reducing the parking height.

The wingspan in the flight position was 22.1 m, the length of the aircraft was 23.3 m.The dry weight of the structure was kept at 17.9 tons, the normal takeoff weight reached 31.5 tons.The maximum take-off weight exceeded 37 tons, and as the project developed and the creation of new modifications was further increased. 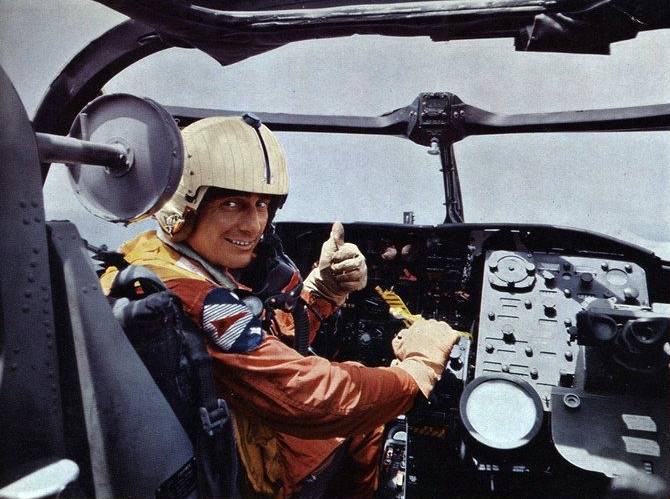 In the cockpit of the second modification

Initially, the XA3D-1 used a pair of Westinghouse J40 turbojet engines, but production vehicles were equipped with the more successful Pratt & Whitney J57s with a thrust of more than 5600 kgf each. During the tests, they made it possible to obtain a maximum speed of 980 km / h, a service ceiling of 12 km and a ferry range of 4670 km. The takeoff and landing characteristics were provided, which made it possible to operate from aircraft carriers of the Midway type.

The bomber’s crew consisted of three people. They were all in a common bow cockpit. The pilot and navigator sat side by side, with the weapons operator behind them. To reduce the takeoff weight, it was decided to abandon the ejection seats. Since the aircraft was supposed to fly mainly at high altitudes, it was proposed to use an emergency hatch instead of ejection.

The built-in self-defense armament consisted of two 20mm M3L automatic cannons on the stern mount. They were controlled remotely using a radar sight. The bomb bay was loaded with up to 5400 kg of bomb weapons – free-falling products of different types in different quantities or one special ammunition of the existing type. For the use of weapons, the AN / ASB-1A sighting system based on the radar was used.

The construction of prototype aircraft was noticeably delayed, and the first was submitted for testing only in September 1952. The aircraft was delivered to Edwards airbase, where testing began. A few weeks later, high-speed jogging began, and on October 28, the first flight took place. With its help, a number of shortcomings were revealed, the correction of which took a lot of time. The second flight was carried out only at the beginning of December. 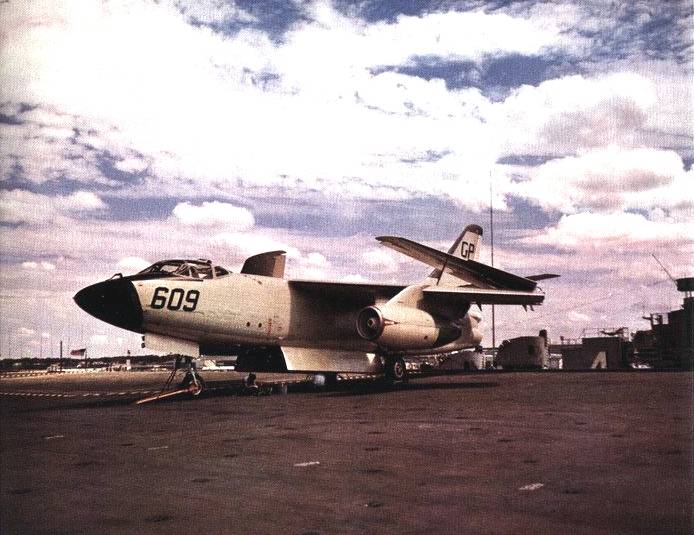 Based on the results of the first flights, the final decision was made to replace the experimental XJ40-WE-3 engines with a newer modification of the XJ40-WE-6. However, this did not help and even led to new problems. From March to August 1953, there was a ban on flights with unfinished XJ-40 engines, and tests of the XA3D-1 actually stopped. In the summer of next year, the problem was solved radically, replacing the failed engines with more advanced J57s.

Since October 1953, two experienced bombers took part in flight tests. Problems with all on-board systems were identified and fixed, engines and controls were adjusted. We also managed to get rid of hesitation when opening the bomb bay and hovering of dropped bombs. However, some shortcomings had to be corrected already at the stage of launching mass production.

The first order for a batch of 12 A3D-1 aircraft appeared at the beginning of 1951. By this time, the new bomber existed only on paper, and even before the start of the tests, more than a year and a half remained. Difficulties at the development and testing stage led to a gradual revision of the deadlines for the delivery of equipment.

The first batch of serial bombers was completed only by the middle of 1953, and by that time a second contract for 38 aircraft had been signed. Among other things, he provided for the finalization of the design, taking into account the test results. As a result, the aircraft of the second batch differed favorably from their predecessors and showed higher performance. Despite the differences, fifty aircraft of two batches formally belonged to the first modification of the A3D-1. They were later renamed A-3A.

In June 1956, the first production aircraft of the A3D-2 modification took off. It featured new J57 engines, a reinforced airframe, a number of new onboard systems, etc. For the first time, an in-flight refueling system appeared on an A3D aircraft. Later, as the A3D-2 was produced, other improvements were introduced. In particular, much attention was paid to the systematic development of a complex of radio-electronic means.

The production of A3D-1/2 bombers continued until 1961. For several years, 282 aircraft were built, the bulk of which was the technique of the second modification. The aircraft were transferred to a number of naval squadrons serving at different bases, incl. abroad. In the shortest possible time, they could fly to a given aircraft carrier and go to the place of performing combat missions.

In 1961, the US Navy entered service with the latest UGM-27 Polaris submarine ballistic missile. Such a delivery vehicle had obvious advantages over a long-range bomber, which led to natural results. By 1964, the A3D-1, by that time renamed A-3B, ceased to be a full-fledged part of the strategic nuclear forces. Now he was considered only as a carrier of conventional weapons. 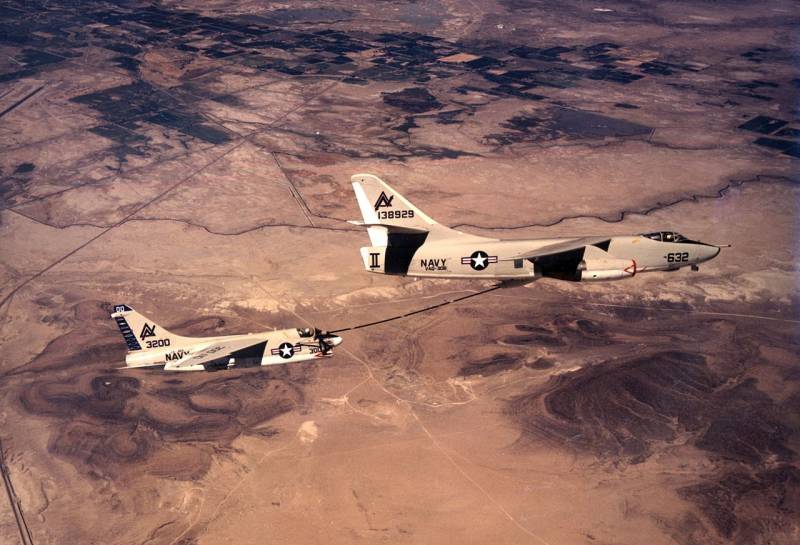 Already in the fifties, at the suggestion of the Navy, the Douglas company began the study of a tanker aircraft based on a long-range bomber. Since 1956, flight tests have been carried out on various options for refueling equipment. At first, the “tube-cone” system was used, but later on they switched to a soft hose with a cone at the end. In addition, an additional tank for 4.6 thousand liters of fuel was placed in the cargo compartment.

A tanker named KA-3B entered service. The first machines of this type were serial bombers, completed according to a new project. Then the tankers were made only by re-equipping combat aircraft. 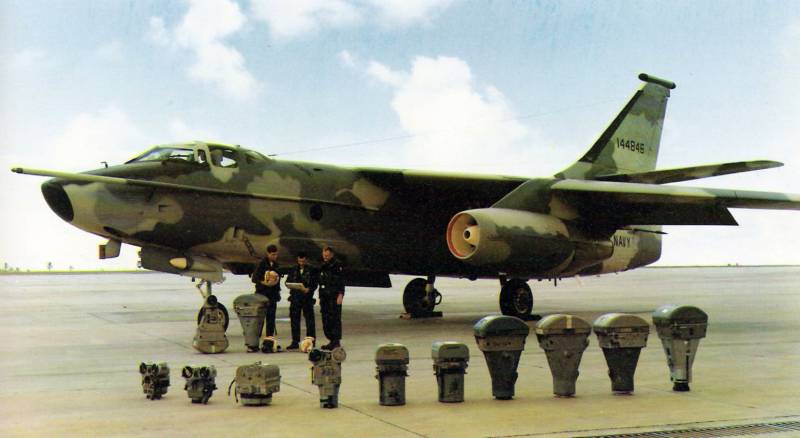 Beginning in the sixties, several A-3Bs were handed over to various aircraft building and research organizations, which used them as a research platform. Such flying laboratories ensured the creation of a number of promising combat aircraft.

Despite losing its strategic bomber role, the A-3B continued to serve. In particular, such aircraft were actively used during the Vietnam War for reconnaissance and bombing. Later, due to moral and physical obsolescence, they began to be written off. The last EA-3B scouts continued to serve until the early nineties and even took part in Desert Storm. The last flying laboratory A-3B was decommissioned only in 2011. Most of the equipment went for recycling, but two dozen machines were kept in museums.

The 38-ton Douglas A3D-1 / A-3B Skywarrior became the first American deck-based strategic bomber. In the future, this direction received limited development, but the new aircraft did not surpass the A-3B in size and weight. In addition, this aircraft in various modifications remained in service for 35 years, which sets it apart from other US Navy equipment. Thus, the “Heavenly Warrior” set a number of records, some of which have not yet been broken – and, probably, will remain intact.