UDC “Tokto” accompanied by small craft. Photo of the Ministry of Defense of the Republic of Kazakhstan

The naval forces of the Republic of Korea have a fairly large amphibious force, in which, however, so far there is only one universal amphibious assault ship with broad capabilities. UDC Dokdo (LPH-6111) of the project began LPX / “Tokto” service in 2005, and the second ship of this type will be handed over only this year. Earlier it was planned to build a third one, but it was abandoned in favor of a ship of a different class.

The principal decision on the development and construction of its own UDC of a new type was made by the command of the South Korean Navy in the late nineties. The result of this was the launch of the program with the LPX cipher. The work began with the study of our own and foreign experience in the operation of landing ships of various types, after which they began to formulate the terms of reference for a promising UDC.

Several South Korean and foreign organizations participated in the development of the technical documentation. Hanjin Heavy Industries & Constructions (Busan) was chosen as the lead contractor, who then had to carry out the construction. American specialists made a significant contribution to the project. This explains a certain technical similarity with the US Navy landing ships. 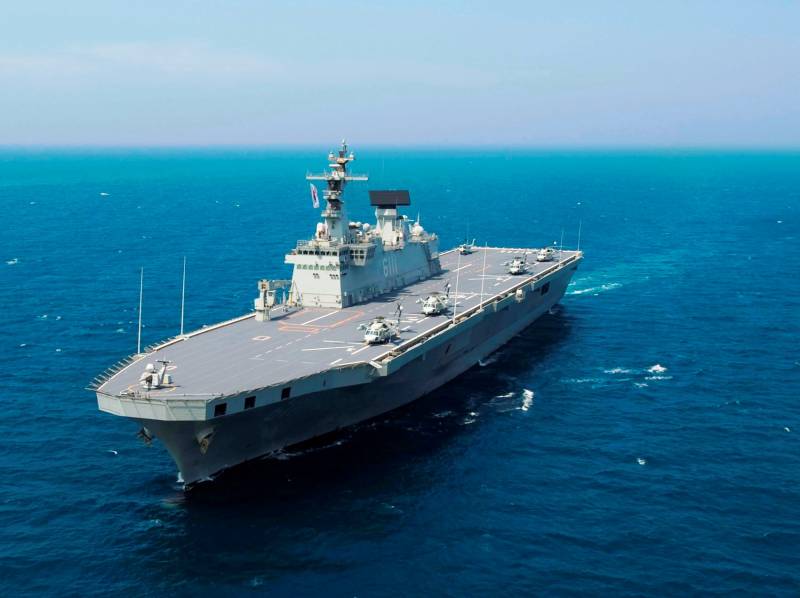 In 2002, the design was completed and the project was approved by the customer. At the end of October, the Department of Defense Procurement Programs of the Ministry of Defense signed a contract for the construction of the head UDC with an option for two serial ones. The first ship of the new series was named “Dokdo” – in honor of the island in the Sea of ​​Japan, which is the cause of disputes between South Korea and Japan. The cost of the ship, taking into account the design work, was determined at USD 650 million.

By this time, preparatory work had begun at the Khanjin shipyard, and soon the first UDC LPX was laid. A characteristic feature of the project was the widespread use of “civilian” shipbuilding technologies. Due to this, it was possible to build a fairly large ship in the shortest possible time and without additional difficulties. On July 12, 2005, the head “Tokto” was launched and, after completion, was taken out for sea trials.

Various inspections continued until mid-2007.On July 3, the customer signed an acceptance certificate, and the UDC was included in the Navy. In December of the same year, “Dokdo” became a participant in the Malaysian exhibition LIMA-2007 – this was the first public event with the participation of the first South Korean UDC. By the beginning of 2008, the ship had reached full operational readiness and became a full-fledged combat unit.

The plans for 2002 envisaged the construction of three LPX type UDCs, and the second was to be commissioned no later than 2010. However, during the 2000s, they had to be revised several times. Due to a lack of funding, the launch of the construction of the second ship was postponed several times. In addition, before the laying of the new ship, it was decided to gain experience in operating the lead ship – and, taking it into account, change the project. 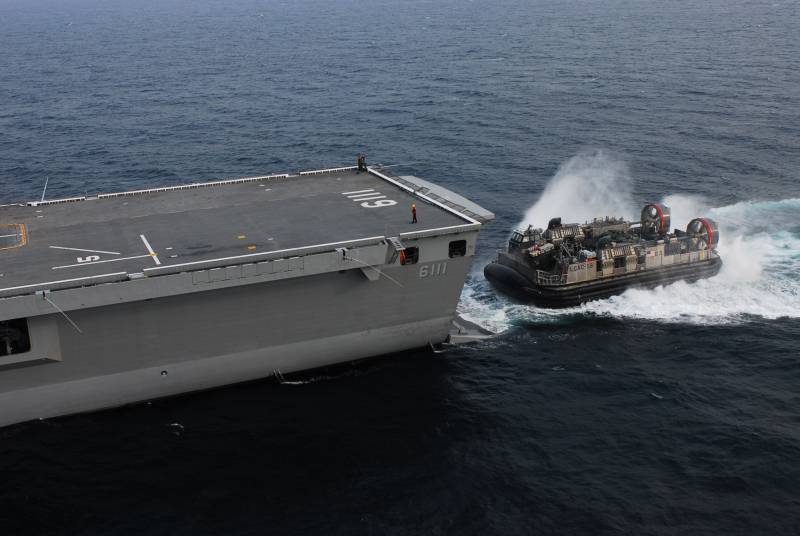 The building permit for the second LPX was received in October 2010, but after that there were problems and delays of various kinds. Only at the end of 2014, the Office of Military Procurement placed an official order for the revision of the project, followed by the construction of the ship. The contract value was $ 360 million. The design work was carried out at the Khanjin firm and continued until March 2016.

In the fall of 2016, Hanjin Heavy Industries & Constructions began cutting metal and assembling the structures of the future ship. The official groundbreaking ceremony took place on 28 April 2017. The second ship in the series was named “Marado” and tactical number LPH-6112.

Due to the competent organization of work and the improvement of technologies, the bulk of the construction was completed in the shortest possible time. Already on May 14, 2018, the ship was launched and sent for completion at the wall. In the same year, “Marado” entered the test, which continues to this day. According to current plans, all necessary checks and other activities will be completed as soon as possible. The ship is going to be delivered by the end of 2020. Accordingly, full operational readiness will be achieved in the first months of 2021.

It was originally planned that the third UDC of the new series will be built according to the original LPX project or according to its modified version. Such a ship could become part of the Navy no later than 2025, increasing the amphibious capabilities of the fleet. However, in 2019 new plans were announced. Now it was proposed to develop a completely new LPX-II project with different characteristics and capabilities. 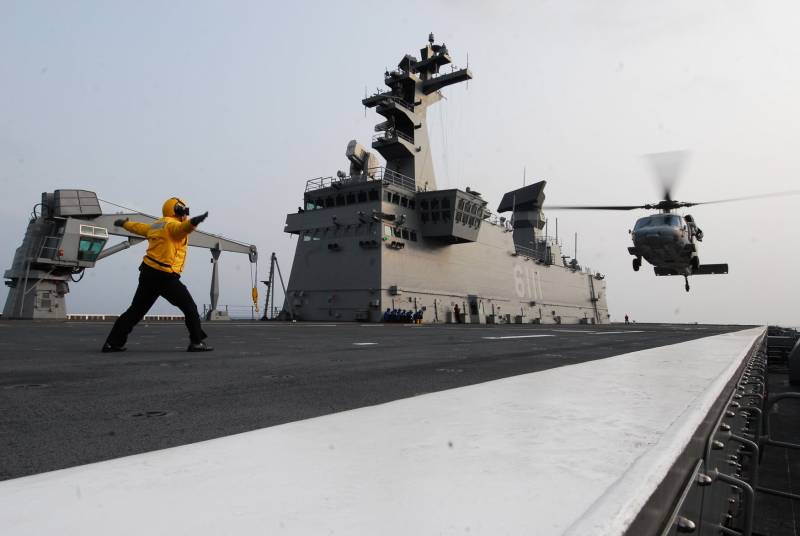 Flights from the deck of the ship. Photo Wikimedia Commons

A few months ago it became known that the Navy is temporarily abandoning the development of the direction of universal amphibious ships. Instead of LPX-II, a light aircraft carrier will be developed and built without the possibility of transporting and landing troops. A ship of this class was considered a higher priority and useful for the Navy.

According to recent reports, work on the LPX-II is currently at the stage of formulating the terms of reference. The design will start in the near future and be completed by the middle of the decade. The first South Korean aircraft carrier will be able to begin service in 10-12 years. At the same time, it cannot be ruled out that plans for the construction of ships will be revised again, incl. with the abandonment of the aircraft carrier and the return to the UDC.

The versatile landing ship Dokdo (LPH-6111) has a length of 199 m and a maximum width of 31 m. The total displacement is 18.8 thousand tons. A large flight deck was organized to receive helicopters. In the lower part of the hull there is a hangar deck for transporting various equipment or cargo; behind it there is a docking camera, which provides the exit of the floating craft outside. 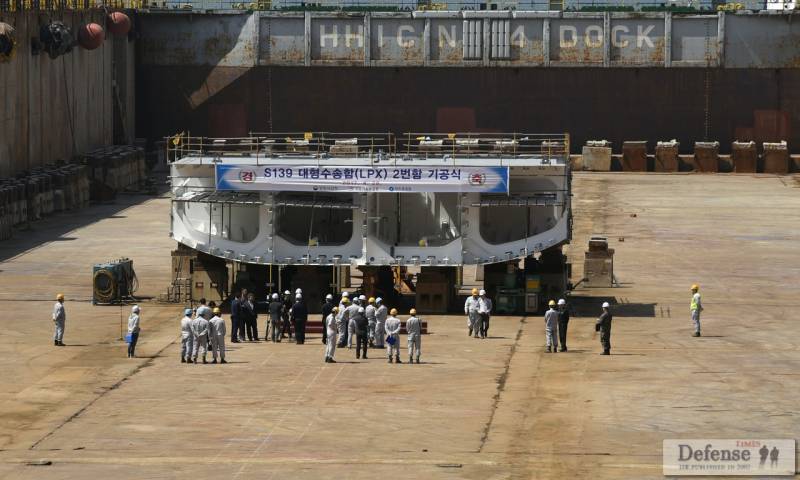 The main power plant of the CODAD type includes four SA16 RS2.5 STC diesel engines with a total capacity of 41.6 thousand hp. In the main modes, two motors are used, two more are connected to accelerate to maximum speed. Power is delivered to two adjustable pitch propellers. The control over the operation of the power plant is carried out by an automated digital system. The cruising speed of the ship is 18 knots, with a maximum speed of 23 knots.

The Dokto ship carries various electronic weapons that provide navigation, incl. in the coastal zone, the search for dangerous objects and the use of weapons. For self-defense, the RAM anti-aircraft complex with RIM-116B missiles was originally used; it is planned to be replaced with a South Korean-made K-SAAM system. There are also two Goalkeeper artillery mounts.

Inside the UDC hull, there are cockpits for the landing and a hangar deck for its equipment. The ship can take on board up to 720 marines, as well as dozens of vehicles for various purposes, including tanks. The delivery of the landing force to the shore is provided by two LCAC hovercraft or other landing craft carried in a docking chamber. Amphibious vehicles are parachuted on their own.

Up to 12-15 helicopters of various types are based on the deck. Now at “Tokto” the UH-60 and UH-1H machines are in operation. Experiments were carried out with the landing and takeoff of other aircraft. An update of the aviation group is planned for the future. 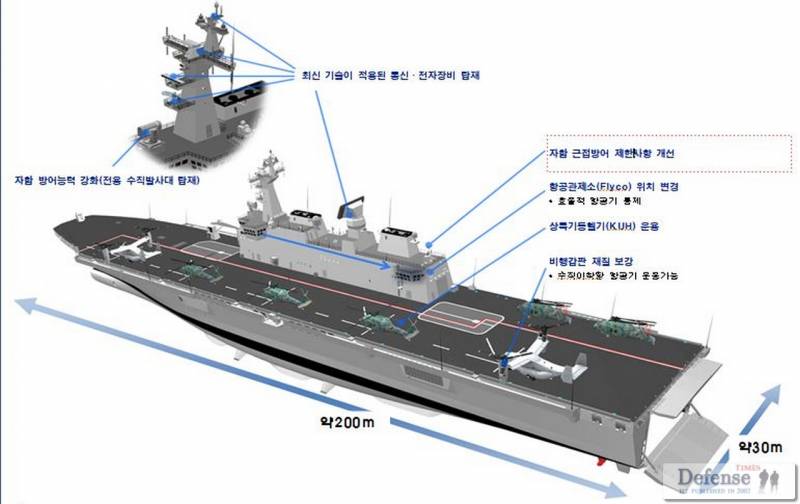 features of the appearance of the ship “Marado”. Graphics Defensetimes.kr

The second ship of the series, “Marado”, was built according to the updated project. Due to new technologies and solutions, the main technical, combat and operational characteristics have been improved. It was reported to replace the CODAD power plant with CODAG, which includes gas turbine engines. Electronic weapons have been updated, and the crew’s service conditions have been improved. The possibility of receiving V-22 convertiplanes and modern helicopters is provided. The hangar deck and dock camera have not changed in general.

The South Korean program for the construction of universal amphibious ships is of great interest, and not only technical. It is very curious how plans have changed over time, and how the real results differ from the original desires. At the beginning of the 2000s, the Republic of Korea Navy wanted to receive three ships over the next 15-17 years, but now we are talking only about two UDCs exceeding the original terms.

Nevertheless, the plans were partially fulfilled, which led to a significant increase in the amphibious forces of the fleet. At the same time, having received one UDC and completing the construction of the second, the South Korean Navy decided to abandon the third in favor of a full-fledged aircraft carrier. How correct this decision was will become known only in the future. In the meantime, the main task is to complete the tests and the adoption of the newest amphibious assault “Marado” into the fleet.