In case of a full-scale conflict, incl. with nuclear missile strikes, developed countries have specialized air command posts for the highest political and military leadership. The US Air Force has been in service with four Boeing E-4A / B doomsday planes since the early seventies. Despite their considerable age, they still remain an important element of national security.

At the height of the Cold War, the United States developed and built several types of air command posts (VCP) with different missions. In 1965, the VKP EC-135J NEACP (National Emergency Airborne Command Post), intended for the country’s top leadership, entered service, but already in the early seventies it was decided to replace it with a newer and more advanced machine. 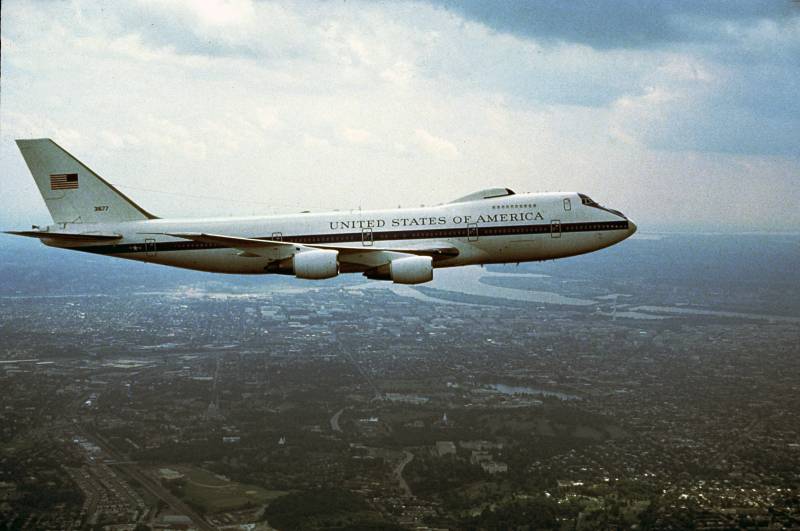 In February 1973, Boeing and a number of avionics manufacturers received an order from the Pentagon to create a 481B NEACP aircraft, later designated the E-4A. It was proposed to be made on the basis of the Boeing 747-200 wide-body airliner. The equipment from the older EC-135J was to be placed on board the VKP. The resulting command post retained the required capabilities, but surpassed its predecessor in flight data.

The first order provided for the construction of two VKP E-4A, then new orders appeared. By the fall of 1973, it was planned to take into operation six machines, one more was intended for testing. However, in the end, only four VKPs were ordered, and the latter was supposed to be built according to the updated project E-4B. It could be distinguished from the “A” aircraft by the distinctive radio antenna cover on the top of the fuselage.

The first of the future E-4A took off in July 1973. Already in 1974 it was put on duty. The construction of the following machines was delayed and was completed only in 1978. A year later, the fourth VKP, made according to the new project E-4B, was handed over. 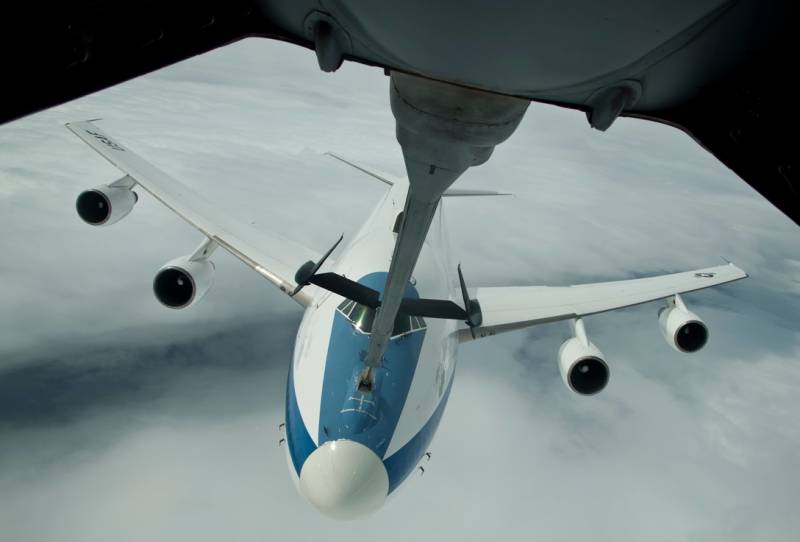 Refueling in flight, view from the tanker

Curiously, the E-4A / B project turned out to be the most expensive in the history of the US Air Force. The average cost of one car reached $ 250 million – more than 1.3 billion at current prices. This record was broken only at the end of the next decade with the advent of the B-2A bomber.

In the early eighties, the equipment was sent for repair and modernization. After these procedures, all aircraft returned in Type B configuration. In 1994, the aircraft received a new designation NAOC (National Airborne Operations Center). In addition, they received the unofficial nickname Nightwatch (“Night Watch” – in honor of the famous painting by Rembrandt).

The E-4B is built on the basis of the serial Boeing 747-200 and retains its main units, although the airframe had to be altered during re-equipment. Also, the power plant and a number of general aircraft systems were replaced. As a result, in terms of its flight performance, the E-4B is close to the base machine. An important difference in this context is the availability of in-flight refueling equipment. Thanks to her, the E-4B can stay in the air for up to 7 days, and this period is limited mainly by the reserves of resources for the crew. 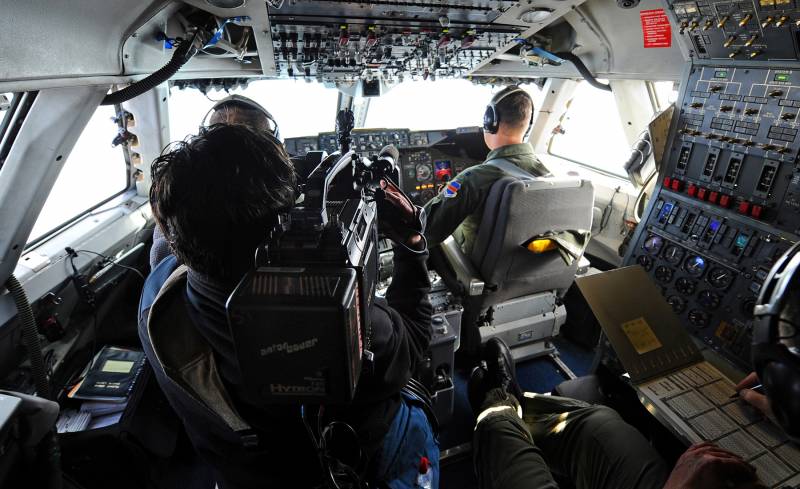 The E-4B retained its three-deck fuselage layout. The upper one is given to flight crews; it contains a cabin and cabins for rest. On the site of the main passenger compartment “747-200”, there is a kitchen compartment, a salon for top officials of the state with all the necessary equipment, a conference hall and a meeting room, a communications compartment and operator stations. In the tail there are premises for the rest of the duty shifts. The lower deck is dedicated to accommodating a variety of equipment and individual work areas.

According to known data, the E-4B aircraft carry a full range of electronic equipment to control the armed forces and are adapted to work in the most difficult conditions. In particular, avionics is still based on “old” components and devices, since modern “glass cockpits” are less resistant to the damaging factors of a nuclear explosion and other threats. Other measures have been taken to improve survivability and ensure the safety of the crew and passengers. 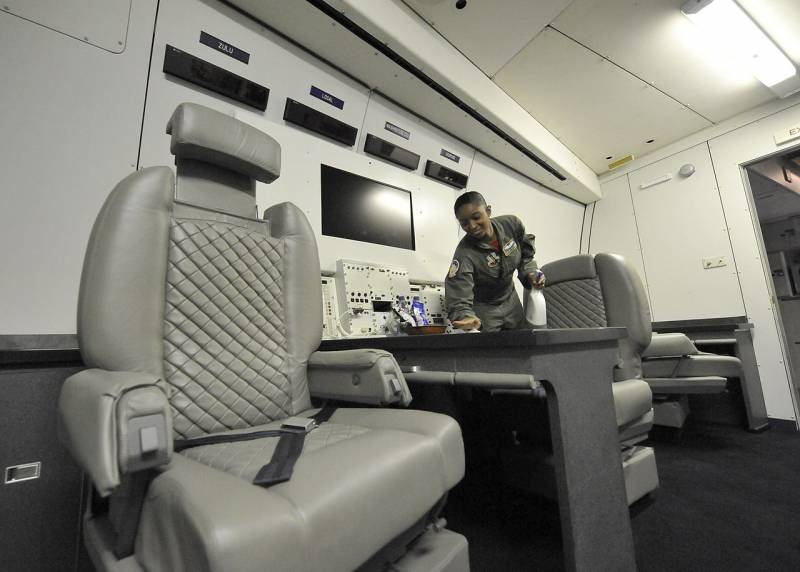 One of the salons for dignitaries

Special equipment provides communication and reception of data from all sources in the US and NATO armed forces, as well as processing of incoming information with subsequent issuance to command. Then the generation and transmission of commands to formations and units is carried out. Special attention is paid to communications and control of strategic nuclear forces. In particular, an 8 km long manufactured antenna is provided for interaction with submarines. To solve communication problems and data processing on board the “Night Watch” there are 29 automated workstations used by staff officers.

Depending on the tasks assigned, the E-4B can take on board from 60 to 100 people – the flight crew, technical personnel, headquarters and high command. Sufficiently comfortable conditions are provided for the crew and passengers. A long stay in the air is possible with the provision of rest and food.

The first VKP E-4A took over duty in 1974, and soon new ones joined it. By the beginning of the eighties, the work of the command could provide three machines of version “A” and one “B”. Soon, this deunification was corrected by modernizing older aircraft. 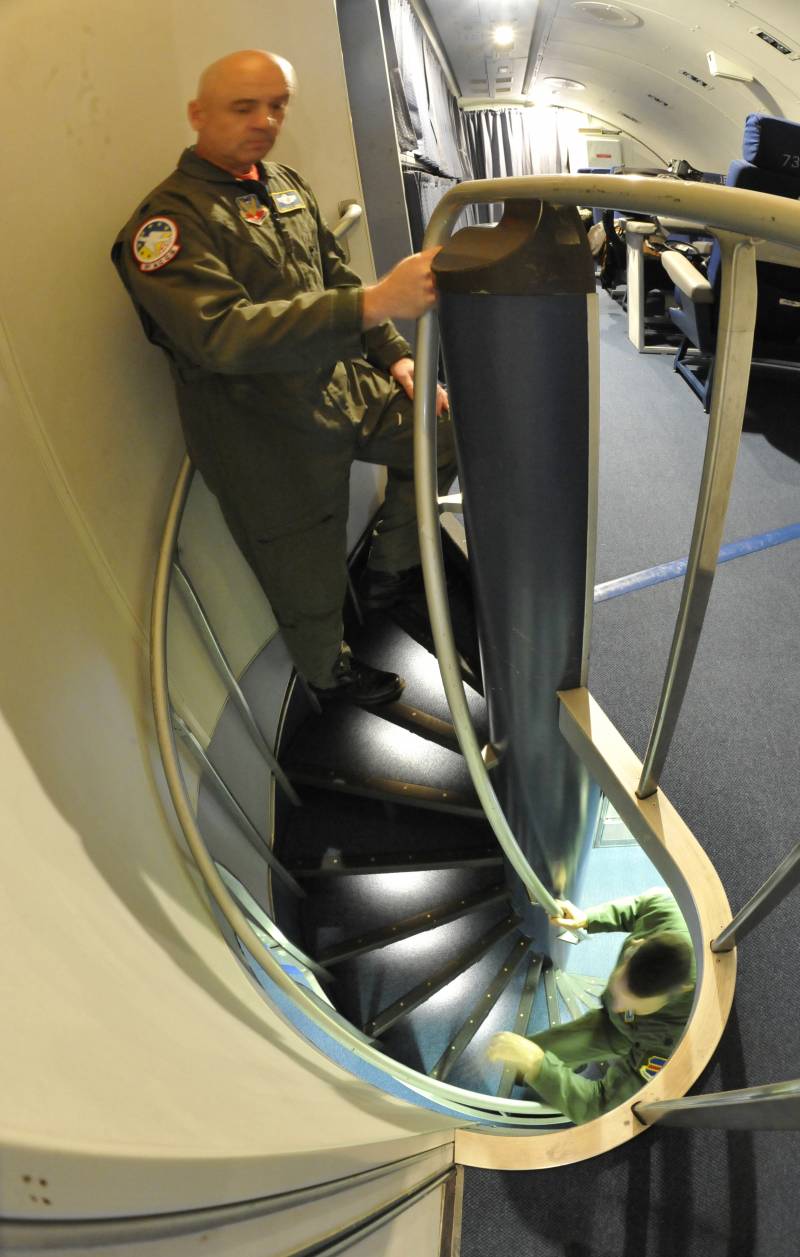 NEACP / NAOC aircraft were on duty at various air bases. One of them was constantly present at the Andrews airfield (Camp Springs, Maryland), in the immediate vicinity of the main military and civilian centers of the United States – 10 km from Washington. According to the state, one of the VKP had to be in full readiness awaiting an order to take off. Immediately after the arrival of the dignitaries, it was possible to take off. This procedure was maintained until 1994.

Also, E-4B, along with other special flights, participate in foreign trips of the country’s leadership. Thanks to this, the president or the minister of defense can take a seat on the All-Union Communist Party at any time and make strategic decisions. In addition, the use of the NAOC as a vehicle for the leadership of the Ministry of Defense simplifies the management of the armed forces.

Since 1994, E-4B aircraft can be used as temporary command posts in civilian areas. The aircraft can arrive in the area of ​​natural disaster or other disaster and perform control functions until a full-fledged ground command post is deployed. However, such opportunities were used only a few times.

It’s not over yet

Boeing E-4B aircraft are quite old, and even constant repairs do not allow them to continue to operate forever. At the beginning of 2006, the US Department of Defense announced its intention to write off the obsolete aircraft and replace them with new ones, until 2009. However, in February 2007, the plans were reduced, and now only one was subject to scrapping. 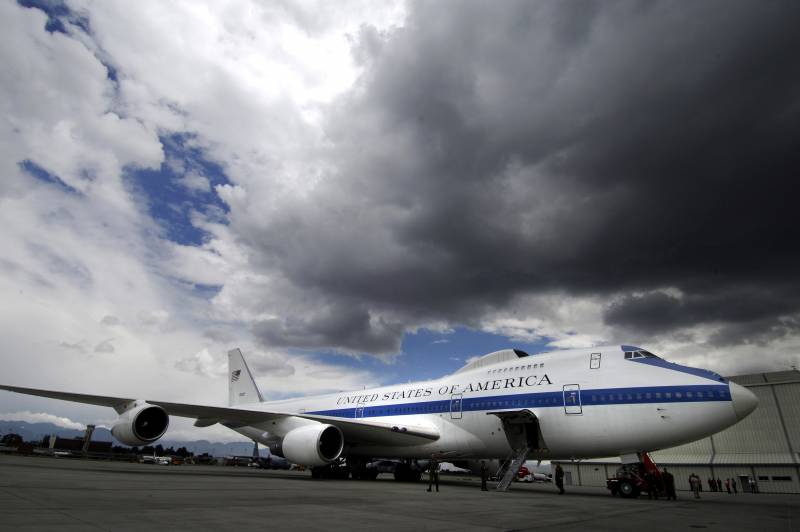 E-4B at Bogota airport during a visit by a US leadership delegation, October 2007.

Finally, in May 2007, the new Secretary of Defense ordered the E-4B to remain in service. The reasons for this decision were simple and clear: none of the new VKP can perform all the same functions as the “Night Watch”. In the future, the topic of writing off the E-4B was not raised. The operation of such equipment continues to this day and will not stop in the near future.

According to known data, the technical condition and regular maintenance allow the continued operation of the E-4B without any restrictions. After 2020-22 some minor restrictions are possible. The resource of the gliders will be enough for active operation for another 12-15 years.

In 2015, work began on the modernization of aircraft. According to open data, the complex of communications was supplemented with modern systems. Due to this, new communication opportunities are provided, increased resistance to various influences, etc. 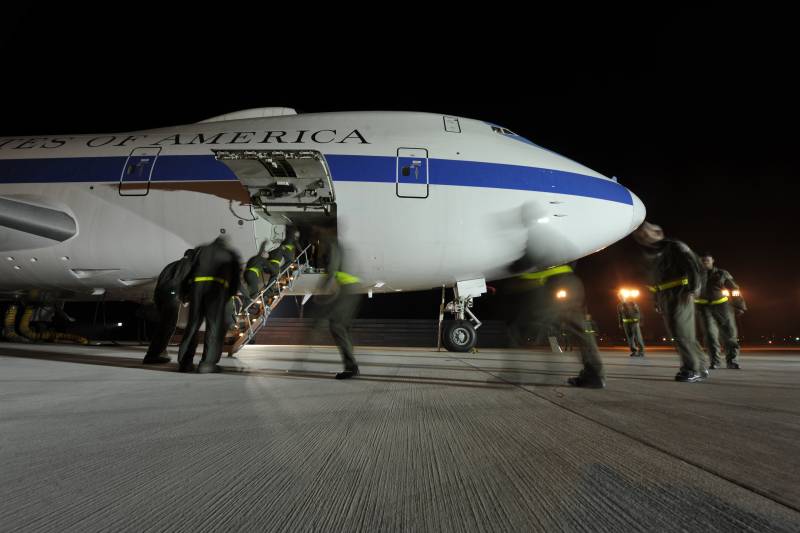 One minute before take off

A key element of defense

The E-4A / B air command posts were created at the height of the Cold War, taking into account the main threats of the time. In the face of the risk of an exchange of nuclear missile strikes, the armed forces of the opposing states needed a reliable and stable system of command and control of the armies, incl. SNF. The response to this was the emergence of various specialized complexes, systems and models of equipment – one of them was the American VKP E-4A / B. Subsequently, the situation in the world changed, but the air command posts remained in service.

Almost half a century has passed since the start of the NEACP / NAOC aircraft, but they still retain their place in the US Air Force – thanks to the unique capabilities and the virtual lack of alternatives. E-4Bs remain an essential element of the strategic command and control systems of the US armed forces, and their replacement is not yet even foreseen.