Here it is: Lebman’s gun for gangsters!

“After the shootout, you sent them leggings. With blood.
– I cut myself while shaving.
– Did you shave with leggings?
– I sleep in leggings!
“There are only girls in jazz”

Weapons and firms. In the recently published on “VO” material “From Mauser Schnellfeuer and PASAM submachine gun to Norlite USK-G Standard” it was told about an attempt to turn a good old Mauser into a submachine gun, and the modern popular “Glock” – into a carbine. The topic aroused the interest of the readership and will continue today. Continued with a story about attempts to turn some other, and very famous, samples of pistols into submachine guns. 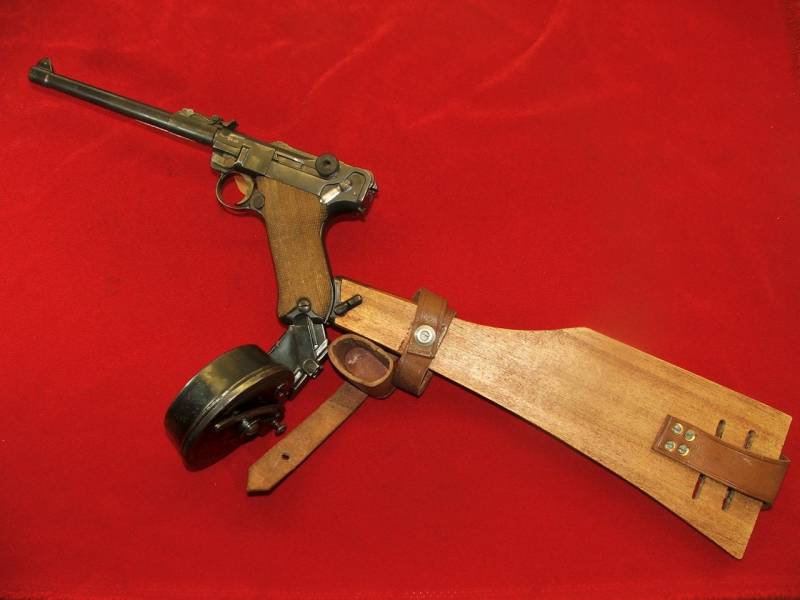 “Parabellum” with a snail magazine and a holster-butt

It is interesting that the beginning of such attempts was laid by the First World War. In 1914, in Germany, experiments were carried out with automatic firing from pistols “Parabellum”, which had an elongated barrel. It turned out that this is possible, but the barrel overheats at the same time, which can lead to the failure of the weapon. We stopped at this, since there was no special need for pistols firing in bursts then. 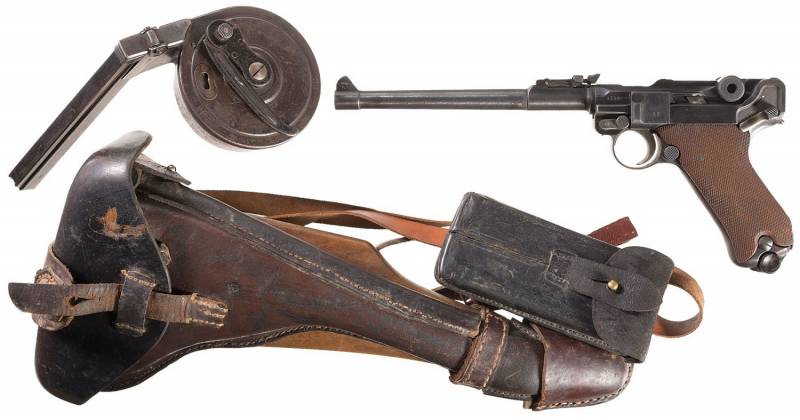 The Luger Artillery was the name of this prototype, and it was a truly impressive weapon, albeit quite bulky. The first 15 rounds in the magazine could still be loaded manually, but then it was impossible to do without a special device!

In that year 1914, a variant of the Steyr M1912 pistol with an extended magazine for 16 rounds was developed in Austria-Hungary. Prior to that, it used an eight-round magazine, loaded from a clip. Based on this sample, in the summer of 1916, they began to produce a modification of the M12 / P16 arr. 1916, which could fire in bursts, however, all 16 cartridges were shot in this way in just a second. The pistol was equipped with an original removable wooden butt holster, and 9873 such pistols were produced. The assault units of the Austro-Hungarian army and airplane observer pilots were armed with them. There was even an attempt to create … a paired firing device from two such pistols with a rigidly fixed butt, but it did not go beyond experiments with it. 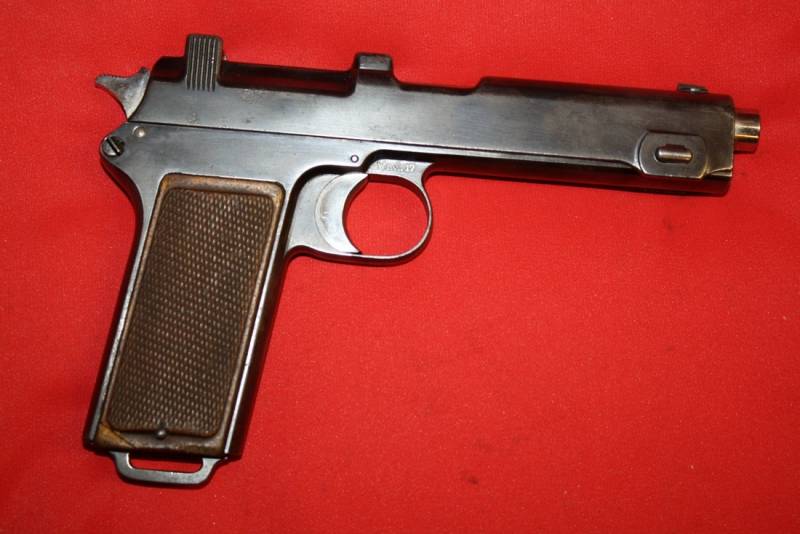 But this is the standard army “Steyr”, which took part in two world wars and demonstrated such high reliability that it was produced until 1957! 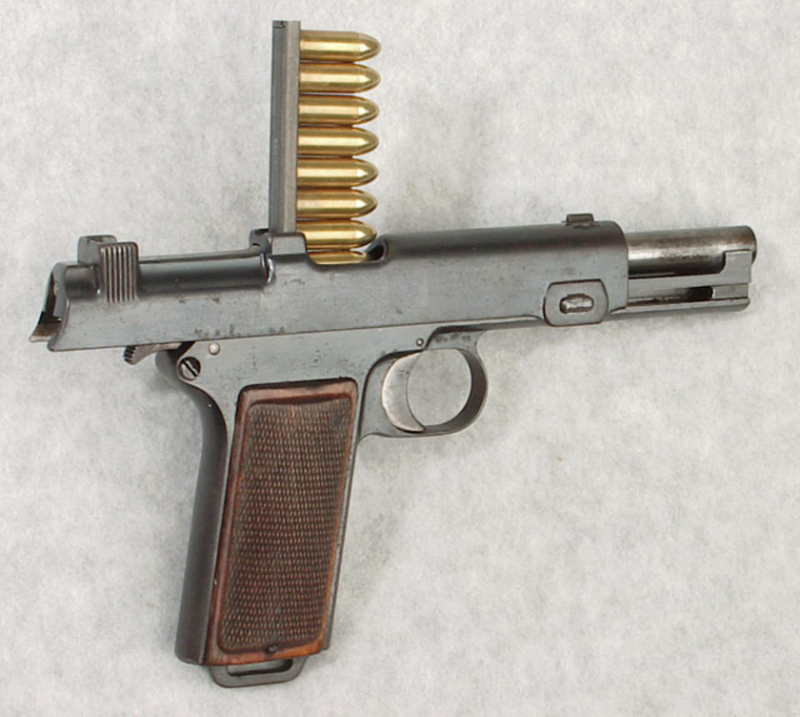 Although it was loaded from a clip – like a rifle!

In Germany in 1917, engineer Friedrich Blum designed the TM.08 (Trommelmagazin 08) drum magazine for 32 rounds, which could be used in Parabellum pistols. The pistol with the TM.08 magazine and the butt holster was designated the P.17. It also had a burst interpreter and, as such, was used as a weapon for the assault groups of the German army. In the last years of the First World War, this pistol was produced in an amount of approximately 144,000 copies, so that both he and the snail store became quite well known. 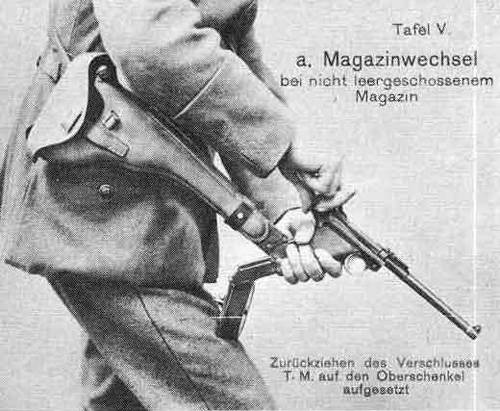 The photo shows the process of loading the P.17 pistol with the attached magazine TM.08 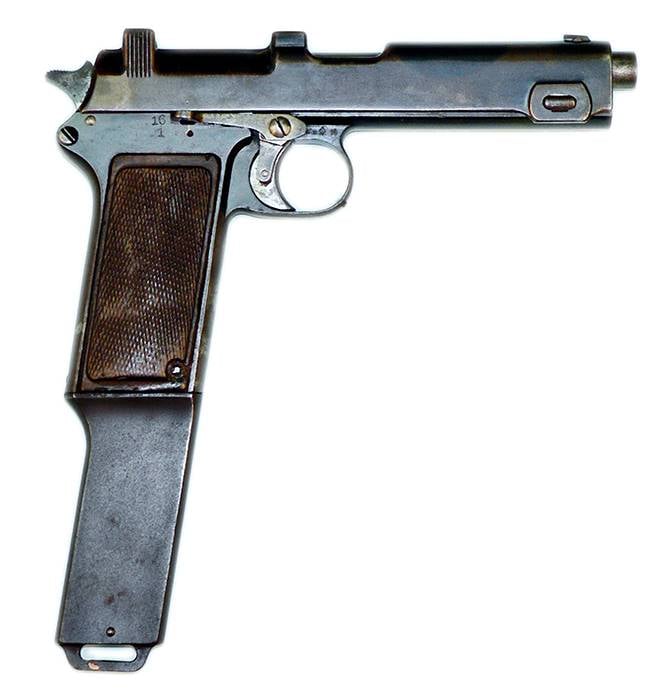 And this is the Steyr M1912 with an extended magazine …

And he’s with a butt! 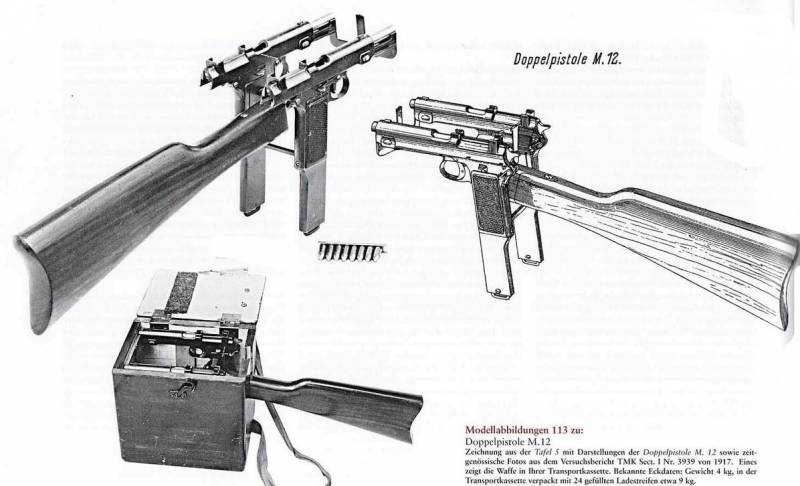 But after the end of the war, many of these pistols were destroyed, and the barrels of the remaining ones were shortened and put on sale. This was taken advantage of by a number of exporting firms, which began selling these pistols in the United States in the 1920s. Stoeger & Co. did this in New York and Pacific Arms Corporation in San Francisco. “Stoger” generally became an official trademark with the name “Luger” in the United States, and since 1929 it even began to stamp the following inscription on the receiver of its pistols: “GENUINE LUGER – REGISTERED US PATENT OFFICE”. Having a long barrel, they were distinguished by good accuracy, but they could not shoot in bursts, although, in principle, nothing particularly interfered with converting them for automatic firing. 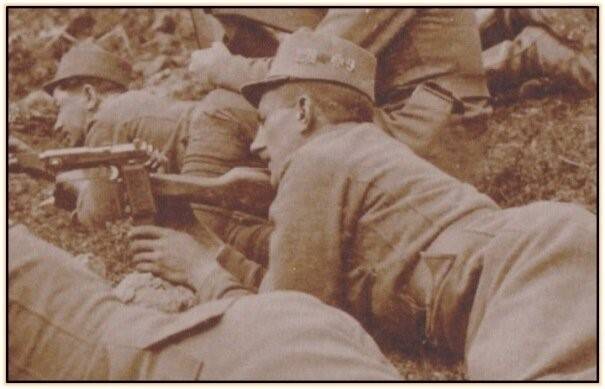 A soldier of the “patchwork empire” armed with an automatic “Steyr” …

That time in America was … hard! “Prohibition” reigned in the country. Alcohol was in short supply, but there were more weapons than ever, and the most diverse and modern. The police caught bootleggers, shot at them, and the bootleggers fired back at the police. On February 14, 1929, the Valentine’s Day massacre took place, when seven people were shot with Thompson submachine guns in a criminal showdown between gangs of bootleggers. It was this submachine gun with magazines for 50 and even 100 rounds that became at this time the favorite weapon of many American gangsters, who were ready to give any money for it. And even more than a large caliber 11.43 (the famous “45”) did not suit some of them, and they especially ordered submachine guns under the caliber .50 – absolutely phenomenal in terms of lethal force weapons. And everyone was “Thompson” good, except for one thing – too much weight and size!

And then there was a man in America who decided to make something more compact and equally powerful on the basis of the beloved Colt 1911A1 pistol – a standard semi-automatic pistol in .45 caliber used by the US military in World War I. The man’s name was Hyman Saul Lebman (referred to as Lehman in some documents) and was a saddle maker and gunsmith in San Antonio, Texas. He did both to order for Texas athletes, oil workers and pastoralists, and lived very well. In 1933, he met a couple of charming young men who needed effective weapons with increased firepower. 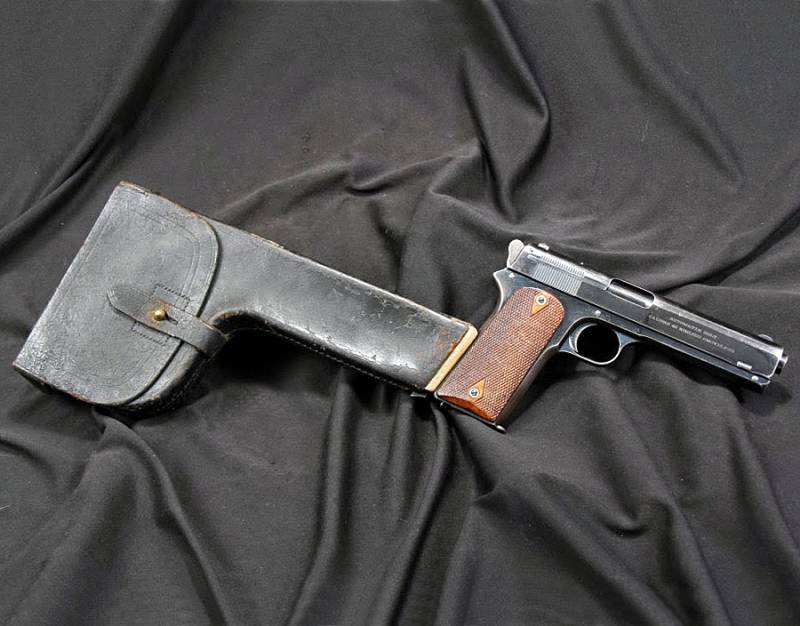 Colt М1905. In total, about 6000 of them were produced. To increase the accuracy of shooting, a holster could be attached to this pistol as a butt!

And he did not know that his clients were the notorious gangsters John Dillinger and Little Nelson, posing as wealthy Texas oilmen, which, however, was enough for him.

John Dillinger (above) and George Baby Nelson (below)

They were already the prime criminals at the top of the FBI’s most wanted list. But the armourer did not even know about it. They even visited Lehman’s house and dined with his family.

Well, Lebman did not think for a long time, but took the “Colt M1911A1” and turned it into something completely new, namely a compact submachine gun. First of all, he redesigned the trigger to provide fully automatic fire. Now the good old Colt could fire at 1000 rounds per minute. It is clear that the standard magazine, which contained only seven rounds, was not suitable for such shooting. And he added, firstly, a compensator to the barrel, which made the barrel lower when firing, and secondly, he supplied it with an elongated, larger-capacity magazine, which now held 18 rounds! 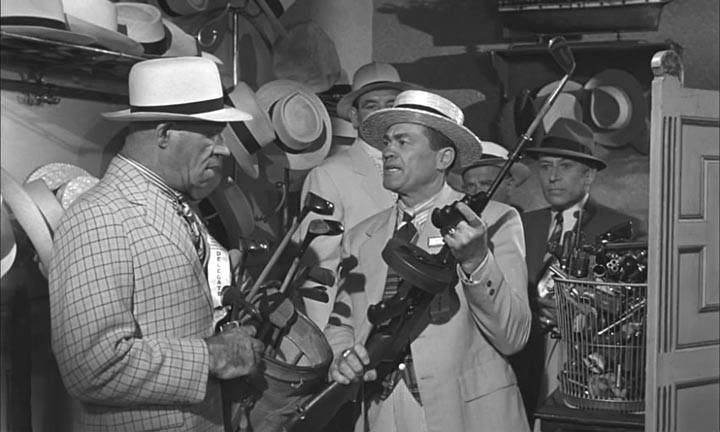 Everyone was fine with the Thompson submachine gun, but it was very bulky, so it was not so easy to disguise it in a bag of golf clubs! Still from the movie “There are only girls in jazz”

Directly under the barrel was the front grip of the Thompson M1928 submachine gun with finger grooves. Now it was possible to hold the weapon with two hands at once, making it much more convenient to control it. Some of the ordered pistols were made in .38 Super Automatic. This cartridge, created in 1929, was similar in size to the .45ACP, but fired with a 9 mm caliber bullet, so if the Colt’s .45ACP magazine held 18 rounds, then this one is already 22. 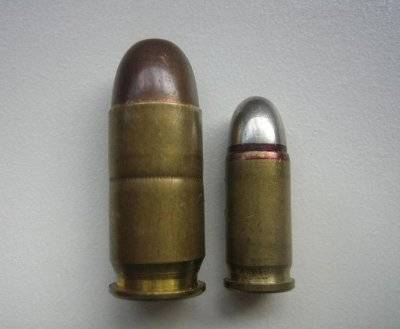 In the end, five pistols were made, then they were sold to Nelson, whom Lebman knew under the pseudonym James Williams.

As early as 1934, during the Little Bohemia massacre in Wisconsin, Nelson used a .38 Super 1911 S / N14130 pistol in a gunfight with police and shot one and wounded two police officers! A second pistol was later discovered in Dillinger’s possession. Another was found in Lebman’s shop at 111 South Flores Street in 1935 after the gang sent it to a gunsmith … for repairs.

Once the New Bohemia pistol was discovered, the FBI immediately traced the serial numbers of the other pistols and contacted Lebman, who was charged with violating the National Firearms Act (NFA) of 1934 and the Texas State Arms Act. In August 1935, he was sentenced to five years in prison in Texas, but the sentence was overturned because the district judge made a mistake in the execution of court documents. The re-trial took place in the jury, which Lebman acquitted by his verdict. 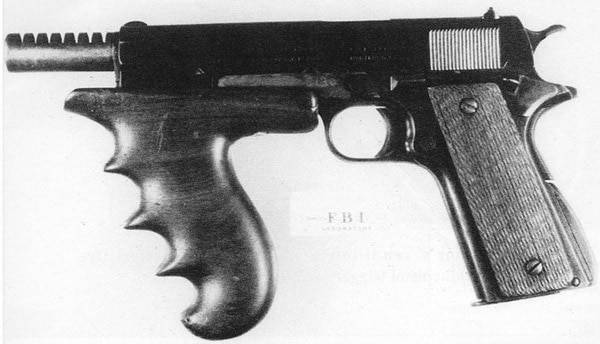 And this is what Lebman did in the end!

Today Lebman and his weapons are largely forgotten. One pistol found in his shop has been in the FBI museum since 1943. The rest are in various museums and private collections. Lebman himself worked for a long time, until the 1970s, and even became an expert for the Monarch Gun company in California. He retired due to Alzheimer’s disease and died in 1990, having outlived both Nelson and Dillinger by more than half a century.

His son, Marvin, a former lawyer, wrote in an article for the newspaper “My San Antonio” that his father did nothing but sell weapons to men in handsome suits and hats. Like this! Just business, nothing more!

“It was an honest business from which we did not make any secrets. We were half a block south of City Hall, and half a block north of the Police Department. Across the street from the county sheriff’s office. We were constantly selling something to our police officers, and we worked with them more often than with anyone else. “

By the way, Lebman’s store did not close immediately after his death, but in 1995. 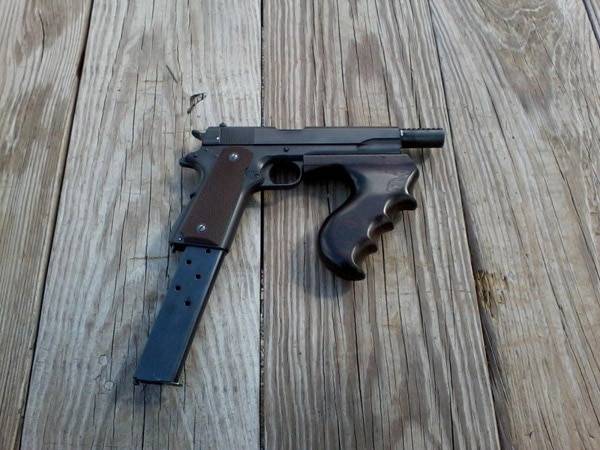 A replica of Lebman’s pistol

Now let’s add a description of all these events, taken from a modern work of art:

“… Took something that had not yet been seen in this world. He did it for him – Les had several of them, and he even gave one as a gift to Johnny; so a devoted supporter hands the cardinal a little memento – a talented gunsmith from San Antonio. Fully automatic pistol, standard Colt .45 caliber, standard weapon of law enforcement officers, but with minor modifications on the viscera, thanks to which one pull of the trigger released all cartridges in a three-second burst. Because the pistol fired so quickly, it needed a lot of ammunition, so Mr. Lebman, a gunsmith from San Antonio, carefully welded several magazines together so that they could hold eighteen rounds of AKP caliber .45, the size of a robin’s egg, each. The longer the trigger was held down, the more the recoil increased, and the tenth to eighteenth bullets would have to go to waste in the sky – but Lebman thought that too. He equipped the pistol with both a Cutts muzzle compensator and an additional vertical grip from the Thompson in the front: the compensator fought against bulging up the muzzle, the front grip offered the other hand a carved piece of wood with grooves for the fingers to resist the same muzzle drift. “

PS The author expresses his sincere gratitude to Mr. Wildcat for his help in preparing this material.