The only experienced XP50. Photo Airwar.ru

In 1935, Grumman joined the work on a promising carrier-based fighter, and the result was the appearance of the XF5F-1 prototype aircraft. For a number of reasons, this aircraft did not go into production. In parallel, by order of the Army Air Corps, a land-based fighter-interceptor was created. This machine remained in history as the XP-50 Skyrocket.

The terms of reference from the US Navy provided for the creation of a promising fighter with high performance characteristics. Particular emphasis was placed on takeoff and landing characteristics, maneuverability and rate of climb. The first program of 1935 was not crowned with success, but its results interested the command of the ground aviation.

Grumman proposed to the Navy a project for a twin-engine fighter with the working designation G-34. This development also interested the Army Air Corps, resulting in a second order. The army wished to receive a new fighter based on the G-34, adapted for operation on land airfields. 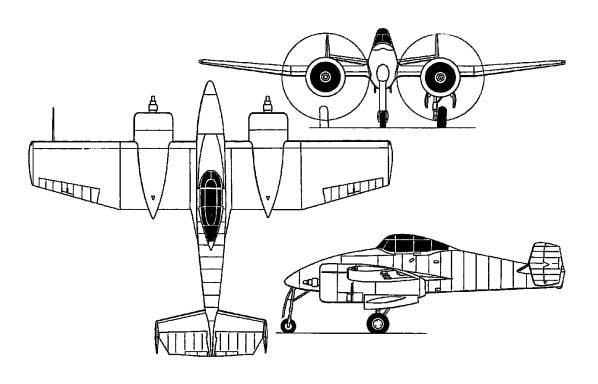 Design work was carried out in 1938-39. On November 25, 1939, the army and Grumman signed a contract for the continuation of work, construction and testing of a prototype. In accordance with the army nomenclature, the aircraft received the designation XP-50. From the base carrier-based fighter, he “inherited” the name Skyrocket.

For obvious reasons, the Air Corps could not accept the existing vehicle for the fleet and therefore put forward its own tactical and technical requirements. To fulfill them, the developer company had to significantly redesign the existing XF5F project. However, even after that, a fairly high degree of unification remained.

Again, it was about an all-metal twin-engine aircraft with a straight wing and H-shaped tail. However, the requirements for armament led to a major redesign of the fuselage and some systems. First of all, they removed all the elements necessary for operation on an aircraft carrier. The wing now did not have hinges for folding, and a hydraulically driven hook was removed from the fuselage. We also revised the composition of the equipment in accordance with other operating conditions.

To meet the requirements for armament, the fuselage was lengthened due to the developed nose cone. Now this part protruded beyond the leading edge of the wing and protruded forward relative to the propellers. At the same time, the layout of the fuselage remained the same: the cockpit and instruments were placed behind the bow weapons compartment. Due to the restructuring of the fuselage, the appearance of the aircraft has changed. Previously, the fuselage “hung” on the trailing edge of the wing, but now the main airframe units were smoothly mated, as on other machines. 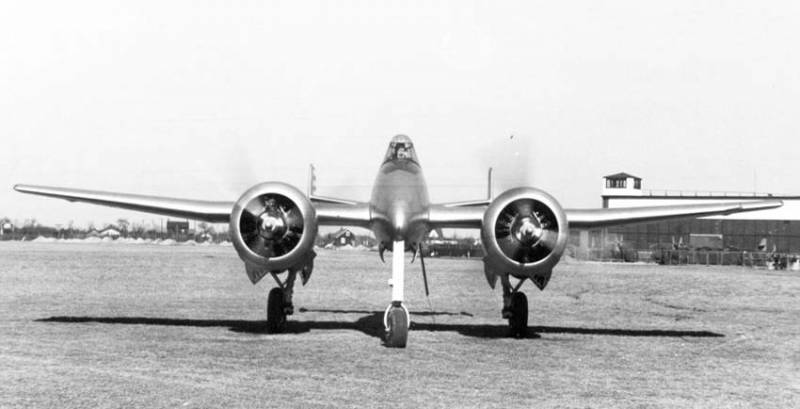 Both fighters from “Grumman” were distinguished by a characteristic narrow fuselage. Photo Airwar.ru

An updated wing was developed for the XP-50. It retained the two-spar design, profile and dimensions, but lost the folding hinge. The tail unit remains the same, H-shaped. As before, the planes found themselves in the stream from the propellers, which increased the efficiency of the rudders.

The wing nacelles were fitted with two Wright XR-1820-67 / 69 Cyclone piston engines with a capacity of 1200 hp each. with superchargers. The screws used were Hamilton Standard, similar to those used on the XF5F. The fuel system consisted of inert-gas pressurized wing fuel tanks.

XP-50 received machine-gun and cannon armament, suitable for fighting air and ground targets. The nose section housed two 20 mm automatic cannons 20 mm AN / M2 (Hispano-Suiza HS.404) and two heavy machine guns .50 in AN / M2 (Browning M2). The ammunition load of the guns consisted of 60 shells per barrel, machine guns – 500 rounds each. Under the wing there were nodes for the suspension of two 100-pound bombs.

The redesign of the fuselage led to a serious change in centering, which required the rebuilding of the chassis. The main struts remained in place in the engine nacelles. The tail wheel was abandoned, and a compartment appeared in the nose of the fuselage with a retractable long strut. 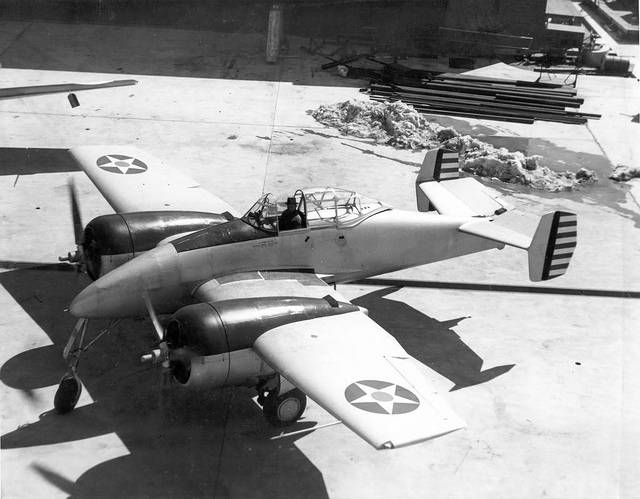 Top view: noticeably similar to the base XF5F. Photo Aviation-history.com

A land fighter in terms of its dimensions did not differ much from the base deck vehicle. The wingspan remained the same, 12.8 m. Due to the new nose, the length increased to 9.73 m. Changing the landing gear increased the height to 3.66 m.

The XP-50 was slightly heavier than its predecessor. Dry weight – 3.77 tons, normal take-off weight – 5.25 tons, maximum – 6.53 tons. The increase in mass could worsen the take-off and landing characteristics, but this was not critical for a land vehicle.

The deck-mounted XF5F-1 was built in the spring of 1940 and made its maiden flight at the same time. An experienced XP-50 was built on its basis in a few months. At the very beginning of 1941, he went to ground tests, after which preparations began for the first flight. 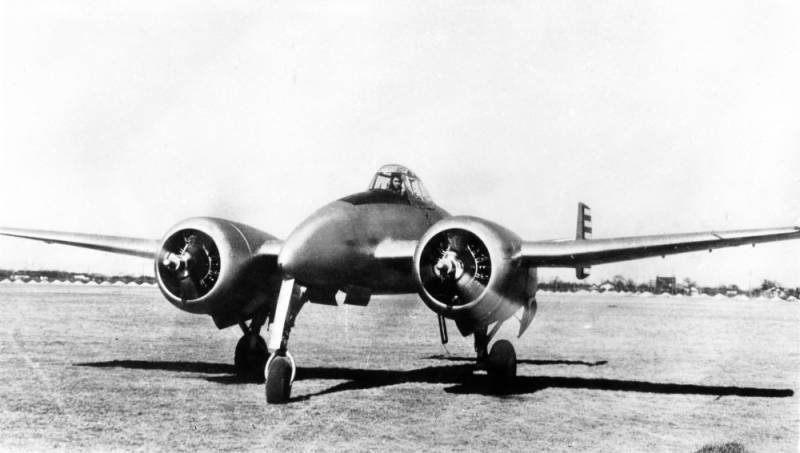 The first flight took place on February 18, 1941 and passed without incident. The aircraft had good maneuverability and controllability and did not show any significant deficiencies. This was probably due to the fact that all the main structural elements had already been tested within the framework of the previous project. However, the fine-tuning of new systems and units was still required.

In parallel with the correction of minor flaws, measurements of the main flight characteristics were carried out. In each flight, it was possible to obtain higher performance, but the aircraft never reached the design parameters. This was prevented by an accident that occurred during the 15th test flight.

On May 14, 1941, test pilot Robert L. Hall once again lifted the XP-50 into the air. During the scheduled flight program, one of the engine’s turbochargers was destroyed. The shrapnel inflicted multiple damage to the aircraft – among other things, they broke the hydraulic system pipeline and the manual landing gear cable. The pilot was not taken aback and tried to save the car. Due to active maneuvering and the use of the surviving systems, he managed to achieve the exit of the main struts, but the bow remained retracted.

On the ground, it was considered that landing without a bow strut would end in an accident and ordered the pilot to flee. R. Hall turned towards the nearest reservoir and jumped out with a parachute. Soon the pilot landed safely. An experienced XP-50 without control crashed and sank – without casualties or destruction.

The customer and the developer decided to discontinue the XP-50 project and did not build new prototype aircraft. It was proposed to use the accumulated experience when creating a new fighter. Grumman improved on the existing design and introduced the G-51 in May 1941. The Army Air Corps assigned it the XP-65 index. The development was paid for from the funds left over after the sudden termination of the previous project. 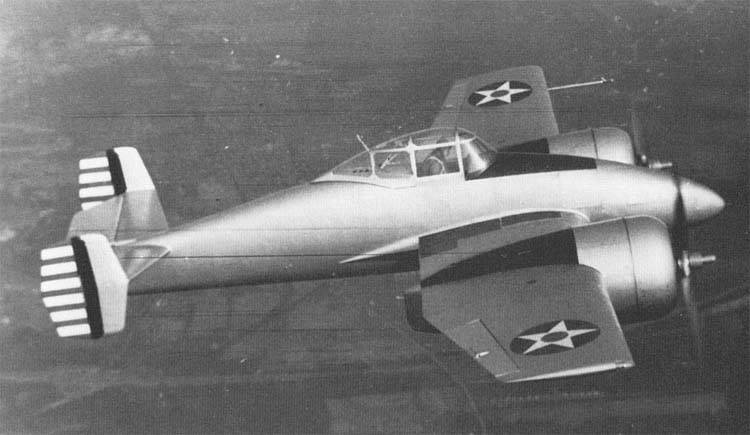 Soon there was a proposal to finalize the new project for the needs of the army and navy. On the basis of the “land” XP-65 for the army, it was proposed to make a carrier-based aircraft for the Navy – later it was named F7F Tigercat. However, the creation of unified fighters was associated with a host of problems of various kinds. In particular, the requirements of two customers in some cases could contradict each other.

Over time, opinion about the G-51 project has changed. The Navy began to fear that work on the aircraft for the Air Corps would hit the development of the carrier-based F7F. The Navy began to put pressure on the army and industry to abandon the XP-65. Curiously, the army did not resist, as the command doubted the Grumman’s ability to cope with the work for two customers. In addition, the development of the XP-65 threatened other projects from established market leaders and “longtime friends” of the army.

In January 1942, the order for the XP-65 was canceled, but work on the F7F continued. This aircraft made its maiden flight on November 2, 1942, and entered service the following year.

The XP-50 project in its original form had to be completed due to an accident. However, its further development, despite disputes and organizational problems, led to the emergence of a new successful aircraft. Unlike its predecessors, the F7F Tigercat successfully made it to the series and managed to take part in the battles of World War II.