On January 22, a delegation of the Turkish Ministry of National Defense, headed by the head of the department, Hulusi Akar, visited the Savunma Navy enterprise and the 1st Ana Bakım Merkezi tank repair plant. Representatives of the Ministry of Defense saw new serial and prototypes of armored vehicles, as well as units for use in promising projects. Such a show clearly demonstrates the desire of the Turkish authorities to master new directions and produce the maximum possible number of required samples for their army.

One of the main events within the framework of the official visit was the ceremony of handing over to the armed forces the first three modernized self-propelled guns T-155 Yeni Nesil Fırtına 2 (“Fırtına of the new generation”). These machines were taken from one of the combat units, after which a number of key units were repaired and replaced.

Initially, the T-155 self-propelled howitzer was a licensed version of the South Korean K9 Thunder armored vehicle. To date, the Turkish army has received 350 units. such a technique. The modernization project was developed by BMC Savunma and Aselsan, taking into account the experience of the combat use of self-propelled artillery in conflicts in recent years. A prototype of the modernized ACS was presented in 2019, and then the 1st Tank Repair Plant mastered the serial update of equipment. 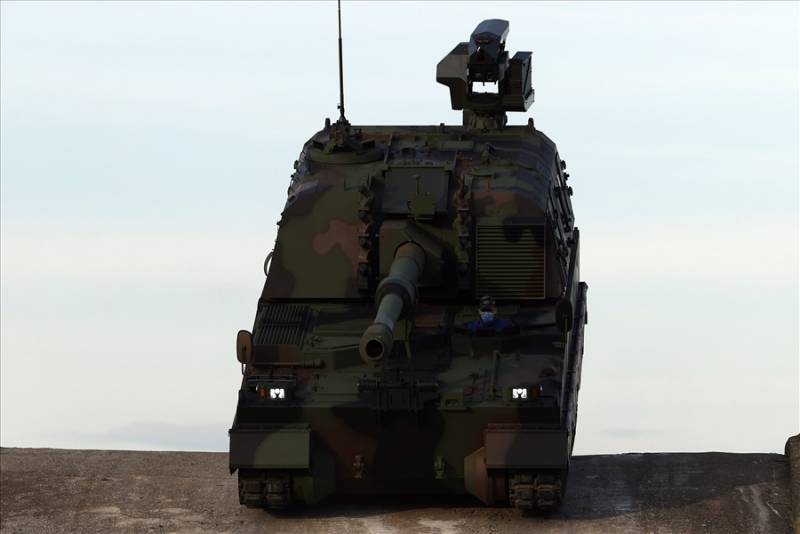 Demonstration of the running capabilities of the ACS

The Yeni Nesil Fırtına 2 project provides for the installation of a new fire control system from Aselsan. In addition, the semi-automatic loading hydraulics were replaced by an automatic electrical system. The ammunition rack received a means of temperature control. For self-defense, a new remotely controlled weapon station Aselsan SARP is used. If necessary, its optics are used as a sight for direct fire from the main gun.

At the BMC Savunma plant, the leadership of the Ministry of Defense was shown an experimental tank of a new type, built using available units and new components. Probably, such a project is being worked out in connection with the problems of rearmament of tank units.

The tank is built on the Leopard 2A4 chassis. The German-made standard building is supplemented by overhead armor modules and lattice screens manufactured by Roketsan. The Aselsan AKKOR active protection complex mounted on the turret was also used. The tower itself is borrowed from the Turkish-made Altay MBT and, apparently, corresponds to its approved serial appearance. 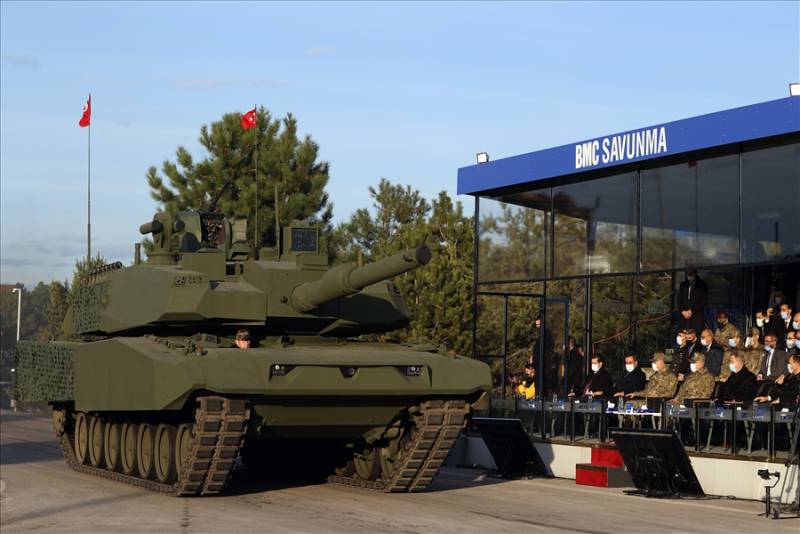 Experimental tank based on Leopard 2A4 and Altay

The appearance of such an experienced tank is of great interest. Currently, the Turkish army plans to launch mass production of Altai tanks in their original form. However, such plans faced the problem of the lack of imported engines or their own motors with the required characteristics. The use of the ready-made chassis “Leopard-2” with the new protection, possibly, will solve the typical problems with the engines.

Over the past several years, the issue of creating its own engines for armored vehicles has been actively studied. At the BMC Savunma plant, the Minister of Defense and other delegates were shown the result of this work in the form of three new diesels – Vuran, Azra and Utku with a capacity of 400, 600 and 1000 hp. respectively.

As reported, the 600-horsepower Azra engine has already found application in a promising project of an armored combat vehicle. The most powerful sample of the series, Utku, is offered for installation on the modernized Firtina self-propelled guns, which were equipped with MTU diesel engines as standard. Among other things, the use of German engines did not allow Turkey to export its self-propelled guns. After replacing the engine, the ACS can be sold without agreement with a foreign supplier. 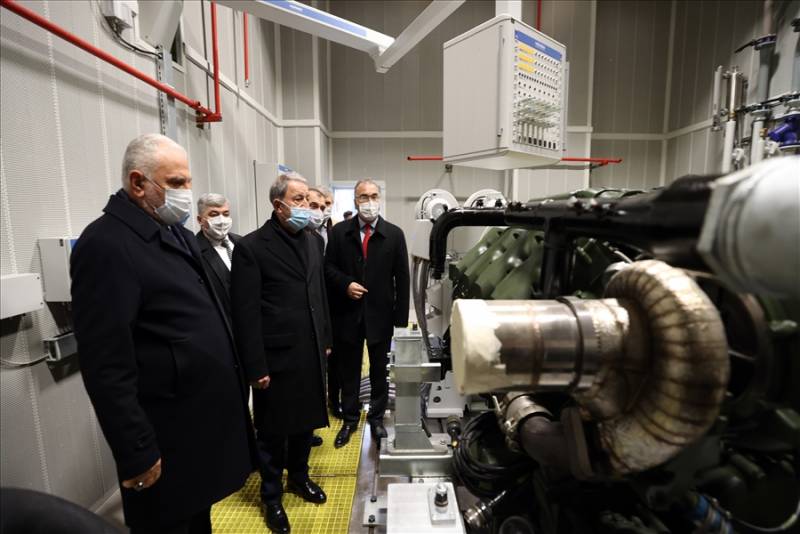 The issue of using new Turkish engines in the Altay project has not yet been disclosed. Perhaps, in the near future, the Altai MBT will be tested with a new power plant, which will allow it to start mass production. However, the prospects for such a replacement are not entirely clear, and the appearance of an experimental tank on a foreign chassis raises new questions.

BMC Savunma built and presented to the leadership of the Ministry of Defense an experimental wheeled armored vehicle of a new type. During the construction of the prototype, a number of new samples of Turkish design were used, which have not yet found application in the series.

An armored vehicle with an unknown name is built on the basis of a large armored hull with a front engine compartment and control compartment, as well as with an aft troop compartment. An experienced Azra engine is located in the nose compartment. On the pursuit of the hull, the Aselsan Korhan fighting compartment is installed, made in the form of a full-size turret with a 35-mm cannon, machine gun and smoke grenade launchers. Armor protection is supplemented by KAZ type AKKOR. 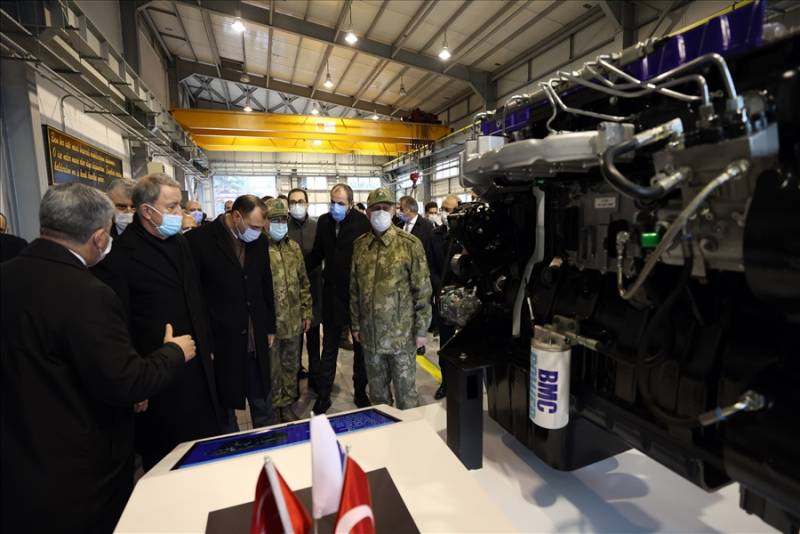 For many years, the Turkish army has been trying to select a new wheeled armored vehicle to replace the long-obsolete models. This tender is facing various difficulties and has not yet been completed. Perhaps the new project from BMC Savunma was developed specifically for this program – and the new armored personnel carrier could put an end to the protracted competition.

Turkey continues to build a modern and powerful army. At the same time, the defense industry is required to master the production of the maximum possible number of finished products, components, assemblies, ammunition, etc. Such tasks have been partially solved, and work in this direction continues with various results.

The experience of the T-155 Fırtına project shows the ability of the Turkish industry to master the licensed production of foreign technology. In addition, Turkey, with the help of its enterprises, can carry out modernization, providing for the replacement of existing components with its own products. The modernized Fırtına 2 has already gone into series and, probably, the further implementation of this project will not face serious problems. 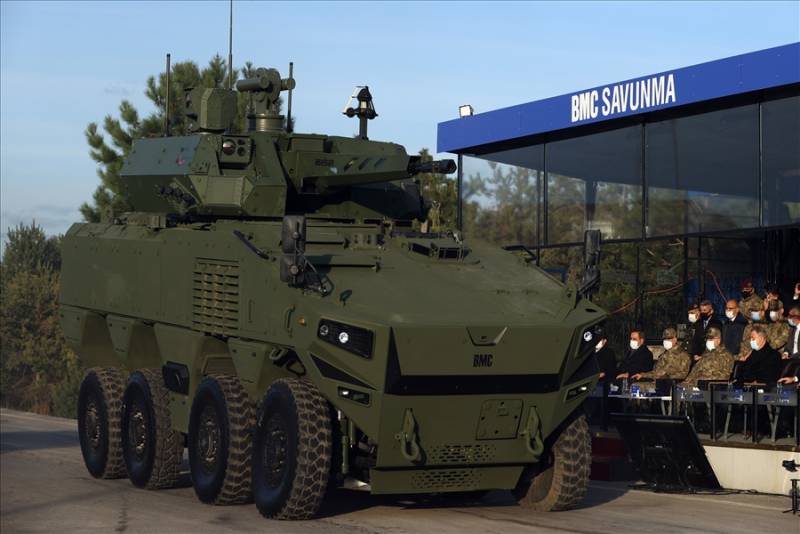 Certain problems remain in the development and production of our own technology. So, the design of the Altay MBT, despite the help of third countries, took a lot of time, and mass production has not yet been launched. At the moment, the reason for this is the lack of imported engines and Turkish replacements for them.

The process of development and production of our own units and assemblies continues successfully. In particular, a wide range of combat modules and other weapons has been developed. There are also advances in electronics. Other areas, such as engine building, are still developing at an insufficient pace. This, in a known way, interferes with the development of related areas, incl. the most important and responsible.

Thus, in Turkey, an ambiguous situation remains with the development and production of armored combat vehicles for the ground forces. Some classes of technology have already been mastered, and even their own design school is being formed. However, in the most difficult areas, difficulties, failures and time shifts are still observed.

The situation is likely to change for the better in the future, and the potential of the Turkish industry will gradually grow. Accordingly, new ceremonies will be held at the enterprises with the participation of the leadership of the military department. However, when new positive trends are outlined and manifest themselves and what results they will lead to is a big question.