Currently, the Brazilian ground forces are gradually transitioning to new armored vehicles. A number of samples of outdated types give way to modern machines of the VBTP-MR Guarani family. The process of such a replacement started at the beginning of the last decade and should be completed by the beginning of the thirties.

The decision to create a new family of armored combat vehicles was in the late nineties. At that time, the Brazilian army was armed with American-made M113 and EE-11 Urutu armored personnel carriers, EE-9 Cascavel reconnaissance vehicles and other products. All of them were very old and did not fully meet modern requirements.

In 1999, the army launched a program to develop a new family of armored combat vehicles. It was required to create a wheeled platform of modular architecture, on the basis of which it would be possible to build armored personnel carriers, infantry fighting vehicles, command and staff, ambulances and other vehicles. In the future, the technique of such a family would have to replace the old EE-9, EE-11, etc. 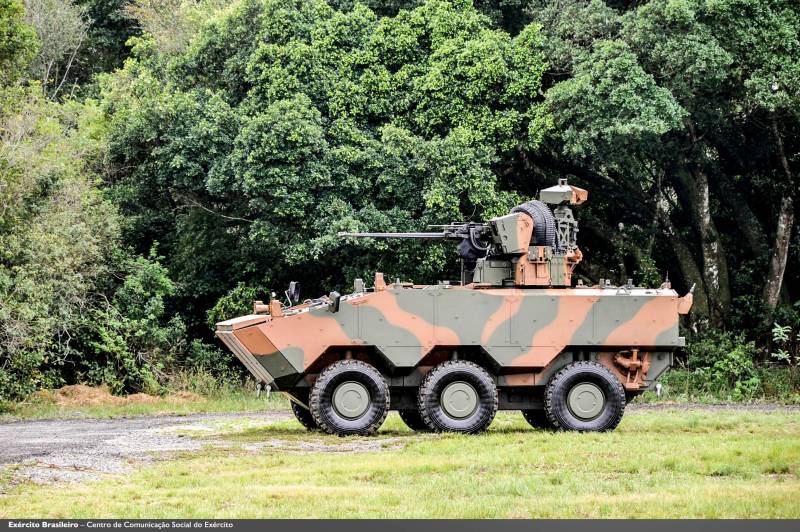 Initially, the development program for the new AFV was called Urutu-3, which indicated the continuity of generations. Subsequently, the finished sample was named Guarani. Several different projects were considered under this program. At the end of the 2000s, a joint project created in the framework of cooperation between Brazilian and foreign companies was chosen as the winner of the program.

The head developer of the platform called VBTP-MR (Viatura Blindada Transporte de Pessoal Média de Rodas – “Medium wheeled armored personnel carrier”) was the Italian company Iveco Defense Vehicles. The armor protection was created by the Brazilian companies Usiminas and Villares, various equipment was supplied by the local IMBEL, and the weapons were purchased from the Israeli Elbit Systems. In the future, the list of project participants has been expanded several times.

Features of the project

The basis of the VBTP-MR Guarani family is an armored wheeled chassis capable of carrying various combat modules and other target equipment. A machine with a three-axle undercarriage was recommended for serial production. Iveco also offered an eight-wheeled chassis option, but it did not interest the Brazilian army. 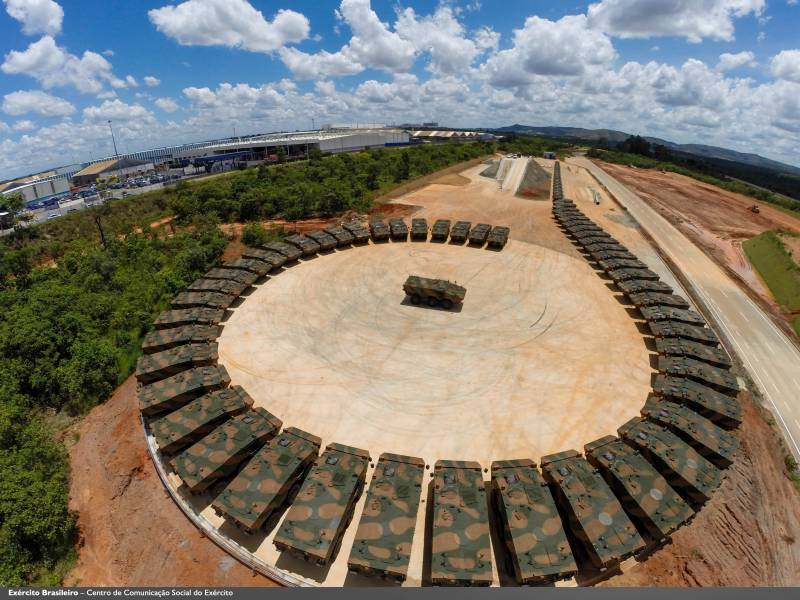 The Guarani building was built taking into account modern trends and accumulated experience. It is welded from steel sheets providing bullet and splinter protection. Measures have been taken to reinforce the bottom to protect against explosions. The hull layout is standard for modern armored personnel carriers – a power unit is placed in the bow, a driver is located next to it at the left side. Other volumes are given to the combat and airborne compartment.

The platform is equipped with a 383 hp Iveco Cursor 10ENT-C diesel engine. The automatic transmission provides drive to all wheels and also transfers power to the two propellers in the stern. The three-axle running gear has independent hydropneumatic wheel suspension. For the correct distribution of weight, the distance between the axles is different: the first and second are located closer to each other.

The base chassis has a length of 6.9 m, a width of 2.7 m and a height of less than 2.4 m. The combat weight in the configuration of an armored personnel carrier is 16.7 tons. When installing other target equipment, this parameter changes. All modifications can be transported by military transport aircraft C-130. The maximum speed on the highway reaches 110 km / h. It is possible to cross water obstacles at a speed of up to 8-9 km / h. The power reserve is 600 km. 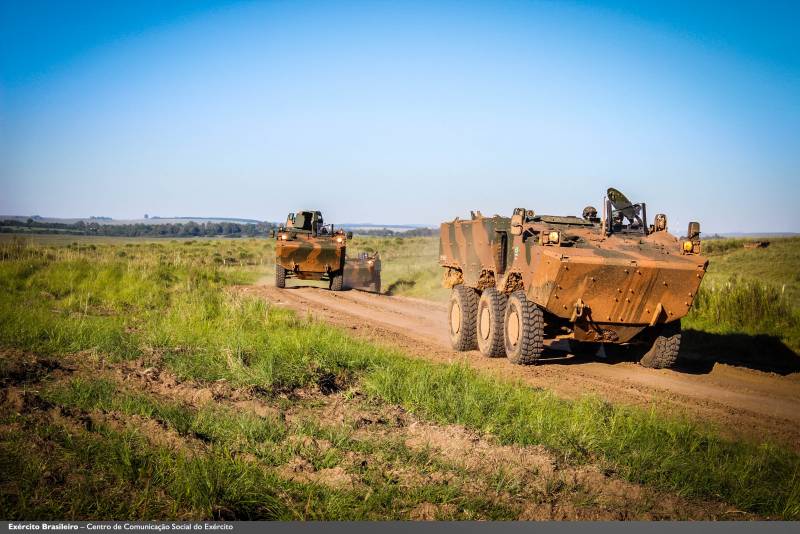 The main modification of the VBTP-MR is an armored personnel carrier. Such a vehicle is operated by a crew of two and carries nine paratroopers. To protect against explosions, the seats of the crew and troops are attached to the roof; the floor of the troop compartment is suspended with them. The armored personnel carrier is armed with a REMAX remotely controlled weapon station with a large-caliber machine gun.

An infantry fighting vehicle has been developed in cooperation with Elbit Systems. It is distinguished by the use of an Israeli-designed fighting compartment with a 30-mm Mk 44 automatic cannon. The installation of such a fighting compartment reduces the available volumes for the landing.

At the level of projects and technical proposals, there is a reconnaissance vehicle with advanced optics and a 105-mm gun and a self-propelled mortar of 120 mm caliber. Also offered are command and staff and communications vehicles, artillery reconnaissance, repair and evacuation and sanitary modification. Earlier it was reported that some modifications, such as BRM or ARVM, can be built on an elongated eight-wheeled chassis. 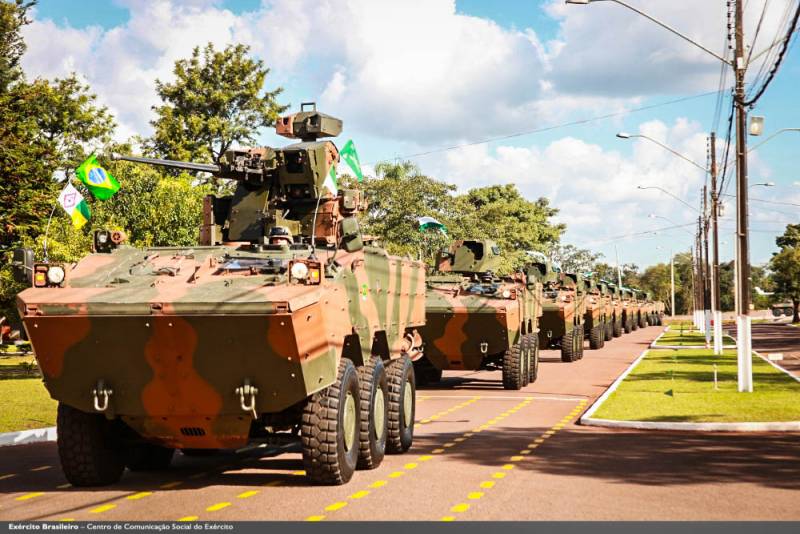 In fact, the VBTP-MR Guarani project has realized the full potential of the universal chassis. The customer is offered a whole set of unified armored vehicles for various purposes, quite capable of covering the bulk of the needs of the army and providing known advantages. However, so far not all the proposed modifications have gone into the series.

In November 2009, Brazil officially announced the launch of the production of experimental equipment; a corresponding contract appeared in December. At this stage, the Urutu 3 project was renamed Guarani. The first order provided for the construction of 16 armored personnel carriers for field and military tests with delivery in 2010-11. In parallel, the project participants had to prepare the full-scale production of new armored combat vehicles.

“Guarani” of the first batch successfully coped with the tests, and in August 2012 a contract for 86 units appeared. first series. Due to the previously created reserve, this order was completed by the beginning of 2013. Soon this technique was distributed among combat units to study, master and determine the optimal operating methods, independently and in conjunction with old types of equipment. 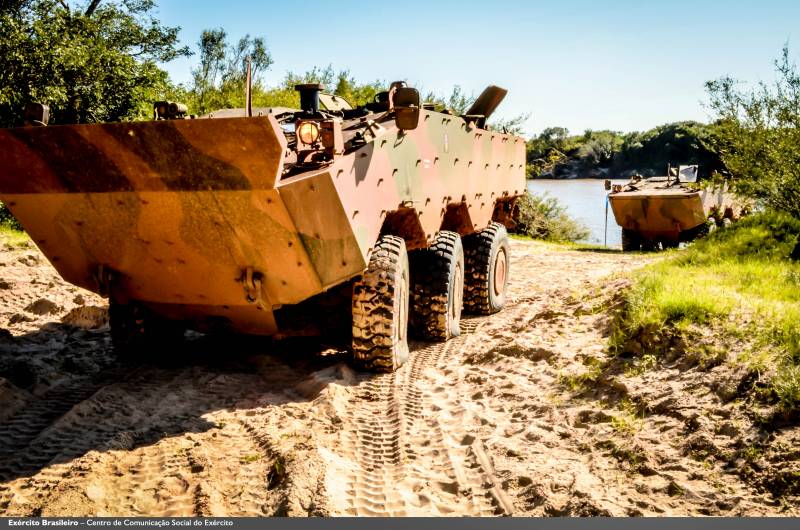 To date, the Brazilian ground forces have received more than 500 units. VBTP-MR in the configuration of armored personnel carriers and infantry fighting vehicles. Not less than 24 units. delivered to the Marine Corps. In total, by 2030, the Brazilian army plans to purchase 2044 armored combat vehicles of various types of the Guarani family. In 2009, the cost of such purchases was estimated at US $ 6 billion at the current exchange rate.

In the international market

Quite quickly, the VBTP-MR project interested the armies of several foreign countries. It was reported about the possible sale of such equipment to Argentina, Colombia, Chile and Ecuador. Potential buyers were interested in the three- and four-axis versions of the platform. However, only negotiations with Argentina reached a real contract. Since 2012, several dozen new armored personnel carriers have been handed over to her.

In 2017, it became known about the signing of an agreement with Lebanon. As part of the first batch of his army, 10 armored personnel carriers were sent. In the future, additional orders for equipment of various modifications were not ruled out.

Not so long ago, the Guarani project took part in a tender for the Philippine army. In December, he was declared the winner, resulting in a new contract. Philippines will be supplied with 28 units. Armored personnel carriers with a total value of 47 million US dollars. 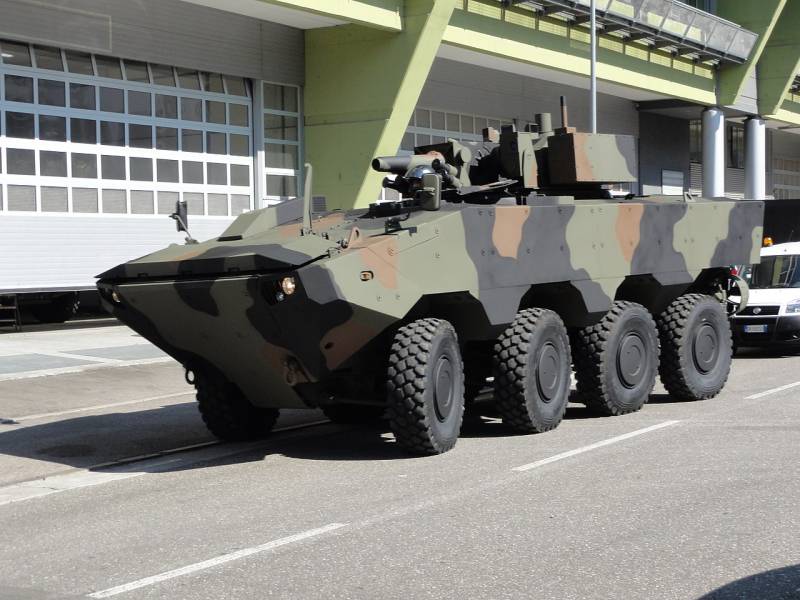 Based on the eight-wheeled version of the VBTP-MR, Iveco has developed a new SuperAV platform with a number of important changes. This sample was offered to the Italian army to replace obsolete amphibious transporters. Last year, the SuperAVs became the subject of a contract with the United States Marine Corps.

VBTP-MR armored vehicles are being built in large series. The bulk of such equipment goes to the Brazilian army. She has already received about a quarter of the required vehicles, and by the end of the decade plans to complete the rearmament. Guarani also competes with foreign samples, wins some tenders and is shipped abroad in limited quantities.

The reasons for such success are simple and understandable. The VBTP-MR project is based on well-known and proven ideas and solutions in the field of armored vehicles. In fact, the project offers high-quality modern AFVs with fairly high technical and economic characteristics. However, in this respect, “Guarani” is not a unique development, which is why it has to face serious competition.

The prospects for the VBTP-MR family of armored vehicles are obvious. Brazil will continue to order armored personnel carriers and infantry fighting vehicles, as well as other types of vehicles. As a result, this will make it possible to carry out the planned rearmament, probably even meeting the deadlines and estimates. It is also possible to continue deliveries to individual foreign countries and receive completely new export orders. Thus, the Urutu-3 / Guarani program copes with its tasks and can be regarded as successful and successful.