Let’s talk once again about the exorbitant ambitions of some of our military regarding the “presence” and “demonstrations” of Russia in the so-called far ocean zone. Because ambitions, which are then laid out on the pages of the media, are no longer exactly ambitions, they are positions expressed by people “in execution” throughout the country.

In simple terms, it’s like “you have to answer for the market”. But with this in modern Russia, everything is not just bad, everything is lousy. It’s easy to grumble today in terms of the fact that for five years we will have domes with gardens on Mars. In general, with our words, everything is just fine. And some warships will be sailing in squadrons near Florida, frightening the Americans not just, but very simply. But these are words.

In general, I would like to refer to the repeated words of the Commander-in-Chief of the Navy, Admiral Yevmenov, that one of the most important tasks is to build up ships in the distant sea and ocean zones. This is really surprising, especially when it is said that the Russian Navy is assigned a very wide range of tasks, including in the DMZ.

That is, it is necessary to build ships that will, in the opinion of Evmenov (and in fairness – not only him), which will solve various tasks on distant frontiers near foreign shores.

In general, such tasks do not immediately come to mind by themselves. For 30 years of Russia’s existence, there was one operation off the “distant shores”, which, it should be admitted, the Russian fleet failed. This, of course, is about supplying the group in Syria.

Next, I will quote the well-known analyst Sivkov, who believes that

“The presence of the Russian Navy in peacetime to ensure economic interests is necessary in the South Atlantic, oceanic zones adjacent to the coast of South America and regions of South-West Africa, in the North Atlantic Ocean, the Norwegian and Greenland Seas, in the north-western part of the Pacific Ocean in fishing areas, the central and eastern Mediterranean, the Indian Ocean adjacent to the northwest coast of Africa, piracy-infested islands and seas of the Pacific Ocean in the northern Indian Ocean. There, the Russian fleets in peacetime must fight pirates, protect the ships of Russian owners engaged in fishing activities and cargo transportation, demonstrate the country’s flag and other measures to support Russia’s diplomatic activities, participate in peacekeeping operations, protect and evacuate Russian citizens from zones of military conflicts, natural and man-made disasters ”.

Everything, however, got confused in the Oblonskys’ house …

The very concept of using “Russian fleets”, which will fight with someone there and protect someone off the coast of South America and the South Atlantic, looks really ridiculous. To be honest, I am not even drawn to unscientific fiction.

Let’s face it: almost all of the so-called “deep sea and oceanic fleet” in Russia are former Soviet ships 30 years old and older. 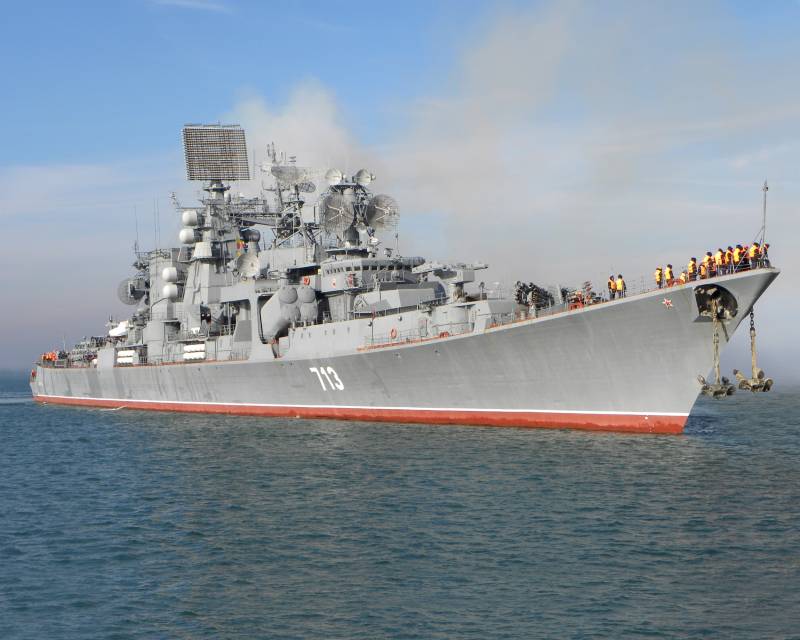 In general, what are “DMOZ ships”? These are aircraft carriers, cruisers, destroyers (BOD), frigates. And how wonderful it is with us that some can seriously talk about anti-piracy operations in the South Atlantic or in the Indian Ocean?

And that’s all that can be attributed to the ships of the far sea zone. 26 units. Corvettes and small rocket ships, sorry, will not go to the South Atlantic. Alas.

And of the remaining and included in this mournful list under 30 years old, only 6 (SIX) frigates.

Therefore, when patriotism goes off scale to such an extent that discussions begin that the fleet should search for groups of ships and track them, it makes you think. Moreover, very seriously.

Indeed, you just need to answer one single question: how frivolous is all this. When the “Doctor of Military Sciences” writes that “… important tasks will have to be solved in the far sea zone – to destroy strike, primarily aircraft carrier anti-submarine and other enemy groupings, and also to hit enemy coastal targets”, you involuntarily hear the friendly laughter of two dozen missile cruisers and nearly a hundred destroyers. American, of course. And eleven aircraft carriers.

And with these two dozen old Soviet ships, and even scattered across four fleets, Russian “experts” believe that it is possible to “destroy enemy strike groups”?

If only bringing him to exhaustion with laughter …

Yes, times are not the best in the US Navy, and they have ships there from repair to repair, even new ones. But quantity is always quantity, and when it comes to the 1 to 5 confrontation, all this talk about the “destruction of strike forces” by the forces of the surface fleet is ridiculous.

However, not only strike ships are a headache for the “high seas” fleet.

If you carefully study the lists of ships of the Russian Navy, you can come to another unpleasant conclusion: escort ships are also needed.

In other fleets, it is no better, and even worse.

In addition, in general, any transport operation for our fleet becomes unbearable if it requires even the slightest effort. Suffice it to recall the feverish buying up of rusty dry cargo ships in Ukraine through intermediaries in Belarus and Mongolia in order to provide a rather small aviation group of the Russian army in Syria.

The Black Sea Fleet failed on its own. And this, roughly speaking, from the Crimea through the straits to Syria. To the Mediterranean. And some talk about supplying ship groups on the other side of the world …

Americans are good. They have a completely modern fleet that has a network of bases around the world. We have nothing but a base in Syria, which means that we will still have to consider issues of supplying ships.

That is, after the question “where to get these groups of attack ships?”, The question should be asked “who will refuel the ships and feed the crews?”

There are no answers yet.

But the most unpleasant thing is that they cannot exist, since today in Russia there are no two things that can solve the problems of the fleet. There is no money and no way to build ships.

One of the modern experts had the idea that “The basis of the forces of the far sea zone of Russia is a frigate”. 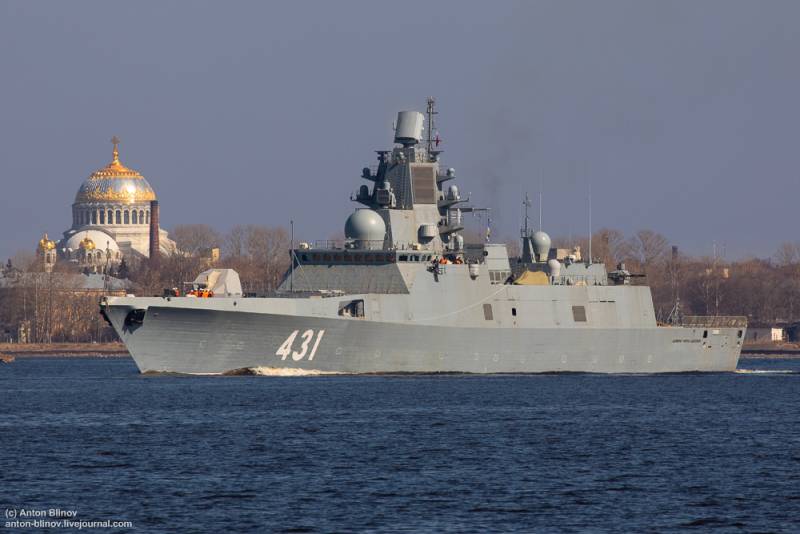 Yes, you can tell for a long time what terrible ships Russian frigates are. What are they equipped with energy and what modern weapons are on them. And they tell … Hotly and with enthusiasm.

Nevertheless, speaking about the capabilities of the Russian fleet to operate at a distance from the bases, speaking of the same frigates, it is worth remembering that frigates need fuel, water, food, ammunition, and so on.

Yes, it is possible to assemble something similar to a strike force from the existing ships of the fleet. However, how the supply problem will be solved is a little unclear at the moment.

In the Soviet Union, there was a very promising project 1183 “Pegasus”. Integrated supply ship (KKS) “Berezina”. Well-armed transport with a displacement of 25 thousand tons, capable of taking up to 5,000 tons of various cargo on board. It was built in a single copy in 1975 and cut into metal in 2002. 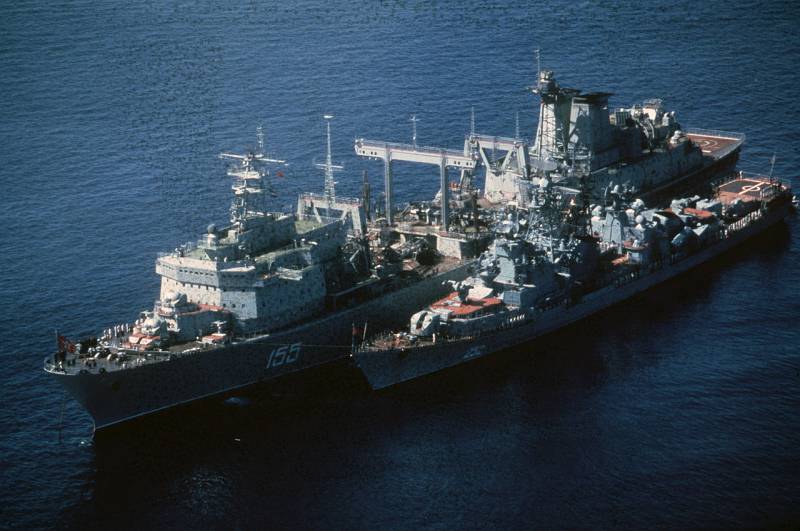 There are no analogues and no matter how expected. And the question of who will deliver these frigates, which will carry out some operations in the same Indian Ocean, is open. There are no bases, there are no KS ships, the question arises: what kind of missions in the far sea zone are we talking about?

And in general, can we talk about some kind of presence in the DMZ, if, roughly speaking, the ships carrying out this presence simply do not have a rear service?

They say that the theater starts from the coat rack and the port starts from the pier. The “today” of the Russian fleet is sad. There are no new ships and there is no way to build them at a decent pace. There is no money, no personnel, no production capacity.

There are, however, a sufficient number of propagandists who have recently been broadcasting about how strong the Russian fleet is, without thinking at all how serious it looks. And it doesn’t look very serious.

You can very bravely describe the capabilities of old Soviet ships and new Russian ones, equipped with the latest missiles such as “Caliber” or “Onyx”, the quality, of course, has a place to be, but we look at the fleets of our potential adversaries, and we understand that in order to represent the real a threat to the same Japanese fleet, you need to have somewhat greater capabilities than six (albeit new) frigates.

A complex approach. A correct, well-calculated plan, which includes not only the construction of one submarine per year and one attack ship in two years. In general, ships must be built faster, the Soviet legacy will soon end altogether.

But attention should also be paid to the problems of auxiliary vessels. Otherwise, all this talk about long trips and completing tasks in the DMZ will remain populism and idle chatter.

And I would like the Russian fleet to be a fleet, and not a gathering of the type “with the world on a string”, suitable only for the fact that in a war, heroically and quickly die.

But for this, especially for the development of the DMZ, the money should go to the construction of ships, and not disappear into another black hole in Russian reality.

For some reason, the distant sea zone haunts our military from politics and politicians from the war. Exciting, I would even say. There is nothing to go into it, nothing with anything, and nothing for anything, but I really want to. Either it was smeared with orders, or with sums of money, it is difficult to say.