In the previous article, we examined the problem of searching for aircraft carrier and shipborne strike groups (AUG and KUG), as well as targeting missile weapons at them using space reconnaissance means. The development of orbital constellations of reconnaissance and communications satellites is of strategic importance for ensuring the security of the state, however, the detection of aircraft carrier and naval strike groups (AUG and KUG) and the guidance of anti-ship missiles (ASM) at them can also be effectively carried out by other means. In this article, we will consider promising stratospheric complexes that can be used to solve these problems.

In the article Revival of airships. Airships as an important part of the armed forces of the XXI century, we examined the possible areas of use of airships on the battlefield. One of the most effective ways to use them is to create reconnaissance airships with colossal autonomy and field of view.

As an example, we can cite the Russian project of the unmanned airship “Berkut”, designed to operate at altitudes of about 20-23 kilometers for six months. The long duration of the flight must be ensured due to the lack of a crew and a power supply system powered by solar panels. The main supposed tasks of the Berkut airship are to provide relay communications and high-altitude reconnaissance, including the detection and identification of land and sea objects. 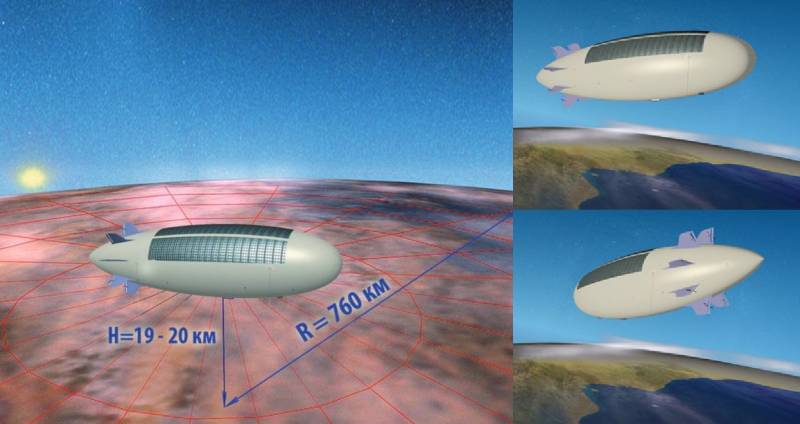 The mass of reconnaissance equipment that can be placed on the Berkut airship is 1,200 kilograms, the installed equipment is supplied with power. The airship can maintain a given position similar to a geostationary satellite. At an altitude of 20 kilometers, the radio horizon is about 600-750 kilometers, the surveyed surface area is over a million square kilometers, which is comparable to the area of ​​the territory of Germany and France combined. Modern radar stations (radars) with an active phased antenna array (AFAR) can provide a detection range for large surface targets at a distance of about 500-600 kilometers. 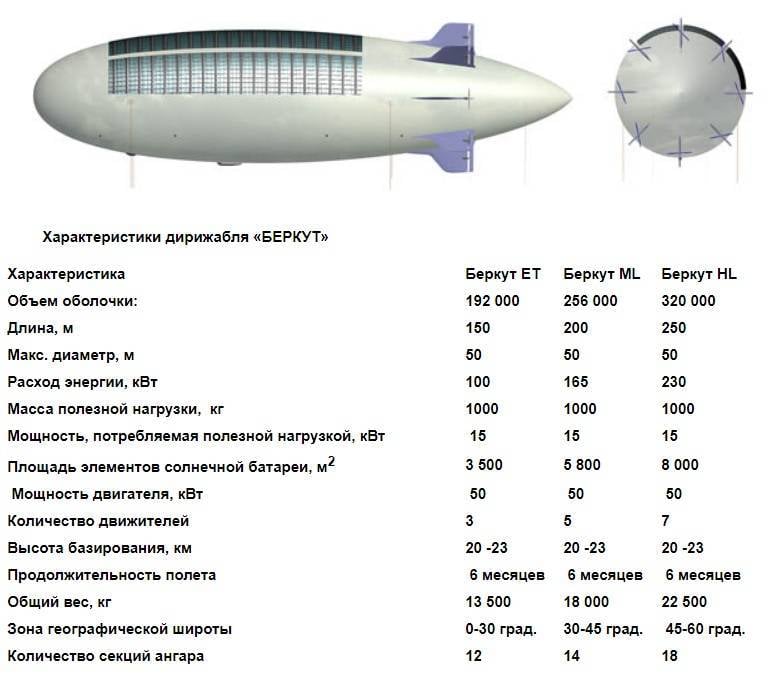 The performance characteristics of the unmanned airship “Berkut”.

Airships can climb higher. Almost guaranteed, their operation can be ensured at an altitude of about 30 kilometers, and the achieved height of the meteorological balloons is up to 50 kilometers.

In 2005, the US armed forces announced the opening of a program for the construction of super-high military balloons and airships, which will have to operate practically at the lower boundary of space. In the same year, the Agency for Advanced Defense Research DARPA carried out preliminary work to shape the appearance of a reconnaissance balloon capable of operating at an altitude of about 80 km.

What tasks can be assigned to high-altitude unmanned airships?

First of all, this is the control of the state borders of Russia, including the sea. High-altitude airships for long-range radar detection (AWACS) can detect low-flying cruise missiles and issue target designation to them for fighter aircraft and anti-aircraft missile systems (SAM), which is impossible for stationary over-the-horizon radars (ZGRLS). As applied to the control of water areas, unmanned airships can detect the periscopes of submarines, naval aviation, single surface ships, AUG and KUG.

Another option could be the deployment of unmanned AWACS airships “in neutral waters” – in key points of the world’s oceans and / or in the visibility zone of enemy naval bases. Maintenance of such airships can be carried out by specialized vessels or on the territory of friendly / neutral countries.

Potentially unmanned airships can accompany the AUG immediately after the aircraft carrier leaves the sea. Certain airships can be assigned dedicated control regions, in which they must escort “their” AUG / KUG, transferring them at certain points to airships of the next region.

Of course, bulky airships are a rather vulnerable target for enemy aircraft, but there are several nuances: firstly, when located within the state border and at a short distance from it, the safety of unmanned airships can be provided by the aviation of the Air Force (Air Force), while we we will provide surface control at a distance of about 600-800 kilometers from the state border. 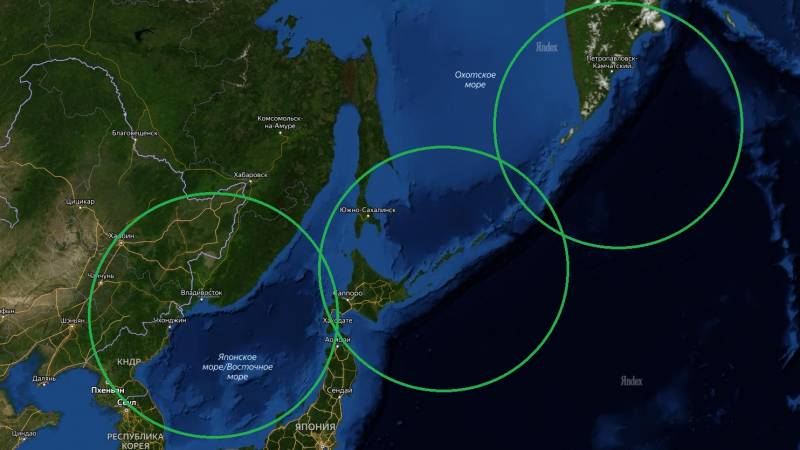 Only three unmanned high-altitude airship AWACS can control almost the entire Sea of ​​Japan, completely control the entrance to the Okhotsk Sea. It is unlikely that the United States will be able to repeat the covert deployment of the AUG off the coast of Kamchatka, as they did in 1982 (this operation is described in the article by Alexander Timokhin, Naval War for Beginners.

Secondly, the ability to provide tracking from a distance of about 500-600 kilometers will significantly complicate the work of enemy carrier-based aviation, since either the organization of continuous duty of fighters in the zone of destruction of the airship by air-to-air missiles will be required, which in turn will lead to accelerated wear of the resource of aircraft engines and additional the cost of flight time, or the fighters will have to be sent directly into the threatened period, in which case the airship can leave the affected area, even taking into account its low speed.

Thirdly, in the event of a real conflict, when the AUG is in the visibility zone of the reconnaissance airship and in the range of anti-ship missiles launched from SSGNs, fighters from the aircraft carrier can destroy the unmanned airship, but they will have nowhere to return. And such an exchange can be considered quite acceptable.

If the operating height of unmanned airships increases to 30-40 kilometers, then it will become even more difficult to shoot them down, and the viewing range of onboard reconnaissance means will increase significantly.

High-altitude unmanned aerial vehicles (UAVs) with a long flight duration will become an addition to stratospheric airships. It is assumed that stratospheric UAVs powered by electric motors powered by batteries and solar panels will be able to stay in the air for months or even years.

Based on the number of projects, stratospheric UAVs are an extremely promising area. First of all, they are considered as an alternative to satellites for the deployment of communication systems (for both civil and military applications), as well as for surveillance and reconnaissance.

One of the most ambitious projects is Boeing’s SolarEagle (Vulture II) UAV, which is supposed to provide the ability to relay communications and reconnaissance, continuously being in the air for five years (!) At an altitude of about twenty kilometers. The project is funded by the DARPA agency. 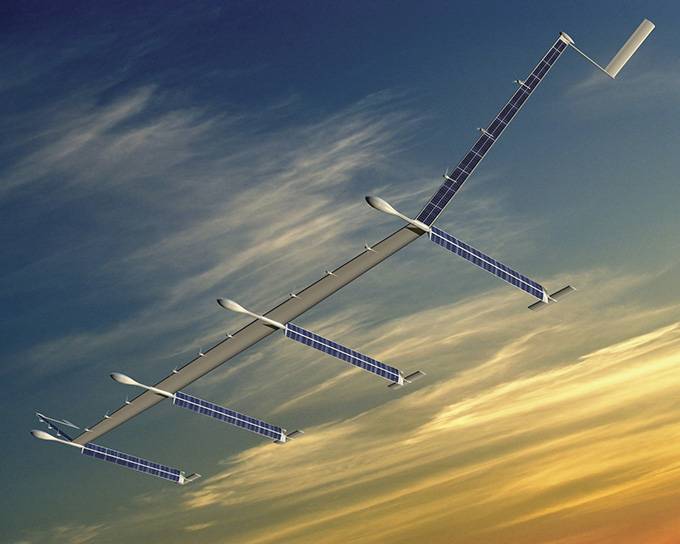 Another high-altitude electric UAV Solara 60 from Titan Aerospace, acquired by Google in 2014, is also designed for long flights at an altitude of over 20 kilometers. The design of the Solara 60 UAV includes a single electric motor with a large-diameter propeller, lithium-polymer batteries and solar panels. Google planned to acquire 11,000 Solara 60 UAVs to provide real-time images of the earth’s surface and deploy the Internet. The project was suspended in 2016.

In 2001, NASA tested the Helios high-altitude electric UAV. The flight altitude was 29.5 kilometers, the flight time was 40 minutes. 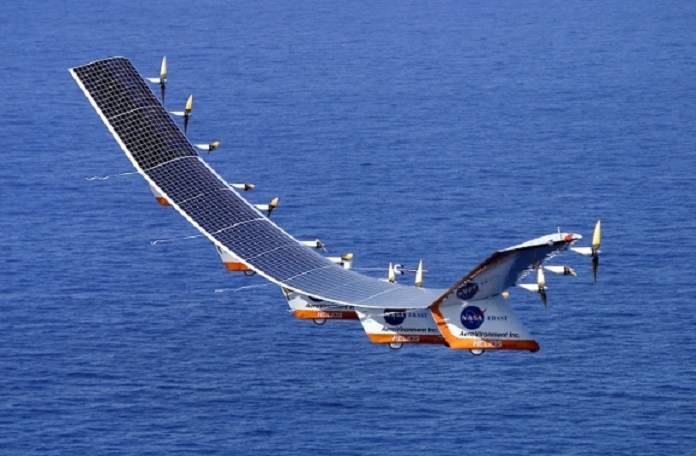 Russia has much more modest success in this direction. NPO named after Lavochkin is developing a project of the stratospheric UAV “Aist” LA-252 with a flight height of 15-22 kilometers and a carrying capacity of 25 kilograms. The two electric motors are powered by solar panels during the day and from batteries at night. 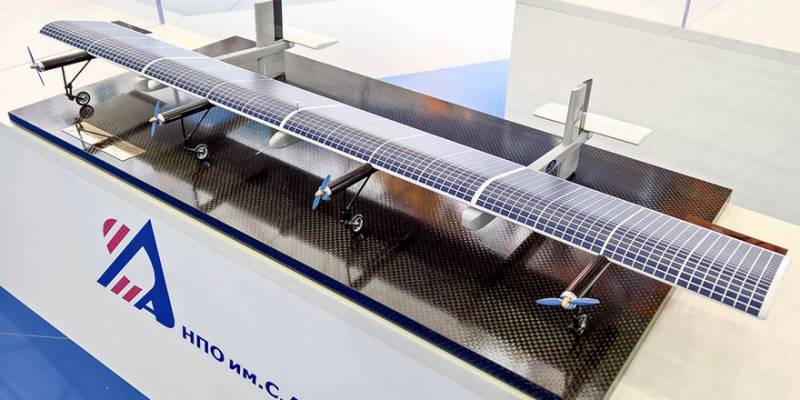 The Tiber company, together with the Advanced Research Fund (FPI), is developing the Sova stratospheric UAV capable of operating at an altitude of about 20 kilometers. 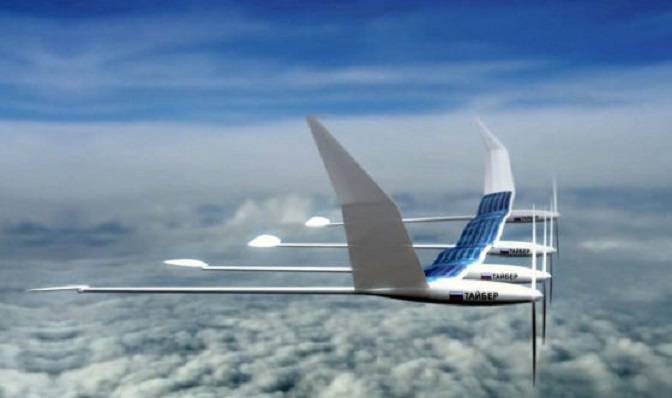 The concept of the UAV “Owl”. 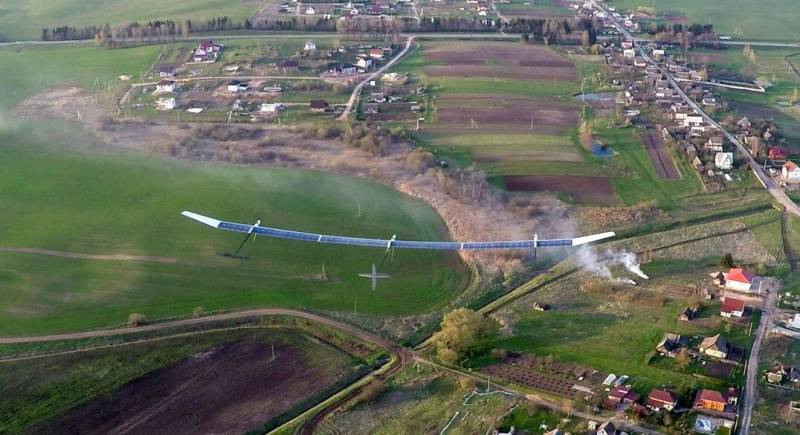 The prototype of the UAV “Owl”.

On the other hand, this type of aircraft is only at the beginning of its development. Progress in the field of batteries and electric motors allows us to talk about commercial passenger aviation, and the spread of green energy contributes to a large number of work to improve the efficiency of solar cells. UAVs with hydrogen fuel cells show excellent results.

A hydrogen fuel cell UAV, developed by the Delft University of Technology (Netherlands) in collaboration with the Royal Navy and the Coast Guard, is several times longer than a similarly sized UAV powered by batteries.

We should not forget about the progress in the development of composite materials that allow increasing the strength of the aircraft body while reducing weight and reducing radar signature, as well as 3D printing technologies that make it possible to manufacture light and durable monolithic parts with a complex internal structure, the production of which by traditional methods impossible.

Together, this makes it possible to count on the appearance of high-altitude electric UAVs – actually atmospheric satellites with increased carrying capacity and practically unlimited flight range.

Just as the reduction in the size and complexity of the production of artificial earth satellites (AES), as well as the cost of their launch, leads to the fact that their number in orbit is rapidly increasing, the improvement of stratospheric UAVs can lead to a similar effect in the stratosphere, when at a certain moment in the sky will be tens of thousands of high-altitude electric UAVs that relay communications, perform meteorological observations, navigation, reconnaissance and solve a huge number of other commercial and military tasks.

What will this mean for us in terms of tracking the AUG / KUG? The fact that it will not be so easy to find a reconnaissance UAV among a huge number of manned aircraft, civil and military UAVs of different countries and for various purposes.

The traffic of civilian vessels makes it difficult to find AUG and KUG in the ocean, but the detection of reconnaissance UAVs can be difficult due to the rapidly increasing number of aircraft of all types.

Compared to manned reconnaissance aircraft, other types of UAVs and stratospheric airships, high-altitude electric UAVs should be significantly less visible. Their thermal signature is practically absent, and the radar signature is insignificant and can be reduced with the help of appropriate solutions.

Stratospheric airships and high-altitude electric UAVs can make up the “second echelon” of reconnaissance and target designation systems, supplementing the capabilities of reconnaissance satellites and capable of largely neutralizing “dark spots” in the issue of detecting AUG and KUG.

It should be borne in mind that an important condition ensuring the operability of stratospheric airships and high-altitude electric UAVs is the availability of global satellite communication systems – only in this case they will be able to operate at a distance from the state borders of Russia.