One of the most important elements of the Soviet system of countering aircraft carrier and ship strike groups (AUG and KUG) of a potential enemy, along with the global satellite system of maritime space reconnaissance and target designation (MCRTs) “Legend”, considered in the article Find an aircraft carrier: space reconnaissance assets, were strategic aircraft reconnaissance and target designation Tu-95RTs. From 1963 to 1969, in the interests of the Navy (Navy) of the Soviet Union, 52 (!) Tu-95RTs aircraft were built, which served from 1964 to the early 90s of the twentieth century. Tu-95RTs aircraft carried out patrols for about a day, which made it possible to “reveal” the surface situation over a vast territory.

After the Tu-95RTs was decommissioned, Tu-142MRTs should have come to replace it, however, due to the collapse of the USSR, as well as a change in the concept, involving the issuance of target designation from the Legend system satellites, work on the Tu-142MRTs stopped, and the only copy of the aircraft was scrapped.

Considering the state of the Legend satellite system and the Liana system that came to replace it, after the Tu-95RTs was abandoned, the Russian Navy was left without long-range aerial reconnaissance.

Is it advisable now to develop a strategic reconnaissance aircraft, conceptually similar to the Tu-95RTs, but implemented at a new technical level?

There is an opinion that the crews of the Tu-95RTs were to some extent “suicide bombers”, since in the event of a conflict, there was an extremely high probability that they would be destroyed by enemy carrier-based aircraft, and even before they could issue target designations for guiding anti-ship missiles (RCC). These risks have not disappeared anywhere, moreover, most likely they have even increased.

However, aviation has got its own trump card – unmanned aerial vehicles (UAVs), of which we are interested in HALE (High Altitude Long Endurance) class vehicles – long-range UAVs for flights at altitudes of more than 14,000 meters and partly of the MALE class (Medium Altitude Long Endurance) – BLPA long-range for flights at altitudes of 4500-14000 meters.

If the high-altitude reconnaissance airships and electric UAVs discussed in the article Find an aircraft carrier: a view from the stratosphere are only at the very beginning of their development, then the “classic” UAVs with turbojet, turboprop or piston engines have already reached technical “maturity” and are actively used to solve various combat tasks. The first and main task of the UAV is to carry out reconnaissance and target designation.

One of the most sophisticated and expensive UAVs is the HALE-class strategic heavy high-altitude UAVs, the most prominent representatives of which are the American RQ-4 Global Hawk UAV and its naval version, the MQ-4C Triton. Practically the only serious drawback of these machines is their price, which is $ 120-140 million, excluding development costs. 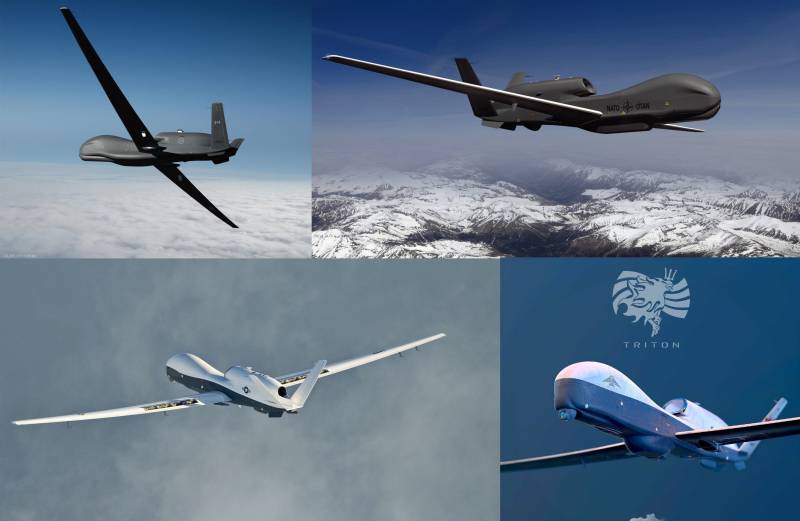 UAVs RQ-4 Global Hawk (above) and MQ-4C Triton (below)

The RQ-4 Global Hawk UAV radar allows a day to receive an image of an area of ​​138 thousand square kilometers from a distance of 200 kilometers with a resolution of 1 square meter, and in a point mode, an image with a resolution of 0.3 square meters can be obtained. The received information is transmitted through a satellite communication channel at a speed of up to 50 Mbit / s. The UAV is also equipped with an optical location station with day, night and thermal imaging channels. 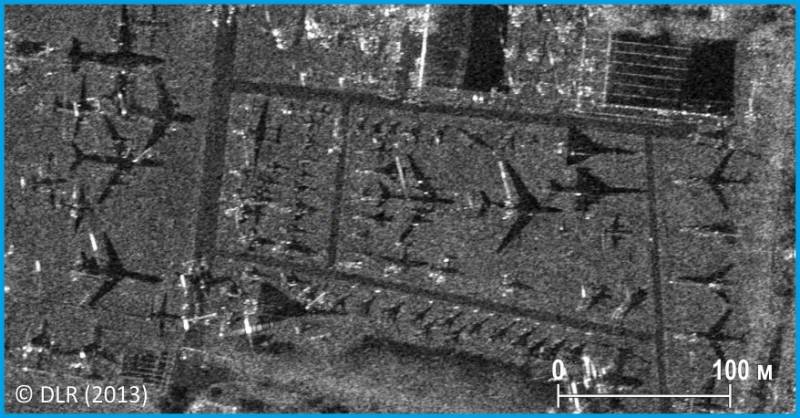 Radar image with a resolution of less than 1 meter. The images received by the RQ-4 Global Hawk UAV radar and the MQ-4C Triton UAV should be of even higher quality

Currently, the RQ-4 Global Hawk UAVs are flying along the Russian border, carrying out reconnaissance for 200-300 kilometers inland. It can be assumed that the UAVs keep at a certain distance from the border in order not to come under fire from Russian anti-aircraft missile systems (SAM), and the real range of the radar is underestimated in order to misinform the enemy and can actually be up to 400-500 kilometers.

The MQ-4C Triton UAV has a similar set of equipment optimized for detecting targets on the surface of the water. It is capable of patrolling at an altitude of 17 kilometers at a speed of up to 610 kilometers per hour. The duration of the patrol reaches 30 hours. The MQ-4C Triton is capable of dramatically changing altitude and “diving” under the clouds to obtain an optical image of the targets detected by the radar.

The all-round radar with AFAR allows you to scan 5200 square kilometers in one pass. The software can carry out automatic target recognition based on radar signatures received from the radar. Also on the UAV MQ-4C Triton is placed an electronic reconnaissance system (RER), similar to that installed on the RER Lockheed EP-3 aircraft, which allows the UAV to evade detection of enemy radar. Also, at the moment, work is underway to give the MQ-4C Triton UAV radar the function of detecting air targets.

Paradoxically, for the Russian Navy, which critically depends on the ability to use long-range anti-ship missiles, such a UAV would be much more useful than for the US Navy. It could replace the strategic reconnaissance aircraft Tu-95RTs, providing several times greater efficiency in detecting enemy AUG and KUG.

Unfortunately, while the Russian version of the RQ-4 Global Hawk UAV, capable of qualitatively surpassing the Tu-95RTs reconnaissance aircraft in efficiency, can only be represented in the picture.

It can be assumed that the next generation of strategic reconnaissance aircraft can be implemented taking into account the widespread use of visibility reduction tools, similar to those used on the F-22 and F-35 fighters, as well as B-2 bombers and promising B-21 Raider bombers.

Presumably, they will use three-circuit turbojet engines, which are currently being actively developed by American companies. For example, the XA-100 engine, which is being developed by General Electric, according to official information, can reduce fuel consumption by 25% and increase thrust by 20%. Therefore, it is easy to extrapolate the increase in the characteristics of an RQ-4 Global Hawk / MQ-4C Triton UAV when such an engine is installed on them.

If we speak in the format of an alternative history, then Russia could well bypass the United States in creating a UAV.

In 2014, the Sukhoi Design Bureau announced the Zond-1 UAV project and its version of the Zond-2 early-range radar detection (AWACS) HALE class with a wingspan of 35 meters, a flight height of up to 16 kilometers and a flight duration of up to 24 hours. Two AI-222-25 turbojet engines (TRD) used on the Yak-130 training aircraft were supposed to be used as engines.

Even earlier, in 1993, the Myasishchev Design Bureau proposed a project for the M-62 high-altitude UAV.

However, history does not know the subjunctive mood, and at that time all projects of high-altitude UAVs remained at the stage of sketches and layouts. As mentioned above, at the moment Russia does not have analogues of the RQ-4 Global Hawk and MQ-4C Triton UAVs, and, in general, HALE-class UAVs. The closest solution is the Altair (Altius-M / Altius-U) UAV of the MALE class.

In terms of its flight characteristics – a cruising speed of 250 kilometers per hour (maximum 450 km / h) and a ceiling of 12,000 meters, the UAV – Altair is approximately one and a half to two times inferior to the UAV of the RQ-4 Global Hawk / MQ-4C Triton type, but it surpasses it in patrol time, which is 48 hours (taking into account the lower speed and flight altitude, the area of ​​the surveyed surface covered by the Altair UAV in one flight will in any case be less). The UAV “Altair” is equipped with two diesel engines with a maximum power of 500 liters. with. 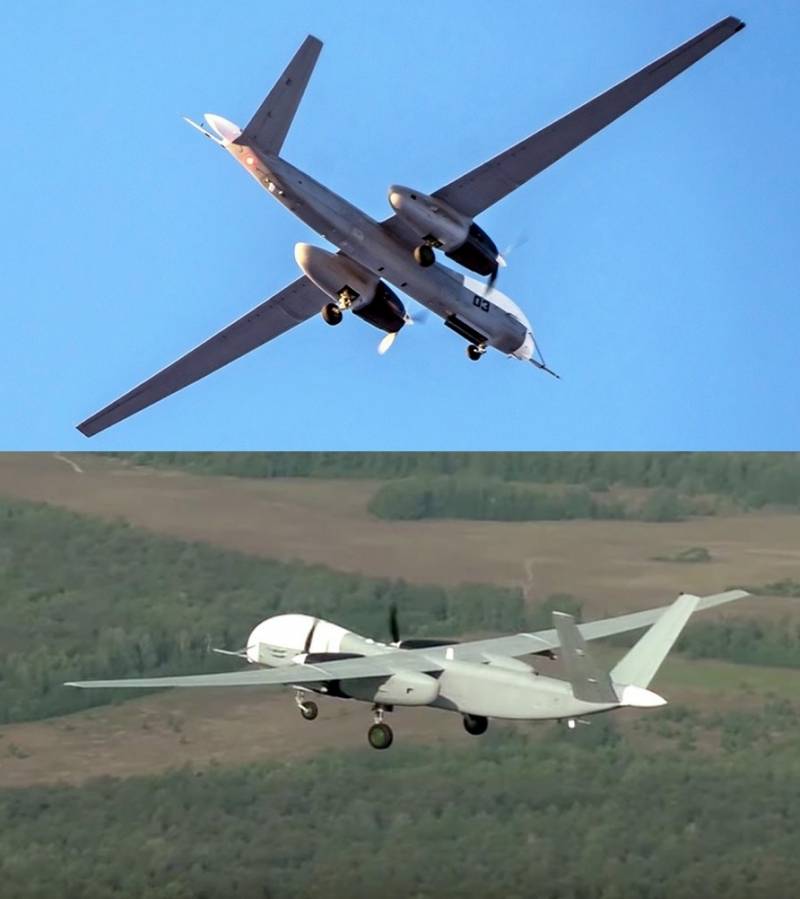 The Altair UAV is equipped with an optical-location surveillance system and a side-looking AFAR radar, there is no information on the characteristics of these systems. At the same time, the carrying capacity of 2000 kilograms makes it possible to accommodate rather massive equipment. It is planned to install a satellite communication system that provides global control of the UAV (the only question is the throughput of the existing satellite communication channels of the Russian Federation – the speed of 5 kilobits is clearly not enough here).

The development of the Altair UAV comes with problems and delays: the original contractor is JSC NPO OKB im. MP Simonov “”, engaged in the project since 2011, after a series of checks and criminal proceedings against the General Director of the OKB Alexander Gomzin on charges of embezzling 900 million rubles allocated for the development of the UAV, was suspended from work, after which the general contractor for the project UAV Altair became JSC Ural Civil Aviation Plant. In January 2020, information was passed on the flight tests of the Altius-U UAV.

The first flight of the UAV “Altius-U”

There is information about the implementation of the civil version of the Altair UAV – the Unmanned Aerial Vehicle (UAV) project. The project was presented by JSC NPO OKB im. M.P. Simonov “in 2017. 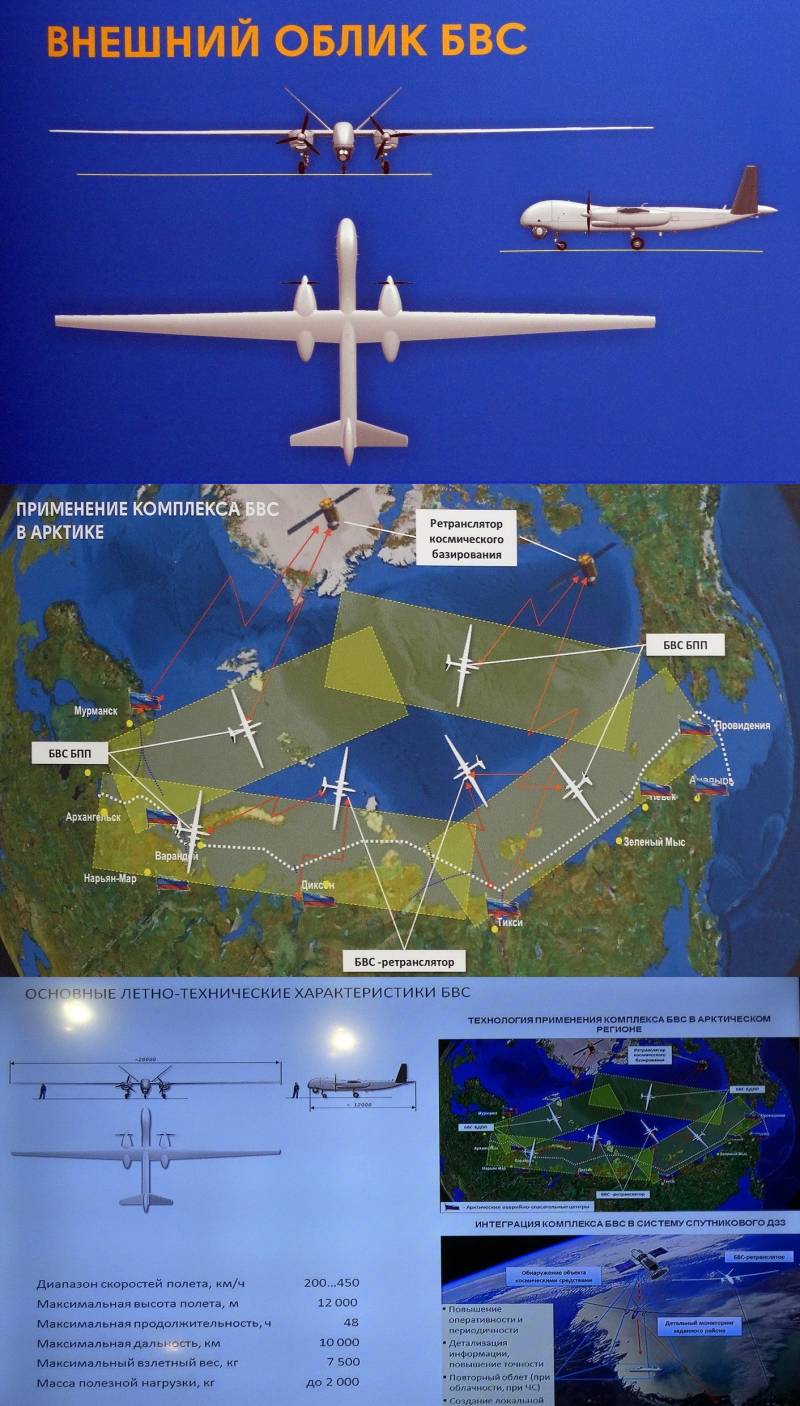 At the exhibition “Army-2020” JSC “Kronshtadt” was presented a model of the UAV “Helios-RLD”: with a turboprop engine with a pusher propeller, estimated mass of 4-5 tons, with a wingspan of 30 meters, designed for loitering for 30 hours at an altitude over 11,000 meters at a cruising speed of 450 kilometers per hour. 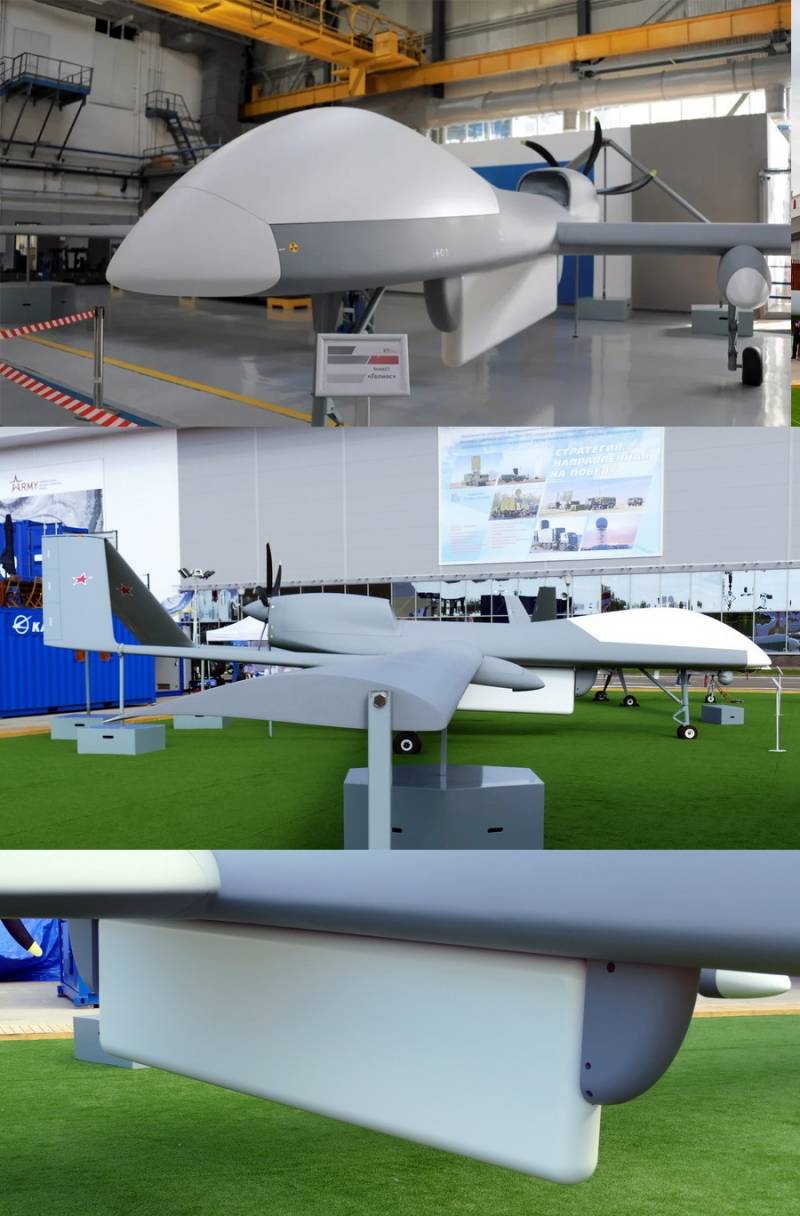 Taking into account the successful experience of Kronshtadt JSC in the development and putting into service of the Orion UAV, there are chances that the Helios-RLD UAV project can be implemented even earlier than the Altair UAV project. 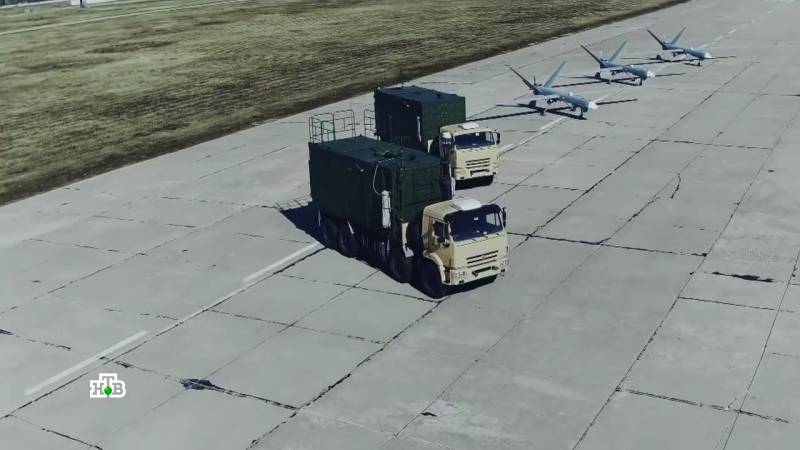 Despite the fact that UAVs “Altair” and “Gelius” are more likely to be middle-class UAVs (MALE), they are quite capable of performing the work of HALE-class UAVs of the RQ-4 Global Hawk / MQ-4C Triton type. At the same time, their capabilities in any case will be higher than that of the ancient Tu-95RTs, plus the absence of a crew on board, which allows, if necessary, to carry out combat operations with a higher degree of risk.

As mentioned earlier, the widespread introduction of UAVs is possible only if there is a global encrypted anti-jamming satellite communication with high throughput, sufficient to transfer huge amounts of data – radar and optical images for its subsequent analysis by operators. American experience speaks of the need for communication channels with a bandwidth of about 50 Mbit / s.

For a long time, the Russian Federation lagged behind the leading countries of the world in the development and implementation of middle and heavy class UAVs, and only in recent years there has been progress in this direction. Two main problems can be distinguished – the absence of the above-mentioned global encrypted jam-resistant satellite communications with high throughput and the lack of highly efficient economical aircraft engines. When solving these problems, one can expect a significant increase in the rate of emergence of new developments of Russian UAVs of the HALE and MALE class.

High-altitude and medium-altitude UAVs of the HALE and MALE class with a long flight duration can effectively replace the decommissioned strategic reconnaissance aircraft Tu-95RTs when solving the problem of searching for AUG and KUG, as well as issuing target designation of anti-ship missiles to them.

Compared to stratospheric electric UAVs, they have (at least for now) a higher payload, allowing them to deploy effective reconnaissance assets, and a higher speed, allowing them to quickly move into a given area and avoid meeting enemy fighters. The disadvantages include an order of magnitude shorter patrol time, but most likely these machines will perform in different classes, not replacing, but complementing each other.

The combination of global satellite reconnaissance and communications systems, stratospheric airships and UAVs, as well as “classic” UAVs of the HALE and MALE class will minimize the likelihood of enemy AUG and ACG evasion from detection.

However, this is not the end of the possibilities for detecting AUG and KUG – new reconnaissance and strike systems are on the way, capable of organizing a “driven hunt” for aircraft carriers.