Walking bunker in a combat position. The slab is lowered to the ground, the shoes are raised. Modern reconstruction by Type Proto / artstation.com

For several decades, the development of the idea of ​​a mobile firing point continued – a special armored vehicle suitable for quick delivery to a given position. Since a certain time, projects have been proposed for self-propelled products of this kind. One of the most interesting options for a mobile firing point was proposed in our country. It was developed by a team of designers headed by N. Alekseenko.

With the beginning of the Great Patriotic War, many enthusiasts, engineers and representatives of other professions began to offer their projects of military equipment and fire weapons capable of increasing the combat capability of the Red Army. Employees of the Magnitogorsk Iron and Steel Works were no exception. In the first half of 1942, they began to develop their own project, designated as “Walking bunker”.

Engineer N. Alekseenko was the initiator and chief designer. He was assisted by several colleagues at the plant. As consultants, the enthusiast attracted specialists from the Leningrad armored training courses for the improvement of command personnel, at that time evacuated to Magnitogorsk. In addition, Alekseenko was able to enlist the support of I.F. Tevosyan. Upon receiving a positive conclusion from the relevant department, he was ready to organize the construction of an experimental bunker.

In July, a package of documents on the “walking pillbox” was sent to the head of the Main Armored Directorate of the Red Army. GABTU specialists reviewed the project, pointed out its weak points – and did not recommend it for further development, not to mention the launch of production and implementation in the army. The documents naturally went to the archive.

N. Alekseenko’s project proposed the construction of a firing point with an original external and technical appearance. In fact, it was about an independent gun turret with an unusual propeller. Such a product could go into position, carry out a circular attack and, if necessary, move across the battlefield at low speed for short distances. 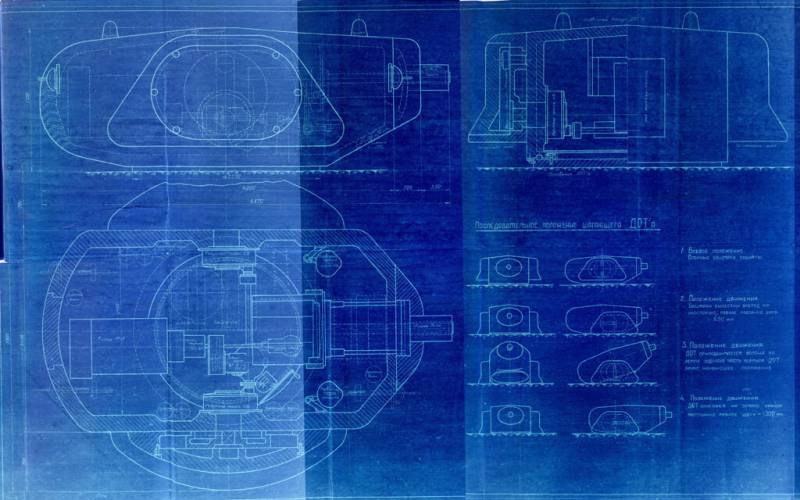 Project drawings. There are projections and sections, as well as a diagram of the method of movement. Graphics Worldoftanks.ru

The basis of the walking pillbox was an armored hull-tower with a rounded bow and stern parts and vertical sides. Low mobility requirements made it possible to use the most powerful armor, which gave a significant mass. The forehead and stern were supposed to have a thickness of 200 mm, the sides – 120 mm each, not counting the external propulsion units. In the roof, hatches were provided for access inside.

On the frontal plate of the turret, it was proposed to place an installation under a 76 mm gun of an unspecified type. A ball mount for the DT machine gun was provided on the side. It was proposed to carry out horizontal guidance by turning the entire bunker using a base plate under the bottom. For the vertical, it was probably planned to use separate mechanisms. In free volumes, it was possible to place up to 100 unitary rounds for a cannon and up to 5 thousand cartridges for a machine gun.

A GAZ-202 gasoline engine from a T-60 tank was placed in the aft part of the pillbox. Using a simple transmission, the engine was connected to an axle borrowed from a five-ton YAG-6 truck. The axles of the bridge were connected to an eccentric drive through which the side “shoes” were moved.

The bunker Alekseenko used the walking principle of movement with the help of the bottom of the hull and a pair of side shoes, known since the mid-twenties. With the engine running, the shoes had to make a circular motion, bearing the weight of the machine, lifting and carrying the body forward. Each such step, according to calculations, moved the object by 1.3 m. 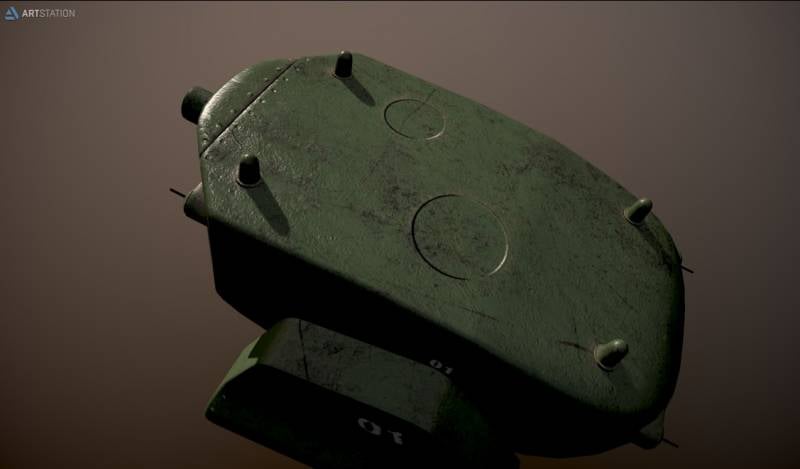 View from above. Modern reconstruction by Type Proto / artstation.com

The weight of the structure reached 45 tons, and the limited engine power made it possible to obtain a speed of no more than 2 km / h. Maneuverability was also extremely low. However, even such characteristics were considered sufficient for entering a position or for moving over short distances.

The Alekseenko’s mobile firing point had a number of positive features and advantages over traditional pillboxes. First of all, it is mobility and the ability to move between positions, incl. during the battle. The presence of such pillboxes could seriously simplify and speed up the organization of defense in certain sectors.

The project proposed the use of an armored hull with protection up to 200 mm. In 1942, no German gun could penetrate such armor from real combat distances. The defeat of howitzer or mortar artillery or air forces was not guaranteed due to their low accuracy. The base plate could be considered a weak point of the pillbox, but in the combat position it was reliably protected by the hull and the ground. Thus, the “Walking bunker” in terms of survivability and stability would not be inferior to traditional firing points.

The original project proposed the use of a 76 mm cannon. With the further development of the project, the design could be adapted for larger caliber guns. At the cost of an increase in mass and size, a mobile armored vehicle would increase firepower – with obvious consequences for overall combat effectiveness. 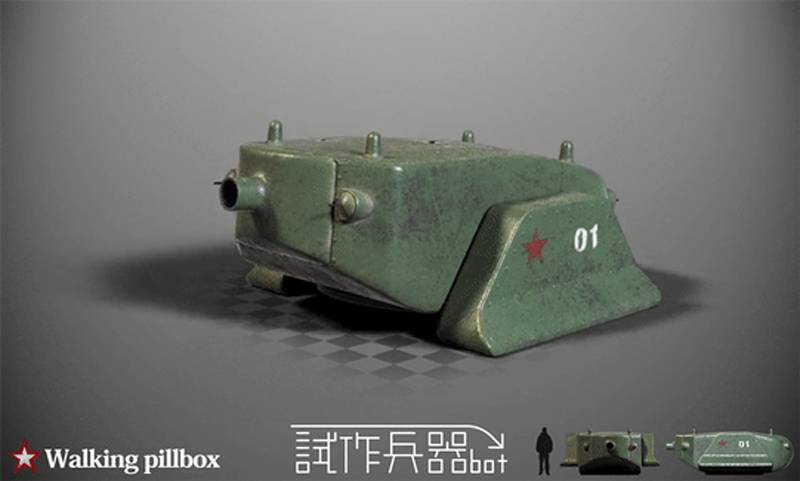 Start of movement: the shoes are lowered to the ground, the body begins to rise. Modern reconstruction by Type Proto / artstation.com

Both in the original and in the modified form, Alekseenko’s walking firing points were capable of becoming a formidable weapon and a serious problem for the enemy. In 1942-43. a line of defense with artillery, tanks and mobile pillboxes could successfully disrupt the advance of German troops in its sector, and it would be extremely difficult, if not impossible, to break through it under specific conditions.

However, there were congenital shortcomings, the correction of which was impossible or impractical. First of all, the GABTU noted the low mobility of the proposed armored vehicle. Even considering that he had to fight from the spot, the speed of 2 km / h was insufficient. One should also be wary of the low reliability of real bunker units facing high loads.

Difficulties with general mobility were also to be expected. Due to its low own speed, the Alekseenko pillbox would have to be transported to the place of application using heavy trucks. Own equipment of this class was absent at that time, and the volume of supplies of foreign cars under Lend-Lease might not cover all the existing needs.

In terms of ammunition, the Walking Pillbox with a 76-mm cannon was generally similar to the T-34 and KV-1 tanks. They also carried up to 100 shells, but had less machine gun ammunition. The possible duration of the battle of such a pillbox was short. To improve such characteristics, it was required to find volumes to increase the ammunition load or create them by increasing the hull. 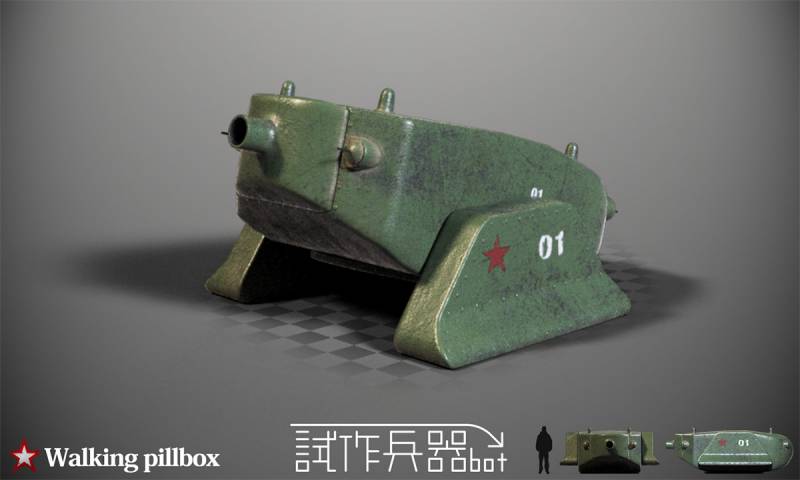 It is curious that the project of N. Alekseenko had not only technical limitations and problems. Russian historian of armored vehicles Yu.I. Pasholok, who first published materials on the project, believes that there was also an organizational factor. Firing points, incl. mobile were included in the scope of the engineering management of the Red Army, and not the GABTU. Accordingly, the submission of documents to the wrong department negatively affected the development prospects.

In case of receiving a positive conclusion and recommendations for construction and testing, the project could also face organizational and technical problems. “Walking bunker” in its design was seriously different from other products of the armored industry, and the development of its production would not have been easy. However, during the war years, our industry successfully solved many extremely complex problems, and N. Alekseenko’s project would hardly have been an exception.

During the Great Patriotic War, all the main directorates of the People’s Commissariat of Defense regularly received various proposals to improve existing models and create fundamentally new ones. A significant part of such proposals was deliberately unrealizable, but among the strange “projects” there were also reasonable ideas. It is to this category that the “walking bunker” designed by N. Alekseenko can be attributed.

However, the curious and worthwhile project was not ideal, and they did not even bring it to full development. Because of this, the original “hybrid” of the bunker and the tank went to the archive, and the Red Army continued to use firing points and armored vehicles of the traditional appearance until the end of the war.