Progress does not stand still. Despite all the difficulties associated with 2020, the American army continues the process of introducing new technologies and solutions designed to improve the combat capabilities of military personnel. We are talking not only about the latest weapons, but also about modern technological solutions.

In addition to new machine guns, models of small arms chambered for 6.8-mm rounds and smart grenades, the US continues to test military augmented reality glasses developed by Microsoft, as well as silencers for machine guns. All these developments are of great interest to the military in many countries of the world.

The US military has been testing various versions of integrated visual augmentation systems for quite some time. In October 2020, new versions of augmented reality goggles were being tested at the 82nd Airborne Division at Fort Picket, Virginia. These glasses are based on the HoloLens mixed reality glasses developed by Microsoft specialists. The military version of the glasses is characterized by increased durability and protective properties.

The Integrated Visual Augmentation System (or IVAS), created by Microsoft engineers, allows fighters to receive a lot of important information that is displayed directly on the surface of the glasses. Thanks to this system, soldiers receive situational awareness tools that help them navigate unfamiliar terrain, track other members of their unit regardless of the time of day, and communicate with each other. 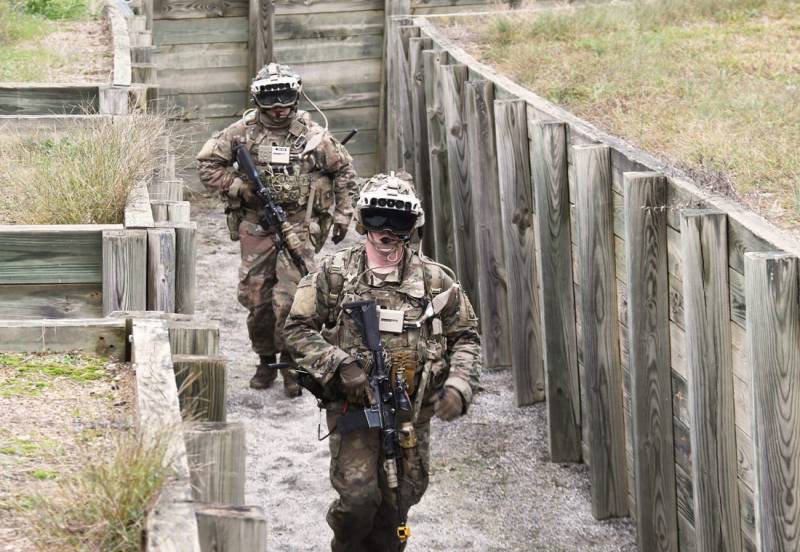 The trial operation of the first devices in the army should be completed by the end of 2021. During this time, the developers expect to bring IVAS to a version that can be launched into mass production. The system being developed for the US Army will be compatible with thermal imagers and night vision systems. In the future, “smart glasses” should be able to recognize faces, learn to distinguish civilians from the military, and also translate text from various languages ​​into English.

Already, the system makes it much easier for soldiers to navigate the terrain and work with maps. Downloaded maps of the area in two-dimensional and three-dimensional versions can be displayed on the sight. On this virtual map, fighters will be able to mark opponents, allies, various landmarks and points on the ground. It combines glasses with modern computer games. By selecting a point on the map, the fighter will be able to hide the graphic image, leaving only navigation information: a compass or an arrow with the direction of movement to the selected target and the distance to it. 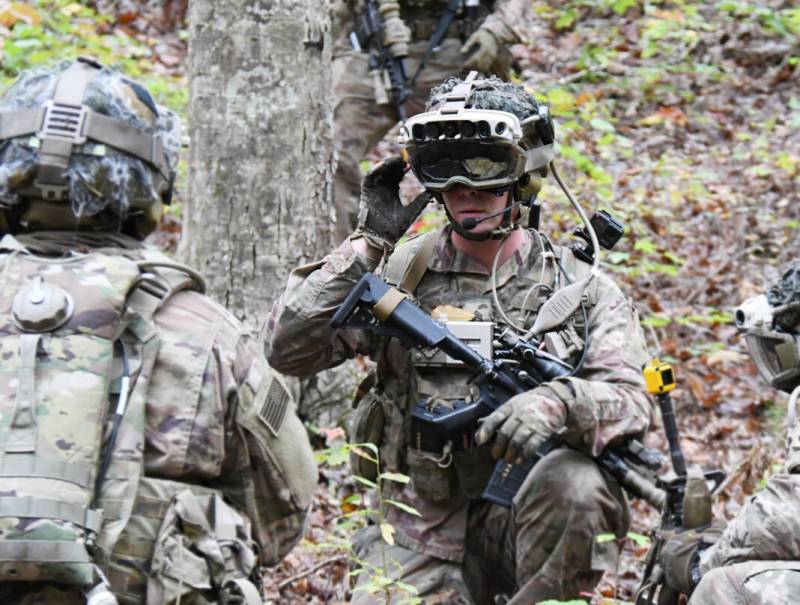 Another function of the augmented reality system should be a system for rapid detection and acquisition of targets. The goggles will be paired via Bluetooth with the scopes on the fighters’ small arms. It is planned that the system will help to improve the shooting accuracy of soldiers of various levels of shooting training, who will master the new aiming system.

During experiments in the 82nd Airborne Division, the fighters, after grinding into the new system, confidently hit targets from a conventional M4 assault rifle at a distance of 300 yards (274.32 m) from a standing position. At the same time, the paratroopers noted that it is quite easy to learn how to use the new system, and all the functions already available in IVAS are easy to use.

The American military considers the transfer of small arms to a new caliber of 6.8 mm to be a very important promising project. Currently, the US Army is in the final stage of evaluating weapons samples created as part of the NGSW’s advanced small arms program. As part of this program, a new generation assault rifle is being created, which is to replace the standard 5.56 mm M4A1 automatic carbine, as well as the 5.56 mm M249 light machine gun.

Textron Systems, General Dynamics Ordnance and Tactical Systems Inc. presented their prototypes of new small arms for the infantry squad, as well as ammunition for it. and Sig Sauer. These samples have passed the soldier touch point (STP) test stage. At the same time, the models differ in different designs and versions of the 6.8 mm caliber ammunition used. The US military plans to decide on a specific firm in the first quarter of the 2022 fiscal year. The winner will supply the troops with both weapons and ammunition. At the same time, deliveries are planned to begin in the fourth quarter of the 2022 financial year. 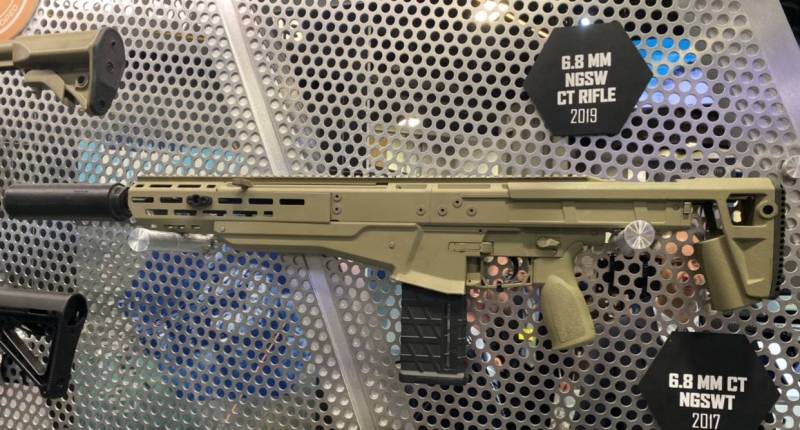 The weapon chambered for the new 6.8mm cartridge seems to be very promising. It will be received not only by ordinary infantry units, but also by elite units of the American army. First of all, special forces units, such as the 75th Ranger Regiment or special operations units of all types and branches of the military.

A feature of the new 6.8-mm ammunition can be a polymer sleeve, which will have a positive effect on the weight of the ammunition carried by the soldiers. In addition, the new cartridges will be noticeably more powerful than 5.56 mm ammunition, in no way inferior in ballistics to standard NATO cartridges of 7.62×51 mm caliber, and most likely even surpassing them.

Much attention in the American army is paid to the development of small grenade launchers (including grenade launchers) and ammunition for them. The task of hitting targets in the folds of the terrain and behind various natural shelters and obstacles on the battlefield seems to be very important. Currently, at least two infantrymen in each American squad are armed with M4A1 carbines with 40mm M320 grenade launchers. The grenade launcher, which was put into service in 2009, is a fairly good example of a weapon, but the US military is not abandoning its attempts to get more complex and high-precision systems from the industry.

Over the past decade, the US military has tried to improve the capabilities of fighters in the fight against targets hidden in the folds of the terrain or behind shelters using the advanced XM25 Counter-Defilade Target Engagement System – a semi-automatic grenade launcher for 25-mm high-explosive fragmentation ammunition with air remote detonation. Initially, the system was considered very promising and made a splash among the American infantry. However, the failure to meet the deadlines for the development and supply of weapons, as well as significant financial costs for the manufacture of promising weapons and ammunition for them (one shot cost $ 50) put an end to the program. It was officially closed in 2018. 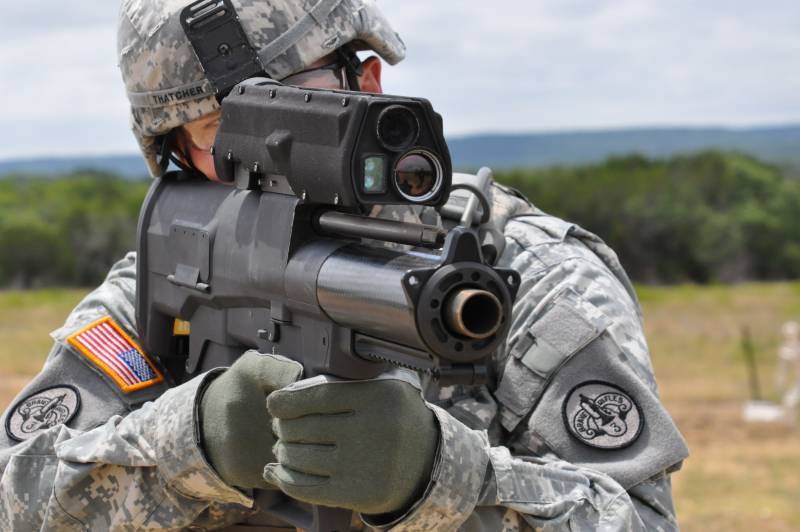 The American military expects to receive new grenades and grenade launchers as part of the development of the PAAC program – a platoon configuration of weapons and ammunition, which is planned to be completed by 2024. At the same time, the US military plans to switch to new weapons systems capable of fighting the enemy in the folds of the terrain until 2028.

New machine guns to replace the M240 and M2

In November 2020, it became known that the US military expects to receive new machine guns to replace the veteran veterans, which today are the 7.62 mm M240 and the famous large-caliber 12.7 mm M2. The M2 machine gun of the John Browning system, created back in 1932, has been repeatedly modernized since then, having gone through all the wars in which the American army participated. The largest conflict with his participation was the Second World War.

Officials of the American army say that the decision to create new single and large-caliber machine guns will be finally made after evaluating the NGSW program, as well as the capabilities of the new 6.8-mm machine gun being created under this program.

The final decision on how the next generation machine guns should look like has not yet been made in the United States. 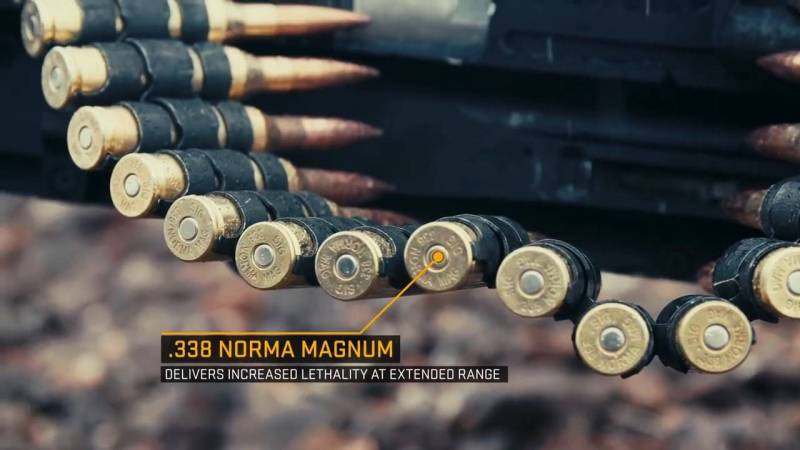 At the same time, it is known that the US Marine Corps, together with the army, are working on a new machine gun, but they are also considering a model being developed by the US Special Operations Command chambered for .338 Norma Magnum (8.6×64 mm). In the future, it can replace all M240 machine guns in the Marine Corps companies, and possibly in the army units.

The new cartridge will make it possible to confidently hit targets at ranges of up to 1,500 meters, while the effective firing range of the 7.62 mm M240 machine gun is estimated at 800 meters.

In any case, the decision on the new .338 Norma Magnum machine gun will be made on the horizon for the next 3-5 years.

If the final decision on the appearance and ways of creating new machine guns has not yet been made, then work on improving the existing models is still ongoing.

One of the options for modernizing the 7.62-mm M240 machine gun can be the installation of a silencer on it. The project looks at least ambitious. As part of the maneuvers carried out in October, the US military tested a silencer for the M240 machine gun, developed by specialists from the company Maxim Defense.

Suppressors from other companies were unable to cope with the sound and bursts of shots from the main American infantry machine gun. 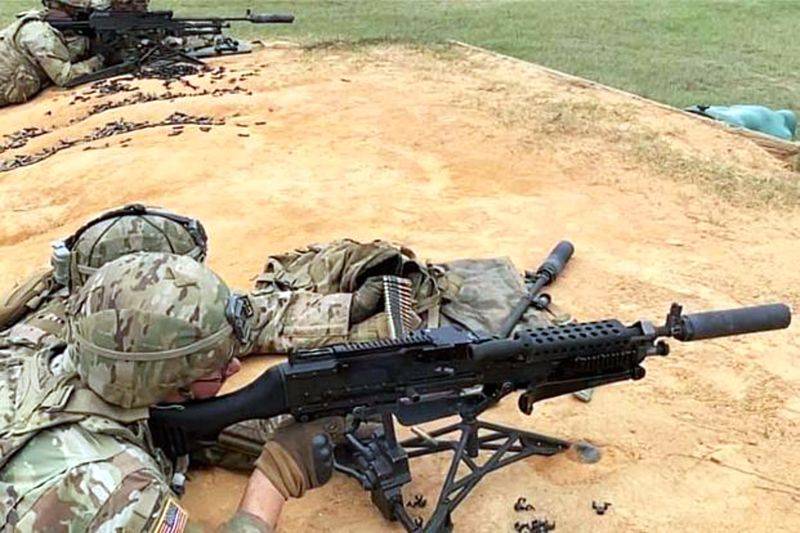 Tests of the muffler for the M240 machine gun

Naturally, the silencer provided by Maxim Defense will not make the M240 a ninja weapon. But it will become more difficult for the enemy to determine the location of the machine-gun point in battle. And crew members and commanders will be able to hear each other when giving orders and adjusting fire.

It will be possible to issue commands and adjust machine gun fire without resorting to hearing protection.

The tests of the new muffler should last until March 2021. After that, a test report and recommendations for further improving the model will be prepared.

If all goes well, this project may eventually grow to mass production.