In the early fifties, the Soviet defense industry developed several new types of flamethrower weapons for the ground forces. One of them was the LPO-50 light infantry flamethrower. It entered service with the Soviet army, and was also supplied to foreign countries and produced under license.

At the beginning of the fifties, a significant number of ROKS-2/3 knapsack jet flamethrowers from the times of the Great Patriotic War remained in our army. The combat and operational characteristics of this weapon no longer met the requirements of the military, which led to the emergence of a new product LPO-50. By the mid-fifties, this flamethrower went into a large series and replaced outdated samples.

LPO-50 consisted of a knapsack with cylinders and other equipment, a cannon gun and a gas-resistant hose connecting them. Liquid “ammunition” was poured into three cylinders with a capacity of 3.5 liters. In the upper part of each cylinder there was a filler neck, into which the propellant charge was then placed, as well as a valve for relieving excess pressure. Under all three cylinders there was a common manifold through which the fire mixture was dispensed into a hose and a gun. 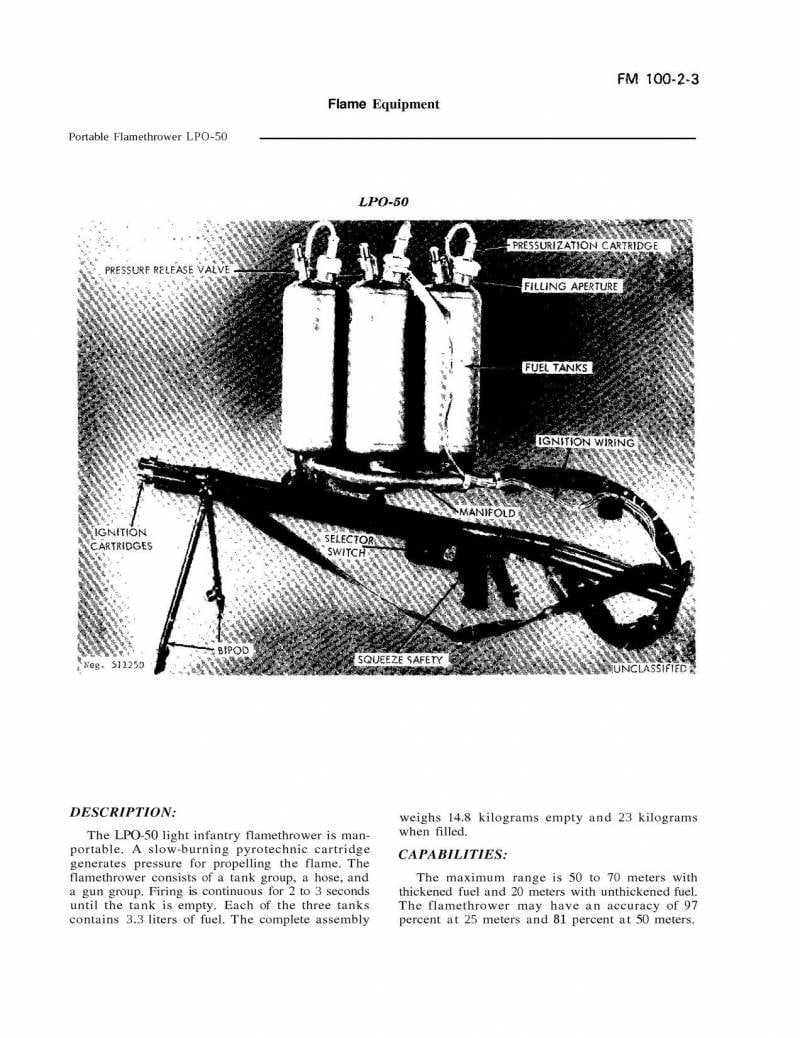 Flamethrower LPO-50 in the US Army handbook on Soviet weapons

The fire hose was made in the form factor of a rifle with a stock. On the muzzle of the barrel, three chambers were placed under the PP-9 squibs – one for each cylinder. A battery for the electrical control system was placed in the butt. The shot was fired using a trigger: it supplied an electrical impulse to the propellant and squib ignitors. There was a switch for prioritizing the use of cylinders. An automatic fuse was also present.

In the combat position, the LPO-50 weighed 23 kg. The main units were not compact. So, the gun, excluding the hose, had a length of 850 mm. The use of fire mixtures of different types with different characteristics was envisaged. Without reloading, the flamethrower could fire three shots – one from each cylinder. The duration of one shot was 2-3 seconds. Depending on the viscosity of the mixture, the firing range reached 50-70 m. A tailwind could increase the range of the mixture.

For your own army

LPO-50 was developed to re-equip the Soviet army and, having passed all the checks, was put into service. Serial production was established at several enterprises. According to various estimates, over the years of production, up to several tens of thousands of such flamethrowers were produced. With their help, it was possible to carry out a full replacement of outdated systems. 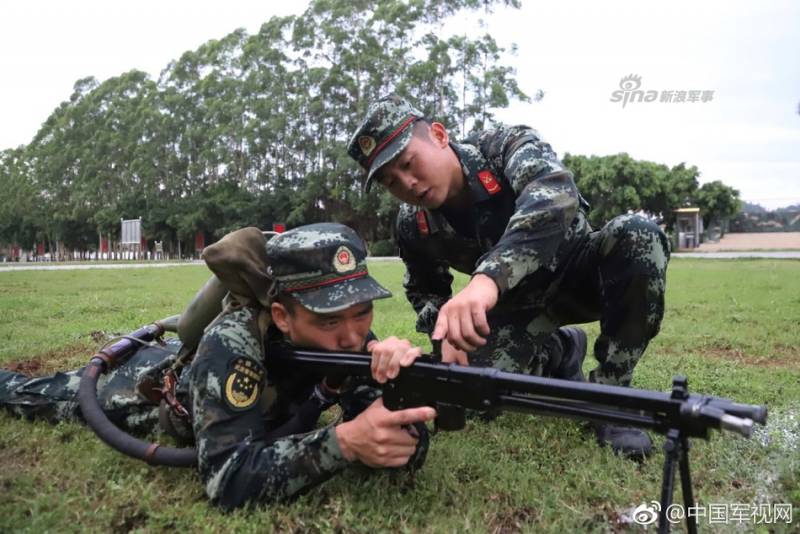 LPO-50 were the main weapons of individual companies of light infantry flamethrowers. In a combined arms battle, platoons and squads of such a unit were to be attached to motorized rifle units. The flamethrowers were supposed to accompany the rifle platoon / squad, but move behind it. When a target was found that was resistant to attacks from other infantry weapons, flamethrowers were used. In this case, the flamethrowers, using camouflage, had to go out in front of the shooters to the line of using their weapons 40-50 m from the target.

With all its advantages, the LPO-50 product retained all the characteristic drawbacks of knapsack jet flamethrowers. In a real battle, such weapons were dangerous not only for the enemy, but also for their own crew and the surrounding soldiers. In this regard, from a certain time, there were searches for alternative ways to increase the firepower of the infantry.

In 1975, the RPO “Rys” infantry rocket flamethrower was adopted for service. The advent of this weapon made the LPO-50 unnecessary. Soon he was removed from service, and the army switched to a modern model. The decommissioned LPO-50 were sent for storage. Often they were transferred to friendly states. 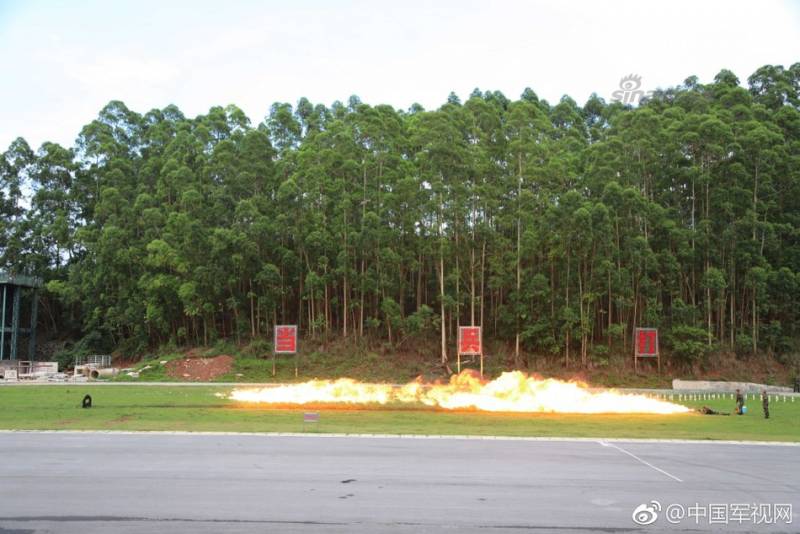 In the fifties, the USSR was actively sharing arms and technologies for their production with the PRC. Together with other products of the People’s Liberation Army of China, several thousand LPO-50 flamethrowers were handed over. Then they helped with the launch of production at local enterprises. Chinese flamethrowers received the designation “Type 58”.

The Type 58 light infantry flamethrower did not differ much from the Soviet product. At the same time, there could be some minor changes due to the specifics of local production. The architecture and principles of work did not change, but new compositions of fire mixtures were regularly developed and introduced.

In the seventies, a deeply modernized Type 74 flamethrower was adopted. It was distinguished by the presence of only two cylinders of increased volume and an improved gun. The flamethrower has become a little lighter, the volume of the jet has grown to 4 liters, and the ammunition load has decreased to two shots. Fire characteristics depended on the type of mixture used. 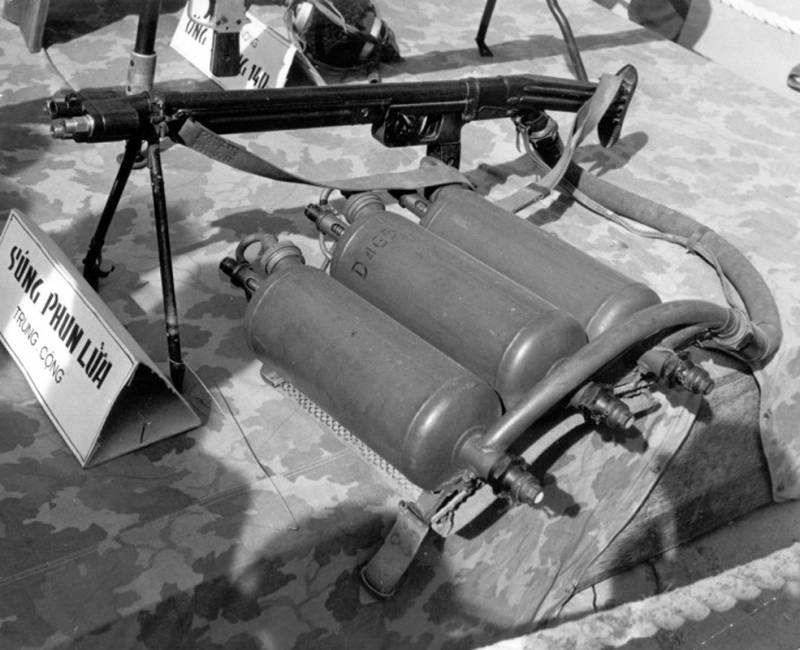 “Type 74” is still in service with the PLA and the People’s Armed Militia. Such weapons are regularly used in various exercises and demonstration events – and always attract attention. It is curious that the PRC eventually left in service with only light infantry flamethrowers. Together with LPO-50 in the fifties, heavy TPO-50s were supplied and produced under license, but they have long been written off.

Since the fifties, LPO-50 flamethrowers have been actively supplied to friendly foreign countries. By the early to mid-sixties, such weapons appeared in all countries of the Warsaw Pact. Foreign armies were often handed over not only modern LPO-50, but also obsolete ROKS-2/3 products. In some cases, not only finished products were transferred, but also documentation for production. So, Romania produced its own flamethrowers.

There were also deliveries outside the ATS. For example, from the mid-sixties LPO-50 of Soviet and Chinese production, along with other infantry weapons, were actively supplied to North Vietnam. It is known from various sources about the use of such weapons in several operations with obtaining acceptable results. However, flamethrowers were not widely used due to the shortage of suitable flammable liquids. 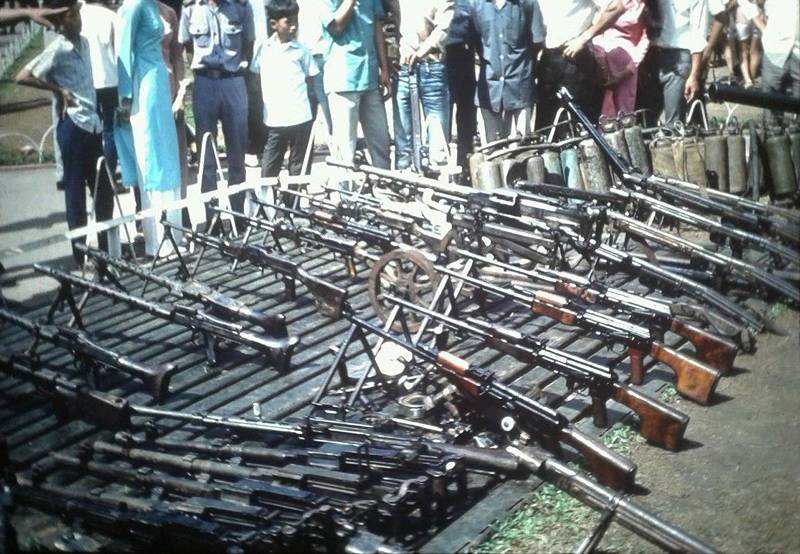 Exhibition of trophies in Saigon, 1972. In the background, an entire battery of flamethrowers. Photo manhhai / flickr.com

In the same period, the Soviet LPO-50 ended up in the armies of the Middle Eastern states. Arab countries have limited use of such weapons in battles with the Israeli army. The specifics of the conflict did not contribute to the widespread use of flamethrowers – this time due to the high risks and limited combat effectiveness.

An extremely interesting incident took place on December 13, 1989 in Northern Ireland. On this day, a group of fighters from the Irish Republican Army attacked a British checkpoint in Darriyard. The attacking side used machine guns, machine guns, grenades and an LPO-50 flamethrower. Having made their way to the territory of the checkpoint, the attackers used fire mixture against the command post.

Subsequently, it was established that the IRA had six LPO-50 flamethrowers at its disposal. How and where they came from is unknown. There are several versions, incl. on assistance from third countries interested in causing damage to the UK. 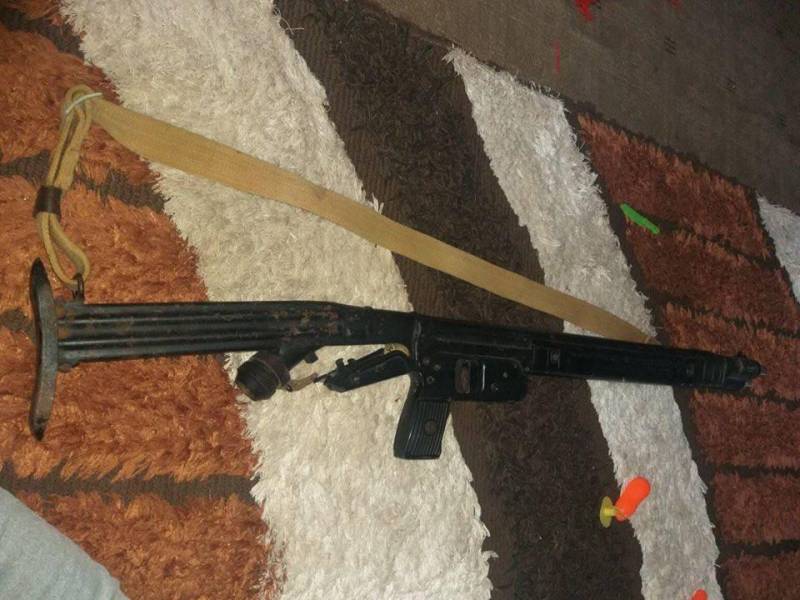 As far as is known, most of the operators have long removed the LPO-50 flamethrowers from service and abandoned the very class of jet flamethrowers. However, several armies continue to operate these weapons. There are regular news on this subject, and each time they attract the interest of the press and the public.

China shows its Type 74 flamethrowers, created on the basis of LPO-50, with enviable regularity. It is very likely that this weapon will make headlines for a long time to come. Nothing says about its imminent removal from service, and we can expect new photo and video materials from exercises and other events.

In August of this year, a gun from an LPO-50 flamethrower without other units was unexpectedly found in Libya. Previously, there was no information on the supply of such weapons to the Libyan army. In addition, no other flamethrowers of this type were found in the country. It can be assumed that the incomplete (at the moment) product came to Libya from an unknown third country in recent years, against the background of general instability. 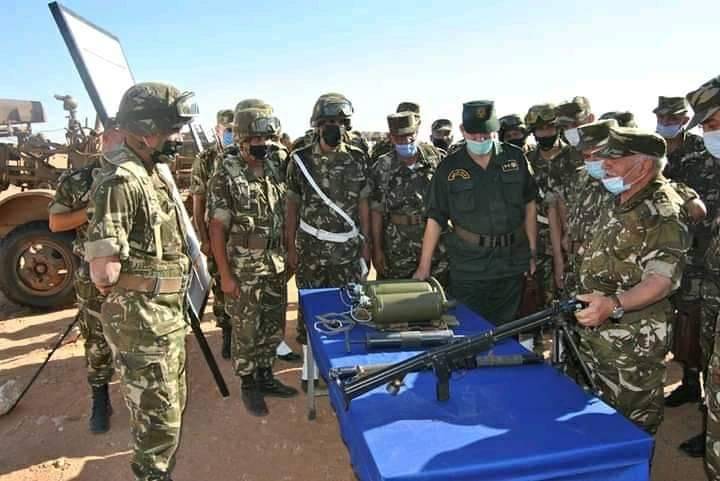 On October 12, in the Algerian city of Tindouf, a ceremony was held to mark the start of the new year of military training. During this event, the military district command was shown the material part of the troops, incl. infantry weapons. Together with other samples, the LPO-50 flamethrower was used in the exhibition. Apparently, such weapons have long gone out of active use, but are still stored in arsenals, at least for participation in exhibitions.

At one time, jet flamethrowers were widespread, but several decades ago, the process of abandoning them began. First, developed countries switched to more successful weapons, and then their allies did the same. However, flamethrowers have not yet completely gone out of service and have even received limited development.

The main operators of jet backpack flamethrowers remain the army and internal troops of China. They have their own views on the development of infantry weapons, in which there is a place for similar outdated systems. At the same time, it should be noted that Soviet developments are at the heart of the current models and tactics of use. All this shows that the LPO-50 light infantry flamethrower was a successful and effective model – despite all the limitations and problems of its class.