Even ancient armies faced the need to cross various water barriers. One of the oldest options for military bridge equipment appears to be the pontoon bridge. Pontoon crossings in the form of a “boat bridge” have been used since the days of Ancient Rome and Ancient Greece. So, during the First Dacian War in 200 BC, Roman military engineers coped with the task of building a large pontoon bridge over the Danube.

The pontoon bridge built by the Romans rested on boats. In their simplest form, pontoons in those years were a kind of set of boats that were shallow in the water, which were interconnected, a deck or flooring was installed on top of the boats. Such a pontoon was erected on rivers and canals and used to transport troops and cargo. The reality is that since then there have been no significant changes in the organization of pontoon crossings. The changes mainly affected the materials used and the overall load-carrying capacity of the structures.

Such lightweight pontoon bridges proved to be effective engineering equipment, widely used by the British army, as well as by the armies of the Dominions. For example, Canadians, during the Second World War in various theaters of military operations. Used these transportable and easily installed structures and the US military.

Folding boat equipment is the name of a British transportable bridge system that could be used as a pontoon bridge, raft, ferry, or general purpose boats. The design, which received the British designation Folding Boat Equipment (FBE), was introduced in the late 1920s and fully satisfied the needs of British military engineers. 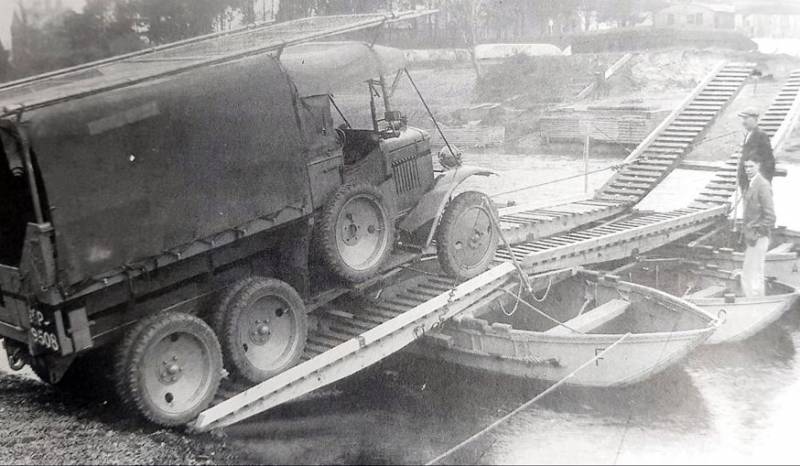 This engineering equipment was mass-produced in Great Britain all the pre-war years and was modernized several times. By the beginning of the war, there were three modifications of folding boat equipment in service.

These lightweight pontoon bridges were widely used by the British military throughout the Second World War, both in the European theater of operations and in Asia. Along with modular bridges and Bailey pontoons, the FBE lightweight pontoon bridges provided invaluable assistance to the Allied forces in the liberation of Western Europe from fascism.

Despite the fact that the design of the FBE was extremely successful and was widely used by military engineers of the British and Canadian armies, as well as by American troops, the general public knows little about these amphibious means.

The Folding Boat Equipment was adopted as early as 1928. The lightweight pontoon bridge was designed to provide the fastest possible transfer of light vehicles, artillery and infantry to the other side of water bodies in order to immediately support assault teams. Deploying such pontoon bridges on the ground took much less time than deploying heavy pontoons capable of supporting the weight of tanks and other heavy tracked vehicles. 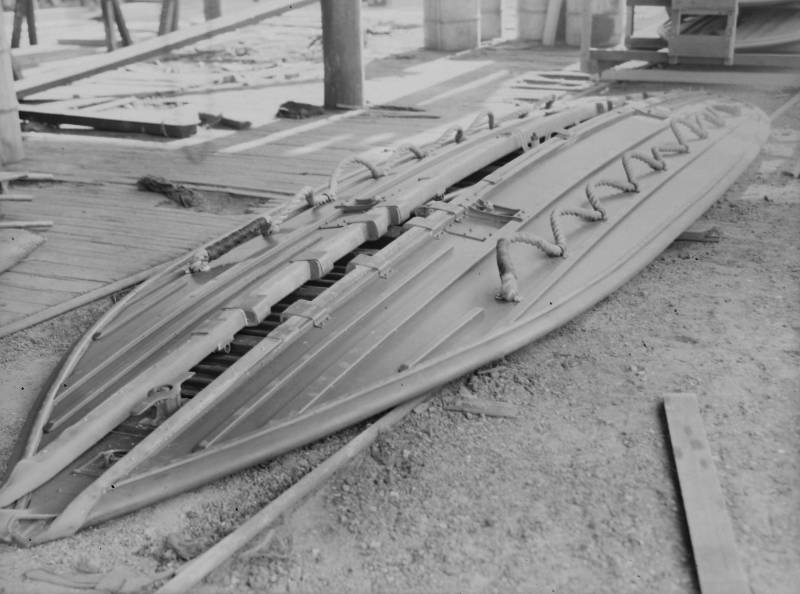 In the mid-1930s, the design was slightly improved. The new version received the designation Folding Boat Equipment Mk. II.

The difference with the Mark I variant was minimal: the bridge girders were wider and the wooden conveyor belts of the ramp were replaced with steel ones. At the same time, the carrying capacity of the raft being assembled has slightly increased.

The most common version was the Mark III, created in 1939 and actively used throughout the war years. Steel guides, supports and overpasses introduced into the structure made it possible to organize light ferry bridges capable of carrying equipment weighing up to 9-10 tons.

The basis of the entire set of landing equipment was made up of folding boats, which gave the name to the entire set. A feature of the project was that when folded, the boats were almost flat, which ensured ease of transportation and storage. Each boat consisted of three half-inch (1.27 cm) thick plywood panels interconnected with waxed canvas. With the sides raised and struts fixed, the boat received the required structural rigidity.

When used as an ordinary boat, it could easily ferry 16 soldiers with personal weapons and equipment to the other side. As a rule, the boat was propelled by oars, but the Coventry Victor outboard gasoline engine, which develops a power of 7.5 liters, could also be used. with. In addition, the FBE kit also included a rubber reconnaissance boat. 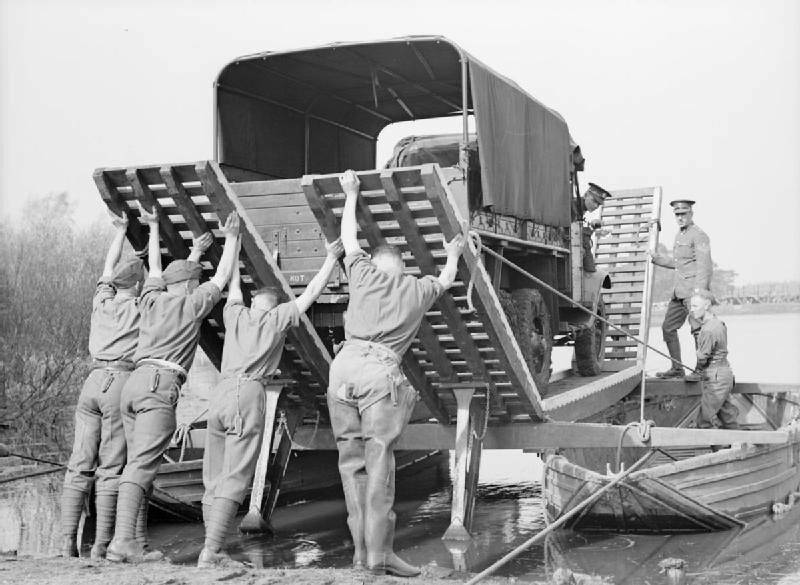 Fence with ramps from the Folding Boat Equipment set

It was easy to create a cargo raft or ferry from two boats.

A cargo raft with ramps was assembled from two boats, which were interconnected by two wooden beams, laid and fixed across the boats along their entire width. The ramp conveyor belts were laid on these beams, the belts were 14 feet (426.7 cm) long. The transoms were equipped with 9 feet (274.3 cm) lifting ramps.

Such a raft had a carrying capacity of three tons and could transport wheeled vehicles to the other side, which independently entered and exited the raft. This was convenient, since in some cases any engineering work to prepare the coastal strip was excluded. This means that the transfer of equipment could be carried out as soon as possible.

The raft was driven either by oars or outboard motors. Also, using such a raft, it was possible to organize a ferry crossing. According to the standards, the raft was assembled in five minutes. at night the standard doubled. 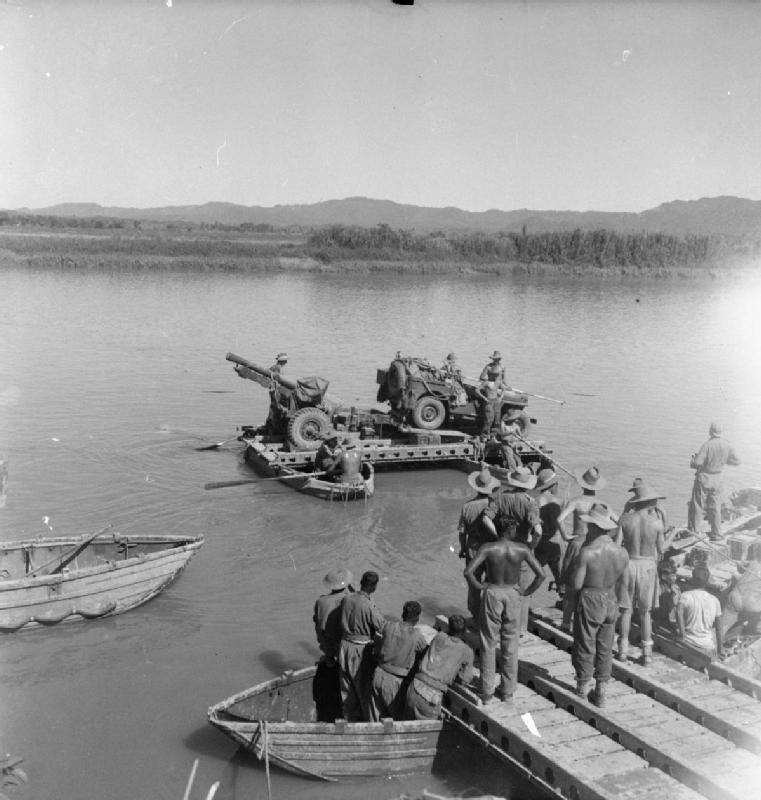 The second option for the construction of the raft provided for the arrangement of the deck.

The deck raft increased the carrying capacity to 4.5 tons (in the Mk. III version – up to 5.2 tons). The design also used two boats, but the deck was placed perpendicular to their length (in the version with ramps, transport belts went along the boats).

The deck decks were made of wood using Douglas fir. Despite the increase in carrying capacity, this option was less flexible and more difficult to operate. Since the loading and unloading of equipment required the presence of a pier, or assembled ramps on both banks.

Several interconnected FBE rafts formed bridge spans, which, with the addition of overpasses, turned into a light ferry crossing. It was possible to increase the carrying capacity of the crossing by articulating two boats.

The maximum lifting capacity of the pontoon bridges, assembled using the FBE Mark III kits, has reached 9-10 tons. They had to withstand a fully loaded 3.5-ton truck and a 25-pound howitzer cannon with a tractor. 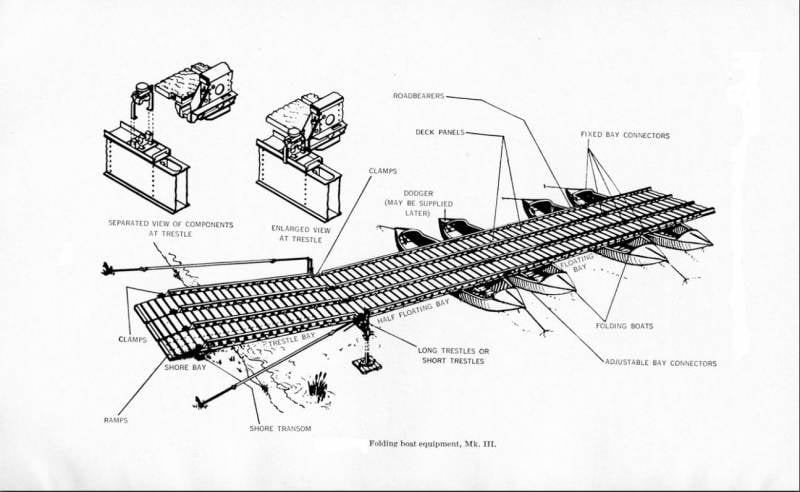 Diagram of a light pontoon crossing from the FBE Mk. III

Collapsible boat equipment, developed during the interwar period, performed well during the Second World War. The equipment was produced throughout the war years without significant changes and remained in service even after the end of hostilities.

Among other things, even in the pre-war years, FBE kits were used in the UK and for civilian purposes. For example, during the flood in Fenland in 1937. 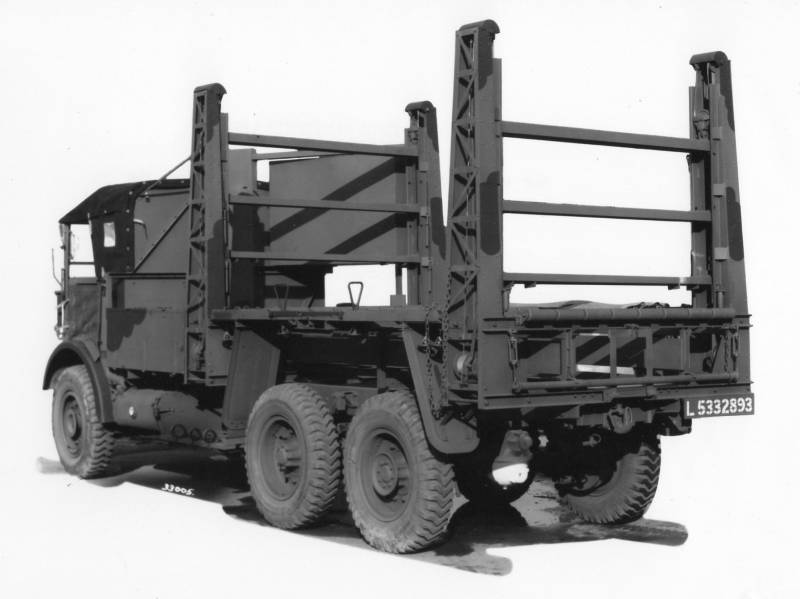 Albion BY5 truck converted for the transport of folding boats.