Liebherr was originally a peaceful company. In 1949, its founder, Hans Liebherr, presented the first development – the fast-erected tower crane TK 10. Such equipment was in great demand in war-torn Germany and over time became one of the main sources of the company’s income. Later, excavators appeared in the range of products, and in 1954 Liebherr unexpectedly organized the production of refrigerators. By 1977, when the first LTM 1025 wheeled crane appeared, the German company was already producing many construction machinery and aircraft equipment. But it was the LTM 1025 that became the starting point for the military career of Liebherr equipment: the first military cranes were created on the basis of this machine. Since 1977, the company has assembled about 800 cranes with a lifting capacity from 10 to 500 tons for the military of different countries. This, of course, is not much: in 2017, for example, Liebherr released its 50,000th wheel loader.

1984 was marked by the most important event for the company: the deployment of its own production of diesel engines for construction equipment. Now Liebherr’s experience in the field of engine building has come in handy for KamAZ. The newest K5 tractor, which is assembled from various foreign components, is equipped with a six-cylinder KamAZ-910 engine – a copy of an engine from Germany. The Germans with domestic engineers converted the 12-liter D946 to the needs of long-haul tractors and localized production in Russia. By the way, without Liebherr engines, KamAZ’s factory teams would not have achieved such significant success at the Dakar rally. Now the competence of the German company allows independently developing and producing diesel engines, the working volume of which reaches 100 liters, the number of cylinders is up to 20, and the capacity exceeds 6000 liters. with. 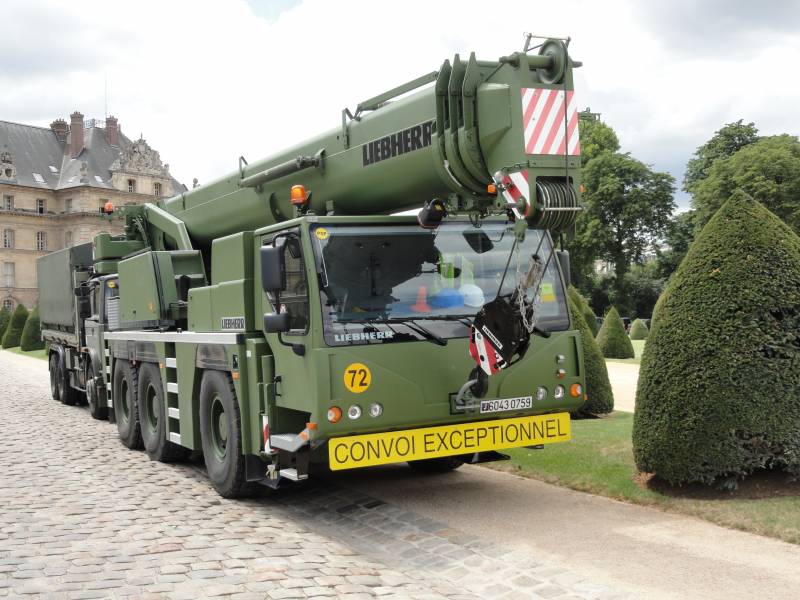 In the application to the military industry, the most interesting are wheeled cranes supplied to the armies of NATO countries. So, since 2002, the French have been operating 50 Liebherr LTM 1055-3.1 machines with a 6x6x6 wheel arrangement – an all-wheel drive three-axle crane with all steerable wheels. Five cars left for France with armored cabins. The lifting capacity of the crane is 50 tons, while its own curb weight does not exceed 36 tons. Since military production is not a profile for Liebherr, the car for the French army turned out to be only a khaki-painted civilian crane with a telescopic boom. LTM 1055-3.1. This is a road vehicle that is not adapted to rough terrain. The crane has a ridiculous ground clearance and tires without developed lugs. A distinctive feature is a fully steerable chassis: the rear wheels, depending on the speed, turn either synchronously with the front wheels or in antiphase. But this is only one of the modes of operation of the steering, the rest will be discussed below. Steering rear wheels allowed the civilian wheeled crane to maneuver in narrow European streets no worse than delivery trucks, and the French military got this ability as a bonus. 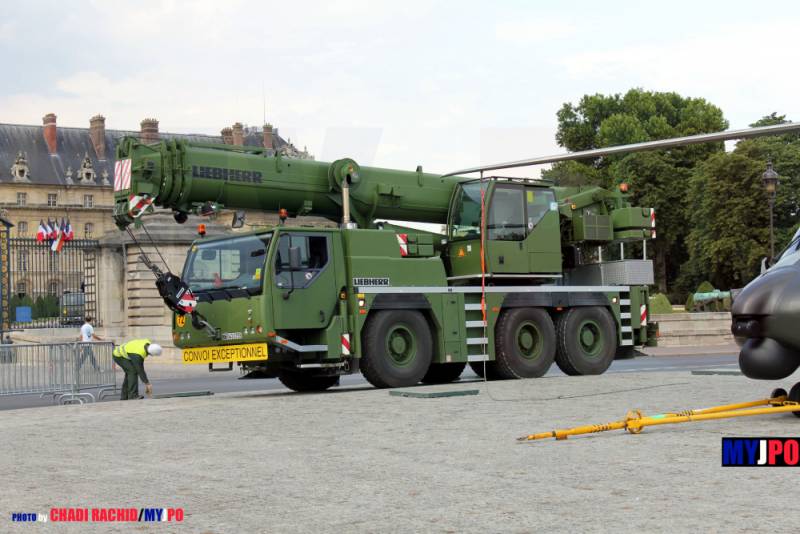 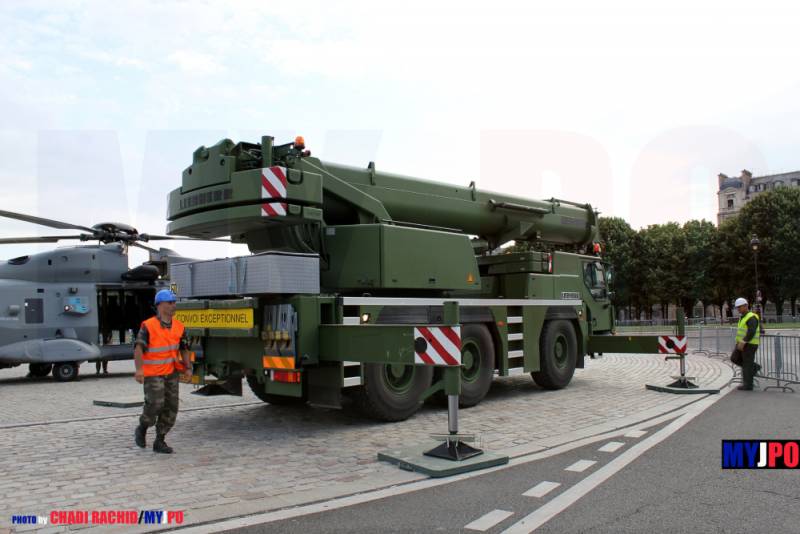 Six years ago Liebherr supplied the Swiss Army with 4 three-axle LTM 1055-3.2 cranes with a lifting capacity of 55 tons. Together with the contract for the construction of machines, the Germans developed a set of equipment for cranes for the quick assembly of temporary bridges. By the way, it is in Switzerland in the city of Bühle that the Liebherr headquarters have been based since 1983. Therefore, some people mistakenly consider the company to be originally Swiss.

71 crane for the Bundeswehr

Since 2017, Liebherr has been fulfilling a large Bundeswehr order for 71 armored cranes with a total value of 150 million euros. It is easy to calculate that the cost of each vehicle exceeds 2 million euros on average, which is about three times cheaper than the Leopard 2 main battle tank. The company plans to complete the supply of cranes to the army by December 2021. Of the total order, 38 vehicles are assembled in the G-LTM 1090-4.2 version, which differs from the civilian ancestor only in ceramic armor panels, a cabin increased by 250 mm and painting. The armor protection of the driver’s and crane operator’s cab was developed by Rheinmetall (there is no open data in the press about which calibers this armor saves). 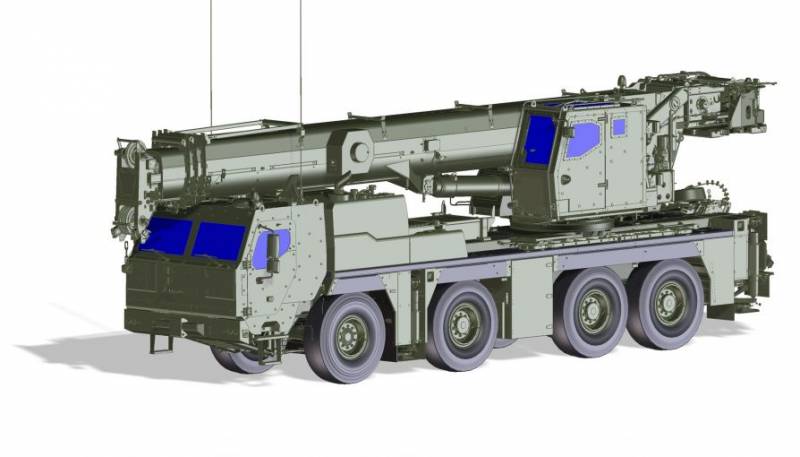 The G-LTM has four axles (three of them driving) with all steer wheels. From the civilian version, the crane inherited a complex steering system with five modes of operation. On the front two axles, the wheels are controlled by the usual mechanical drive, and the third and fourth pair of wheels are equipped with electrohydraulics. At first glance, a similar system was implemented on the domestic ZIL-134, but our missile carrier had only the first and fourth pair of wheels guided. And then everything at once, and even according to five algorithms. It is not entirely clear why the military crane needs such difficulties, but the Bundeswehr did not refuse this. In accordance with the algorithm of the first program, the rear wheels are steered on public roads and depends on the speed of the crane. Everything is simple here: the faster the car goes, the less steering. When a certain speed is set, the rear wheels become strictly straight during any maneuvers. The second program is required for a minimum turning radius of 10.2 meters, which is less than that of some passenger cars. The rear wheels turn in antiphase to the front wheels. The third program is “Lateral motion” – all wheels are turned in the same direction and allow the crane to move diagonally. The fourth work program helps to avoid skidding: for this, the rear pairs of wheels turn synchronously in antiphase with the front ones, but at smaller angles. Finally, the fifth algorithm allows independent control of the rear axle wheels by separate buttons.

The G-LTM is equipped with a 449 hp 6-cylinder diesel engine. with. and is capable of lifting a load of 36.6 tons with a telescopic boom. Together with the crane, the military of the Bundeswehr got two proprietary Liebherr technologies: VarioBase and VarioBallast, designed to work in cramped urban environments. The first technology makes it possible to extend the outrigger legs to different distances independently of each other. VarioBallast is the movement of the crane’s ballast by means of hydraulic cylinders: the farther it moves, the greater the weight of the load the crane can lift. On the one hand, this allows the use of less massive ballast, and on the other hand, it does not hamper traffic in narrow lanes. 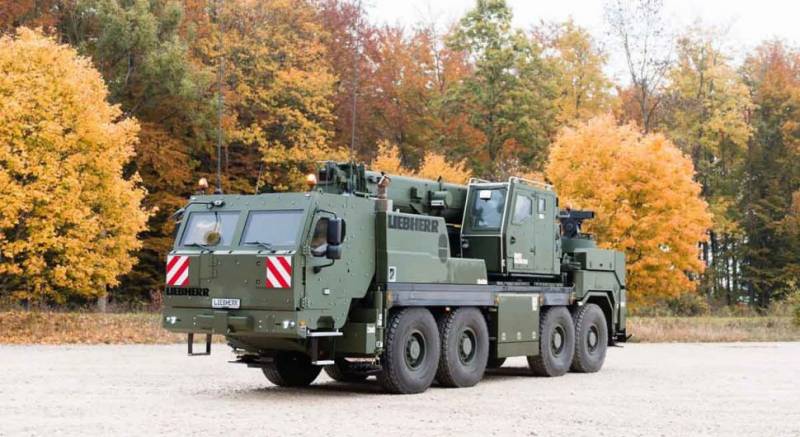 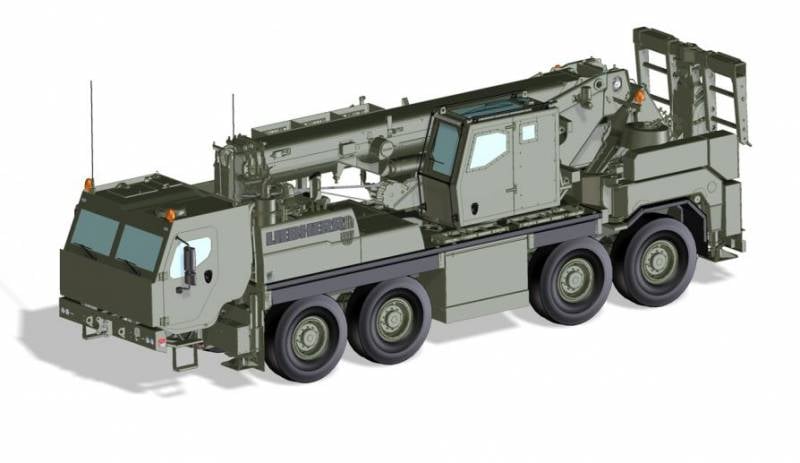 The second part of the contract with the Bundeswehr consists of 33 armored cranes Liebherr G-BKF (Geschütztes Bergekranfahrzeug). This vehicle already differs from its civilian counterparts in its ability to evacuate equipment weighing up to 16 tons in a semi-submerged state. For this, a special lodgment is used in the stern, on which the evacuated wheeled vehicles are fixed. Towing on a rigid hitch is also possible. Two winches are mounted on the crane: Rotzler TR 200 (force – 200 kN, rope length – 75 m) and Rotzler TR 80 (80 kN and 49 m, respectively), which can be used simultaneously. The maximum weight of the load lifted by the telescopic boom of the crane is limited to 20 tons. G-BKF allows the operator to use the crane and winches at the same time, which significantly expands the functionality of the machine. For example, a machine can free a jammed vehicle by simultaneously lifting and pulling it. The crane operator can control the operation of the equipment remotely from a remote control that communicates with the machine via Bluetooth.

Despite the external similarity with the aforementioned G-LTM, the evacuation crane is built on an all-wheel drive MAN platform with a 544-horsepower D946T diesel engine. Machine control algorithms are built around five programs in complete analogy with the rest of Liebherr technology. The suspension of each axle is dependent with the ability to individually change the height: the car can even roll forward / backward, left / right, and also lower on its belly like domestic BMDs. The crane is also equipped with removable ceramic armor from Rheinmetall, which protects the driver’s cab, crane operator and part of the equipment. 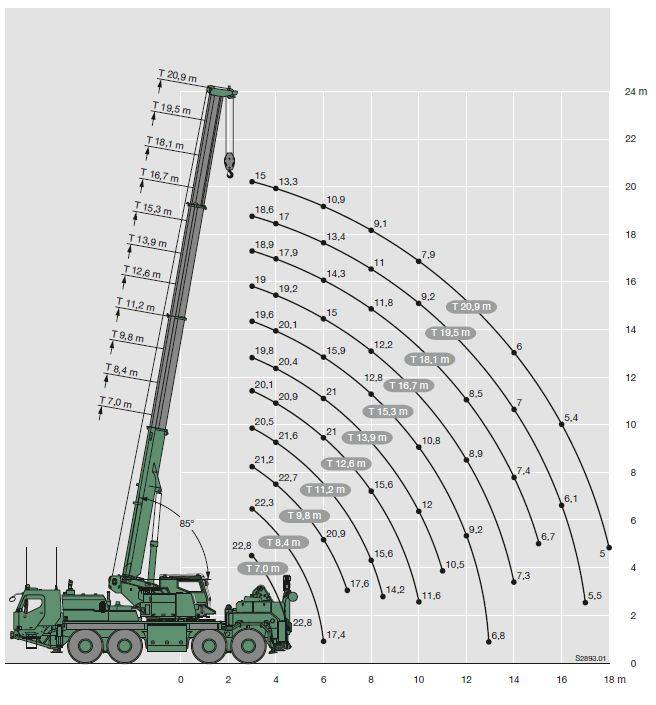 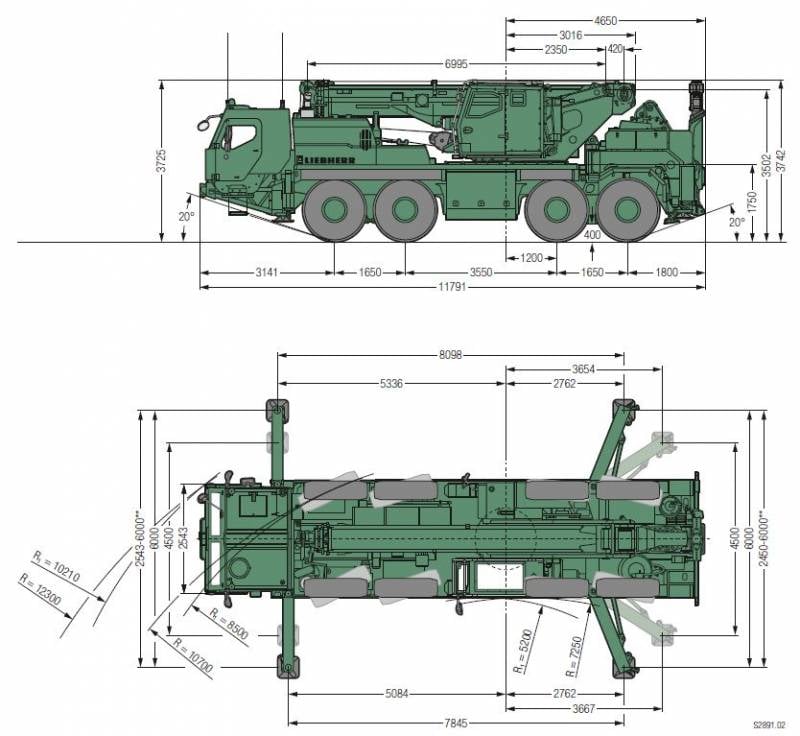 Despite the fact that the manufacturer positions military cranes as all-terrain vehicles, this is not entirely true. All you need to do is look at the layout, the generous front and rear overhangs, and the toothless road tires. Liebherr did not particularly bother developing a military crane from scratch, but simply adapted serial civilian equipment for the Bundeswehr, equipping it with local armor. On machines that must work under bullets and withstand the detonation of light IEDs, there is not even a centralized wheel inflation system. Liebherr G-BKF and G-LTM are equipped with bullet-resistant inserts that allow, in case of a tire break, to get out of the fire. And the problem of regulating tire pressure was solved in an original way: the driver stops before the off-road, gets out of the car and bleeds air from each wheel, and on a hard road he pumps up each wheel individually with the help of an onboard compressor. Despite the impressive technological level, off-road terrain is strictly contraindicated for Liebherr armored combat cranes – the smooth German autobahns are better.