Sverdlovsk. 1942 year. TsNII-48 is studying captured artillery shells as applied to the penetration action against domestic tanks. It was not the only organization involved in a detailed study of the lethality of German artillery. The Artillery Committee of the Artillery Directorate, the Main Armored Directorate and the Main Intelligence Directorate of the Red Army, to one degree or another, contributed to the research. Separately, the design bureau of plant No. 112 (Krasnoe Sormovo) worked, where, among other things, options for additional armor for the T-34 were worked out. Based on the numerous data collected by 1942, TsNII-48 in Sverdlovsk issued a secret report on topic No. 39 “Study of the penetrating action of German captured shells on the armor of our tanks and the development of measures to combat them.” At the very beginning of the material, we are talking about various types of shells used by the Germans against domestic armored vehicles, and about high penetrating action. It is for these reasons that all studies of Hitler’s shells in the Soviet Union received high-priority status. 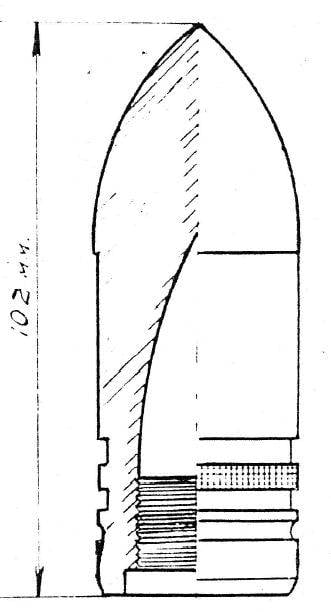 A sketch of one of the researchable 37-mm shells. Source: 1942 Report

German infantry and motorized formations, according to intelligence in 1942, possessed solid anti-tank artillery with a large selection of calibers. Soviet engineers conditionally divided German guns into three classes: the first with a caliber of up to 37 mm, the second – from 37 to 75 mm inclusive, and the third – more than 75 mm. In this classification, 22 types of artillery guns were counted, which included the captured Czechoslovak 37-mm M-34 anti-tank guns and 47-mm Skoda guns, as well as the Puteaux 47-mm anti-tank guns of the 1937 model. It is noted that the Wehrmacht also uses a 7.92-mm anti-tank rifle and even a 15-mm Czechoslovak heavy machine gun on armored vehicles. Despite such a wide arsenal, the Germans mainly used 37 mm and 50 mm calibers against Soviet tanks – simply because of the greater prevalence of these guns. With them, we will begin the story about the adventures of captured ammunition in the depths of the Soviet rear. 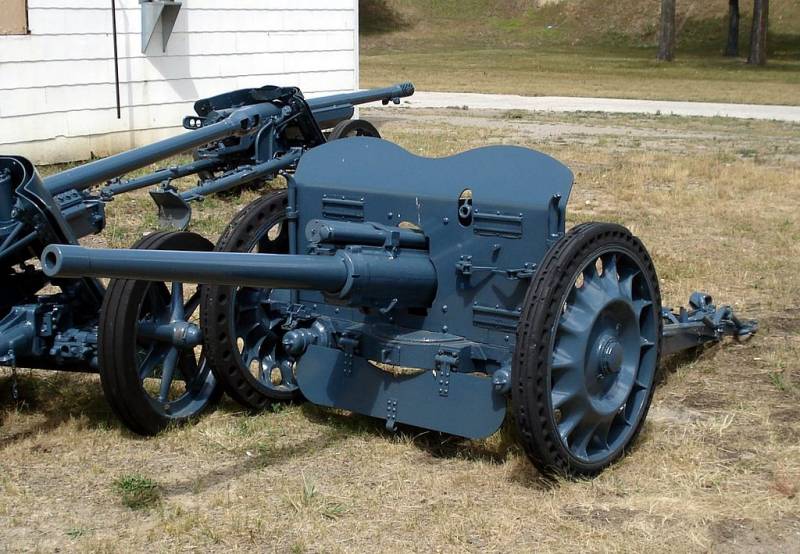 47-mm anti-tank gun Puteaux. One of the weapons, inherited by the Germans in France. Source: ru.wikipedia.org 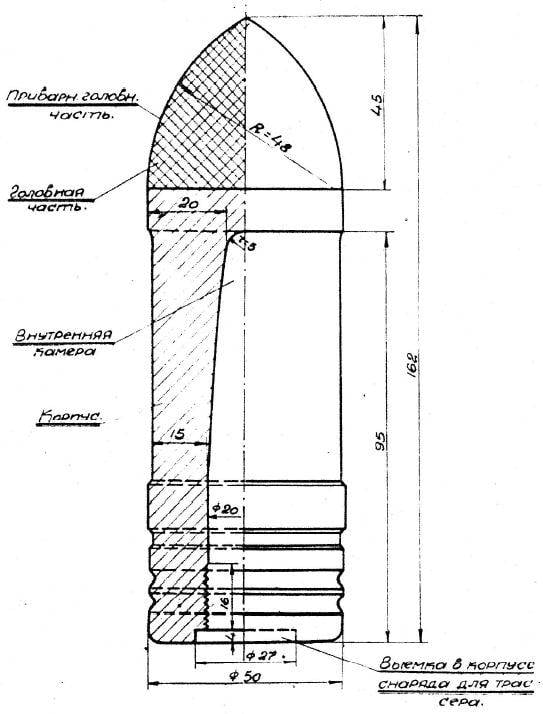 Initially, the shells were freed from the cartridge case and discharged. In 37-mm armor-piercing tracer shells, one could find 13 grams of phlegmatized pentaerythritol tetranitrate (PETN), which is quite sensitive to impacts. The fuses were usually bottom slow action. In the Czechoslovak 37-mm shells, TNT was occasionally used. The German armor-piercing tracer sabot projectile of the 1940 model did not have explosives at all, had a weight reduced to 355 grams and an initial speed of up to 1200 m / s. After the projectile was gutted from the explosives, it was cut along the axes of symmetry to remove the sketch and measure the hardness in different places. The first was a sharp-headed armor-piercing projectile with a caliber of 37 mm. As it turned out, the body of the projectile was homogeneous, turned from a solid forging of high-carbon chromium steel. At the same time, German gunsmiths specially hardened the head part for hardness up to 2.6-2.7 Brinell. The rest of the hull was more pliable – the hole diameter was up to 3.0 Brinell. A detailed analysis of the chemical composition of the alloy of the armor-piercing projectile showed the following “vinaigrette”: C – 0.80-0.97%, Si – 0.35-0.40, Mn – 0.35-0.50, Cr – 1.1% (main alloying element), Ni – 0.23%, Mo – 0.09%, P – 0.018% and S – 0.013%. The rest of the alloy was iron and trace amounts of other impurities. A much more effective 37-mm APCR projectile, more precisely, its core, consisted of W – 85.5%, C – 5.3% and Si – 3.95%. 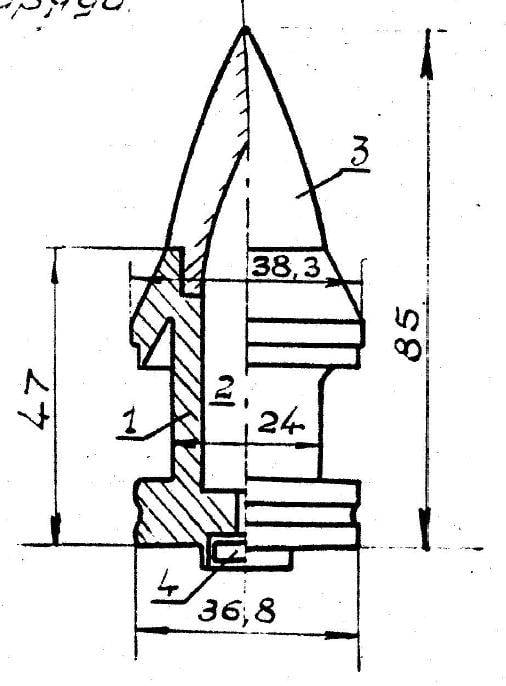 These were classic German coils, which, however, made a certain impression on the domestic testers. The high-hardness tungsten carbide core of the 37-mm projectile had a diameter of 16 mm and a high specific gravity with an overall lightening of the ammunition. Tests have shown that at the moment such a projectile hits the armor, the coil pan is crushed, being a kind of mandrel for the core, allowing it to penetrate the armor. Also, the pallet or coil, as the testers called it, ensured the core from premature destruction. The reel-to-reel shape of the projectile itself was chosen solely to save weight and was made of relatively mild steel with a hardness of up to 4-5 Brinell. The sub-caliber projectile was very dangerous, primarily for medium-hard armor, which was equipped with heavy domestic KV. When faced with the high-hardness of the T-34 armor, the fragile tungsten carbide core had the likelihood of simply collapsing. But this coil shape also had its drawbacks. Initially, a high speed of up to 1200 m / s, due to the imperfect aerodynamic shape, quickly faded away on the trajectory and at long distances the shooting was no longer so effective.

Next in line are 50-mm shells. These were larger ammunition, the weight of which could reach two kilograms, of which only 16 grams fell on the phlegmatized heating element. Such a sharp-headed projectile was heterogeneous in its structure. Its warhead consisted of high-carbon steel with a hardness of 2.4-2.45 Brinell, and the main body of the projectile was softer – up to 2.9. Such heterogeneity was achieved not by specific hardening, but by simple welding of the head part. The report indicated that this arrangement of the armor-piercing projectile ensured high penetration in homogeneous armor and especially in high hardness armor, which was the protection of the T-34. In this case, the place of contact welding of the projectile head is a localizer of cracks formed upon impact on the armor. Even before the war, TsNII-48 specialists tested similar German shells against domestic homogeneous plates and knew firsthand about the characteristics of enemy ammunition. Among the trophy armor-piercing shells were also reel-to-reel sub-caliber shells. Chemical analysis of the cores of such 50-mm ammunition showed that there are differences from 37-mm counterparts. In particular, in the tungsten carbide alloy there was less W itself – up to 69.8%, as well as C – up to 4.88% and Si – 3.6%, but Cr appears in a minimum concentration of 0.5%. Obviously, it was costly for the German industry to produce expensive cores with a diameter of 20 mm using the technologies used for 37-mm sub-caliber projectiles. If we return to the composition of steel of conventional sharp-headed 50-mm armor-piercing shells, it turns out that it does not differ much from its younger counterparts: C-0.6-0.8%, Si – 0.23-0.25%, Mn – 0 , 32%, Cr – 1.12-1.5%, Ni – 0.13-0.39%, Mo – 0.21%, P – 0.013-0.018% and S – 0.023%. If we talk about saving the Germans already in the first years of the war, then it is worth mentioning the leading belts of shells, which were made of steel, although the technology required copper. 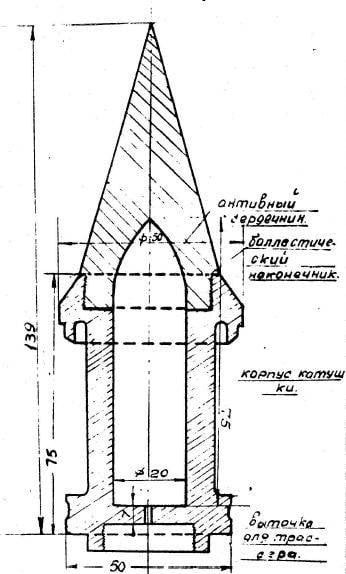 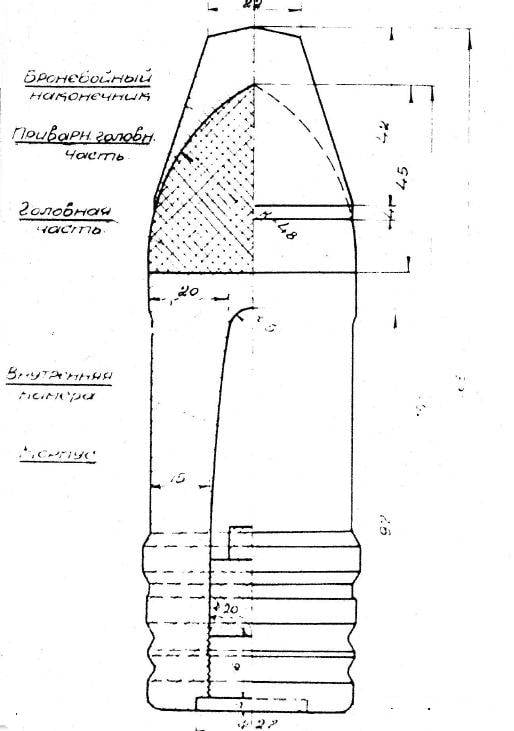 A novelty of its time: a 50-mm projectile with an armor-piercing tip. Source: 1942 Report

Subcaliber shells appeared in Germany in 1940. The domestic military probably had some fragmentary information about them, but the meeting with shells equipped with armor-piercing tips came as a surprise to everyone. Such a 50-mm projectile appeared already during the war and was intended directly for the sloping high-hardness armor of Soviet tanks. The ammunition had a high hardness welded head, on which an armor-piercing tip of chromium steel with a hardness of up to 2.9 Brinell was put on top. As they say in the report:

The presence of an armor-piercing tip increased the effectiveness of the action of an armor-piercing projectile, on the one hand, due to the preservation from destruction, the projectile came to life at the first moment of impact on high hardness armor (read: T-34 parts), on the other hand, it increased the ricocheting angle. When hit at large angles (more than 45 degrees) from the normal, the tip “bites” the armor, as it were, helping the projectile to normalize to the plate under the action of the resulting force pair. Simply put, the projectile turned slightly on impact and attacked the tank at a more comfortable angle. At TsNII-48, these conclusions were also confirmed by shelling the armor of Soviet tanks in laboratory conditions.

After careful research of 37-mm and 50-mm projectiles of various designs, test engineers began field firing. For this, the resources of two training grounds were attracted: the Sverdlovsky training ground of the artillery plant No. 9 and the Gorokhovetsky artillery scientific testing experimental ground (ANIOP) in the village of Mulino. The organizers were specialists from TsNII-48 and the Artillery Committee of the Artillery Directorate of the Red Army. For this work, in 1942, high-hardness armor plates with a thickness of 35 mm, 45 mm and 60 mm, as well as an average hardness with a thickness of 30 mm, 60 mm and 75 mm, were prepared. In the first case, the protection of the T-34 tank was imitated, in the second – the KV.