German submachine gun MP-18. In the mid-twenties, Estonia had a noticeable amount of such weapons. Photo Wikimedia Commons

Many samples of small arms were distinguished by a special design that could attract attention. Others did not stand out in this respect, but had a curious history. The latter include the Estonian submachine gun Tallinn-Arsenal. He was a slightly modified copy of an existing specimen, but had a very interesting “biography”.

Until the mid-twenties of the last century, independent Estonia did not have its own submachine guns. In service there were a number of German-made MP-18 products, but the development of their own weapons of this class was not carried out and, probably, was not even planned. But the situation changed dramatically at the end of 1924.

On December 1, 1924, the Estonian underground, associated with the Comintern, attempted an armed uprising. Several military infrastructure was attacked. One of the goals of the communists was a military school on the street. Tondi. It was planned to seize weapons there for further battles.

However, this part of the plan did not work. One of the cadets of the school managed to take a comfortable position and prevented the attackers from breaking through to the second floor with dense fire. While he single-handedly held the defense, the comrades managed to arm themselves and come to the rescue. The cadets successfully fought off the attack and prevented the loss of weapons.

According to available sources, the cadet from the second floor of the barracks was armed with a “9mm automatic pistol”. The exact type of this item is unknown and dispute is possible. According to the widespread version, the underground fighters were stopped by fire from an MP-18 submachine gun – such a weapon was in Estonia and could be used in battles on December 1.

The battle for the second floor of the barracks showed the practical value of automatic weapons chambered for a pistol cartridge. A fundamental decision was made on the need to produce our own submachine guns for arming the army.

External differences between the two samples are minimal. Photo wwii.space

In 1925-26. the designers of the Tallinn Arsenal, under the leadership of Johannes Teiman, developed the first Estonian draft of a submachine gun. Rather, it was about copying the German product MP-18 / I – but with noticeable modifications, taking into account the wishes of the army and the technological capabilities of the enterprise.

Later, according to the name of the developer, the new weapon was named Tallinn-Arsenal or Arsenali Püstolkuulipilduja (“Arsenal’s submachine gun”). Also, in some sources, the designation M23 is found, allegedly indicating the year of the creation of the weapon. However, this version does not correspond to other known data and is probably the result of some confusion.

Soon, the new model was successfully tested and was recommended for adoption. In 1927, an order for serial production appeared in the interests of the Estonian army. A few months later, the first serial products were sent to the customer.

At its core, the Tallinn-Arsenal submachine gun was an MP-18 / I product with certain modifications. The main design features and operating principles have not changed. At the same time, the changes made had little effect on the combat and operational characteristics. 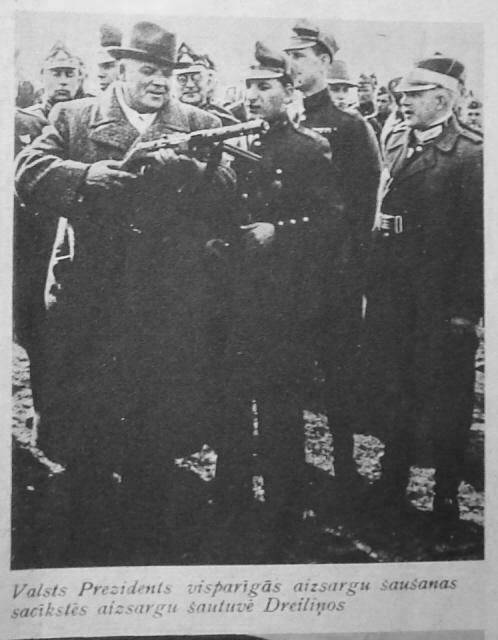 The country’s leadership is getting acquainted with the new weapon. Photo Forum.axishistory.com

Like the base model, the Tallinn-Arsenal was an automatic weapon chambered for a pistol cartridge using the free-action principle. The design was based on a cylindrical receiver connected to a perforated barrel casing. This whole assembly was fixed on a wooden bed. The box magazine was fed into the receiver on the left.

A simple system of a massive bolt and a reciprocating mainspring was placed inside the receiver. The trigger mechanism provided locking the shutter in the rear position; the shooting was carried out from the rear sear. A separate fuse was still missing – the shutter was blocked due to the L-shaped branch of the handle groove.

At that time, Estonia was armed with an FN M1903 pistol chambered for 9×20 mm Browning Long. Wanting to ensure the unification of small arms, the army demanded to recycle the German submachine gun for “its” ammunition. A new extended 40-round box magazine was made for such a cartridge. As before, he was adjacent to the weapon on the left. The receiver and latch have not changed. 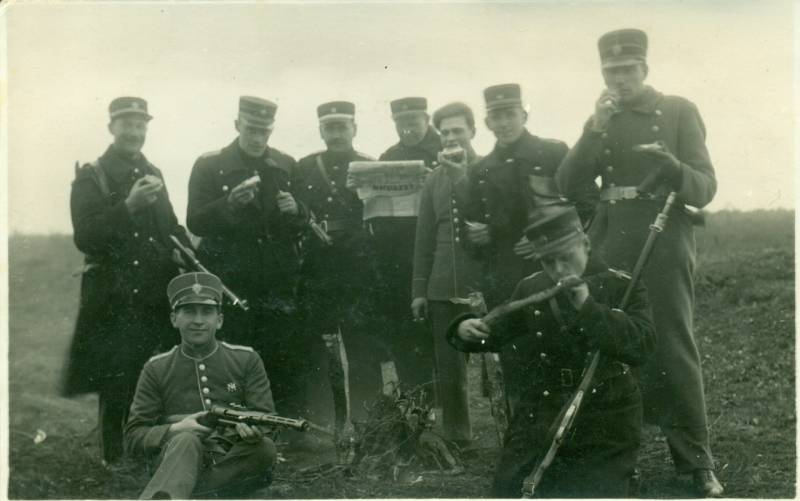 Soldiers at a halt. Only one soldier received automatic weapons. Photo Forum.axishistory.com

The original chamber was slightly lengthened to accommodate a new 20mm sleeve, and a groove was added for the protruding rim. We recalculated the parameters of the moving parts, taking into account the energy of the new cartridge. The barrel was extended to 210 mm, and on the outside, valleys appeared on it for better cooling. On the original MP-18, the barrel was covered with a casing with many round holes. The Estonian-made casing had several longitudinal rows with three oval holes in each.

Some sources mention the refinement of the trigger mechanism, which provided the possibility of choosing firing in single or bursts. However, these data are not confirmed.

Tallinn-Arsenal differed from the MP-18 / I in the shape of the wooden box. The gunsmiths dropped the pistol grip on the neck and made some other minor changes.

One of the surviving museum “Tallinn Arsenals”. Photo Forum.axishistory.com

The resulting submachine gun was slightly shorter than the base sample (809 mm versus 815 mm), but heavier – 4.27 kg versus 4.18 kg (without a magazine). Due to the refinement of the automation, the rate of fire was brought to 600 rds / min. Effective range of fire remained the same.

The Arsenali Püstolkuulipilduja submachine gun was adopted in 1927, and then an order for the serial production of such a weapon appeared. The weapon was to be produced by a developer enterprise. The Estonian army needed a large number of new automatic weapons, but due to limited funding it had to restrain its desires. Soon there was a new order, this time from the police.

The production of submachine guns lasted only a few years and was phased out in the early thirties. During this time, the army and police received no more than 570-600 new model submachine guns from the Tallinn Arsenal. However, against the background of the total number of law enforcement agencies, even this amount of weapons did not look unacceptably small.

Since a certain time, Estonia has been trying to bring its “development” to the international market. Individual copies were transferred to third countries for testing. However, orders were not followed, and the only buyer of Tallinn-Arsenal was its own security forces.

Tallinn-Arsenal’s serial products were distributed between army units and police departments. Due to the insufficient number, they did not become the main weapon of the army and did not supplant rifles, but they still improved the overall firepower of a number of units.

The new weapon was actively used at shooting ranges and during field exercises – and demonstrated all the positive qualities of automatic systems. However, it quickly became clear that it has a number of problems. The extended magazine proved to be unreliable and caused feed problems. The grooves on the surface of the barrel did little to help cooling, but made production more difficult. There were also other disadvantages. 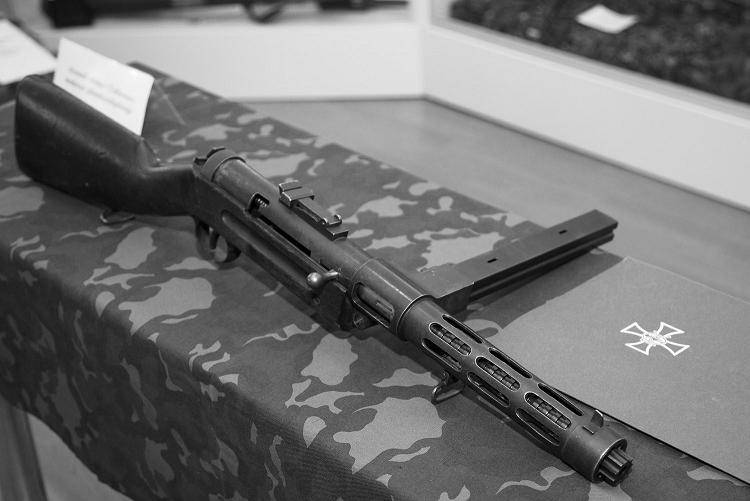 He is, a view from a different angle. Photo Forum.axishistory.com

Finally, by the mid-thirties, the design of the weapon became obsolete. Tallinn-Arsenal was based on a submachine gun from the First World War, and since then, the idea of ​​weapons has managed to move forward. Both the MP-18 and its Estonian copy could no longer compete with modern and promising models.

In the mid-thirties, the Estonian army began searching for a new submachine gun to replace Tallinn-Arsenal. These activities ended in 1937 with the adoption of Finnish-made Suomi KP-31 products. At the same time, they signed a contract for the supply of imported weapons. Before joining the USSR, independent Estonia managed to receive 485 ordered submachine guns.

In connection with the adoption of a new model, the old weapons were decommissioned and began to be sold. Several submachine guns were sent to Latvia. One sample went to Japan. Probably, the Estonian army planned to interest foreign armies and sell unnecessary weapons. Third countries did not want to buy it – but almost all of the remaining submachine guns were acquired by some private company.

One of the most interesting episodes in the “biography” of Estonian submachine guns is probably connected with the activities of this company. A certain number of such weapons – according to various sources, from dozens of pieces to all the remaining products – soon ended up in Spain, in the hands of Republican fighters. It is not known exactly how and by what routes the decommissioned items got from Estonia to Spain.

The last mentions of Tallinn Arsenal in the armies and on the battlefields date back to the Spanish Civil War. Apparently, later this weapon was not used by anyone. The samples remaining in storage were scrapped, although some of the items managed to survive and get into museums.

First and second
In terms of design and technology, there was nothing remarkable about the Tallinn-Arsenal submachine gun. However, this sample had a very interesting history. It was the result of Estonia’s first attempt to launch its own production of modern automatic weapons, even with the use of someone else’s design.

This experience was not entirely successful, and after a few years, their own submachine gun was replaced with an imported one. However, work on the independent creation of weapons did not stop. In the late thirties, Tallinn Arsenal developed a submachine gun known as the M1938.