In the previous part of the story, the story stopped at sub-caliber shells, or “coils”. But in the arsenal of anti-tank artillery there were other types of ammunition. Among the trophies were single 75-105-mm HEAT shells, the principle of which is described in the report as follows:

“By means of a spherical-goblet-shaped notch in the explosive made in the head part, the blast wave is directed and, concentrating on a small area, acquires the ability to penetrate armor.”

There is not a word in the text about the material lining the recess, and the whole description is based on the concentration of the shock wave breaking through the armor barrier. The explosives of such shells consisted of 45% TNT and 55% RDX, mixed with paraffin. Among the advantages, researchers of German projectiles note the lack of dependence of the lethality of ammunition on speed. In general, the Germans write in the manual that it is possible to shoot at tanks with cumulative shells from a distance of up to 2000 meters. It was not possible to verify such a statement in Sverdlovsk, since the lack of trophy shells forced them to hit targets for sure and from minimal distances. The cumulative ones were generally not enough for a full-fledged test on Soviet armor. 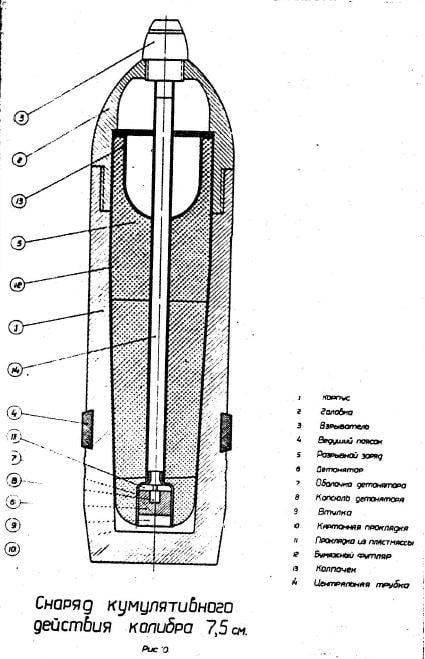 As already mentioned in the first part of the material, two types of armor were prepared for testing at the test site of plant No. 9 and ANIOP (Artillery Research Experimental Test Site) in Gorokhovets. High-hardness alloys were represented by grade 8C, which became the main armor for T-34 tanks, and medium-hard alloys were FD-6633 steel for the KV series. By the way, the industry name of the armor for the T-34 is silicon-manganese-chromium-nickel-molybdenum steel, grade 8C. In Sverdlovsk, three 8C armor plates with a thickness of 35 mm, 45 mm and 60 mm and dimensions of 800×800 mm and 1200×1200 mm were subjected to shelling. In the same series, two huge plates of 3200×1200 mm in size from armor of medium hardness with a thickness of 60 mm and 75 mm were fired upon. At the Gorokhovets test site, two plates of medium hardness 30 mm and 75 mm, 1200×1200 mm in size and a 45-mm plate of the same size made of 8C steel, were tested by shelling.

A small excursion into armor theory. Homogeneous armor of high hardness due to its relatively low plasticity was used only to protect against bullets and shells of small-caliber artillery (projectile caliber 20–55 mm). With the high quality of the metal, providing increased viscosity, homogeneous armor could also be used to protect against 76 mm projectiles. It is the latter property that was successfully implemented by domestic gunsmiths on medium tanks. In Germany and its allies, high hardness armor was also used to protect all tanks adopted at that time (T-II, T-III, T-IV, etc.). All gun and machine-gun shields with a thickness of 2-10 mm, helmets and individual protection shields with a thickness of 1.0 to 2.0 mm were also made of high hardness armor. In addition, high-hardness armor found wide application in aircraft construction, in particular, it was used for armoring aircraft hulls. Homogeneous armor of medium hardness, having a higher ductility in comparison with armor of high hardness, could be used to protect against larger shells of ground artillery – caliber 107-152 mm (with an appropriate thickness of armor protection) without unacceptable brittle metal damage. It is noteworthy that the use of armor of medium hardness to protect against bullets and shells of small-caliber artillery turned out to be impractical due to a decrease in penetration resistance at a reduced hardness. This was the reason for choosing the 8C high-hardness armor as the basis for the T-34. The most effective use of homogeneous armor of medium hardness was recognized for protection against projectiles of caliber from 76 to 152 mm.

The chemical composition of steel 8C: 0.21–0.27% C; 1.1-1.5% Mn; 1.2-1.6% Si; ≤0.03% S; ≤0.03% P; 0.7-1.0% Cr; 1.0-1.5% Ni; 0.15-0.25% Mo. Armor made of 8C steel had a number of significant drawbacks, mainly depending on the complexity of its chemical composition. These disadvantages included a significant development of fracture layering, an increased tendency to crack formation during welding and straightening of parts, as well as the instability of the results of field tests and a tendency to brittle damage in the case of inaccurate adherence to the armor manufacturing technology. 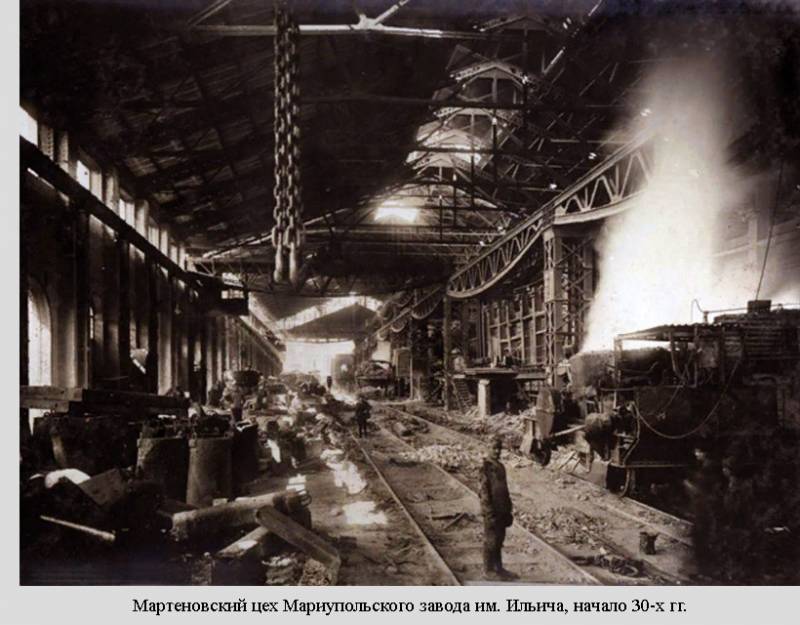 In many respects, the difficulties in achieving the required characteristics in the 8C grade armor metal lie in the increased silicon content, which led to an increase in fragility. The technology for the production of 8C armor while maintaining all the requirements was inaccessible in peacetime, not to mention the war period of the total evacuation of enterprises.

Homogeneous armor of medium hardness, to which FD-6633 belongs, was developed in the USSR at the end of the 30s in the armored laboratory No. 1 of the Izhora plant, which later formed the basis of the TsNII-48, created in 1939. Having no experience in the development of armor of this class, the Izhorian metallurgists fully mastered production in 2 months. It must be said that making armor for heavy tanks was easier than for medium T-34s. Minor deviations from the technological cycle did not cause such a serious drop in quality as in the case of 8C. After all, medium-hard armor made any machining after hardening much easier. An exceptional advantage of medium-hard homogeneous armor was also low sensitivity to welding cracks. The formation of cracks during welding of shells made of armor of this type was a rare case, while when welding shells made of 8C armor, cracks were formed at the slightest deviations in technology. This was encountered quite often on the T-34, especially in the early years of the war.

The projectile resistance of the domestic high hardness armor was higher than that of the average hardness. This was shown by the pre-war tests. For example, for complete protection against blunt-headed 45 mm projectiles, medium-hard armor 53-56 mm thick was used, while in the case of high-hardness armor, the minimum thickness that provides protection against these projectiles is 35 mm. All this together gives considerable savings in the weight of the armored vehicle. The advantages of 8C armor are further enhanced when tested with sharp-headed projectiles. To protect against such projectiles with a caliber of 76 mm, the minimum thickness of rolled armor of medium hardness was 90 mm, for protection against a sharp-headed projectile with a caliber of 85 mm, the minimum thickness of rolled armor of high hardness was 45 mm. More than a twofold difference! Despite this overwhelming advantage of 8C steel, medium-hard armor is rehabilitated in testing at high angles when toughness comes to the fore. In this case, it allows you to more successfully resist the powerful dynamic impact of the attacking ammunition. 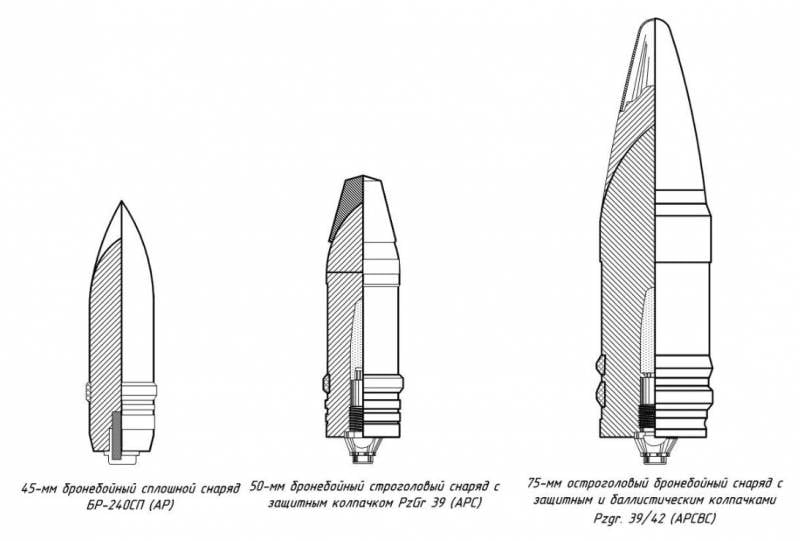 In 1942, domestic testers did not observe a wide variety of captured ammunition, so the firing ranges were limited to 50 and 150 meters with a standard charge of gunpowder. In fact, there were at best 2 shots for each sample, which slightly spoiled the reliability of the results. The important parameters for the testers were the PTP angle (ultimate armor back strength) and PSP angle (armor penetration limit). The angles of meeting the armor with the projectile were 0, 30 and 45 degrees. A feature of the tests at the test site in Gorokhovets was the use of reduced charges of gunpowder, which made it possible, with a constant distance of 65 meters, to simulate various projectile speeds. The reloading of German ammunition was carried out as follows: the muzzle was cut off from the sleeve and the projectile was inserted into the muzzle of the gun, and the charge was placed separately behind it. For comparative tests with trophy armor-piercing and sub-caliber ones, 76-mm domestic cumulative projectiles were fired at a 30-mm plate made of high-hardness armor and 45-mm medium-hard armor.

The intermediate results of testing captured artillery shells were the expected better durability of high-hardness 8C steel in comparison with medium-hard armor FD-6833. So, the angles of the rear strength limit, which guarantee the protection of the crew and units, for 60-mm armor of medium hardness are 10-15 degrees more than for the same thickness of high hardness. This is true for German APCR shells. That is, all other things being equal, the plates of the FD-6833 armor had to be tilted at a greater angle to the attacking projectile than the 8C armor. In the case of using a 50-mm sub-caliber projectile, medium-hard armor in order to maintain the rear strength, it was required to tilt 5-10 degrees more than the 8C plates.

At first glance, this is a bit of a paradox, considering that the 8C was intended for medium tanks, and the armor of medium hardness was for heavy ones. But it was this factor that determined the high projectile resistance of the T-34, of course, subject to the observance of all the technological subtleties of the manufacture of armor and the tank hull.

But with German armor-piercing shells for 8C armor, the situation was not so rosy: the PTP and PSP angles for a 60-mm high-hardness plate were already 5-10 degrees greater than for medium-hard armor. When the turn came to cumulative domestic 76-mm shells, it turned out that they were not able to hit armor up to 45 mm thick. The given charge simulated the distance of a shot at a target of 1.6 km. Captured cumulative projectiles, due to insufficient supply, were not included in the study.